Pyongyang Railway Station is an international, domestic, and municipal travel hub in North Korea and Pyongyang, and along with Pyongyang Sunan International Airport North Korea’s gateway to the World serving international trains to Beijing via Dandong, and Moscow via Rason Special Economic Zone.

The railway station has a history of over 100 years- the original was built during the Japanese occupation as part of the Gyeongui (Seoul–Sinuiju) Line- the current building dates from 1958.

Pyongyang station is on the border of the Central and Pyongchon Districts at the meeting of four roads;

Changgwang Street where Koryo Hotel is located where most of the foreign delegations stay.

Sosong Street that connects the Central District with Potonggang District.

The rather busy square in front of the railway station is also the home of Pyongyang’s first large public TV screens, local people often crowd around this screen on spring and summer evenings to chat and watch a bit of TV.

Most tourists, arriving or departing, will board or disembark their KITC vehicle here, although walking to or from certain locations from/to here is also possible (more on it in our ‘Tips’ section).

If you take a chartered tram this will be the terminus of your ride, while this is also the place where the chartered trolleybus tours stars.

Just a couple of minutes from the railway station is Yonggwang (‘Glory’) Station on the Chollima Line of Pyongyang Metro, one of the five stations where foreign tourists can access the metro system (NB: this does not mean that more stations cannot be visited, though, Koryo Tours can arrange complete Pyongyang Metro tours).

In front of the train station, is the grand circle terminus of Pyongyang’s tramline No. 1 heading to Kwangbok Steet.

East of the station is one of the major trolleybus depots of Pyongyang giving convenient access to the rest of Pyongyang.

The ‘East Square’ of the railway station is the parking lot for ‘commuter buses’ that provide non-stop services to the major residential neighbourhoods of Pyongyang like Tongil Street. 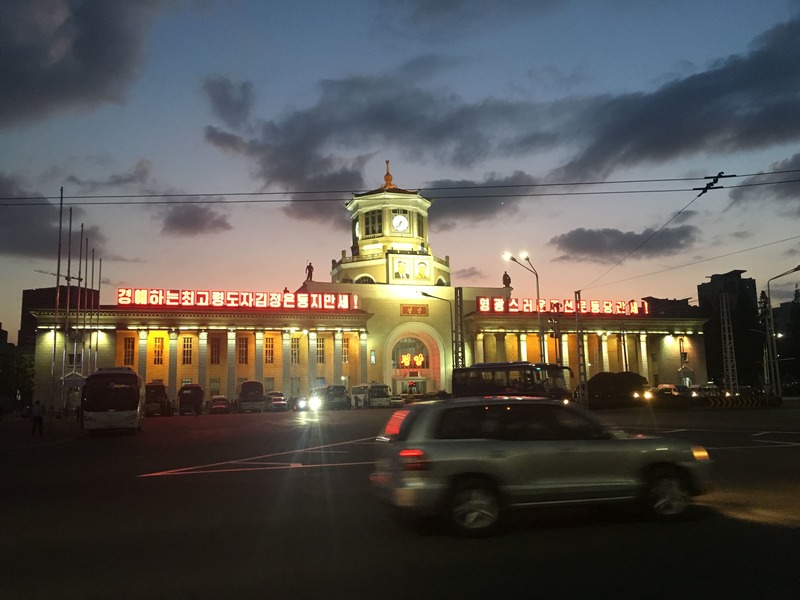 Although Pyongyang Station is the major railway hub for the country providing national train services to major cities like Kaesong, Haeju, Nampo, Pyongsong, Hyangsan, Wonsan, Hamhung, Paektusan, and Chongjin; only international trains are accessible for foreigners.

The daily Pyongyang-Sinuiju-Dandong train (with daily connection to Beijing in Dandong and direct carriages to Beijing on Monday, Wednesday, Friday, and Saturday) departs from here at 10:25, while arrival from China is at 18:45 every day.

This is the only reliable train line in North Korea with no major delays, usually getting the passengers to their destination more or less on time (during busy periods, the immigration procedure in China can take ages, forcing passengers to rush to be able to catch their connection to Beijing).

The train to Moscow via the Russian Far East and Siberia is an amazing experience but it requires flexibility and patience.

There is also a monthly train to Khabarovsk.

There are also six trains departing to Moscow each month, connecting to the Trans-Siberian Railway in Ussuriysk.

The official travel time between Pyongyang and Rason/SEZ (where there is a 1-3 night layover before heading over to Russia) is approximately 26 hours but it’s more likely that it will take roughly 32 hours (up to 48 hours is the extreme our customers experienced so far).

Once on Russian soil, the schedule becomes reliable.

The train reaches the Russian capital in 7 days after leaving North Korea. In Ussuriysk (just a bit under 9 hours from Tumangang, DPRK), it’s possible to catch connecting trains to Vladivostok, arriving in the ‘Lord of the East’ early next morning after your departure from North Korea.

If you’re on a group tour chances are high that you will be travelling with a Koryo Tours Tour Leader from Beijing which will make the simple even simpler.

Your local North Korean guides will wait for you on the platform.

You will need your passport and your group ticket for the train (your guide will ask for it) to be able to exit the station. Your ticket will be checked by the station staff while armed soldiers might look at your passport.

Exiting the train station might be the biggest achievement of your trip, as they require arriving passengers to line up according to group and most of the people act like if they were rushing to get on the last helicopter out of Saigon (or replaying the events of the Hungam evacuation of 1950 to be more stylistic and appropriate to North Korea!).

Once out of the station building, you will be guided to your designated KITC vehicle and transferred to the hotel.

You will arrive at the station approximately 1 hour prior to your train’s departure.

After you get your luggage and say goodbye to the driver, your guides will take you to the Waiting Room or directly to the train, depending on when the station staff decides to open the platform.

You will need your passport to access the platform (your guides will have your train ticket).

The guides will guide you to your carriage and point out your berth. After you settle down you can get off the train and have your last chats with your guides and have your teary farewells, last photos, etc.

Circa 5 minutes to departure you will be ordered back on the train.

As the train pulls out of Pyongyang Station, the guides will wave to you as your train slowly disappears from their sight.

Pyongyang Station was opened in 1906 as a part of the Gyeongui Line that once connected Seoul (that was named as Gyeongseong during Japanese rule) with Sinuiju on the Chinese border.

A new station building was built in the 1920s resembling the old Seoul Station. This was destroyed during the Korean War (1950-1953).

The station as we know today was rebuilt in 1958 in the ‘Stalin Baroque’ style. It remains one of the most recognisable buildings in Pyongyang to this day. 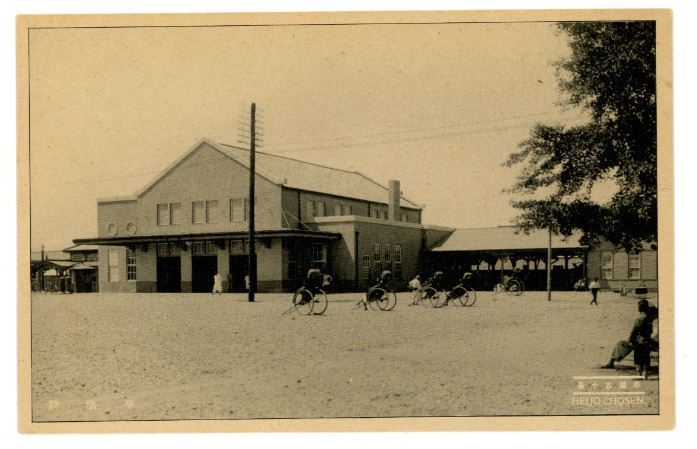