The Yanggakdo Hotel is one of North Korea's best hotels due to a lively mix of people that stay here and an excellent range of leisure activities.

Chances are if you visit as a tourist you will be staying here. But put aside fears of being in a ‘tourist’ hotel, ignore the oft-repeated claim “they put you on an island so they can control you” (you can’t go out of any hotel unaccompanied anyway, and you can choose where to stay), and make the most of this place which has the most leisure activities of any hotel in the country.

Yanggakdo Hotel is the most fun place to stay. It is lively and mysterious, hosts normal folks, ‘friendship’ groups, trade and journalism delegations, and much more besides. The Yanggakdo Hotel sits at the northern tip of Yanggak Island, located in the Taedong River in Pyongyang.

The Taedong River flows through the centre of Pyongyang. It is one of the longest in Korea at 439km and stretches from the Rangrim Mountains deep in the interior before emptying into the West Sea (known outside as the Yellow Sea). Broadly heading from east to west it takes a sharp zig south at the north end of Pyongyang and then cuts west again at the bottom end of the city.

Multiple islands of various sizes sit at various points of the river and among the most important and well-known is the ‘Sheep Horn Island’, Yanggakdo (the ‘do’ suffix means ‘island’) – home of the most commonly-used hotel for foreign tourists in North Korea - the Yanggakdo International Hotel.

Future Scientist Street and Pyongyang Railway Station are both just a short drive away from the Yanggakdo Hotel, but not on the island itself. 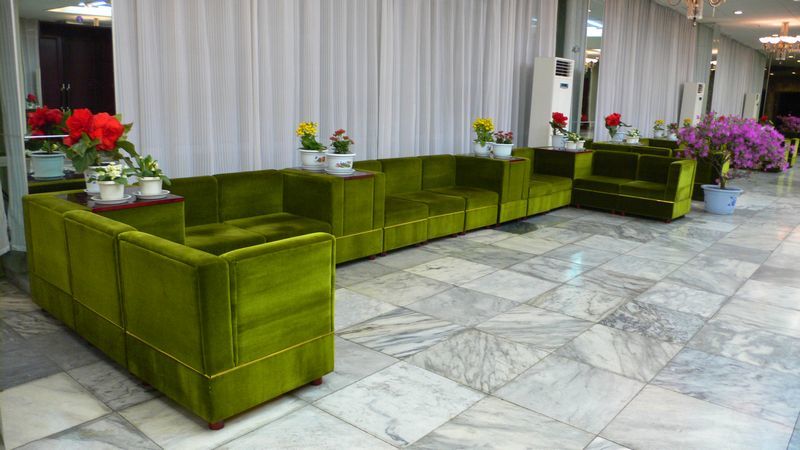 The Yanggakdo Hotel is the tallest operational hotel in the country. It is 47 storeys high and 170m above the river water below. The structure was reportedly built between 1986 and 1992 with involvement from France's Campenon Bernard Construction Company and opened in 1996.
Its exterior has been clad with a metallic material which gives it a silver/greyish finish.

The building is a mix of shapes – it looks rectangular side on, but from above is triangular. Perched on top is the revolving restaurant looking rather like a 'UFO' from the sixties has landed giving it a futuristic, albeit dated, look. 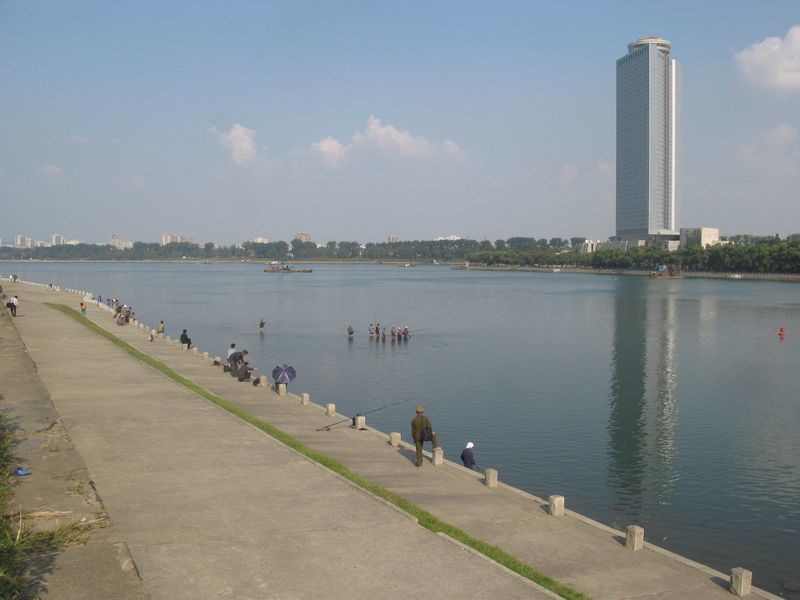 Tour guides and hotel staff will claim that the Yanggakdo Hotel has 1000 room. If this includes all the staff areas and cubby holes here and there then this may be true. Even so, it has the most capacity of any of Pyongyang’s Hotels and while that means that often it is very quiet and seems deserted there are also times (such as during the Pyongyang Marathon) that it can be full to capacity and thus very busy indeed.

On entry from the car park you find yourself in a rather shiny and new lobby.

This was renovated and reopened in April 2019, so far the renovations are just on this floor and the rooms remain as they were, in that particularly "timeless" North Korean style.

In the lobby, facing the reception desk you have on your left a tea shop, this is a bar and general sitting area, staff don’t mind if you sit here not ordering.

Then further left, past the entrance to the basement there is a large glass door to go through and on the left is the Yanggakdo Hotel bookshop (same stock as the Foreign Language Bookshop in the centre of Pyongyang), and opposite it is a souvenir shop.

Further down are banquet halls used at busy times, and at the end a little-used auditorium (looks like a mini-UN chamber) available for hire.

On the right side of the lobby is a small booth that can print documents, make copies, print photos, and behind it is a snack shop, then to the right some more is the telecoms centre (open 24 hours!) where you can make international phone calls (which you can do from your room too, though at more expense), and send postcards.

Next on the right is the Unjong Teahouse. This is a bar; it stays open as long as there are customers, serves food (Korean and western) and specialises in its home-brewed beer which at 3 EUR a pint is the most expensive in the country. This is the place many regulars in the Yanggakdo Hotel call their home and you should definitely stop in for a pint of the brown stuff if visiting or staying at the Yanggakdo!

The lobby floor also contains a range of restaurants; Rainbow Restaurant, Korean Restaurant, Chinese Restaurant, Restaurant Number 1, Restaurant number 2. They have different décor but are fundamentally the same more or less. You will have breakfast in one of these or in the banquet hall.

Taking the lifts down to level ‘1’ (the lobby is level ‘2’) you will find yourself in one of two basements of the Yanggakdo Hotel.

This one is leased to a company in Macau and it hosts a range of activities designed for the Chinese tourists who provide the majority population of the Yanggakdo Hotel at most times.

There is a restaurant serving normal Chinese food, an abandoned nightclub (closed around 2008) which at one time was the only one in the country, a massage centre where, rumour has it, gentleman’s services are provided by the Chinese staff there, and a small casino. 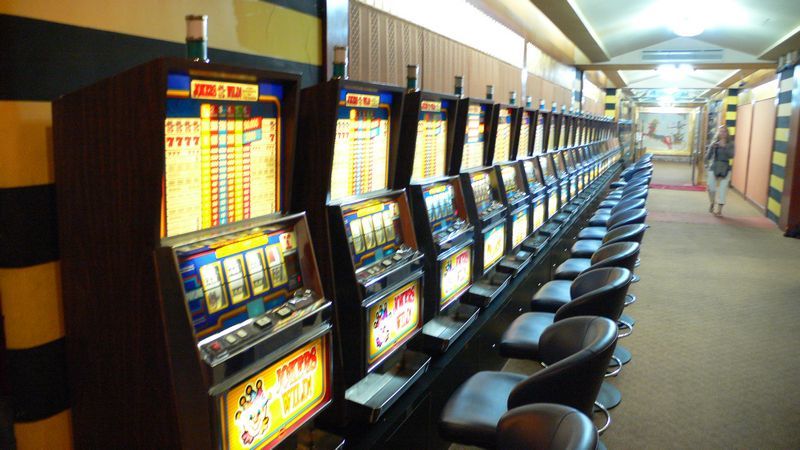 In the other basement you will find (in order from this entry point): Ping pong room, shoe repair, billiards room, ten-pin bowling (3 lanes), small shop, Karaoke room, cold noodle restaurant, swimming pool, then it all ends at a strange kind of Batcave entrance that opens into a small car park below the normal car park.

Almost all of these establishments listed have a bar, they are all staffed by Koreans (the other basement is the Chinese one, some people seem to get them confused), and are usually open until midnight or a little later, depending on how many customers there are.

As for the rooms, the Yanggakdo Hotel staff and basement staff use most of the lower floors (they will be mostly dark when the lift stops on those floors), and tour guides usually are accommodated around 11-13 floors.

Above that are for tourists.

As the lifts can be slow, and everyone tends to use them at the same time, it is not necessarily an advantage to being higher. Although, the views over Pyongyang are better of course. 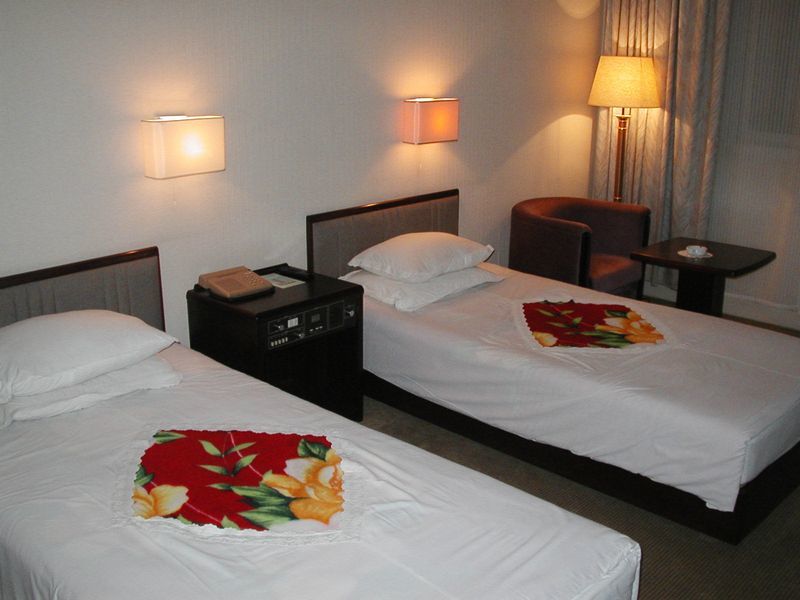 Most floors are made up of standard rooms with en suite, two single beds, a table and two chairs, fridge, water heater for hot drinks, etc.

Fairly standard and a bit dated but kept in good enough nick.

The furniture has been here since 1992 and the chairs could be better made. Remember, if you break them it is the fault of you alone, not the thousands of other people who used and misused them before you!

Suites also exist, and some go up to 4 rooms (although these are hardly ever used) in one. Most tourists will be fine with the normal room though seeing as you just spend the night in the Yanggakdo Hotel, not live there for a length of time.

The top floor is the revolving Restaurant.

It doesn’t always work but when it does you are in for a very slow one-hour revolution around Pyongyang.

The view is better at night, but photos are invariably terrible due to lights on the windows, so come at lunchtime for a meal, or come in the evening for a drink.

It closes around 11 PM usually though, unless there are a lot of customers. 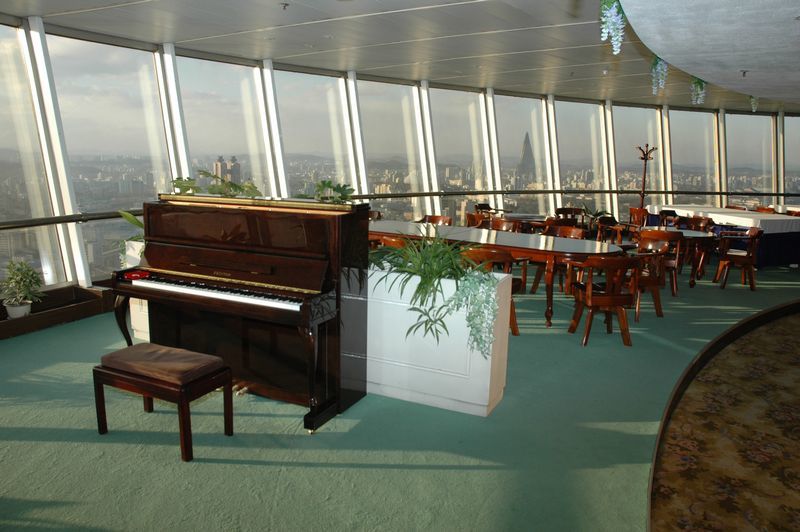 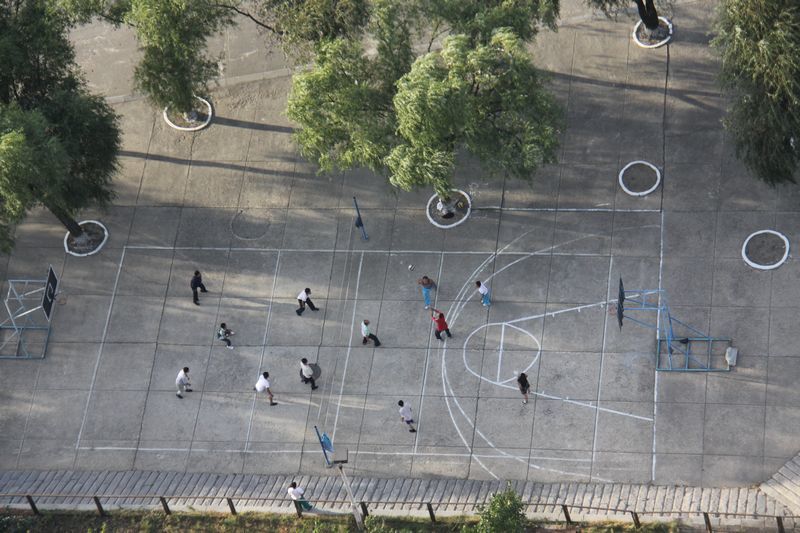 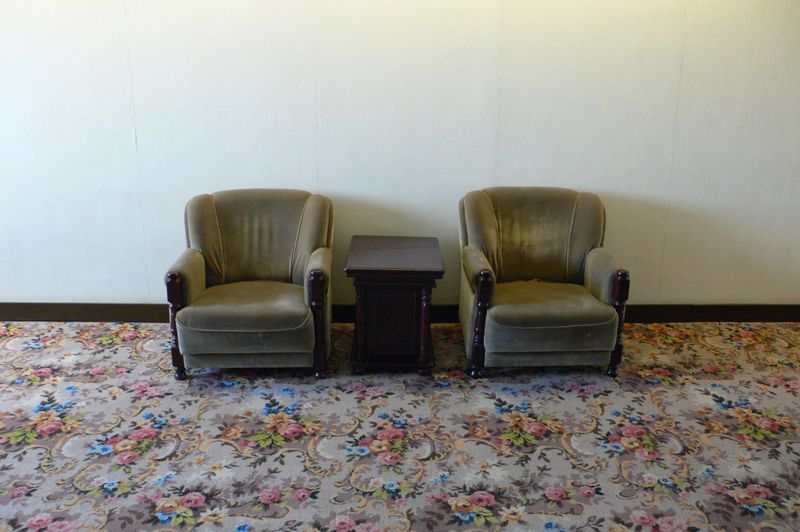 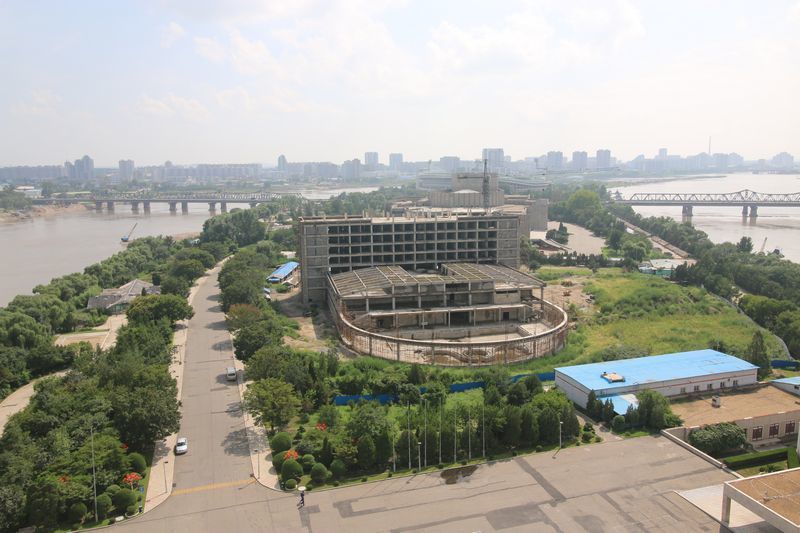