Vladikavkaz, Ruler of the Caucasus

Vladikavkaz (meaning ‘to rule the Caucasus’, not to be confused with Vladivostok; ‘to rule the East’) is a medium-sized city in the central North Caucasus, the capital city of the Republic of North Ossetia-Alania (not to be confused in turn with South Ossetia, a breakaway part of Georgia that is just across the mountains from here – confusing isn’t it!)
Founded as a fortress during Russia’s expansion into the region in the late 18th Century this was the main base for the imperial efforts in the Caucasus and became a major transportation and logistics hub for the Russians.

Prior to the arrival of Russians this area, like the whole of the Caucasus, passed through various empires and states’ hands. The Caucasus has a long and complex history but the people who give this republic its name, the Alans (now known as Alanians, or Ossetians) were an ancient tribe (who may have given the world the name ‘Iran’ of Scythians – for more detail look it up, we don’t have space here for the deep dive into history necessary for a full explanation!

Vladikavkaz is undoubtedly a cool name, but the city was actually known as Ordzhonikidze for two different periods (1931-44, and 1954-90) after the Georgian Bolshevik Sergo Ordzhonikidze (a man with a complex and fascinating history and career, well worth reading more on).

Vladikavkaz has also seen plenty of military action; from the time of its creation as a front-line fort of course, but also during the Russian Civil War when it changed hands between Reds and Whites a couple of times, and in World War 2 when the Wehrmacht reached the suburbs of the city before being forced back.

One of the most pleasant and ‘European’ of cities in the North Caucasus Vladikavkaz is not a difficult place to visit and spend time. An easy city centre to walk around, very well-equipped with nice hotels, a wide range of restaurants and cafes, pedestrianised streets, excellent nightlife, sports clubs, fun parks and a great array of statues. This is a pleasant place indeed and very highly recommended to any visitor to the area.

Top Tip – if heading through here to Chechnya and if you’re the kind of person who needs a drink every now and then it is worth stocking up here. Chechnya is largely a dry Republic (with some exceptions) and Vladikavkaz is very much not – plenty of good wine, vodka, etc can be found here. Much of it locally made.

While looking very much like a ‘Russian’ city the population is actually majority Ossetian, with large Russian, Armenian, Georgian minorities. The main religion is Orthodox Christianity but Assianim (a kind of revived Ossetian paganism) is increasingly popular. Many other regional religions are also practised here (see below for more)

For any visitor travelling in the North Caucasus, we would advise that Vladikavkaz is on the ‘do not miss’ list – a really interesting place with lots to see and do, well-located for trips to other parts of the region. 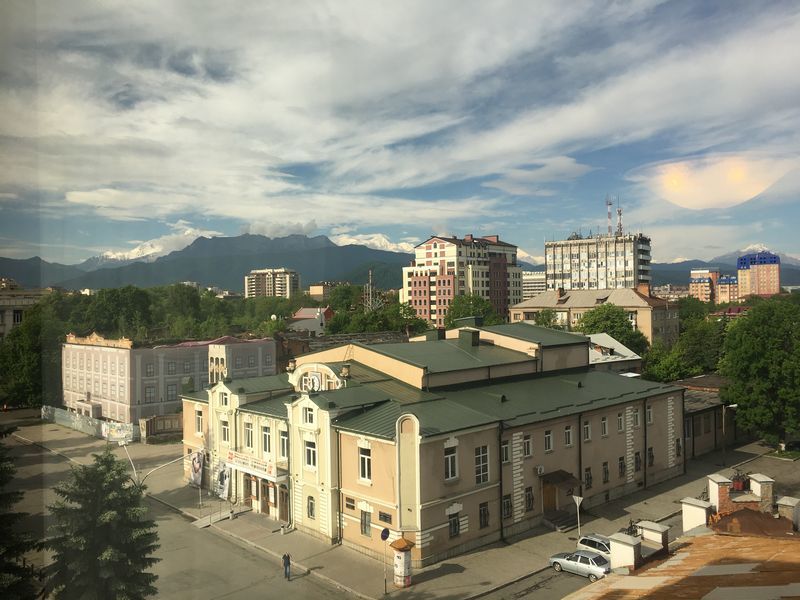 Vladikavkaz Airport (OGZ) is actually not in the city at all, it is in Beslan, around 60km to the north, and commonly referred to as Beslan Airport (the previous name). Taxis, buses, marshrutkas all make the run from this airport to Vladikavkaz though).

There is a train station with departures all across the region and to the major cities of Russia. The train tracks were laid not long after the city was established properly and also the famed Georgian Military Highway which runs into the southern Caucasus stars here so the road network is pretty good as well. This Highway is not fully open to civilians still, but Vladikavkaz’s history as a transport hub means that it is very well connected to everywhere around it.

Getting from Vladikavkaz to nearby cities such as Nalchik, Grozny, Beslan, and so on is best done by Marshrutka. There are two main stations in the city and they are easy to locate and use. We recommend this as the best way to get around for sure.

Within the city itself there are buses of course and a more than 100-year-old tram system.

Trolleybuses also exist and a particularly good route is the one that loops around Mira Boulevard, the central pedestrianised street of Vladikavkaz. It is best to stay in a hotel near to this main road, this is where great restaurants, cafes, nightspots can all be found, as well as transport hubs and access to all the spots around the city to walk to. People promenade around here all day and night, all flavours of life can be tried, it is a great spot for relaxing, hanging out, people watching and all the rest. Make this area your base!

A lovely city centre park, very Russian in that the pathways are somewhat crumbling and there are some curious bits of public art and sculpture dotted about, but the scenery along the Terek River is nice, there is a small funfair to enjoy, and this is the kind of place to mix with all kinds of locals 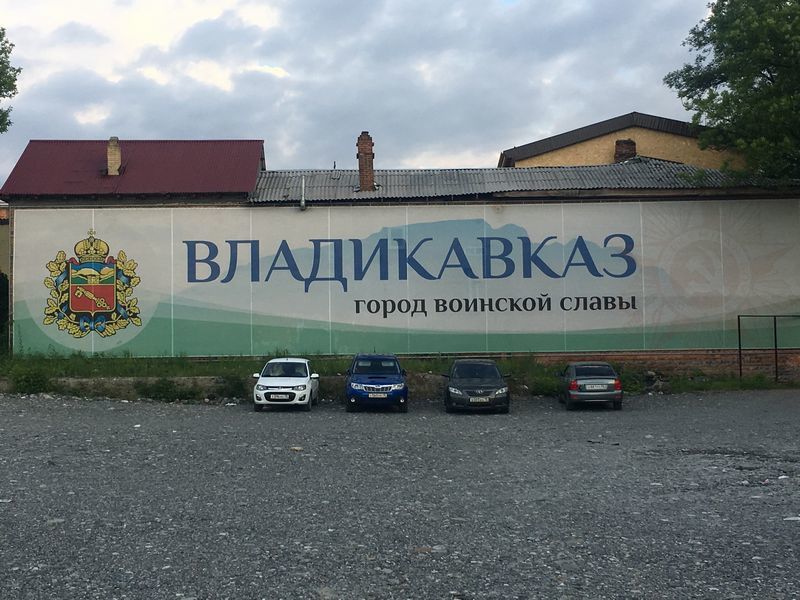 Even if religion isn’t your thing there is plenty to look at when spotting some of the main houses of worship in Vladikavkaz – St. George’s Orthodox Cathedral and the Mukhtarov Mosque are the most impressive, but there are also Armenian churches and churches and temples from other faiths that make for interesting buildings to spot while walking around.

Not actually in Vladikavkaz but close enough that an epic trip into the mountains isn’t needed to get to, this is a fine example of a religious centre at the edge of the mountains. A little bit touristy as it does see day-trippers from Vladikavkaz very often. The road to get here is good, the towers that can be seen all over are traditional Alanian defensive structures, and the scenery is lovely. It gets better the deeper you go into the mountains but if you have time only to scratch the edge of the Caucasus then this is a good spot to get a taste of mountain life at. Top Tip – high-quality honey is cultivated all over the area, there are a lot of people selling it very cheaply along the roads, get yourself some!

Vladikavkaz has some great ones. Lenin of course, plus the poets known for their work in the Caucasus; Pushkin and Lermontov, then there is a great one of the war hero Petr Barbashov outside of town on the road to Fiagdon Monastery. There are plenty of statues raised to Ossetian and ancient Alanian folk heroes and founders of various things too. For the best set of monuments though tale the trolleybus to the southern edge of the city and get off at the Victory Memorial Park (near to a fun children’s railway play area too) and see the monuments to World War 2, as well as the nearby ornate graveyards (morbid a bit, but fa good way to learn about history) of locals who fought in the various Caucasian conflicts of the late 20th Century. Also the touching monuments to the victims of the Beslan atrocity (schoolchildren murdered by Islamic extremists).

A dark area for sure, but fascinating without a doubt. 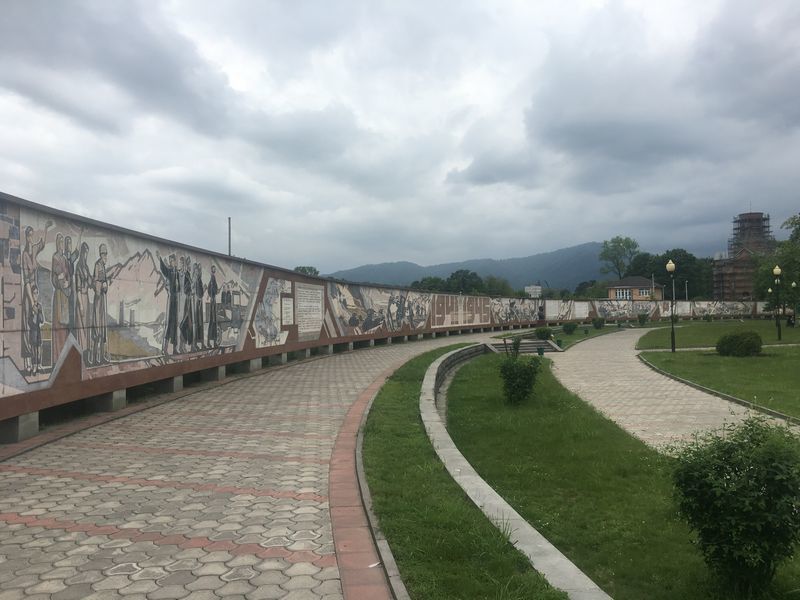