The History of Chinese Cinema

Location: 9 Nanyong Road, Chaoyang District. Nearest Subway Station as the crow flies is Wangjing East, but this is still quite far away so a taxi would be a good option for the last part of the journey to this museum 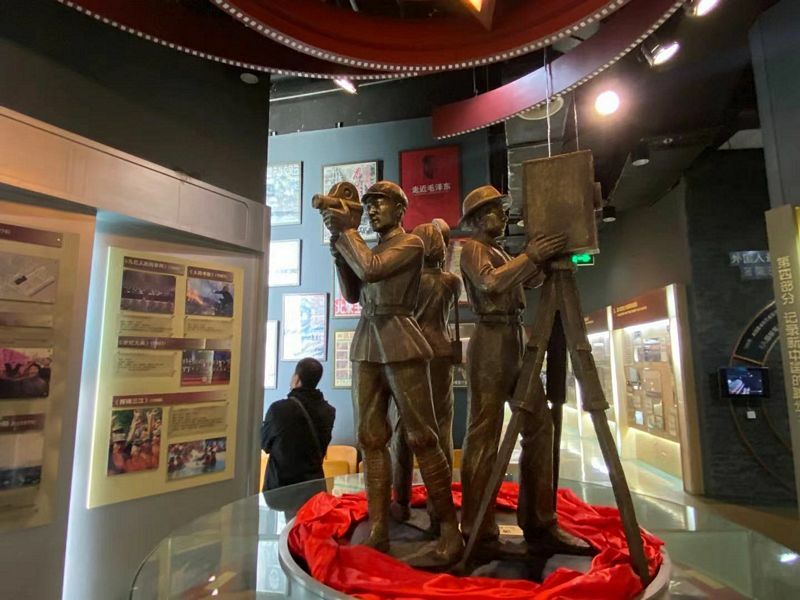 China National Film Museum is an exceptionally large purpose-built complex in the northeast part of Beijing, a bit out of the way but very close to the Railway Museum and so the two can be combined quite easily. This place was opened in 2007 to mark the centenary of Chinese cinema and is both exhaustive in terms of containing displays on the various facets of the cinematic arts, and exhausting because it is really huge and pretty draining to try to visit all of it in one go!

As this building contains a six screen cinema (including an IMAX screen) not all of it is part of the museum, but still there are four floors of exhibition halls to get through, 20 halls in all. In the interests of completion they are…1. The invention of Film. 2. The Birth of Chinese Film and its Early Development. 3. Chinese Film During the Revolutionary War Period. The Establishment and Development of Cinema in New China. 5. Chinese Cinema in the New Age of Reform and Opening Up. 6. Animated Film. 7. Children’s Film. 8 Science and Education, Dubbed Film, News & Documentary Film. 9. Films of Hong Kong and Macau. 10. Films of Taiwan. 11. Film Shooting. 12. Film Art Direction. 13. Special Cinematography. 14. Conventional Film Special Effects. 15. Digital Film Special Effects. 16. Film Sound Recording. 17. Film Editing. 18. Film Processing. 19. Film Animation. 20. The Variety of Films. 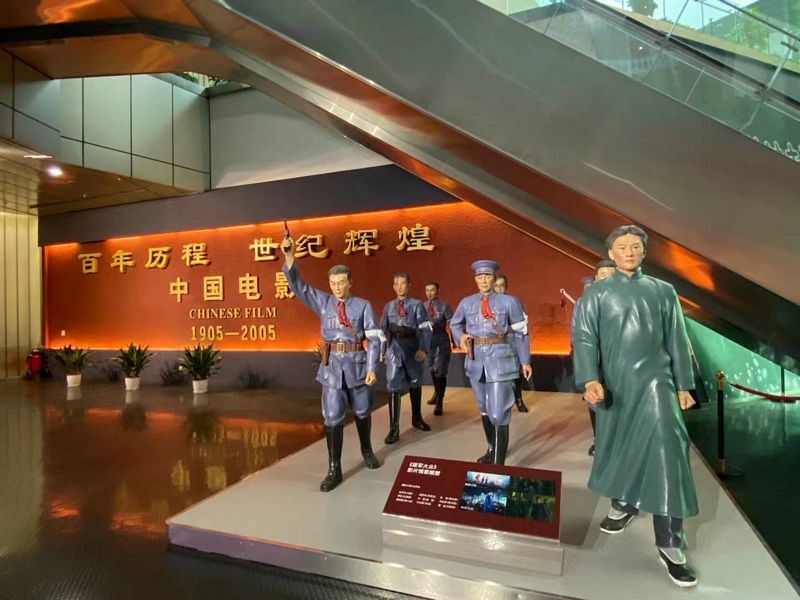 Now some of these halls are just made up of a couple of rooms, many of the technical rooms on the upper floors are fairly small but they do a good job of showing how these sections work towards the whole of a complete film, it's just that there are so many of these rooms to get through! Also in most cases not very much beyond the titles of the sections plus the introductions and conclusions are translated, so it can be a bit more of an effort for those (like me) who don’t get very far in reading Chinese, especially when it relates to something like Digital Film Special Effects.

The halls displaying the history of film in China are the largest ones, with panoramas and models galore, but still mainly they are made up of photos and text stuck on walls, which can be a bit repetitive. One very notable thematic element here though is propaganda – at first I thought that maybe this was a deliberate theme in acknowledging that much of early Chinese cinema has quite a strong propaganda element – after all cinema and socialist revolution share roughly the same period of birth and development. Then I realised that actually this museum just glories in propaganda a little too much, even the parts about contemporary films focus a little heavily on nationalistic dross like the Wolf Warrior films, and the number of displays featuring various biopics about the leaders of China is notable – I never knew quite so many movies were made about Mao Zedong actually, and this made me somewhat glad to have never watched any of them. 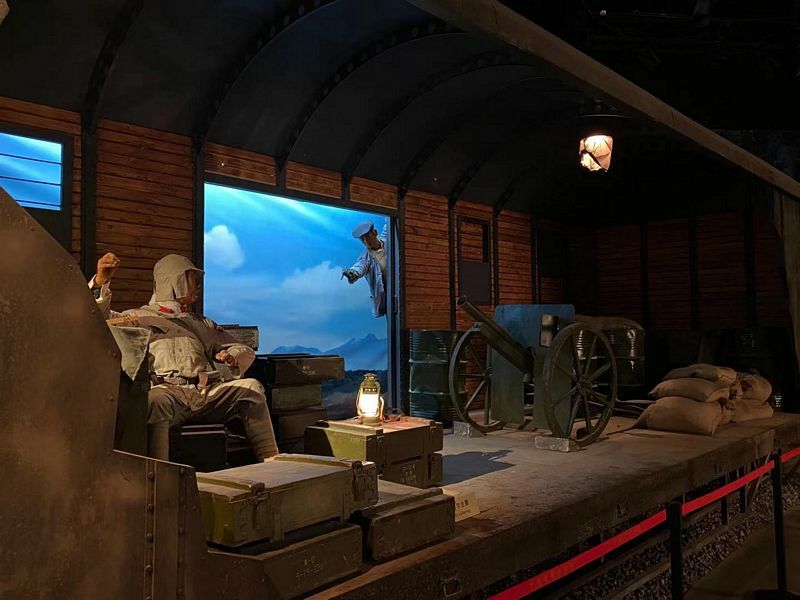 It’s the not watching of many of the films featured though that perhaps makes this museum less interesting than it should be. I simply hadn’t seen any of the revolutionary classics featured in many of the early rooms, and that does limit the enjoying of explanations about them. Plus, the themes are all a bit heavy-handed for me anyway. Eventually though I did reach areas that featured some of the Chinese films that I have enjoyed a lot and made me remember that the early 2000s were a bit of a golden age for mainstream Chinese movies, whereas the last few years have been dominated by overwrought and overbudgeted propaganda spectacles that leave me a bit colder. So, I reminisced about watching A World Without Thieves, Big Shot’s Funeral, The Missing Gun, Hero, and many more, which was fun for sure, but the quality of these films of just a few years ago against today’s half-baked blockbusters such as The Wandering Earth (based on the work of excellent writer Liu Cixin, but still a terrible film) speaks loudly and not very complimentarily about some of the motive forces behind cinema in today’s China.

Architecturally the building is a stunner; jagged lines, a big sunken red star in the front, and some fun statues of filmmakers outside, and inside is even better, with the main atrium featuring winding ramps making their way between the four floors which wraps around the inside of a massive curved screen, showing majestic scenes with booming music, the scale doesn’t even show up well in photos, this is a very impressive museum in terms of its construction and layout indeed., One of the very best I have experienced. 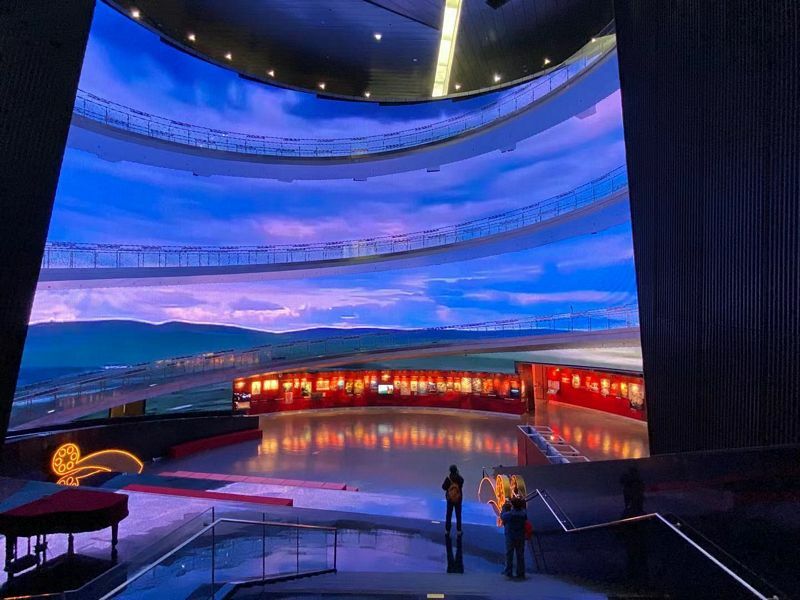 But the museum shop is utter rubbish (unless you want a postcard of Anne Hathaway, then you can choose between three different ones), and the café seemed to serve warm soft drinks and various biscuits only. Considering it took me two hours to go around the museum while not having seen hardly any of the films nor understanding hardly any of the technical information I would think any cinephile with fluent Chinese would need much more time and thus a bit more robust refreshments to be available too.

The China National Film Museum is not one I would recommend to visitors to Beijing unless they have a specific passion for the cinema of China, or the history of film in general. It is too alienating if someone doesn’t know anything about these films, and the general 20th century history of China too. Much of this history is covered through the lens of film quite well; the anti-Japanese struggle for instance. But then we have really disappointing blind spots such as a board which simply states that during the Cultural Revolution a total of zero films were made in China for seven whole years. This is because all the artists and actors were persecuted (not mentioned), but then credit is given to the paramount leaders of the country for reviving the cinema afterwards, remind me again who caused the industry to collapse in the first place, was it these very same people? The answer to this fair question is not given. So I am left wondering (or shaking my head, anyway!)

So for a modern museum there is still a fair amount of nationalistic silliness to get through, but it is all well displayed and impressively put together, and frankly it is fun walking through such a vast area. I think that maybe having some of the features films available to buy would be good, plus maybe the cinema on site could show some of these movies in revivals, rather than just screening the same stuff that anyone can see at their local cinema across the city. 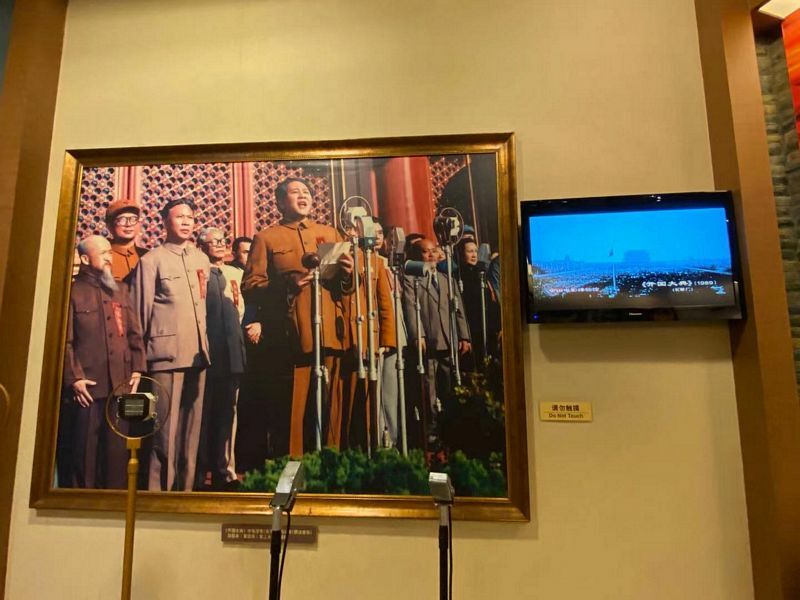