Grozny, the capital city of Chechnya, and situated right in the centre of this republic.

A city of over a quarter of a million people these days (far lower than the 400,000 counted in 1989) and a city famous mostly for having been destroyed in two violent conflicts since the end of the Soviet Union, what are known generally as the first and second Chechen Wars.

Starting life as a Russian fort from 1818 the Russians vs Chechens history of Grozny began immediately. It took decades for the Caucasus to be pacified by Imperial soldiers and finally Grozny became a city in its own right, growing fast, especially when oil was discovered here.

Grozny was of such vital importance to Russia that it was seized by the Bolsheviks only a day after the October Revolution in 1917, the civil war raged here and everywhere and various states, republics, soviets and such came into existence and disappeared rapidly over the next few years even after control was consolidated by the victorious Reds.

During WWII this was a major target for the Germans, with oil being as valuable then as it is now. The Wehrmacht fell short though, and Grozny remained unoccupied, but seeing conspiracies and treachery everywhere Stalin deported the entire Chechen nation into Central Asia – nearly a million people of which around 200,000 or so are believed to have been ‘liquidated’ prior to transport, or died along the way. A staggering and tragic toll in a horribly dark period.

It was 1957 before anyone was allowed to return and when they got back there were the predictable ethnic tensions between returnees and those who had moved there in the meantime, something that simply never really went away again. After the collapse of the USSR system independence was declared and many Russians left the area (which had been a trend in many of the peripheries of the USSR already). War raged in 1994-96, and then again in 1999-2002. With not just regular fighting but also reports of atrocities, terrorism, all kinds of utter nastiness going on. Finally, Russia was victorious and many senior leaders of the independence movement came round the Putin way of thinking. Those who did not do so fled abroad or were killed in action.

Akhmad Kadyrov became the first President, formerly a major advocate of independence and now a loyal regional leader, he was blown up in 2003 while reviewing a WWII Victory Day parade. His son, Ramzan Kadyrov succeeded him and since then has put forward the image of a tough and uncompromising leader, Regularly delivering more than 100% of the votes in Chechnya for Putin’s United Russia Party, appearing on Social media with his cats, inspiring the young men of Chechnya in physical fitness and hair & beard styles (almost everyone seems to model themselves tonsorially after Kadyrov), he is a major figure in the region and likely to remain in power for a long time. The kind of man and leader that the term ‘Strongman’ very much applies to.

Modern Grozny is a very modern place, the city was flattened by Russian weapons and built from the ground up. Not here the cracked pavements of the rest of Russia. Here everything is clean, everything is tidy, little doesn’t exist, its all very pristine in general. There are police everywhere, various different layers of them (Federal, Republic, City, the ‘ninja’s of Kadyrov’s praetorian guard) and all of them are armed to the teeth all the time it seems. You can see traffic police directing cars while wearing an AK-47.

It is fair to call Chechnya a conservative place, how this manifests for visitors is that it can be disconcerting to see so many armed men in uniform, so many people with the same hairstyle looking a bit tough, women almost universally covered up, and to find yourself in a very macho culture. Visitors are not expected to become locals, but bear in mind people’s sensitivities when it comes to things such as alcohol and religion. Also there is a general and institutional hostility to homosexuality (or any kind of sexuality seen as unconventional in Chechnya). There have been credible reports of state persecution against gay people, President Kadyrov has come out with some genuinely disturbing statements making his position clear. This is something that any LGBTQ+ visitors should know about and take into account when planning a visit in this region. Chechnya is by far the most intolerant of the republics and regions in this area.

A note on drinking – Chechnya is not very alcohol tolerant at all. It is a largely dry republic but as it is within the Russian Federation it is not illegal to take alcohol into Chechnya at all. Drinking in public is not allowed though. There are a handful of shops in Grozny that are allowed to sell beer for an hour or so in the morning, these are known as “Armenian” shops, you could try to find them. There is also one solitary restaurant that serves alcohol. It is the ‘Cupol’ Restaurant on the top floor (in the Cupola, hence the name) of the main building in the Grozny City Towers complex. The food here is very good, it is not overly expensive either. No alcohol at all is served during Ramadan, anywhere. 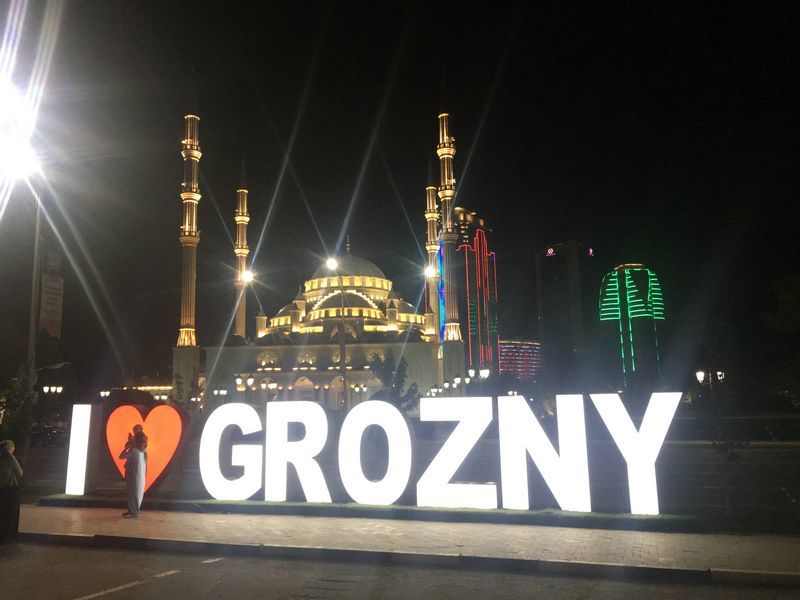 Grozny Airport (GRV) is a modern building, the older one being occupied during the first Chechen War and severely damaged at that time. Around 10km to the north of the city and easily reached on a decent highway. These days there are flights from a range of smaller not-so-famous airlines (Azimuth, Onur Air, Avivia Air, anyone?) to some major cities in Russia as well as to Istanbul, the UAE, and Tajikistan too.

Grozny is not very far from either Vladikavkaz or Makhachkala so arriving at one of their airports and then taking a ride for a few hours in a bus, marshrutka, or even a taxi are other options.

There is the main railway station, south of the centre, trains across the North Caucasus as expected.

Also the roads linking the city to the other regional centres are pretty good so those make for reasonable options as all.

Within the city there used to be an extensive tram network but years of war and bombing have left this a tiny rump system, usually people will move around by bus, marshrutka, or simply driving. Grozny is not massive but it is somewhat spread out so some long walks from end to end take longer than they would in some of the older, more condensed, cities in this region. 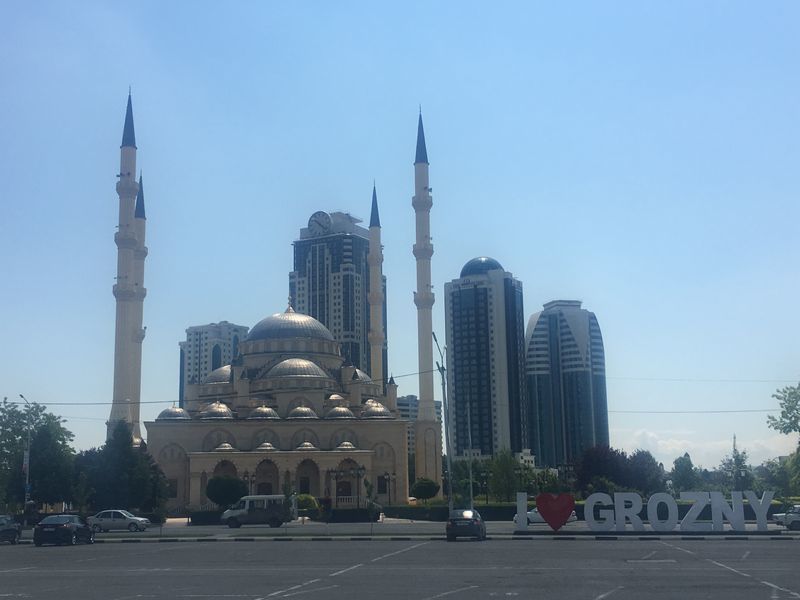 In the heart of the city sits this very impressive and ornate structure. One of the largest mosques in Russia and a very peaceful and pretty place indeed. Officially called the Akhmat Kadyrov Mosque (after the former President) this is universally known as the Heart of Chechnya Mosque.

Built in the Ottoman style, after the Sultan Ahmad Mosque in Istanbul, there is space for up to 10,000 worshippers at once, and visitors can also attend. For non-Muslims it is best to visit not during prayer time and also be aware that a dress code far stricter than most mosques in actual Islamic Republics is in place for women; no hair at all must be shown, tight clothes not allowed, jeans not allowed, etc. Basically they will lend you a formless hideous grandmotherly smock to wear when you visit, just accept it as part of the adventure! This dress issue holds true for most large mosques in Chechnya in general.

Not finished, and not clear when it will be finished (at the time of writing). This is designed to be the tallest building in Europe. A multi-purpose 435m tower, looking very metallic and phallic all at once. Keep an eye on the news for updates on this monster that will tower over everything else in the entire region!

Built to look like a domed fortress with traditional Caucasian towers at the corners this museum gives a great introduction to the history and ethnography of Chechnya. It is widely claimed in this republic that Chechens are the real natives of the Caucasus with all of the myriad other groups basically being descended from some arriviste group or another (Persians, Azeris, Tatars, etc) and this somewhat pseudo-historical claim does tend to resonate somewhat.

This museum doesn’t base itself around this though and is a worthy place to visit for anyone looking for more than just brand new buildings and to be somewhere with the hint of recent wars and violence. 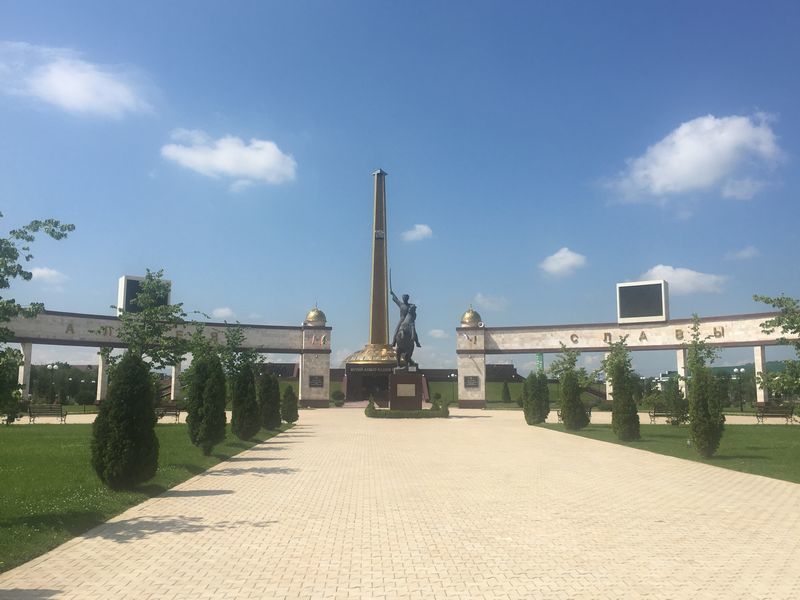 A memorial and museum to the father of the current President. While only technically in power for a short time before his murder Kadyrov was a dominant figure in the path of the Chechen state from independence-focused to a very loyal part of the Russian Federation (hence his assassination). This place gives a potted history, it is partisan of course, but very interesting.

The main street of modern Grozny. With a European style promenade in the middle, and lined with new buildings and decent roads. Here you can find cafes, boutiques, no bars, but plenty of restaurants. The new Grozny personified in one street. It does say something about the scale of the Russian victory in the Chechen wars perhaps that the street carries the name of V. V. Putin, but the compromises necessary for this formerly-unthinkable thing to have occurred have also brought peace to a very troubled place. So walk on Putin Blvd and enjoy something that wouldn’t have been advisable or even possible even just 20 or 25 years ago. 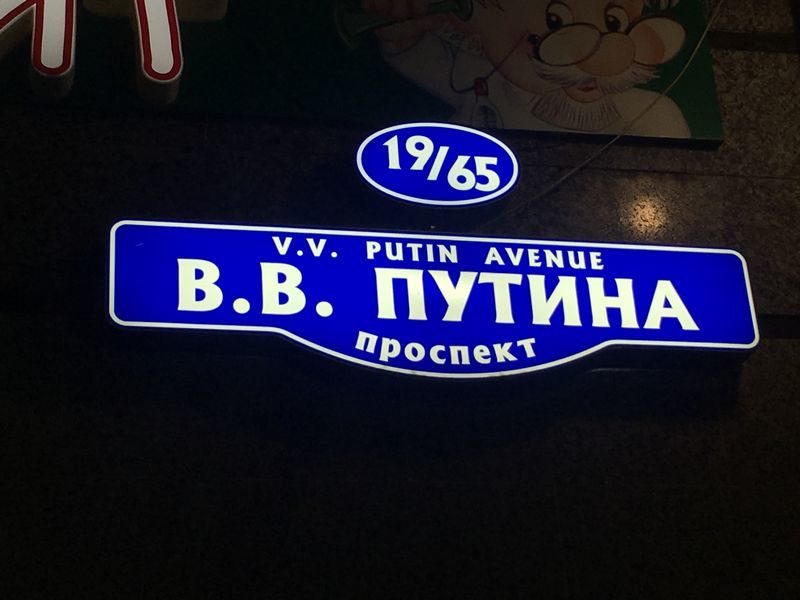