Nalchik is a small city of around 240,000 people and serves as the capital of Kabardino-Balkaria, one of the lesser-known republics spread across the beautiful North Caucasus area of Russia, the mountain range that separates the former soviet states of Georgia, Armenia, and Azerbaijan from the Russian Federation.

This region has incredible diversity in ethnic groups and is a melting pot at the edge of empire. While there have been civilisations in the Caucasus for millennia Nalchik as a city is only a century old, having been a Russian fort since 1724.

Today’s Nalchik is a mostly peaceful and relaxing place, being in the foothills of the mountains it has many areas of great beauty and multiple sanatoria for people looking to take the waters, over the last century it has certainly had its share of turbulence though, being occupied by Romanian troops fighting on the side of the Nazis, who embarked on an effort to exterminate the ancient community of Mountain Jews in the area (unsuccessfully), plus a 2005 Islamic militant attack on Russian security forces.

These days Nalchik is known as a clean city, a place for relaxing, and the starting point of expeditions to summit Mt. Elbrus, the tallest mountain in Europe, which lies within Kabardino-Balkaria.

Kabardians make up the largest ethnic group at just under 50% of the city’s population, followed by Russians, Balkars, other Caucasian nationalities as well as Ukrainians, Mountain Jews still live in the area but in very small numbers now, most having emigrated to Israel. 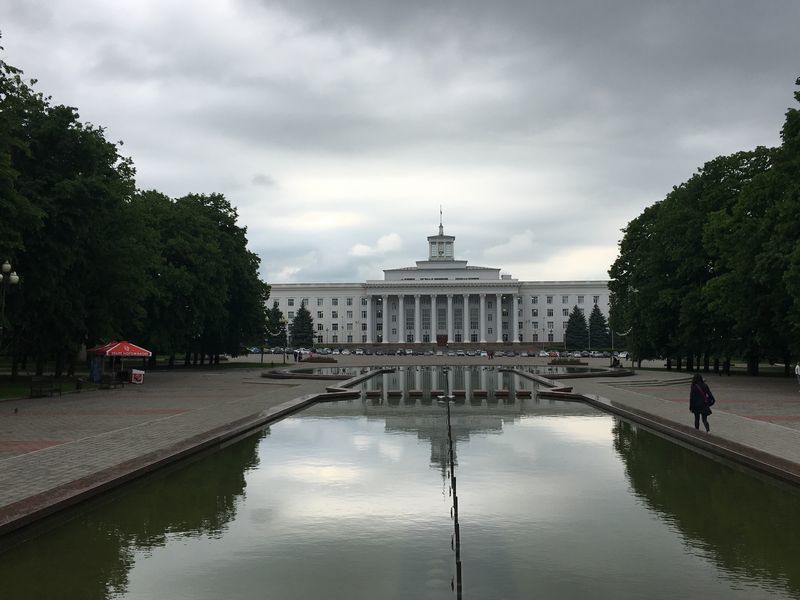 Nalchik Airport (NAL) is a small one but is fully functional for getting in and out, usually the foreigners arriving here will be mountaineers heading for Elbrus.

The Airport is only 3km from the city centre so you could even walk into town from here, otherwise, there are taxis and marshrutkas waiting for arrivals. Flights arrive only from Moscow and St. Petersburg usually, the Caucasus has other larger airports for other international flights (such as those to Sochi).

Nalchik has a railway station, dating from 1915, with links to Moscow and across the Caucasus. A good option for travelling around the region in a relaxing manner (usually slower than taking a marshrutka between cities though)

For getting around inside Nalchik there are public buses all over the place, easy to use and very cheap. Otherwise most of the centre is very walkable, the main ‘high street’ is Lenin Avenue, which runs for several km through the centre of the city. The centre of Nalchik and a good place to start a walking tour of the city, with the Kabardino-Balkaria parliament building on one side and Lenin stands at the other, fountains in the middle and Lenin Avenue cutting through the square

The central buildings of the main religions practised in Nalchik are both fine examples of their respective architectural styles; the Central Mosque and the Cathedral of Mary Magdalene are both worth visiting. Dress codes apply.

Not actually in Nalchik, but only 50km or so away so the city is the ideal base for starting an expedition. This is Europe’s highest mountain and a dormant volcano. There are cable car/chairlift options to get t the top for those who don’t wish to do it the hard way. It is possible to get up and down this mountain n a single day, making it certainly the simplest of the 7 continental highest peaks to climb.

Museum of the Kabardino-Balkar Republic

Great for explaining where you are and the history of the area. Mostly in Russian only though and does tend to assume some knowledge in advance. Still a good stop to get some intro into the complex history of this city and area in general.

A large park complex running for more than 2km along the eastern side of the city, alongside the Nalchik River. A very pleasant place with so much to see and do. The basic Nalchik Zoo is here, walking trails, restaurants and cafes, theatres, a very retro funfair, and a rickety but reliable cable car running up to a lovely viewpoint to see over the city and out to Mt. Elbrus.

Topped by a restaurant building built in the shape of a Kabardian warrior. An excellent few hours can be spent exploring this park and mingling with the locals of all ages who do their relaxing here.