Location: the address is really just ‘Xiannongtan Temple’ as the buildings here pre-date the idea of addresses really. But the entrance is at 21 Dongjing Road, Xicheng District, Beijing. Nearest subway station is Tianqiao which is still around 20 minutes walk away

Cost: 15 RMB (bring passport or photo ID) – on Wednesdays the first 200 visitors get in for free for some reason 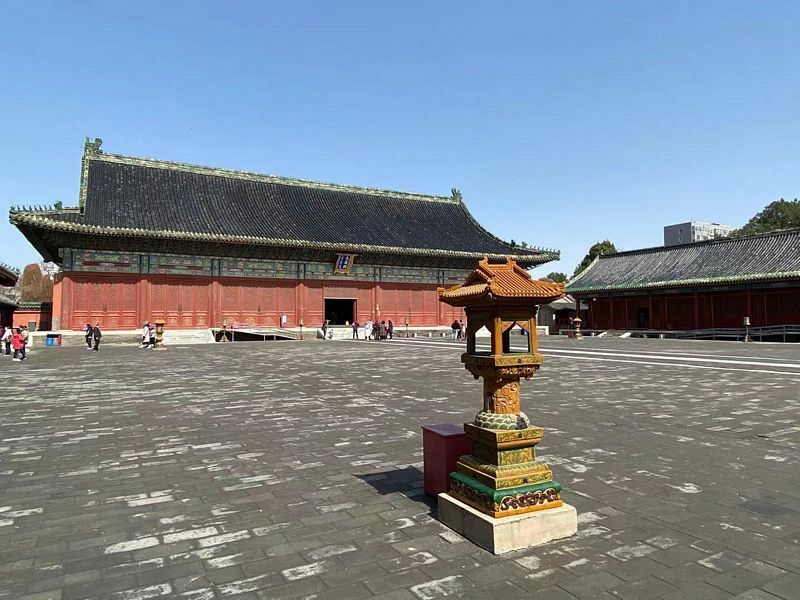 The Beijing Ancient Architecture Museum is located inside the Xiannongtan Temple (Temple of Agriculture), in the southern part of the city centre of Beijing. This is a Ming Dynasty era complex built in 1420 and eventually dedicated to the god of agriculture.

Emperors from the Ming and Qing Dynasties would visit here each year and perform elaborate rituals to ensure the success of the harvest, including doing a bit of farming themselves (literally four pushes of a plough, before retiring for a ritual banquet – this is perhaps the very definition of a token effort!) and many of the buildings remain intact from that period while some, such as the sacrificial altars, have been moved from ground now occupied by a school and some sports fields.

The temple complex is an excellent example of period architecture with some utterly lovely interior ceilings especially notable. Considering the fact that the location is convenient and the history is fascinating this is a very under-visited site. Compared with the nearby Temple of Heaven which is one of the canonical sites of Beijing and is often very full of visitors and the Temple of Architecture is a good bet for anyone looking for a bit of Chinese history but not to be engulfed by crowds. 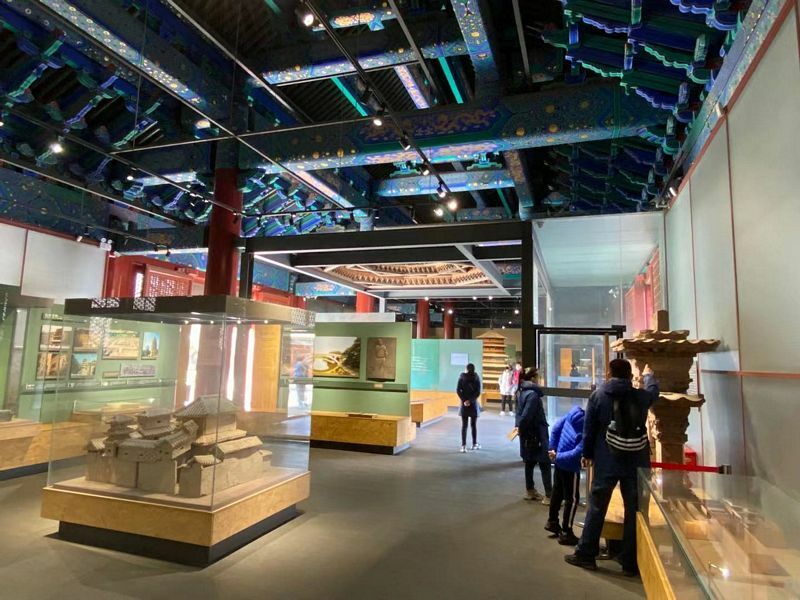 But what is the difference between the Temple of Agriculture and the Ancient Architecture Museum? The line is blurry actually as the ticket booth is for both places, and they do overlap a lot. Basically the whole complex is the Temple, with altars, buildings for the ceremonies, for getting changed (the Emperor, not the regular farmers), for burning silk offerings, for preparing the sacrifices, and so on. And within the largest set of buildings there is the fixed exhibitions of the Ancient Architecture Museum. So even while the kitchen area of the Temple is clearly a museum too (a good one, well laid out and with clear explanations about the history and use of the temple), this is not part of the Ancient Architecture, which is in the main courtyard buildings of the temple. Confused? It doesn’t really matter as you buy a ticket, and you can visit all of it anyway.

Beijing Ancient Architecture Museum is made up of five exhibits. Firstly there is the impressive ‘Development Course of Chinese Ancient Architecture’ which gives the visitor a quick run through of various styles across the millennia of Chinese history. Starting with palaeolithic man and then running rapidly through the various dynasties and eras of China. The hall is quite large (and very attractive, especially the ceiling) but the history is long and so you really just get a glimpse at how things changed over time. It is a solid introduction though so worth checking out the bilingual explanations.

The second hall is across the massive courtyard, and this is called ‘Construction Artistry of Ancient Chinese Architecture’ This hall too is very good, with displays showing how various parts of buildings were developed and made, how some of the ornate wooden elements of temples are held together, and so on. Explanations also in English and Chinese here which is helpful indeed. 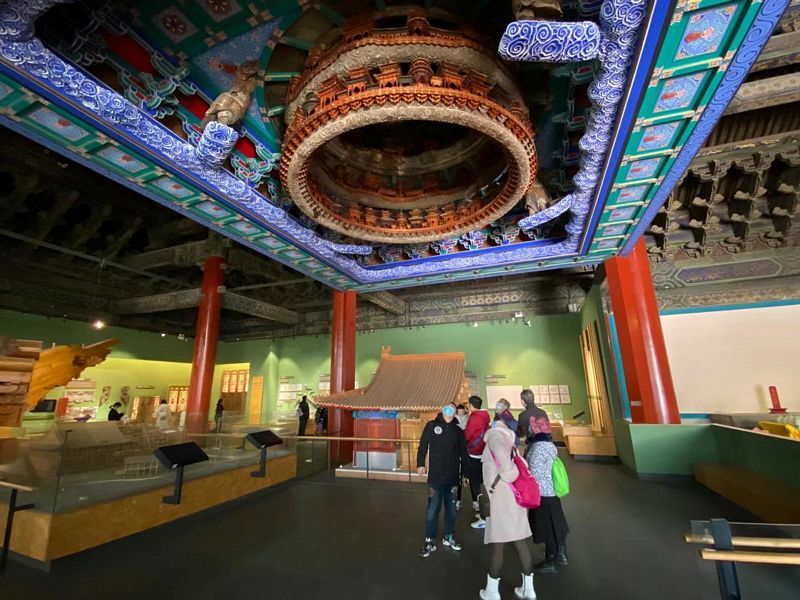 The third section, which is small and wedged between sections two and four, is called ‘Taisui Altar  -Recovery Exhibition of Altar of Taisui’ and I don’t really see the point of this at all as the altar itself is in the very next courtyard and part of the kitchen area of the Temple of Agriculture. So, you end up seeing the same thing twice when once is enough. Its an altar with some model pigs in front of it.

The fourth section, ‘City Constructed by Craftsmen – Ancient Chinese Cities’ has a lovely 1:1000 model of Beijing as its centrepiece, and attempts to show a narrative of how the layout of cities developed based around spiritual concepts, governmental necessities, and trading patterns. It’s a good idea indeed but the space to make this case is not large and the number of displays are limited. A pity as having such a concept as a way to display these materials is something I haven’t seen done and would be interested to know more about.

The fifth and final exhibition is called ‘Architectural Types of Ancient Chinese Buildings for Appreciation’ and is mostly an attractive display of photos of buildings and structures from across China, divided up into sections; homes, gardens, tombs, pavilions, and so on. It's interesting enough but seemed to most visitors to devolve into an “I’ve been there’ kind of experience with folks just pointing out the ones they have seen and the ones they are yet to visit. A commonality of style is evident in the chosen photos but there didn’t appear to be a theme other than to group some attractive photos together. 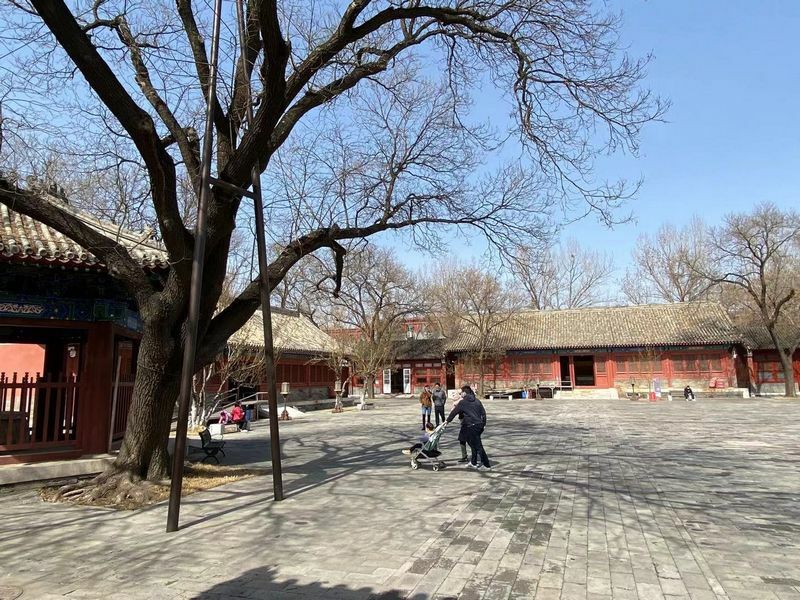 There is also a temporary exhibition space on the east side of the main courtyard. At the time of my visit this had another show of photos of buildings from around China, nicely done but completely lacking in translation, and also with a very slight theme. Worth a five minutes stroll through but not much more than that. Maybe moving the ‘City Constructed by Craftsmen; into this space and allowing the narrative from that section the room to be expanded upon would be a good move.

Somehow there isn’t actually a souvenir shop at this otherwise-excellent museum. There is a small stand with a handful of generic souvenirs, but nothing really about Ancient Architecture, which seems a missed opportunity. I was given a free guidebook to Beijing museums by the security guards anyway, but this was my only souvenir, no magnets, mugs, or little models of architectural forms, a pity.

I do consider the Ancient Architecture Museum to be a bit of a hidden gem though, but it is hidden in plain sight and just is simply not that popular a place. But it is cheap enough, easily found, and interesting enough for a visit of 2-3 hours for sure. It’s also very photogenic on a bright day, and it's not that busy at all. A strong recommendation for visitors to Beijing and anyone with any interest in Ming Dynasty temple architecture at all. 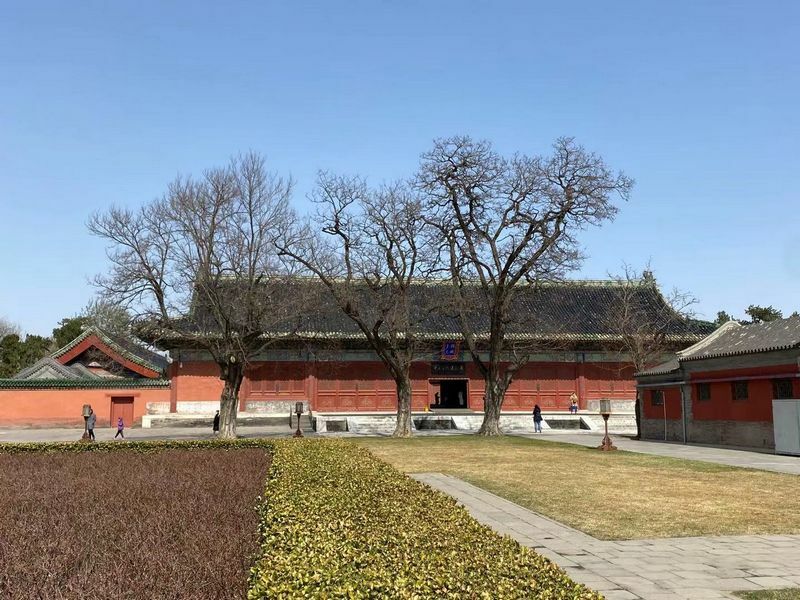