Explore a vital pathway into Beijing 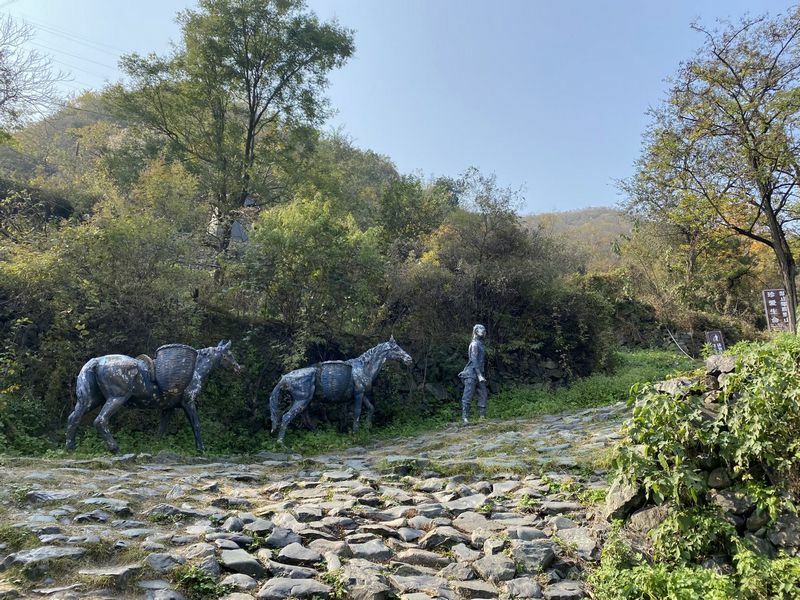 Deep in the hills to the west of Beijing, in Mentougou District, beyond the 6th ring road, lies the Jingxi ancient Road scenic spot, a very pleasant hillside area built around a surviving part of the historical pathway for goods to be transported through the hills to provision and provide Beijing in all its various incarnations over the last thousand years.

I came here for the Ancient Road Museum in fact, unsure of what it really was and also unsure if it was even open as I failed to find a phone number anywhere online. Upon arriving and finding it open I asked at the ticket booth why it was that I couldn’t find the phone number anywhere and was told that it is printed on the ticket itself. That’s the ticket I needed to come all this way to buy though, right? Yes, that one exactly! The phone number is 61880498 by the way. 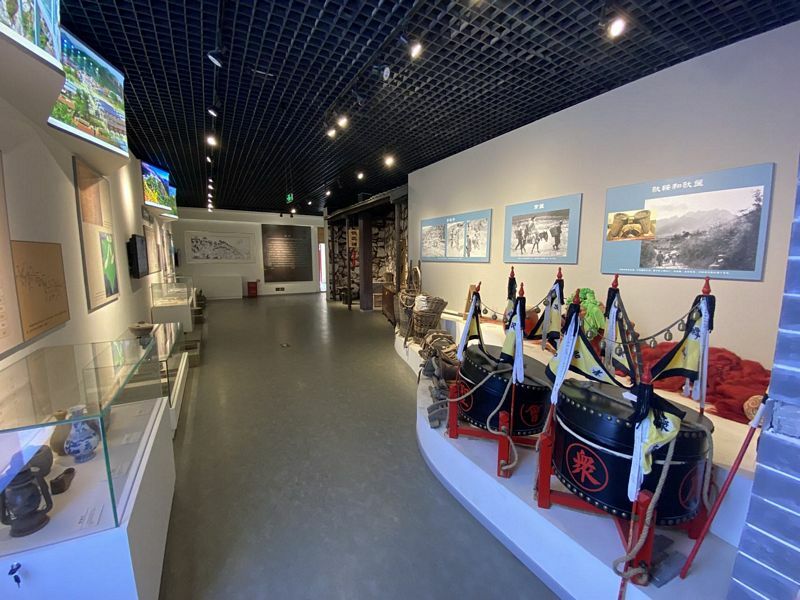 The Ancient Road Museum is small but does a very good job of running the visitor through the general intro to what is left of the road itself. In reality, it was extensive and wound its way through the hills, as a millennium of donkey and camel caravans passed through and over these passes.

All information is in Chinese only, but we get to see some maps of where the road used to run, some relics from the caravan days, an old rickshaw, and some great photos of the various ruined gates that lie along the path of the road. Also, some photos of the donkey hoofprints that gradually become divots in the rocks of the road, testament to the sheer volume of caravans and the number of animals making this journey – the deepest of these divots is said to be 30cm deep. 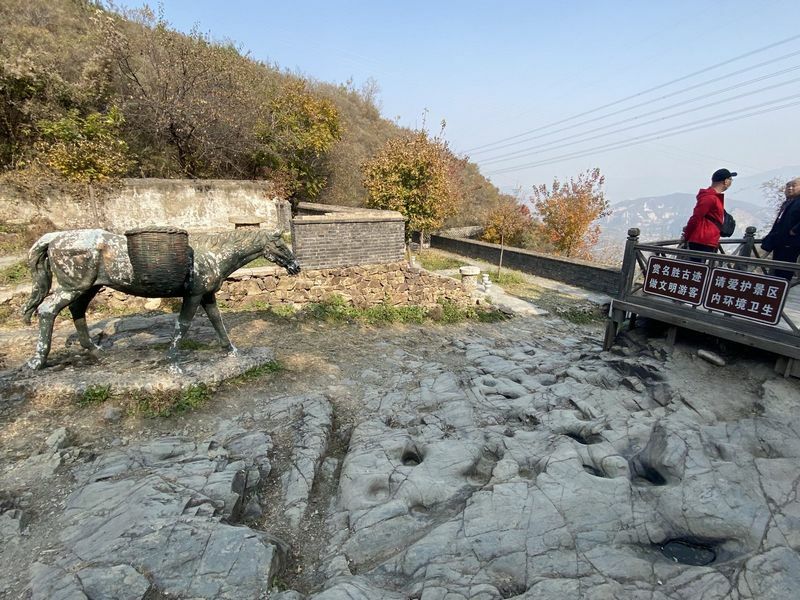 There is a strange horse-riding simulation game here (turned off at the time) which I thought may be teaching people to ride over the Ancient Road but is most likely just some kind of children’s game, and then finally some more relics and displays of what life along the road was like for those who served those who passed along it – traders, blacksmiths, merchants, and so on. The whole economic ecosystem of this crucial pathway. It is not in great detail, but it is rather interesting anyway.

Outside the Ancient Road Museum though things get stranger – immediately outside the entrance is a sign for a ‘Military Themed Bar’, as well as a piece of 1930s artillery, some ammo boxes, and a concrete structure made to look like the nose of a plane. It turns out this is the entrance to a tunnel that leads some tens of metres under the mountain into a subterranean bunker built in 1968 on the orders of Lin Biao, as part of his network of military HQs ready for the expected invasion of the Soviet Union. 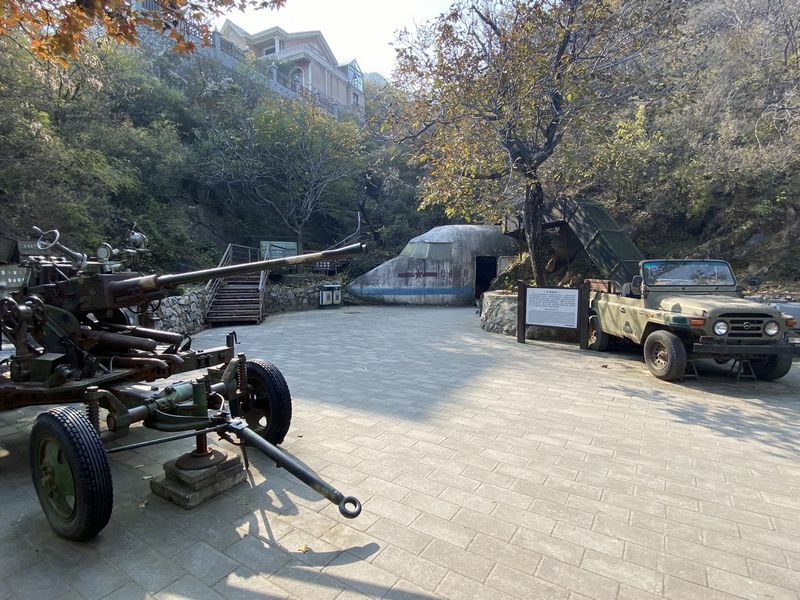 Today though this is a bar, or rather a bar that is closed, but yet is open to just wander into. A lady working there, or at least moving things around, told me that the bar will open again post-virus, and that anyone can just come along and bring their own snacks and drinks until then. It was cold though, even though it was very cool and weird. Certainly, a place to keep in mind for unusual parties when the world is more normal – there are a number of guesthouses in the village just below the Ancient Road site too, ideal for an edge-of-Beijing mini-vacation. 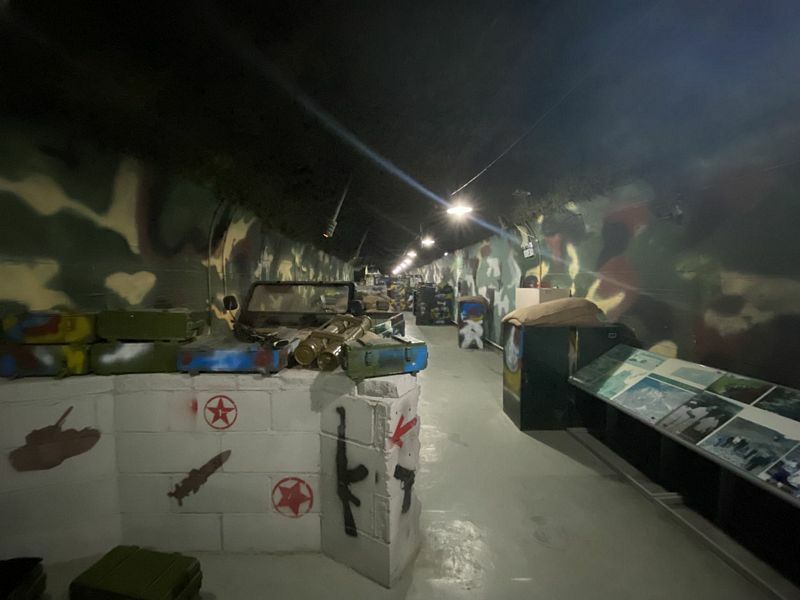 The lady from the Military Bar also convinced me that I should hike the Ancient Road itself. She told me it only takes half an hour up and down, and that I would be fine. Foolishly believing her I set off up the very steep and uneven trail, weighed down by too many jackets but no water at all. It turned out that this very scenic and lovely part of the road was about 1.5km long and relentlessly uphill. It was nice and deserted apart from a few people coming the other way, and nearer the top is where I came across the impressive donkey hoofprints, a small temple with a marker dedicated by Emperor Qianlong, as well as one of the beautiful ruined gates and, finally, a temple where travellers would make offerings for the successful arrival of their caravan. Also a car park where people were clearly just driving up to and seeing the best bit of the road without the bother of actually climbing up the path! It took me about 40 mins to get to the top, with stops for breath and photos.

Also in this area is a glass-bottomed viewpoint and a scenic area with the vague name ‘General Valley’ but I didn’t have time for these attractions. After all, I was there to review a museum and ended up going both inside a mountain and most of the way up one as well – for sure this added great value to the experience of visiting the Ancient Road Museum, and it would be frankly a bit weird to go all that way to just see a small museum and not to then venture on to the Ancient Road itself. So even though 15 minutes is enough for the museum visitors should budget enough time and energy for a bit of a hike as well, to make this most of this historically interesting and scenically beautiful quirky spot at the edge of our city. 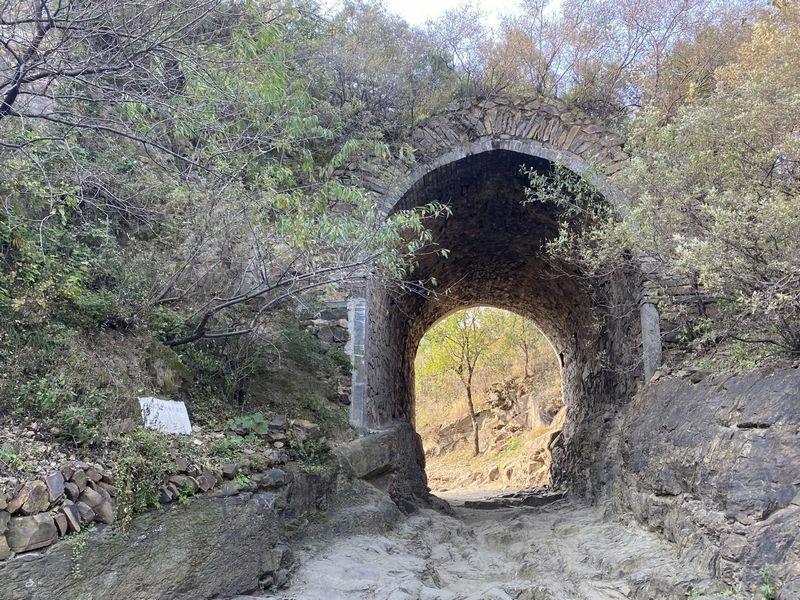