The South Korean flag is perhaps one of the most distinctive flag designs in the world. Alongside its bold design sits centuries of history and symbolism.

The South Korean flag, in one form or another, has been in use as the national flag of Korea since the 1800s under the Choson dynasty.

Design of the South Korean Flag

At the heart of the flag of South Korea is the red and blue Taeguk symbol, similar in design to a Yin and Yang symbol, this emblem has been an essential Korean symbol for centuries.

There are recorded uses of the Taeguk symbol dating as far back as the Goguryeo dynasty, over a millennia ago.

Each symbol has a variety of meanings in traditional Korean and Taoist culture.

History of the South Korean Flag

The first official use of the Taeguk flag design was as the ensign of the Choson Navy.

The design flew on a black background and was bordered by a traditional Chinese Lo Shu square, in white, to contrast the dark background.

Choson adopted the Taeguk symbol as it’s royal standard in 1856, and later as it’s national flag 1882.

This design saw a return of the concentric-style Taeguk, this time in white and cream, emblazoned on a red background.

The Taeguk, once again, was surrounded by eight palgwae.

It’s possible this symbol remained a vital representation of traditional Korea since Choson was the first dynasty to unite Korea under a single leadership.

When Choson gave way to the short-lived Korean Empire (1897-1910), the Taeguk flag was redesigned into its now more familiar style.

This time, the national flag saw a blue and red taeguk surrounded by four palgwae.

The four palgwae on this flag are the same four used on the official national flag.

Astute observers will notice the Taeguk is much more ‘swirly’ than in the modern design, this is more in keeping with the traditional format. Many ancient Taeguk even had three colours. The most common example of this was the red, blue and yellow Taeguk. 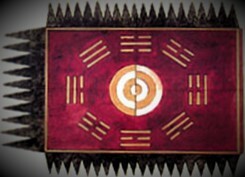 The March 1st Movement, known as Sam-Il, or 3.1 in Korea, was an anti-Japanese independence movement which reached its peak on the 1st of March, 1919.

Choe Nam Son, a Korean historian, had drafted a declaration of independence for Korea to be delivered to the Governer-General of Korea, Hasegawa Yoshimichi.

Pagoda Park in Seoul became the centre of the movement. Crowds gathered to hear Chung Jae Yong read the declaration.

Later, the crowds began to march, many under the banner of the Taegukki.

Under Japanese rule, Korea was considered a protectorate and so had no official national flag. The Taegukki of the 1st of March movement is the design ancestor of the flag currently in use today.

The only difference is the angle of the Taeguk and the position of the Palgwae.

The Korean government used a similar flag in exile from their Shanghai base between the end of the 1st of March movement and the surrender of Japan in 1945. 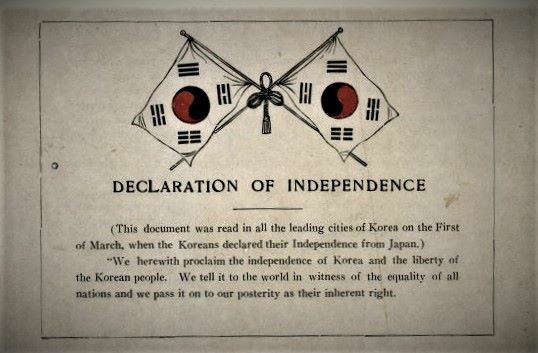 In the aftermath of the Second World War, the Taegukgi was settled on as the national flag for the newly established Republic of Korea.

The flag used between 1945 to 1948 to represent the US-occupied southern Korea was the first flag to use the same Palgwae as the modern flag.

Between 1948 and 2011, the flag was slightly altered numerous times.

The modern iteration of the flag was agreed in 2011, officially defining a slightly lighter blue for the Taeguk.

Today, a stylised version of the Taeguk is used as the official government logo.

Use in the North

A brief provisional government was established in Korea after the fall of Japan; the People’s Republic of Korea.

The government was proclaimed in September 1945 and quickly banned in the US-occupied south which was becoming staunchly anti-communist.

The PRK flag depicted a Taeguk on a white background with three parallel red horizontal lines behind it.

While the US banned the parties activities, the USSR worked with the PRK committees in the north.

Later the government was reorganised into the modern Democratic People’s Republic of Korea, and a new flag was adopted.

However, before the new DPRK flag was unveiled, along with the founding of the country in 1948, northern Korea was run by the Provisional People’s Committee for North Korea.

This government flew both the USSR flag and a version of the Taegukgi Flag.

This flag was officially replaced by the DPRK flag on the 8th of September, 1948. A day before the country’s official founding. 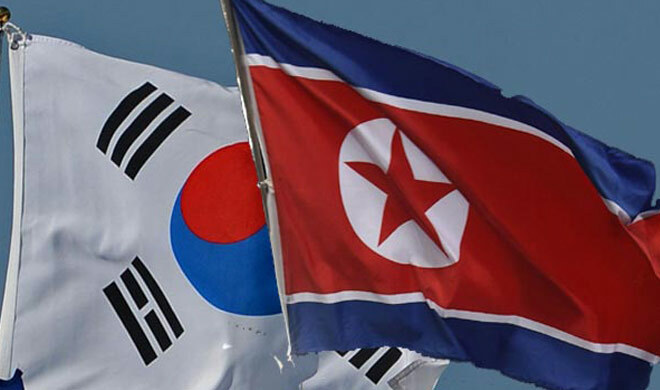