Flags Of The World: Cambodia Flag

The emblem at the Cambodian flag's heart makes this national banner immediately recognisable to anyone with a passing interest in Cambodia or the region.

The building shown on the Cambodian flag is the reason for many travellers visits.

If you want to know more about this national standard or its reflection of the national psyche, read on?

The flag of Cambodia is designed on a flat rectangular shape; its official length-width ratio is 25:16. The flag is of a horizontal tri-band design in two colours, red and blue. There are two blue stripes, top and bottom, while the red band cuts through the middle.

The red band cutting through the centre of the flag is twice as thick as the blue bands.

Emblazoned at the centre of the flag in a white outline is the temple of Angkor Wat.

There may be some variation to the meaning of the flag elements from inception to the current time.

Said to symbolise the countries monarchy, it also reflects Cambodia's sense of liberty, cooperation, and brotherhood.

This fantastic temple is one of the most important temple complexes in central Asia. For Cambodian Angkor Wat on the flag represents the country's integrity, justice, and heritage. For a nation with such a tumultuous past, Cambodia's national flag hasn't changed all that much. The initial design of 1863 bears many similarities to the current reincarnation first introduced in 1945.

In the 1860s, Cambodia opted to be a French protectorate to defend the country against its neighbours Thailand (then Siam).

As a French protectorate, Cambodia lost many of its rights to France and even more land to Thailand. It was during the Japanese occupation On 9th March 1945 that Cambodia proclaimed its independence. Shortly after, in 1948, the Cambodian flag as we know it was born.

Over the coming decades, Cambodia was to face some of its darkest days in history; a war in neighbouring Vietnam was to destabilise the region, which led to the Chinese-funded Khmer Rouge taking control of the country. The  Khmer Rouge were not only to try to reset history as they saw it but act even more extreme.

Aside from emptying all the cities and sending everyone to the countryside, worse was to come. Anyone with an education, different religion, disability, links with power, understanding of business, ties with neighbouring countries, caught begging were all likely to be executed; furthermore, if the person in charge of executions failed to fill their quota, they to would be executed!

Eventually, the Khamar rouge would lose their grip on power, and the country gradually transitioned to peace. 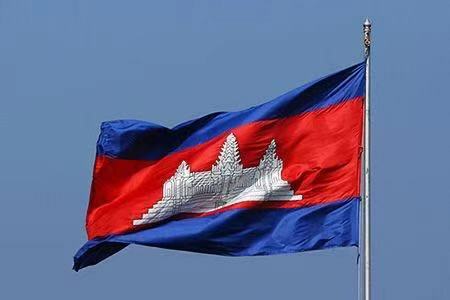 The flag of Cambodia is one of only six state flags n the world to feature a building in its design; the other countries are Afghanistan, Bolivia, Portugal, San Marino and Spain.