History and meaning behind the National Flag of North Korea

North Korea Flag: What does the North Korean flag look like?

The North Korean flag consists of two parallel blue bars on the top and bottom sides and a wide central red bar separated from the blue by two thin white lines. Inside the red bar, on the hoist side of the flag, is a white circle with a red five-point star inside.

The star is synonymous with many other communist-era flags of the world.

The official description of the flag is listed in Chapter VII, Article 170 of the Socialist Constitution of the DPRK (North Korea):

The national flag of the Democratic People’s Republic of Korea consists of a central red panel, bordered both above and below by a narrow white stripe and a broad blue stripe. The central red panel bears a five-pointed red star within a white circle near the hoist. The ratio of the width to the length is 1:2. 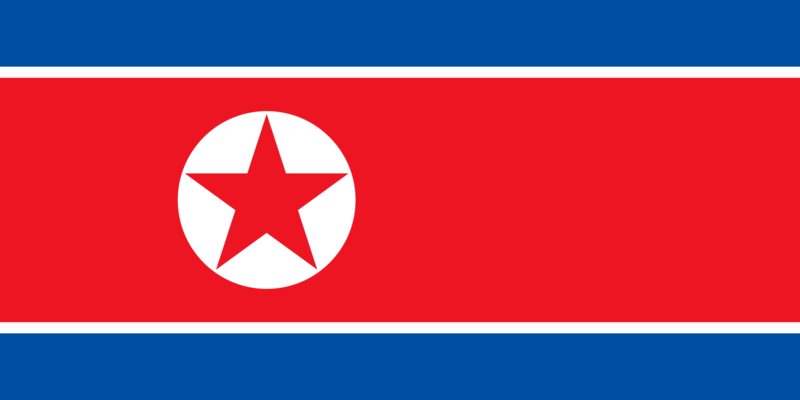 North Korea Flag: What is the meaning of the North Korean flag?

Almost all flags of the world are deeply engrained with symbolism.

The red star is the international symbol of communism and socialism. It was widely used on flags in the Soviet Union and in other communist-bloc states.
According to the President Kim Il Sung:

The red colour of the flag symbolises the anti-Japanese fervour, the red blood shed by the Korean patriots and the invincible might of our people firmly united to support the Republic. The white colour symbolises the one bloodline, one land, one language, one culture of our mono-ethnic country, which lived in purity. And blue stands for the gallant visage of our people, symbolising the spirit of the Korean people fighting for world peace and progress.

The vertical display of the flag is reminiscent of the Korean peninsula itself.

Blue on either side to represent the West and East seas with the peninsula glowing in red under the light of a socialist star.

Korea has long been associated with the Taegukki, the name for the flag design still in use by South Korea.

The white background with the Yin-yang symbol in the centre surrounded by four trigrams remained the symbol for Korea even under Japanese occupation.

A variant of this flag has been in official use since 1883 when it was adopted by the Choson Dynasty.

After the liberation of Korea from Japan in 1945, the USSR-controlled northern half of the peninsula officially re-adopted the Taegukki as their national flag. 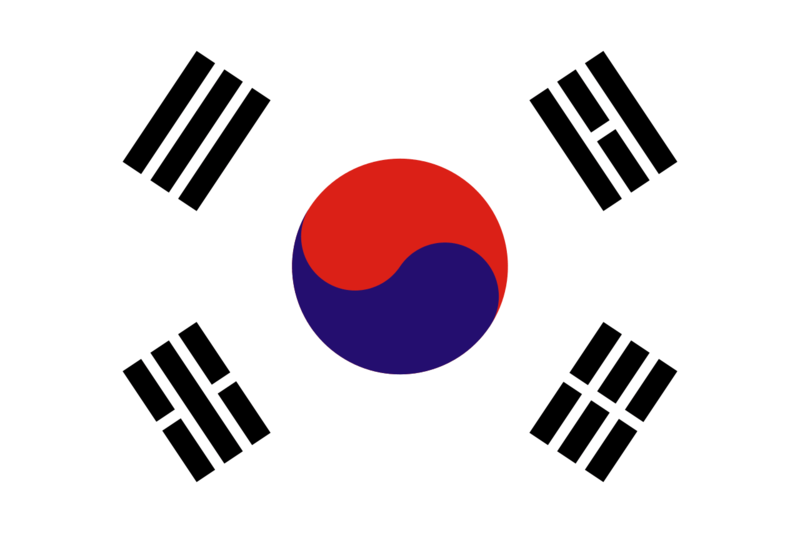 The decision was based on the fact that the Chinese philosophical roots of the Taegukki design did not align with modern socialist principles and so should be replaced.

Official DPRK (North Korean) sources credit the design to the then-Chairman of the Communist Party of Korea and later President – Kim Il Sung.

North Korea Flag: Other flags in use by North Korea 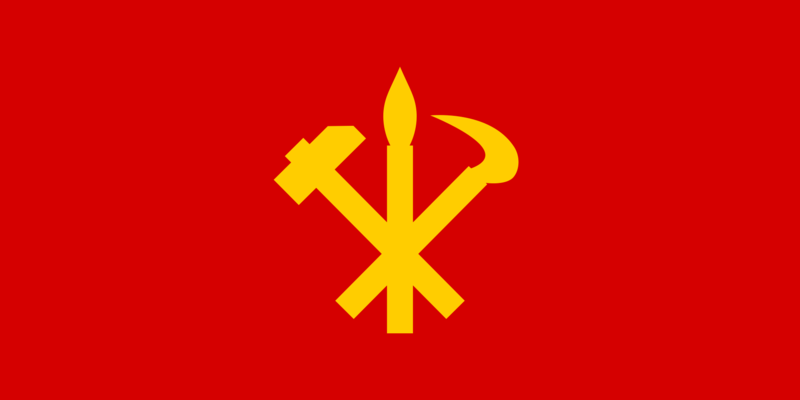 The flag shows a red star, similar to the national flag, which likely represents communism/socialism.

Inside the star is a black cog to symbolise industry and/or the working class (an important part of left-wing political ideology).

The star is on a white background with a red stripe about ¾ of the way down. 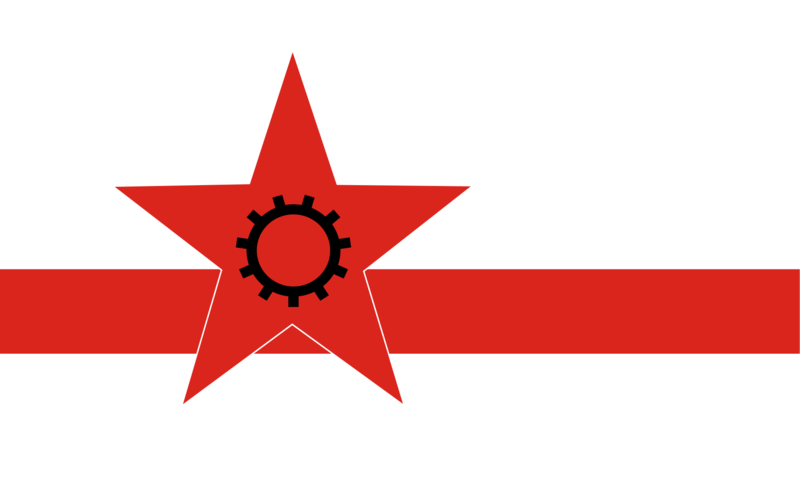 The Korean People’s Army (KPA) flag has the same base design as the national flag.

A red stripe in the centre with two blue stripes at the top and bottom separated from the red with white stripes.

These likely have the same meaning as the national flag.

In the centre is a cap badge of the KPA with a golden wreath below it.

The date of the army’s founding is emblazoned in the top left of the red stripe – 4.25 (April 25th).

The blue portions are also overlayed with text reading:

Eng: For the unification and independence of the motherland, and the freedom and happiness of the people.

These slogans are now in use on all KPA flags, prior to 2011, the text on all flags read:

Eng: Let us defend the headquarters of the revolution headed by the great Comrade Kim Jong Il with our lives! 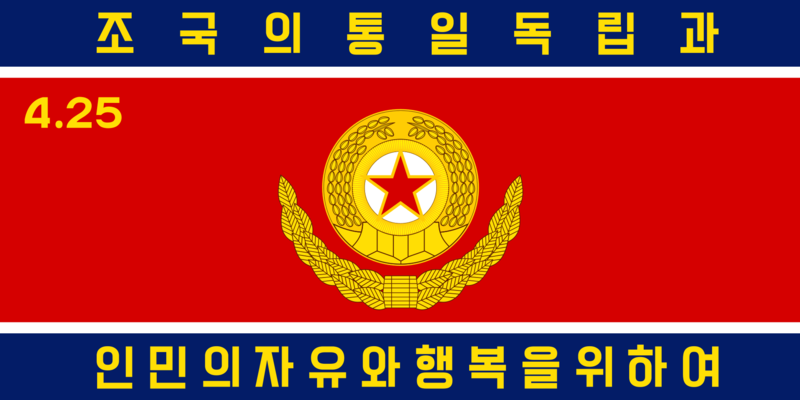 A white top-half and dark blue bottom-half separated with blue and white stripes.

This design likely represents the sea stretching to the horizon.

The same KPA cap badge as with the army flag is present with a larger gold wreath and an anchor on top.

The same text as the army flag adorns the naval flag. 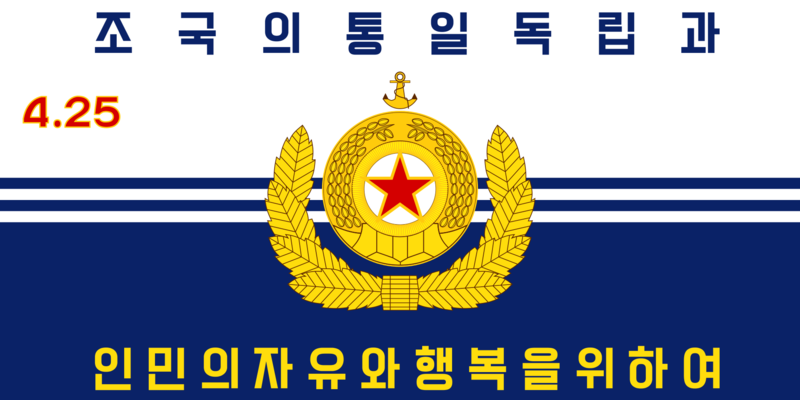 The air force flag has a light blue background with a dark blue stripe at the base.

The two colours are divided by dark and light blue stripes to represent the horizon.

The KPA emblem is adorned with wings rather than a wreath with the same text as the other flags. The SAS of North Korea. The flag is dark blue in colour with the KPA emblem surrounded by a golden wreath with the ‘Big Dipper’ constellation emblazoned on it.

The constellation designed is also present beneath the ‘4.25’ in the top left corner. 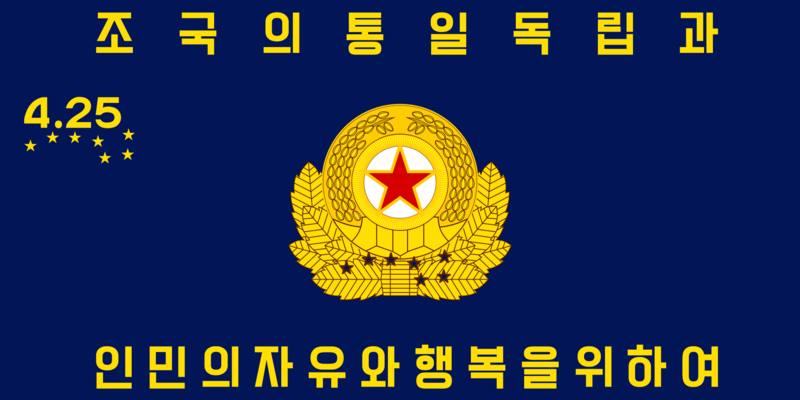 Strategic Rocket Force
A green flag with the KPA emblem in the centre with a golden wreath atop a half globe.

This design likely represents the ability of the unit to strike anywhere in the world through its tactical missile program. 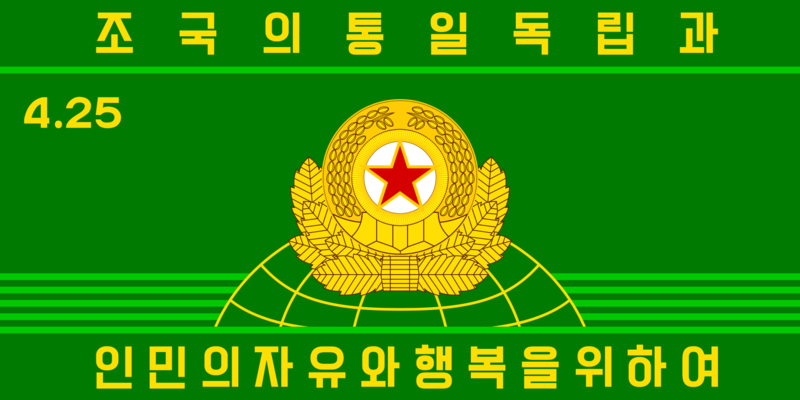 Worker Peasant Red Guards
The paramilitary force of North Korea. The flag of this civil defence force shows a red star with yellow outline (a very soviet style design) surrounded by a gold wreath on a red background.

The familiar ‘4.25’ and military slogan are also present.

Since the WPRG is not part of the Korean People’s Army, there is no cap badge style emblem on the flag. 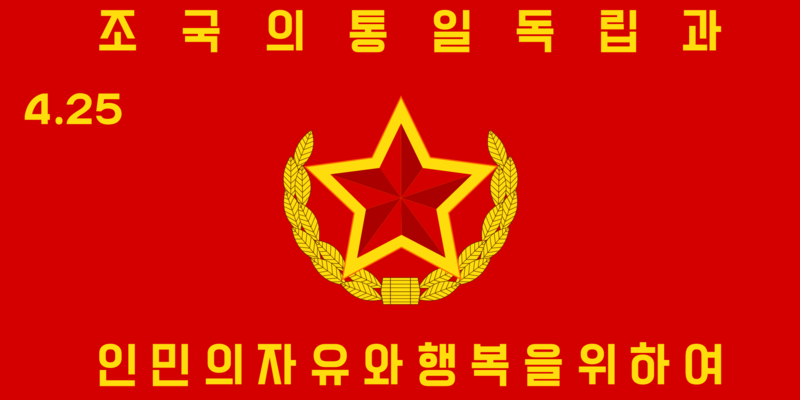 Reverse
Each flag has a different design on the reverse.

The military flags keep their basic design but replace the KPA emblem with a Worker’s Party emblem.

The wording also changes to say: 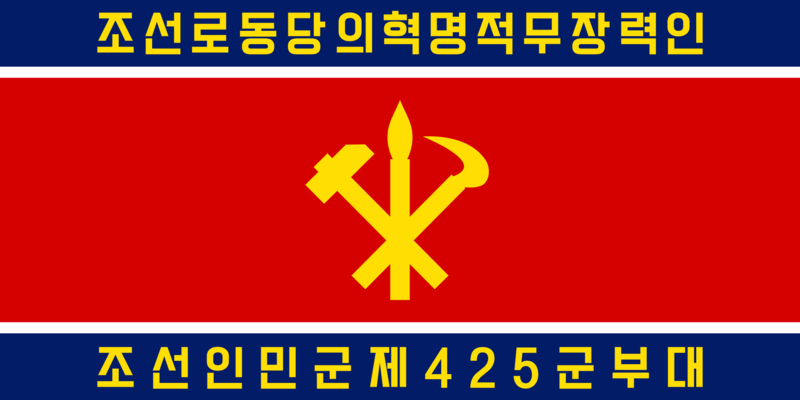 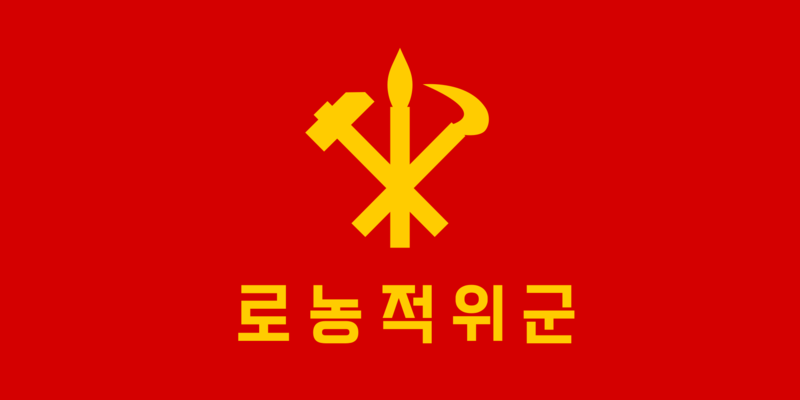 The flag of unification is used both in North and South Korea as a symbol for national reunification.

On occasion when both Koreas are working together, they will use this flag to represent both of them together.

For example, during the 2018 PyeongChang Winter Olympics, the two Koreas competed under this flag as a unified team.

The flag shows a light blue Korean Peninsula on a white background. 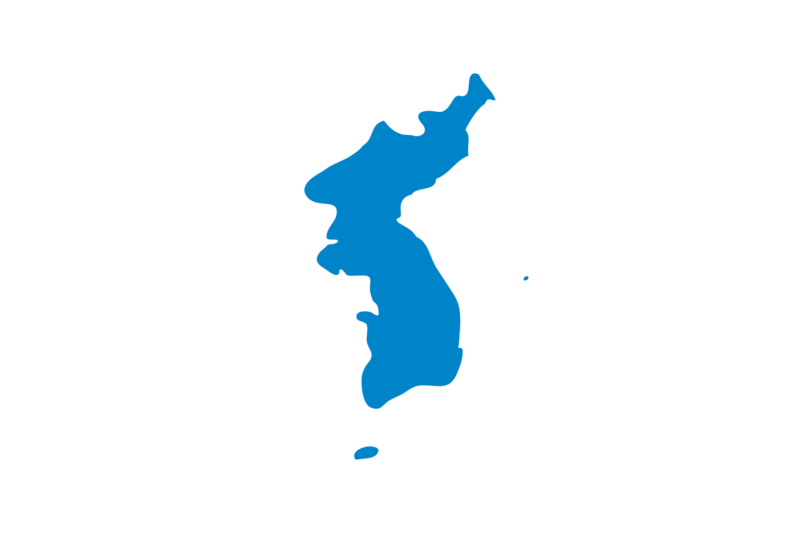