The flag of Angola, at a glance, looks like one of the most blatantly communist flags anyone could come up with.

Until that is, you notice that the hammer and sickle are, in fact, a cog and machete.

The Angolan flag was adopted in 1975 and is teeming with symbolism and meaning, despite it’s simple, yet eye-catching design.

Despite a new proposed flag being introduced, and then not implemented, in 2003, this flag has been the official symbol of Angola 45 years. 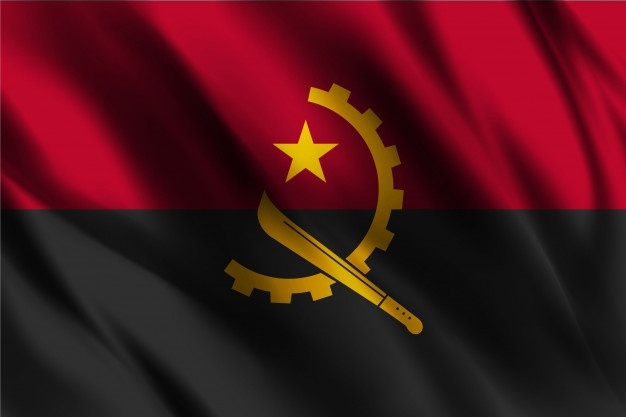 The Angolan flag consists of a red and black background, upon which a yellow machete and half-cog are emblazoned in the style of a traditional hammer and sickle.

Inside the cog is a yellow star which represents international solidarity and progress.

The red bar represents bloodshed during the period of anti-colonial revolution against Portugal.

The black bar is symbolic of Africa. The colour black is common around the continent and is regularly included in flags as a symbol of solidarity with the continent as a whole.

The gear represents factory workers, whilst the machete represents agricultural workers, the peasantry, and the armed struggle against their colonial oppressors.

Despite the apparent reference to the hammer and sickle, the flag is a near-exact copy of the People’s Movement for the Liberation of Angola (MPLA) flag.

The MPLA flag has the same red and black background with a simple gold star in the centre.

This is no coincidence. The MPLA was one of the significant movements against the Portuguese occupation of the territory.

It made up the most significant opposition to Portugal’s military during the Angolan War of Independence (1961 – 1974).

The movement then went on to defeat another anti-colonial organisation, UNITA, which it had fought alongside during the independence war, during the 1975 – 2002 Angolan Civil War.

For this reason, the movement’s flag became synonymous with Angolan strength and independence. The movement later became the country’s ruling party.

Since it’s introduction, two alternatives have been devised and struck down. The first, in 1996, was a red, green and black horizontal tricolour. References to the MPLA were all but absent in the redesign, which was not approved by the legislature.

In 2003, another redesign, eerily similar to North Korea’s flag, depicted a sun in the centre, in the style of a traditional African cave painting, on a background of red, white and blue.