Where does Chollima come from..?

Chollima is an important symbol in the DPRK, and can be found through the society in North Korea - both within the language and as physical statues and symbols. It is used as the nickname of its national association football team, and also gives name to North Korea’s economic development movement; the Chollima Movement. It’s also the name of a metro line and can be seen on North Korean money and stamps.

After the Korean War, the country required rebuilding to function again. In order to expedite the construction, President Kim Il-sung devised the slogan "rush as the speed of chollima”.

Today, the Chollima in North Korea is synonymous with great speed and progress in the DPRK.

So, where does this Chollima come from?

Let us dash forward in the spirit of Chollima!

The Chollima horse is originally based on a Chinese mythology. It is said to be able to travel 1,000 ri (400 km) a day. The Chollima horse resembles something similar to Pegasus, the winged-horse of Greek mythology. The word itself can be translated as ‘Tousand-Ri-Horse’.

Kim Il-sung first introduced the term Chollima in December 1956,[5] shortly before the start of the 1957-61 five-year plan, used to energise and encourage workers in North Korea to bring it up out of the rubble left from the Korean War.

Chollima Over the Globe

Chollima goes by several names in East-Asia; Chollima, cheollima, and senrima. Since the 3rd century BCE, Chollima has been used as a metaphor for exceptionally talented people and animals.

Around the beginning of the 3rd century BCE, the mythological horse-tamer Bole is mentioned in Chinese classical literature. This horse-tamer is frequently associated in various classics with Chollima, or the qianlima (千里馬) in Chinese.

The Japanese professional middleweight boxer Keitoku Senrima uses the stage name Senrima, referring to North Korea’s Chollima. This is an expression of his heritage as a Zainichi Korean (Korean Japanese). 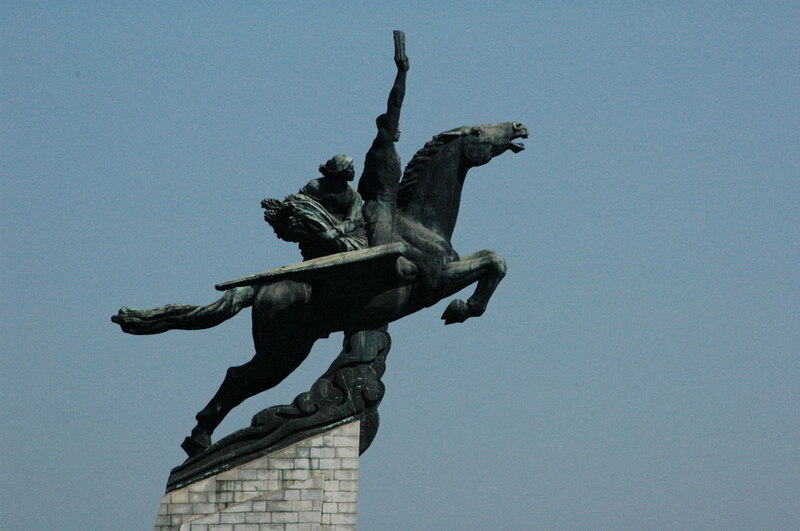 The Chollima Movement in North Korea was a movement launched in the late 1950s promoting and encouraging workers to work harder and ‘at the speed of Chollima’.

Successes of this Chollima movement were first seen in the late 1950s with workers in a factory in Kangsong, not far from Pyongyang. Since then, the slogan ‘Let us dash forwards in the spirit of Chollima’ has been adopted.

During the Chollima Movement 5-year plan, North Korea had an annual industrial growth of 36.6%.

Such quick production however comes at a price, and quality was compromised for speed. Resources also began to wear out, as perhaps the motivation and efforts of the people.

In North Korea today, Chollima has now developed into Mallima in terms of the speed in which the country is ‘dashing forwards’.

‘Mallima Speed’ therefore refers to a new and developed idea of the Chollima horse that runs much faster. That's 10x as fast as the original Chollima horse idea, 10,000 ri (3,900 km) per day.

The Chollima Statue (천리마동상 | 千里馬銅像) is a monument on top of Mansu Hill next to the Mansudae Grand Monument — the large statues of North Korea's leaders in Pyongyang, North Korea.

It is a statue of a winged mythical horse named ‘Chollima’, which symbolises the Stakhanovite 'Chollima Movement' which helped rebuild North Korea following the Korean War.