Soju is light in taste, cheap, and not too strong.  Does Soju alcohol have the potential to take over beer and wine?

What is Soju
How to Drink Soju
Where to Buy Soju
Soju Flavours
Soju vs. Sake
History of Soju
North Korean Soju vs South Korean Soju

Soju (소주) has become the world’s most consumed alcohol, despite the fact that it remains largely a Korean alcohol, and hasn’t yet hit the global market too much. Whilst readily available in South Korea, China, and Japan, most of the West has yet to hear of this Korean alcohol.

Soju is light in taste, cheap, and not too strong.

Does Soju alcohol have the potential to take over beer and wine? 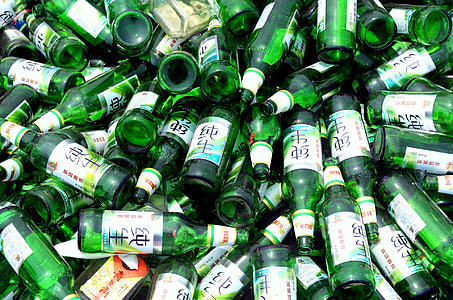 Traditionally, soju alcohol is made from rice, wheat or barley. Now, many producers replace rice with potatoes and sweet potatoes.

How to Drink Soju

Soju is usually drunk straight. Drink this Korean alcohol from small shot size glasses. Never drink Soju from the bottle. It should be drunk with food and usually in company.

Step by step on how to drink soju like a pro;

Step 1: Shake the bottle before opening, and hit the bottom of it.
Step 2: Open the soju bottle.
Step 3: Hold the bottle with two hands, not showing the label to your drinking buddy. Gently pour their glass 3/4 full with one hand concentrating on pouring, one hand holding the bottom of the soju bottle.
Step 4: Allow the other person to fill your glass.
Step 5: Take you glass with both hands, turn your head to your side, don’t make eye-contact with the person who filled your glass.
Step 6: Drink all of the first glass (shot it).
Step 7: Fill up your partners glass - and go again.

If drinking soju straight isn’t your thing, there are a few kind of mixed drinks and cocktails you can have.

One of the most popular ways to drink soju in South Korea is my drinking ‘somaek’(소맥). This soju cocktail is a mixture of beer (maekju, 맥주) and soju, hence the name. You simply take a shot glass of soju and drop it into a pint of beer.

If you need something sweeter, there are many different flavours of soju available (see below).

Where to Buy Soju

Soju is readily available at generally any convenience store or shop in South Korea. If you’re not in South Korea, you can find it at some bigger stores, supermarkets, speciality liquor shops, or usually at Korean restaurants.

Without anything added, soju has a very crisp taste. It is something that resembles vodka, except a little softer. It is halfway from the light, smooth taste of Japanese sake and the strong deep taste of Chinese baijiu, Japan and China’s version of soju.

There are too many soju flavours to list them all, and indeed there are new flavours being constantly produced all the time.

In North Korea, you will find more subtle flavours such as acorn and pine. You won't find such sweet flavours in North Korea, and the soju has a stronger taste.

Japan has a similar spirit to soju called shochu. The production methods are similar and it is also distilled from a variety of grains such as soju, i.e. rice, sweet potato etc. The alcohol content is a little less, with most shochus averaging around 25%-30%.

As soju, Japanese shochu has a very clear flavour, a bit more delicate than soju and sometimes a bit sweeter. It can also be mixed with fruit juices to add to the sweetness, or drunk straight or on the rocks like whiskey.

Japanese sake is different again. Sake is a brewed alcohol, whereas shochu is a distilled liquor. Sake has a more distinct taste, and it is less light and more full-bodied. Each brand and bottle tasting very different. It usually has a lower alcohol content at around 16%.

Soju dates back to13th century Koryo when the Mongols introduced the process of distillation to Korea.

Distilleries were set up in Kaesong in the southern part of current North Korea. Kaesong was the capital of Korea at this time.

Home-brewing developed in Andong where the Mongol’s located their logistics base.

Originally, soju alcohol was a Korean alcohol with 35%. However, in. 1965 diluted soju alcohol at 30% appeared. This was down to the South Korean government banning the tradition distillation of soju from rice. They banned the use of rice during this period to alleviate rice shortages. This started the use of potato and sweet potato to make soju instead.

This prohibition was lifted in 1999, but many manufacturers still carry on producing soju in this way.

Soju already has a light taste that doesn’t startle you too much even when shotting it, so adding sweet flavours to the mix can be dangerous. Resembling more like a sweet drink by the time flavours are added, it is easy to drink a lot without realising.

Soju will hit you. So drink responsibly.

The main thing to remember when drinking soju is eat whilst drinking (Korean food is always a good choice, especially BBQ!), consume with friends, be aware of and hold up drinking etiquette, don’t drink too much - and enjoy!

As a big part of traditional Korean culture, this Korean alcohol remains to be a big part of life in both South Korea and North Korea.

But like many other things in the two countries, soju has developed differently over the years.

Whilst South Korean soju evolved to have a softer, sweeter taste, with many different and strong flavours drowning out the traditional "soju" taste, North Korean soju maintains much of this alcoholic flavour. It tastes more like you're actually drinking a pretty strong drink. The flavoured soju is made with softer tastes such as acorn and hazelnut. You won't find typical South Korean flavours such as blueberry and strawberry in North Korea.

Where can I buy North Korean soju?

And there you will find ample different kinds of soju in local supermarkets such as the Kwangbok Supermarket, in bars, and in restaurants.