War! what is it good for? Museums

The Military Museum of the Chinese People’s Revolution

Cost: Free! But at the time of writing, this museum must be booked before you visit. Use the WeChat miniapp or contact via the website (bring passport or photo ID) First opened in 1960, the Military Museum of the Chinese People’s Revolution is one of the oldest and most famous in Beijing, it even has its own subway station! This is actually one of the ‘Ten Great Buildings’ erected for the 10th anniversary of the success of the Chinese Revolution in 1959, so it has a storied history, and is absolutely massive too!

This museum is clearly based on a soviet style of architecture, which makes it stand out in today’s Beijing, and it gives off the general vibe of an important museum just by being so towering, and the inside is even more impressive than the outside.

Exhibitions are spread over four floors plus a vast basement, at the time of writing the third and fourth floors are not open and the exhibitions there (‘Gifts for Military Diplomacy’, ‘Halls of Heroes and Models of the People’s Army’, ‘Exhibition of National Defense and Army, Building’, and ‘Revolution and Military Artworks in the Collection of the Military Museum’) are therefore not available to visit. This is disappointing in some ways, but also a blessing as it already takes at the very least two hours to do even a cursory walk around the other floors which are open; be sure to budget enough time t visit this enormous place.

Upon entry to the museum the first hall (which bears a very close resemblance to the main hall of the Grand People’s Study House in Pyongyang) has a statue of Mao Zedong, and is surrounded by reliefs showing key military events in Chinese history. Then the various halls with permanent and temporary exhibits begin. 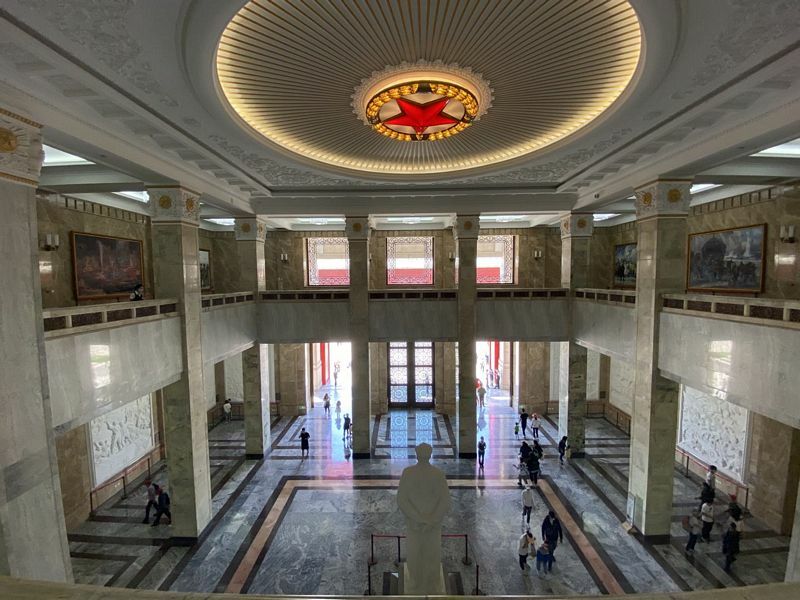 At the time of my visit (late May 2021) a huge exhibition on the Korean War (in China this is known as the War to Resists US Aggression and Aid Korea) was still running, given that 2020 was the 70th anniversary of the outbreak of this conflict. This exhibition is very well done, really interesting, very popular with visitors, but all in Chinese with no translations whatsoever (odd given that this is a new exhibition, many other exhibits in the museum have translations – perhaps producing a leaflet for the Korean War part would have been a good idea?) – anyway if the intention is to get a full understanding of the Chinese version of this conflict here then a guide might be a good idea, although the museum guides I saw did take a rather dogmatic approach to their speeches, so that could be part of the experience too!

This exhibition is hugely propagandistic of course, no surprise there, but the whole museum is like this (for all the glorification of the armed forces here I found zero mentions of the disastrous adventurism of the war with Vietnam in 1979, not glorious enough to get included here I suppose). For those interested in the Korean War this exhibition is worth the visit to the museum alone. 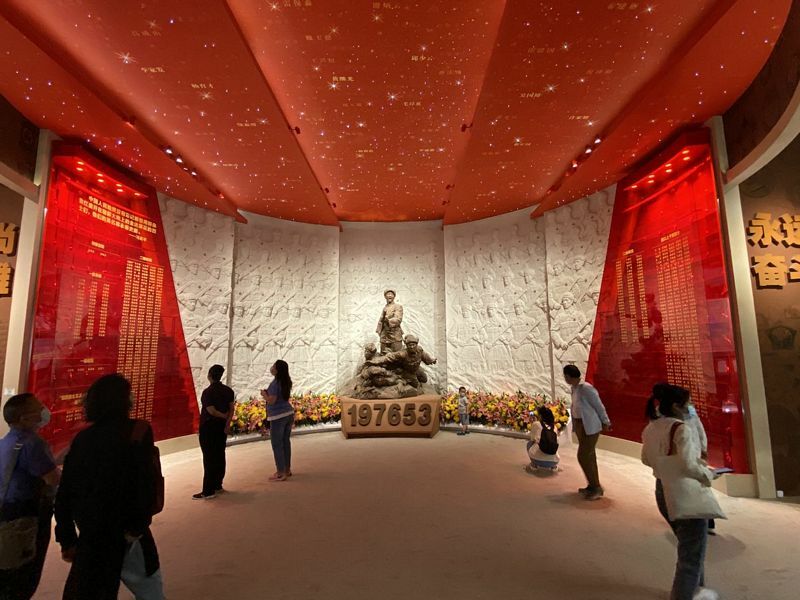 Also on the first floor is the cavernous main hall, now this is a stunning collection of aircraft, some on the ground, some hung from the ceiling dozens of metres above; Chinese aircraft, Soviet jets, Japanese and western planes, too, it’s wonderful and great fun, and the school groups and kids (as well as adults) who were there at the same time as me seemed to love it. Info on each plane is fairly light though but if you can understand Chinese then there are QR codes for more info spread around the place, if you can’t, or you don’t use WeChat then you’re out of luck in this case.

The basement too is where the real gold lies; with a vast array of tanks, mortars, field artillery, and all kinds of land weapons, plus an actual U2 (one of five Taiwanese U2s shot down in the early 1960s), which is very well-presented. It’s very well displayed, and for me a real highlight to see this amazing aircraft. 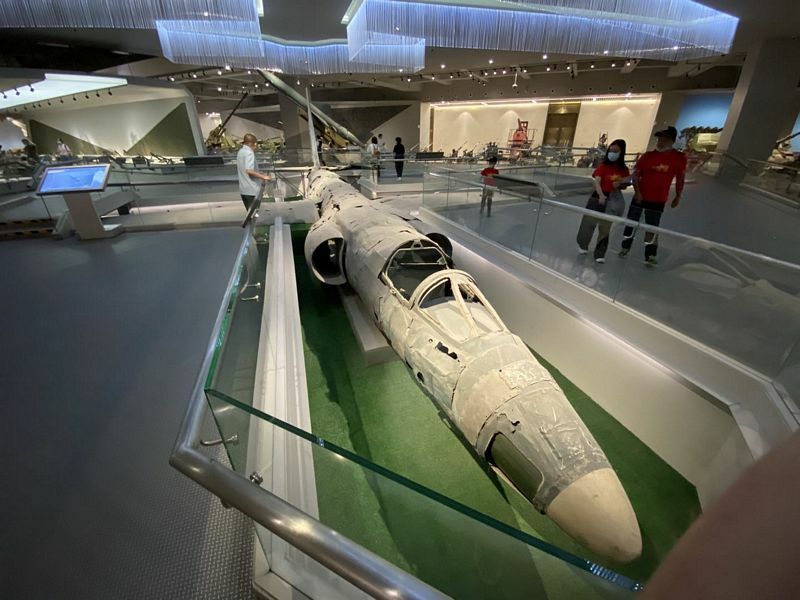 Up on the second floor, at present the highest one can go in the museum, are some smaller (but still large) exhibitions on peaceful nuclear weapons, missile development, and the navy, as well as displays about the modern armed forces which came across as a recruitment section for those a little too into the kind of weapon porn that such museums specialise in (not really a criticism, I mean I love War Museums, but still prefer a balance of some reality checks about the hell of conflict when mixed with the usual martial glory, this museum definitely lacks the former and dwells on the latter).

The upstairs exhibits are not as interesting as the main lobby and basement displays of machinery, but this is perhaps only because there is no way to compete with all that hardware, and the scale of the whole thing. The corridors on the mezzanine level that display a huge range of pistols and rifles suspended in see-through cases though are very well done, even if the sheer volume of guns makes it hard to focus on learning much, but it does look cool for sure. 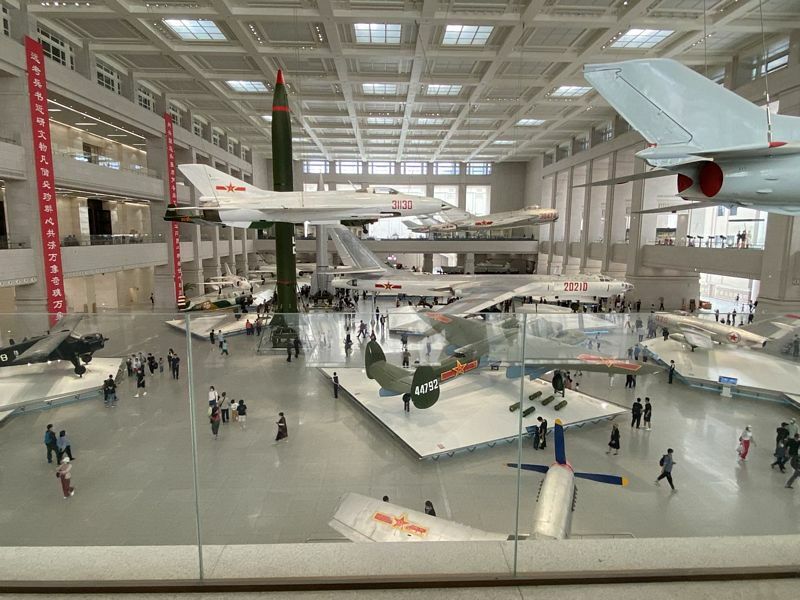 A major omission in this museum; anywhere to eat or drink – the place is utterly huge, even with some floor and halls not in operation, and so a canteen or coffee shop would be a sensible and welcome addition, instead after a couple of hours the halls end up filled with people sitting on the floor, eating some rubbish from the occasional vending machine, and recharging themselves, this could be avoided with some planning. There are other large museums in Beijing that have places to eat when a visit will end up taking half a day or more.

There are a couple of shops, both selling the same stuff, with some military models, t-shirts, tote bags, magnets, and so on. Not amazing, but good enough for souvenirs anyway.

In general The Military Museum of the Chinese People’s Revolution is a very strong recommendation. I had never been here before (despite being over two decades in Beijing and having intended to go the week I first arrived) and it is clearly one of the most impressive museums around in terms of structure. But in terms of learning the martial history of China it is not actually that much use compared to other sources, and the main reason to go (in my opinion) is to be impressed and geek-out a little on the hardware on display.

Be sure to budget enough time when visiting this museum, and absolutely book ahead. At this stage of the Museums of Beijing project I have been to more than sixty museums and this is one of only three in which I really had to make a reservation and couldn’t just show up. A visit of two hours is enough to see everything and nothing more, allow more time than this to learn and to proceed at a leisurely pace. 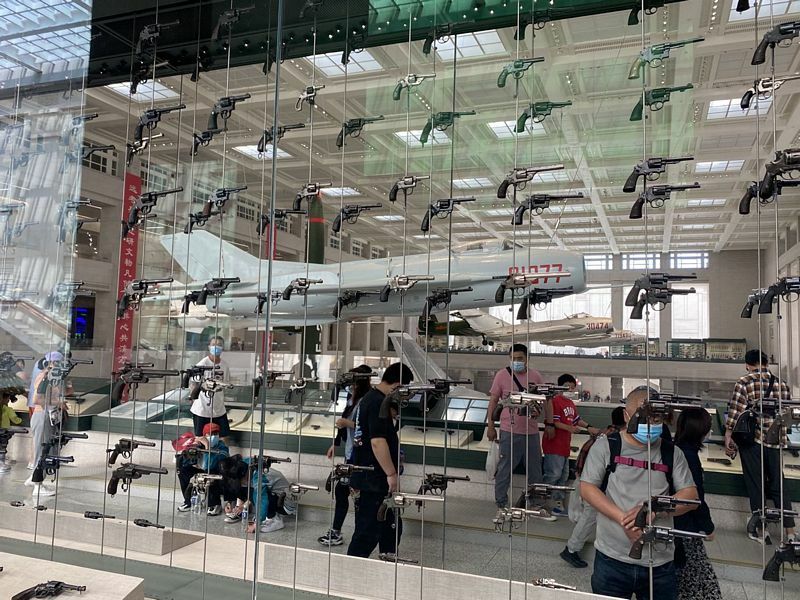