Location: 23 Jianguo Road, Chaoyang District, Beijing. Nearest Subway Station is Gaobeidian (but if coming from central Beijing it is better to simply walk from Sihui East Station, around 700m away, to avoid changing lines just for one stop)

Cost: 50 RMB (Although it is free during the Covid pandemic) 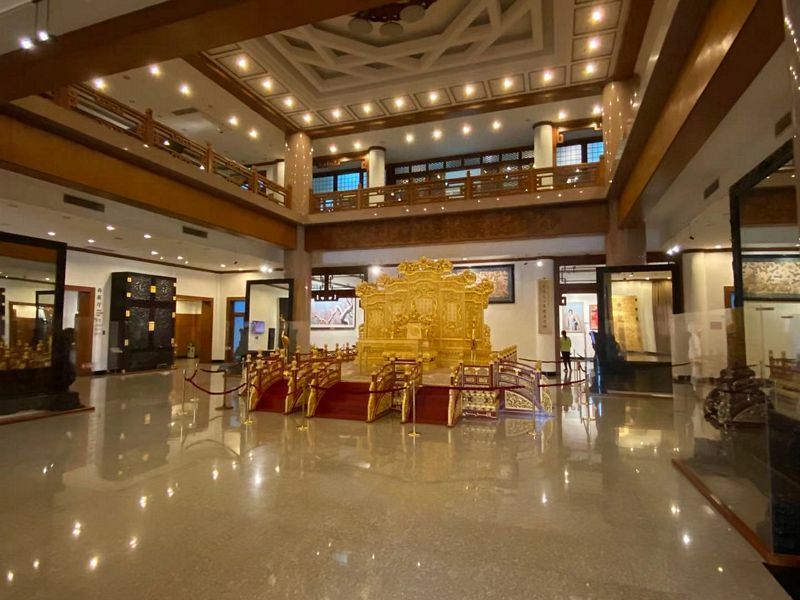 The Red Sandalwood Museum is a stunning building, purpose-built in 1999 and claimed China’s first and the world’s largest private museum specialising in Red Sandalwood (although how big the second largest is….is unknown to us!).

The Red Sandalwood Museum is the brainchild and passion-project of Mrs. Chan Laiwa, a fascinating woman who was born in the Summer Palace in Beijing as the descendant of a noble Manchu family, fell into poverty and then started a furniture business, moved to Hong Kong, became absurdly wealthy, and then returned to Beijing and now lives in the museum itself. Her presence is everywhere in fact with paintings, portraits, videos, and even a section devoted to her meeting with various notable world figures from Ronaldo to Hamid Karzai (who gave her a rather nice carpet). 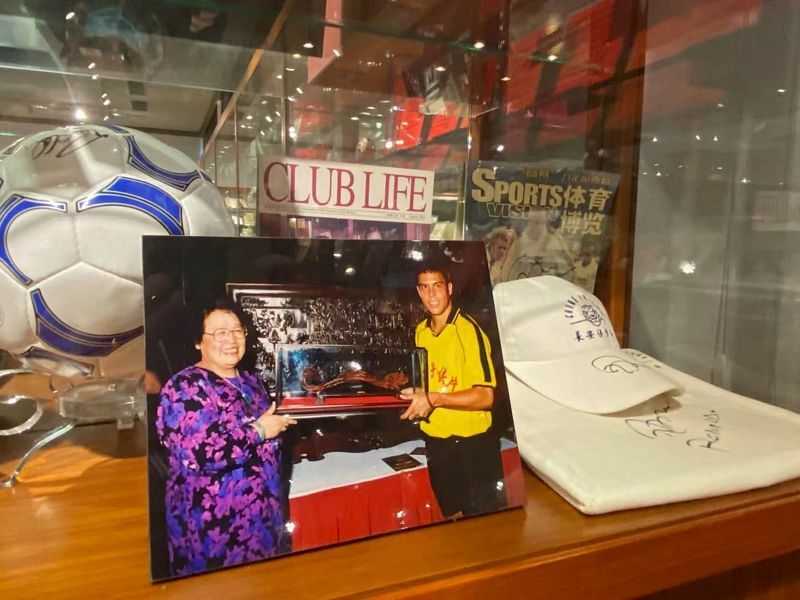 Mrs. Chan is obviously not short of a renminbi or two as the museum cost hundreds of millions to build and maintain, plus the collection is near-priceless as red sandalwood (and the other woods present, it is not all the same stuff) is exceptionally expensive, in fact in the gift shop even a small wooden bookmark goes for around 200 RMB (around $30) so some of the larger pieces, made from literally tons of the stuff, must hold immense value).

What about the collection then? The building is impressive and worth a look all by itself (plus the bricks are held in place by glutinous rice, a fun fact!), but it is the four floors of furniture and wooden items that are the main attraction here, and they do not fail to impress at all!

The first floor is made up of a central area in which a replica of the imperial throne from the forbidden city takes centre stage – deeply intricate, very uncomfortable looking, but simply stunning. And in the wings of the floor more massive pieces of furniture made from Red Sandalwood and other valuable woods show the incredible quality of the craftsmanship that goes into such pieces. The same on the second floor as well, with sample entry rooms claimed to be characteristic of the Ming and Qing Dynasties being particularly interesting, although the fact that these would be of the type found in noble homes rather than among the commoners is not noted, maybe just to be assumed? 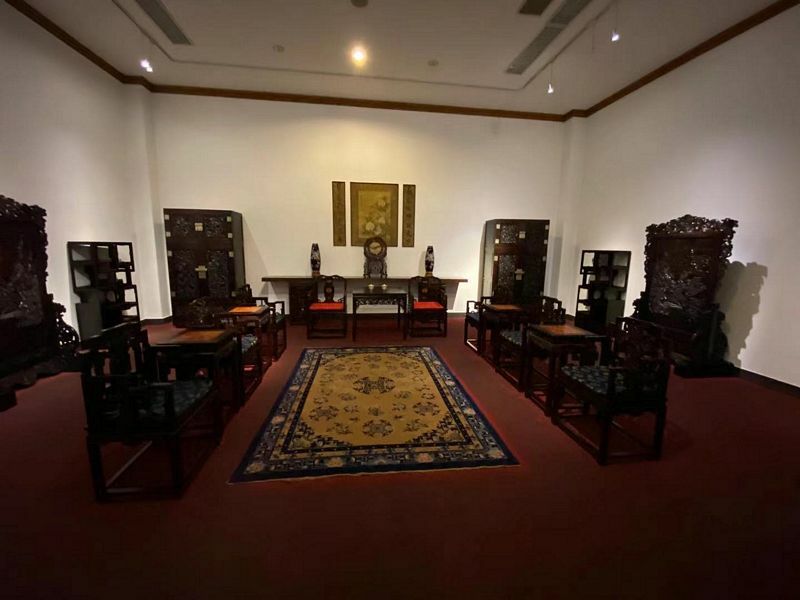 Of particular interest are models of famous buildings, all significantly bigger than a person. Towers from the Forbidden City are very well done, as is a great model of Yongdingmen, one of the Beijing city wall gates (from a set of all sixteen of them, very few of which are still extant). Up on the third floor though this kind of thing gets even more impressive with massive models of one of Beijing’s famous Hutong Courtyard buildings and a Prince’s Palace on display. On the fourth floor the central building of the Temple of Heaven is rendered in Red Sandalwood, and it is utterly stunning indeed. 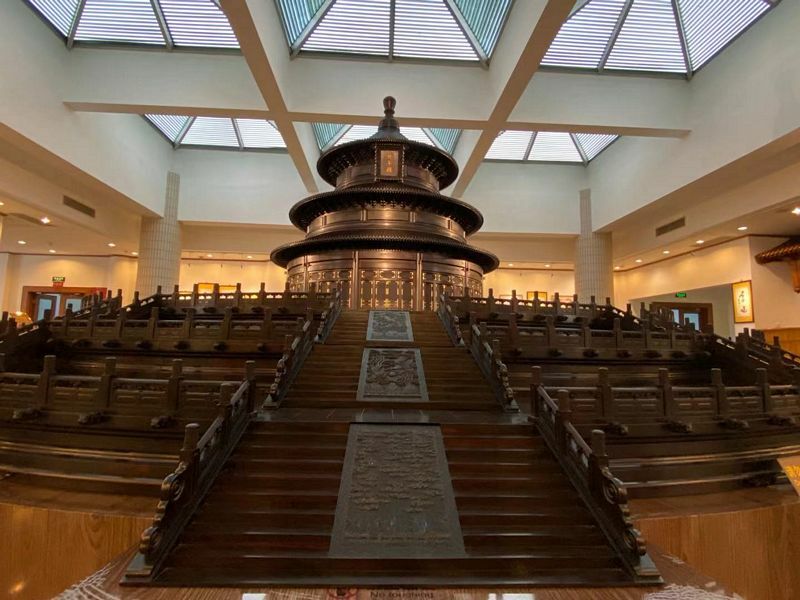 So the Red Sandalwood Museum may come across as something of a furniture showroom, for the kind of stuff that you can never actually afford, nor would find particularly practical anyway (which is perhaps why it is all in a museum), and these are replicas for the most part anyway, but the craftsmanship is a thing of beauty, I was especially taken with a man-sized carving made from a tree root featuring scenes from the Monkey King, and also some of the furniture made by former head of the Chinese People’s Political Consultative Conference (it’s a government thing, pretty important in China) Li Ruihuan while being persecuted during the Cultural Revolution, which was less show-offy than most of the imperial replica stuff on display (Li was known as a carpenter, so it was not just a hobby of his). 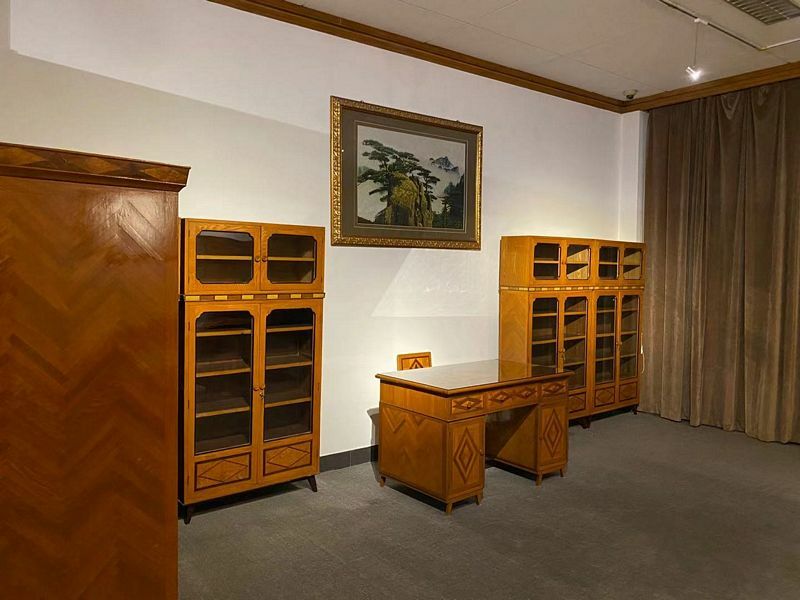 The Red Sandalwood Museum is one to recommend, even if it is a little bit out of the way over in east Beijing, and also being a collection of a wealthy lady’s furniture means it is perhaps a little niche for anyone visiting Beijing for a short trip only, but it is a huge space with loads of impressive stuff in it, so well worth a look for anyone looking o do something a bit different. Plus, just half an hour or so away on foot is the Furniture neighbourhood of Gaobeidian where you may be able to commission a cheaper version of one of these items out of something cheaper than Red Sandalwood for your very own palace/museum/flat. 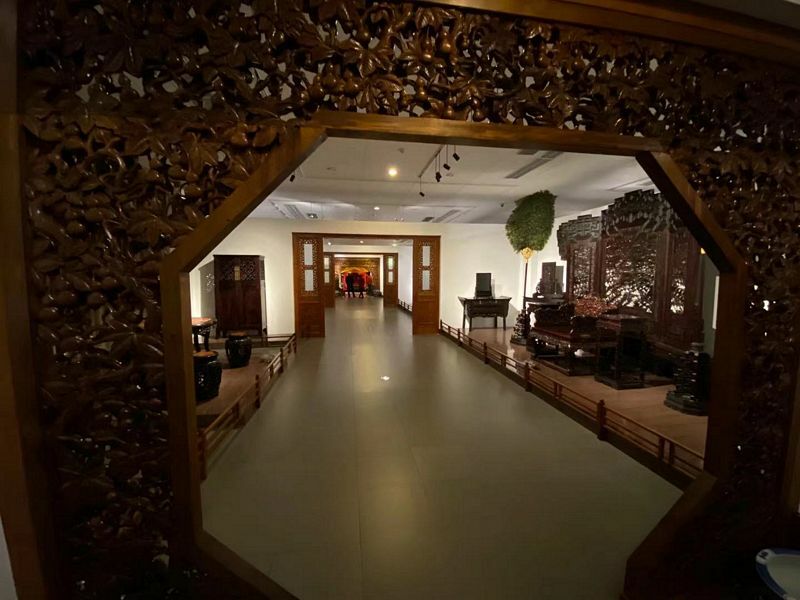