The Beatles Statue in Ulaanbaatar

If you've visited Ulaanbaatar Outer Mongolia since the country gained its independence, you will doubtless have spotted or happened across the capitals rather attractive Beatles statue.

Its central location, pleasant design makes it a simple must on any visit. If you haven't been, do make sure you stop by, if you've already visited be sure to take a glance in the future and if you are already there call by for a quick visit.

History of the Beatles Statue

Considering the Beatles never visited Mongolia and this far-flung country was not mentioned in any of their hits people may wonder as to how this rather incongruous monument has become somewhat of a local icon.

The story begins way back in the 1970s when during the Soviet period in Mongolia's history,  most forms of western music were banned and what did exist had to pass a rather strict sensor. During the 70s and 80s, Ulaanbaatar had a lot more open green spaces then it does today; it is one of these areas where the statue is now located.

The reason for its location is that in this neighbourhood, local youths would gather and listen to outlawed music, including that of the Beatles.

Some locals will even say that the Beatles' was an inspiration for Mongolians to fight for their democracy. Whether this is true or not fast forwards to the early 90's the collapse of the communism and Mongolian independence.

As the statues of Lenin were coming down the local community at Chingeltei 3rd district decided it was time to raise a new monument to their heroes. And the Beatles monument was erected using money received from local donations. 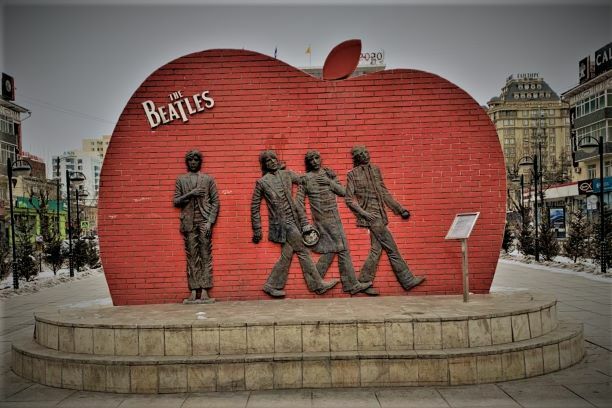 About the Beatles Statue

Designed by the architect B.Denzen the statue incorporates elements of Beatles fandom as well as acknowledging the reason for its construction.

At first glance, you will notice the whole monument is in the shape of an apple; this is a handshake to the record company apple records founded by the Liverpudlian fab four.

The Beatles themselves cast in bronze stand on the south side of the statue,  John, Paul (barefooted), George and Ringo cast at their 70s best.

On the Northern side is the real reason for the existence of the monument there is a depiction of a young man sitting on some stairs, strumming a guitar. This image pays tribute to the many Mongolian youths who grew up in the surrounding soviet style apartment blocks daring to listen, play and take inspiration from the Beatles and other artists.

Stories of the Statue

For years the meaning of the statue appeared lost especially by the younger generation. The monument had become a place for courting couples to meet, graffiti artists to etch their names and nearby pubs to post-event fliers. However, in 2017 residents awoke to the sound of bulldozers and the area fenced off.

The square had been hastily torn up, and it looked like the monument was to be demolished.

Again the local population had to stand up this time making a stand against capitalism and developers the neighbourhood mobilised, and protests began. Luckily these demonstrations paid off, and after some rather odd back-peddling, it was announced that all the bulldozers and workers were only there to help tidy up the monument and the square was hastily relaid. 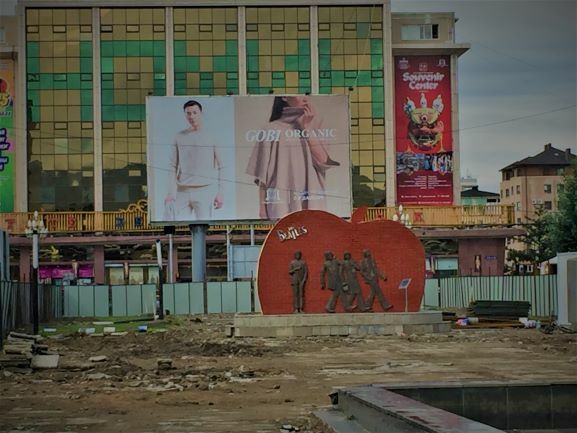 Getting to the Beatles Statue

Located not far from the front of the state department store the monument to the Beatles is in a public space; you can walk by it at any time for free.

Small shops, restaurants and cafes surround the square which is home to the fab four.
Why not shop for that cashmere gift grab some lunch then admire the statue and ponder its origins whilst sat in the open enjoying a latte.