A Paean to North Korean Hotels (Pre-renovation) from someone who’s been going there for over 25 years.

Unfortunately, hotels in North Korea on the tourist route outside Pyongyang are also being renovated.

That brings with it both the positive and negative.

In fact, it was the old ‘negatives’ that make staying in them memorable.

I can’t remember much about the Grand Hyatt in Shanghai, but I cannot forget the Taedong Hotel in Pyongyang, North Korea.

(The barbecue restaurant got a bit hot one night and the hotel burnt down and has been in various stages of rebuilding ever since.) 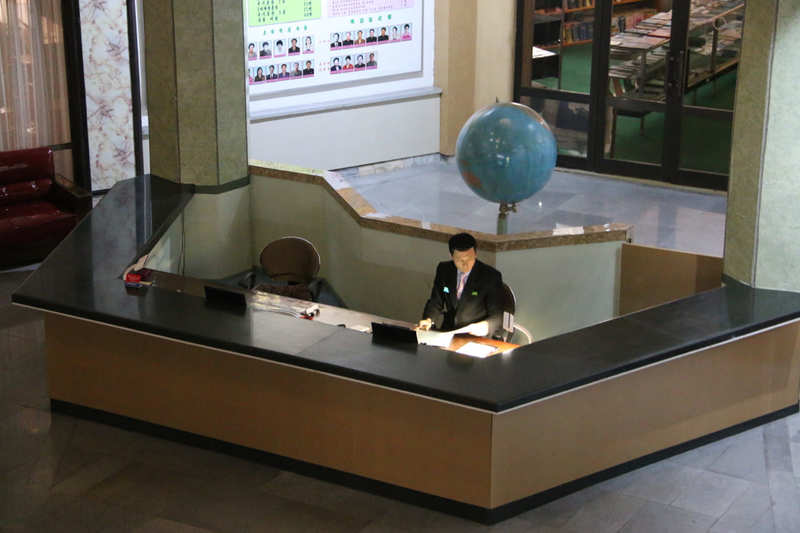 In all North Korean hotels, there is be a lobby dwarfed by a painting featuring the leaders Kim Il Sung and Kim Jong Il (likely with a fan to keep the paintings in good condition throughout summer).

You should not trundle your bags directly in front of this tableau, rather take a wide sweep.

Almost always the reception has a world map.

This generally shows the whole of the Korean peninsula in red - never showing the 38 parallel division. 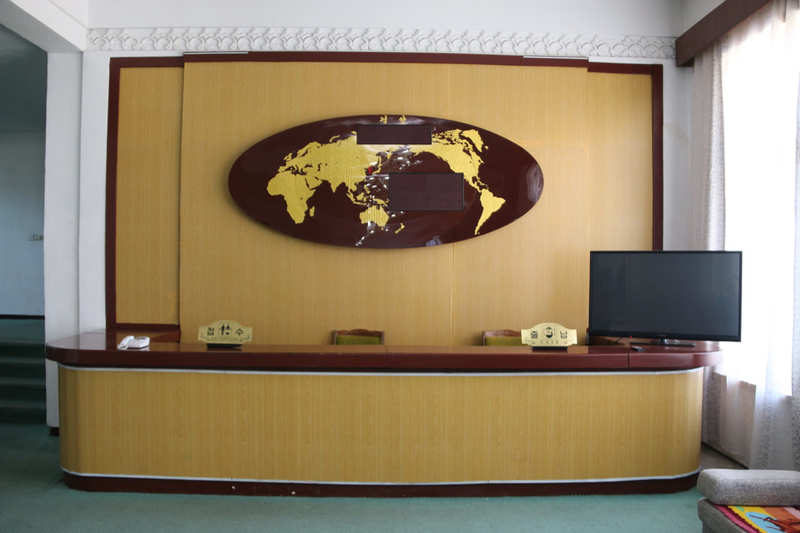 Entertainment in a North Korean hotel means you sometimes have to be imaginative.

A typical evening may consist of a quick glance around the foreign language book store (still stocked with postcards from the 1980s) followed by supper, often in a hidden room along a long and high corridor with long and high doors opening onto darkened rooms.

Evening entertainment is a worn pool table (where all shots will take on the slight curve of the table). And, the coolest of bars where you are served by friendly if somewhat confused bar staff who rarely see so many foreigners at one time.

Bar stools have a wonky slant but drinking helps balance this out. Most North Korean hotels will give you the choice of soju, bottled Korean beers, Heineken or Sapporo, a wine from Romania or pseudo-McSomething named whiskies which have never seen Scotland. 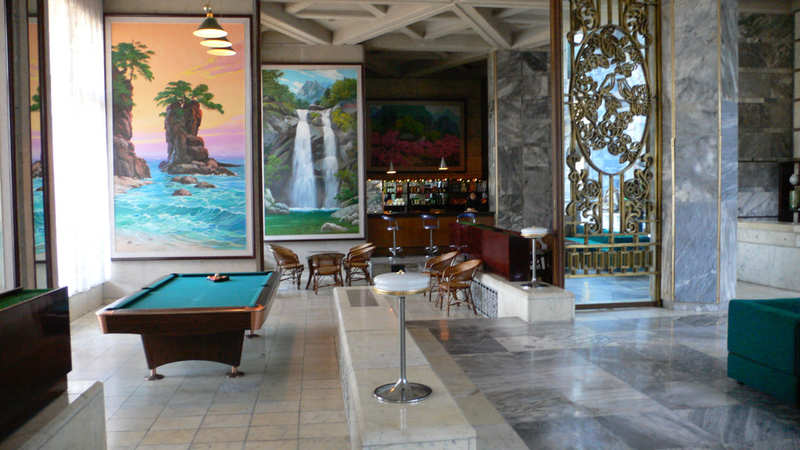 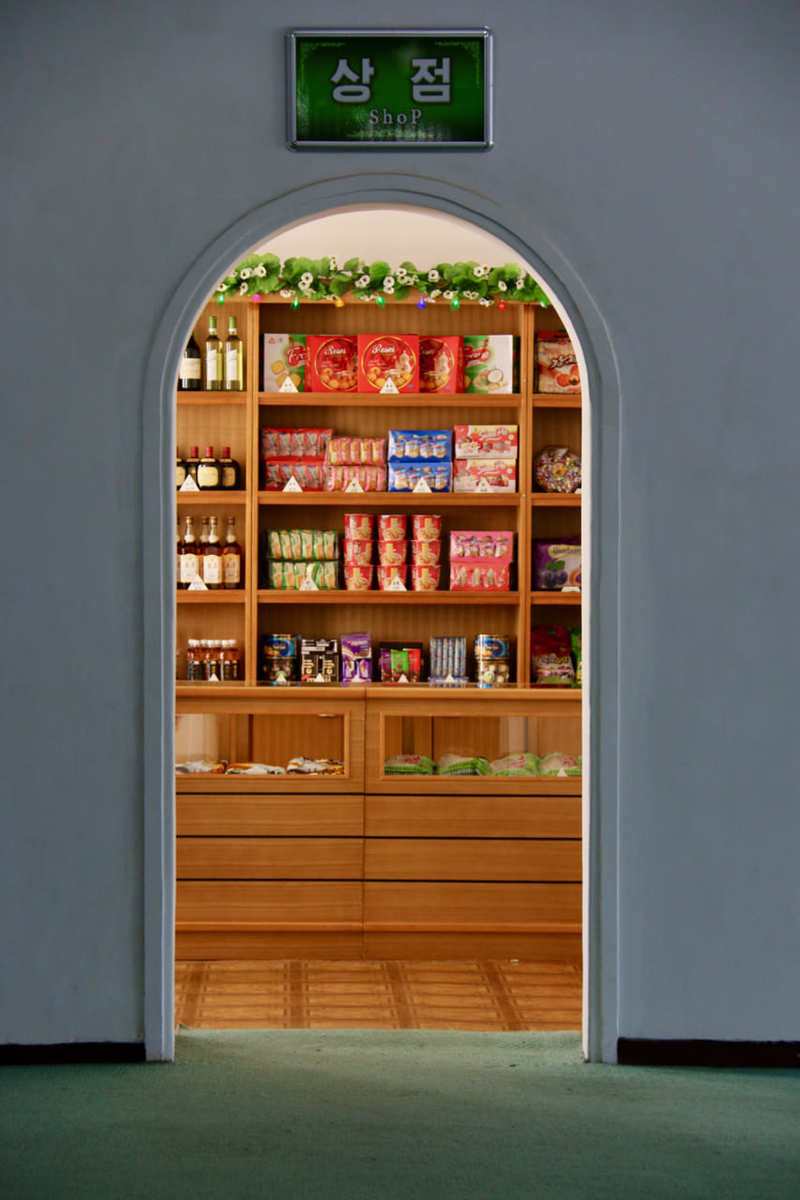 Bedrooms with a blast of thermonuclear underfloor heating, turned off and empty mini-bar fridges, tv with crackly Korean tv only, a telephone (where you can ring but won’t be understood, but even if you were there is not a lot on offer) the most impossible light switches on a consul between the beds which turn all manner of things on and off but not the lights.

This is a retro North Korean hotel.

Sleep is on unforgiving beds more rigid than a farm trailer, tucked in with clean sheets and a choice of Korean style eiderdowns topped with corn filled pillow.

The days travel experience resonating in your mind create the wildest of dreams and you wake to early morning propaganda blasted out to the workers outside your palace followed by: 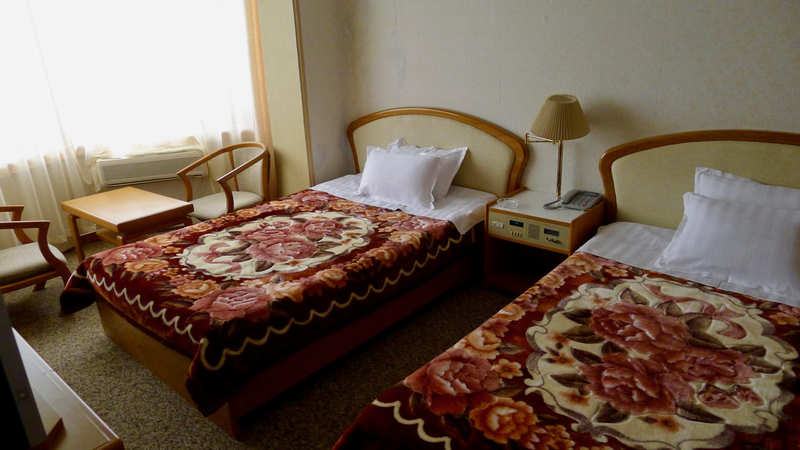 After a somewhat rude awakening, it’s then onto breakfast via the corridor of patterned hall carpets with symmetrical placed primary coloured velour chairs (that are rarely sat on as there is no reason to pause half way along a corridor).

The restaurant tables are dressed with clean but damp tablecloths and the uniformed waitresses smile and do their best, serving you pre-cooked omelet on semi-toasted toast ersatz coffee and a small dollop of butter and brown, but very tasty, jam. 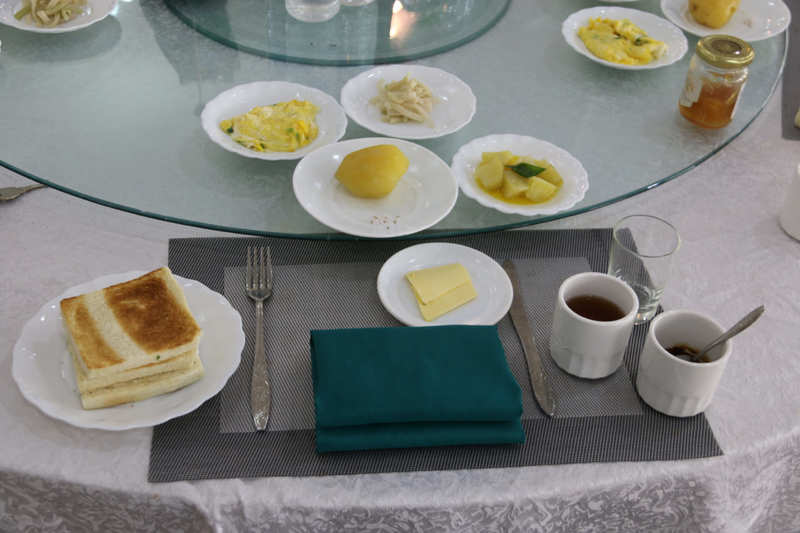 Particularly notable at the Janamasan Hotel in Kaesong - where it seems all the staff and their distant relations come out to bid you farewell.

More often than not, a departure from any North Korean hotel is held up when the bathroom towel is not found so either pay the fine or look through your bags and find to your embarrassment it has tried to defect with you.

The first North Korean hotel to receive an upgrade was the Myohyangsan Hotel in Mt. Myohyang.

This is a triangular-shaped hotel with its superbly kitsch interior.

The subsequent upgrade not only saw the demise of the beautiful wooden bead curtains and 3D wallpaper but it criminally ripped out the lobby’s bucolic ‘Bambi’ woodland fountain scene, a loss to the world, it deserved UNESCO status. 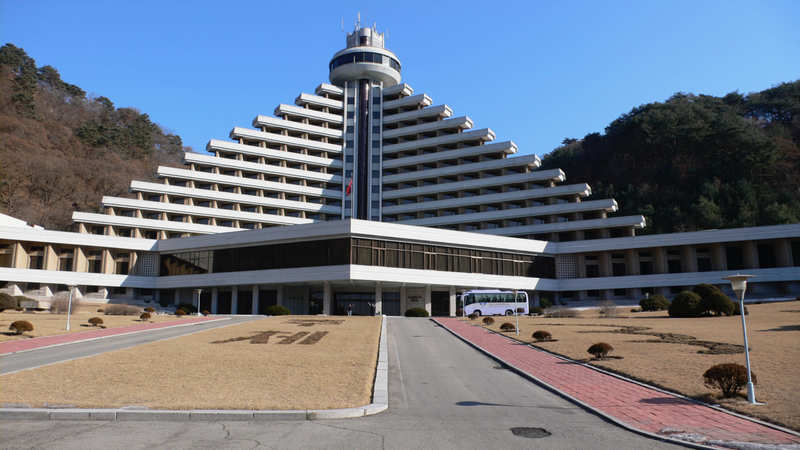 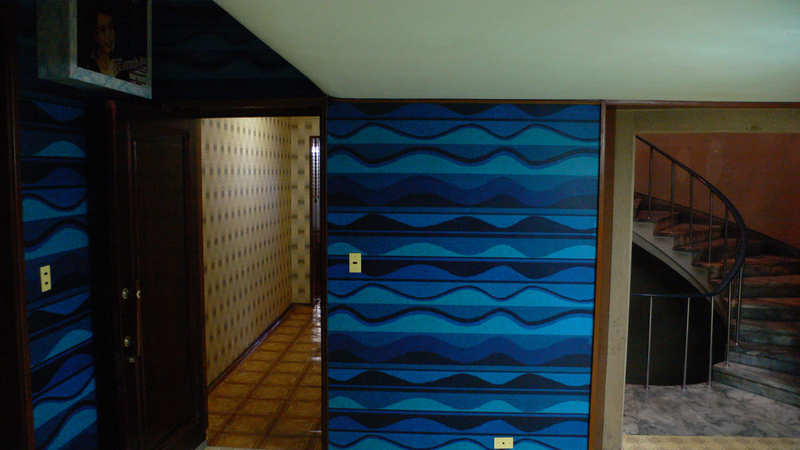 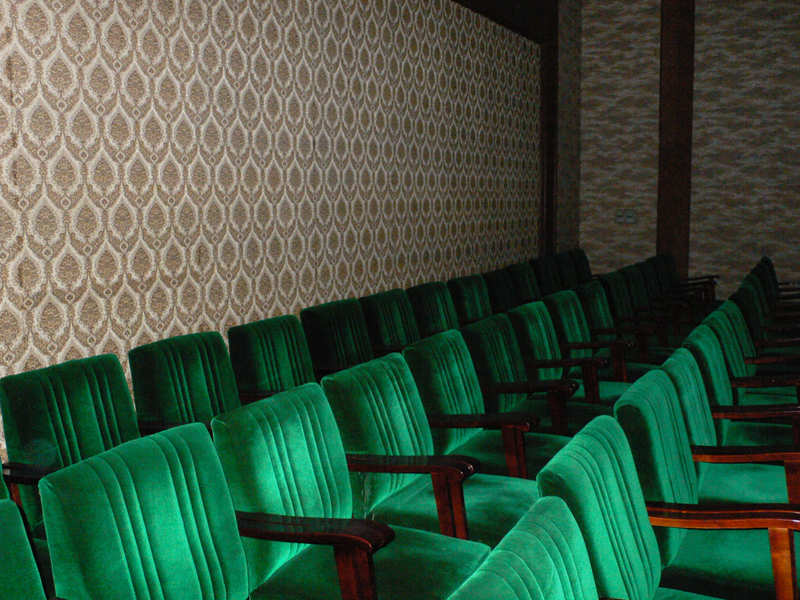 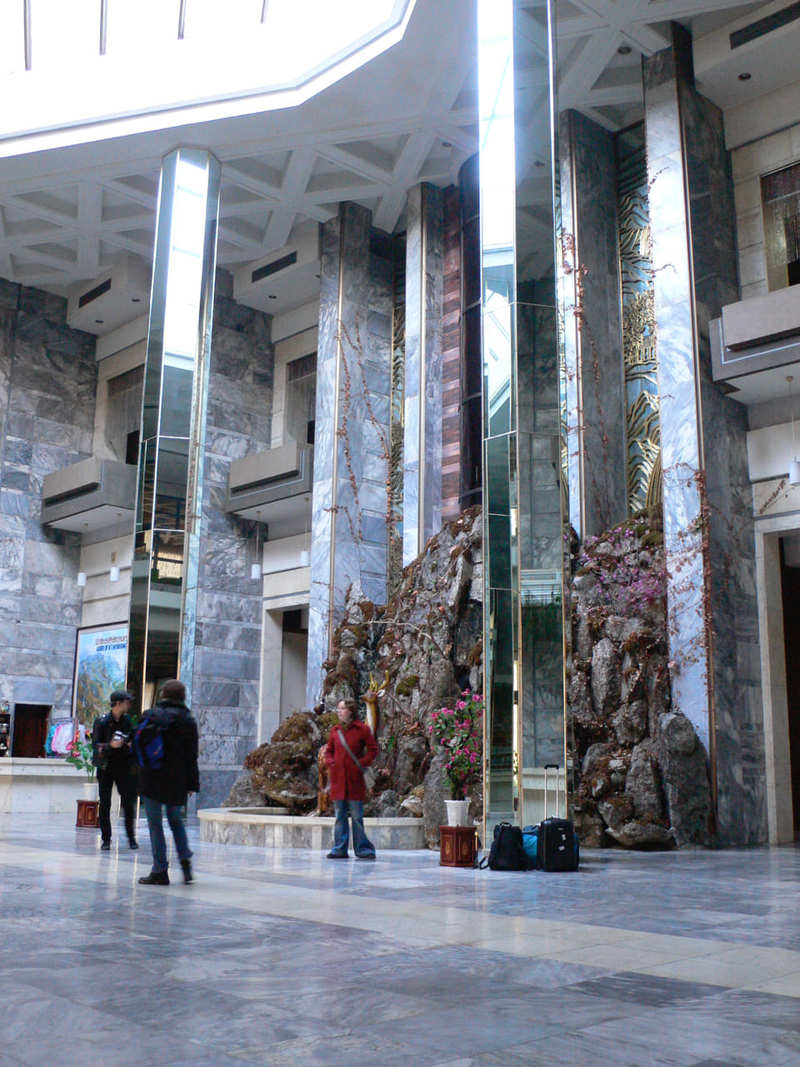 All uniqueness renovated out of the building by a designer who took inspiration from a McDonald fast-food chain.

All of this uniqueness will one day disappear and replaced with the reliability and uniformity of hotels like the Grand Hyatt.

It may have all the creature comforts, but it is not an experience you will remember.