Participating in the 7th Chinese Census

Wednesday, November 4th 2020 in Beijing, the day is dominated by waiting for the US Presidential election results and (as we all know now) this is a frustrating and complex process indeed.

After attending the US Embassy election gathering I was at home again, parked in front of CNN and having just watched Donald Trump’s provocative speech in which he seemed to claim victory despite a vast amount of votes still yet to be counted.

A knock at the door came, and when I went to see who was coming around at 4PM on a workday it was two ladies from the China Population Census office – identified by blue fleece jackets with the nifty logo of the census embroidered on them.

This logo is a stylized version of the Chinese character for people; ‘ren’ ： 人

They told me I was required to submit some information, I pointed out that the local police already know who lives in my house due to the requirement to register with them, something that can be a bit onerous but is well-established and enforced these days. Anyway they wanted my info and had me on the system, which they showed me on a mobile phone, but with my name spelt wrong.

I corrected the spelling (strangely they only wanted my surname) and then answered the other questions: year and month of birth, reason for being in China, education level, and amount of time in China. For the final question you choose from a list of options, the longest being simply ‘More than 5 years’ so I chose that. I also was able to complete this form for my wife who wasn’t home.

I asked what they were doing about all the foreigners stuck overseas, they said they were only counting people in the country at this time, so sorry to those of Koryo Tours who are COVID refugees in Europe, Mongolia, and Tonga: you don’t count this time around!

As a parting gesture they gave me a small plastic bag with the census logo on it, a gift for cooperating with the process (which is an obligation, so not really any need for an incentive!). Inside was a shopping bag with flowers on it. Not sure if there is supposed to be a context but I guess I now have a piece of census swag!

This census takes place every ten years, I was actually here for the 5th and 6th versions but was not approached by anyone to actually participate in 2000 or 2010, so I have no idea if I was included in the final totals.

So that’s how one takes part in the Seventh National Population Census of the People’s Republic of China – simple enough, 5 mins for two people (including a bit of banter with the census takers) and a free shopping bag. 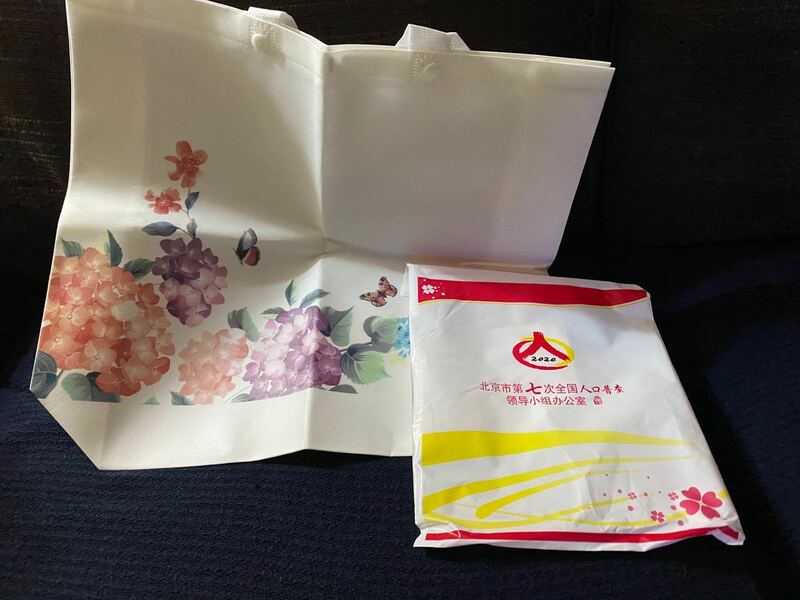