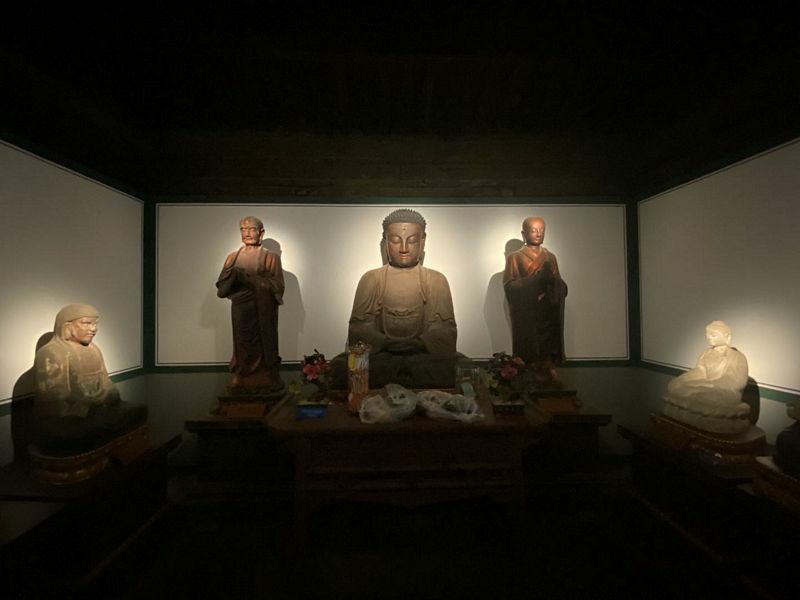 The oddly-named Beijing Museum for Cultural Heritage Exchanges is located inside the absolutely lovely Zhihua Temple, a genuine hidden gem on the Beijing museum and temple scene, and one unfairly very little visited.

Considered to be the largest extant Ming Dynasty temple in Beijing city this is tucked away in a hutong just inside the Second Ring Road on the west side of the centre, not hard to find, but easy to miss too, the Zhihua temple earns a strong recommendation from the Museums of Beijing project and is well worth an hour of any visitors time. Every day at 10AM and 3PM there is a fifteen-minute performance of ‘jing music’ played by monks, which is apparently fantastic, but of course, I was there at midday and missed the whole thing!

The museum itself is a somewhat vague concept – I never really learned what part of the exhibits in the temple were related to any kind of exchange of cultural heritage, unless it refers to exchanging the cultural heritage of Zhihua Temple with 20RMB of my money, but I’m not complaining at all. In the end this is the same as visiting a temple, and I don’t generally include them unless they actually exhibit something other than just themselves, but I will let it slide this time. 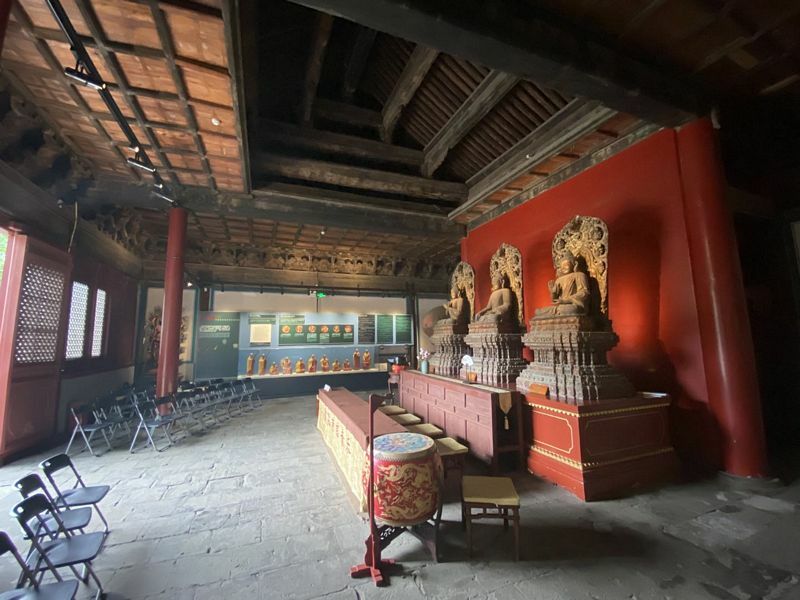 Built originally in 1444 by a powerful court eunuch Wang Zhen, this complex was luxurious and ostentatious, showing off the power and prestige of Wang. He was known to be a bit of a wrong ‘un though, and behaved in the somewhat negatively stereotypical way of eunuchs by trading influence, grafting for power and money, and manipulating a weak emperor. He even had a statue of himself installed for pilgrims to worship at, which lasted for some three centuries until an imperial censor visited during the Qing Dynasty and had it torn down in a fit of righteous indignation at this rotter from the previous regime.

Zhihua Temple fell into disrepair and photos from the 1930s show collapsing roofs and overgrown courtyards. Now it is a nicely restored and quiet complex, surrounded by modern Beijing, but retaining some peace and serenity in its general vibe. A sanctuary indeed in this buy metropolis.

Today’s Zhihua Temple is made up of four courtyards; the first has small drum and bell towers to the west and east, with only the bell tower open to visitors. The bell’s unique design is displayed on the walls but only the bottom of the bell itself can be seen through the ceiling. Then there is the Zhihua Gate which holds a video display of the temple history and a small exhibit of the same, a short but detailed introduction.

On to the main courtyard – here the east side building, ‘Great Wisdom Hall’ holds a temporary exhibit, at the time of writing this is about the renovation of the temple complex, which is nicely done. Then opposite on the west side is the best part of the temple; the ‘Hall of the Scripture Cabinet’ holding a massive and hugely impressive octagonal (one-of-a-kind they say) unit made up of drawers to contain Buddhist sutras, and topped by a superb ornate Buddha carving set beneath an inverse well rising into the ceiling. It is a beautiful piece of work and the information on the walls around add context and detail, the only downside is that it is very hard to see the top of the unit, something acknowledged by the text at the end of the exhibit which apologises for this obscurity, a nice touch. 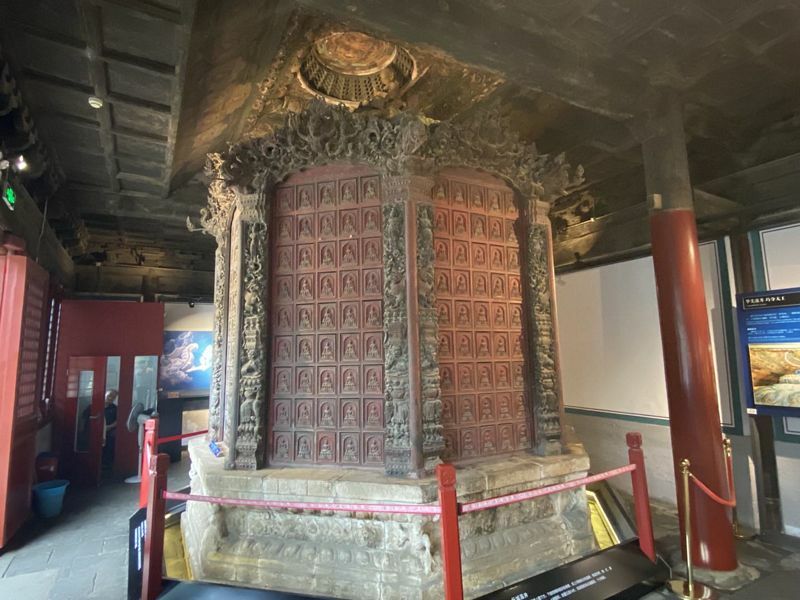 The north building here is the Zhihua Hall, where the musical performances take place. The exhibit in this hall is dedicated to jing music, and the monks who perform this devotional art form. It’s interesting and clear, although it would be nice if they played some of through speakers for those of us who carelessly miss the daily concerts. There are also large buddha statues in the middle and behind the main section of the building. The once-ornate ceiling is on display in the Philadelphia Museum of Art, having been sold some time in the past.

The third courtyard is topped with a two-story building, made up of the Tathagata Hall and Wanfo Pavilion, the pavilion is the upper floor and is not open, the hall is a beauty though, with hugely impressive statues backed by walls containing numerous drawers for sutras, like the ones on the octagonal cabinet, and niches with hundreds of tiny seated buddhas. A very finely displayed room indeed. 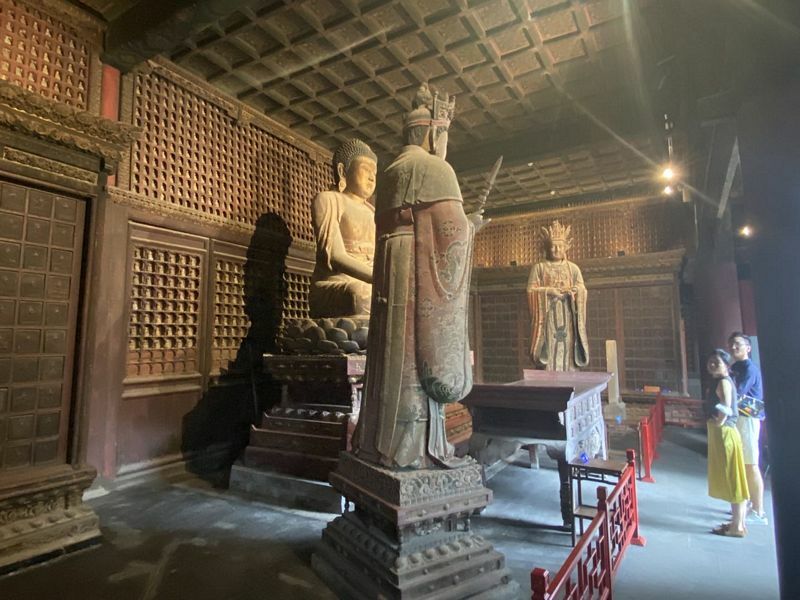 There is a last smaller courtyard, but this was off-limits at the time of my visit. The wall to the east of the Tathagata Hall is covered with detailed architectural designs of the temple though, something very interesting, even if lacking in translation – in the rest of the temple most explanations are bilingual, which is most welcome indeed.

While not really a ‘museum’ by any standards, the Zhihua Temple, and its Beijing Museum for Cultural Heritage Exchanges is well worth a visit, doesn’t take long to get around, is easy to get to, and is well priced too. Any visitors to Beijing looking for a temple to enjoy and get some nice photos in would do well to add this to their list. 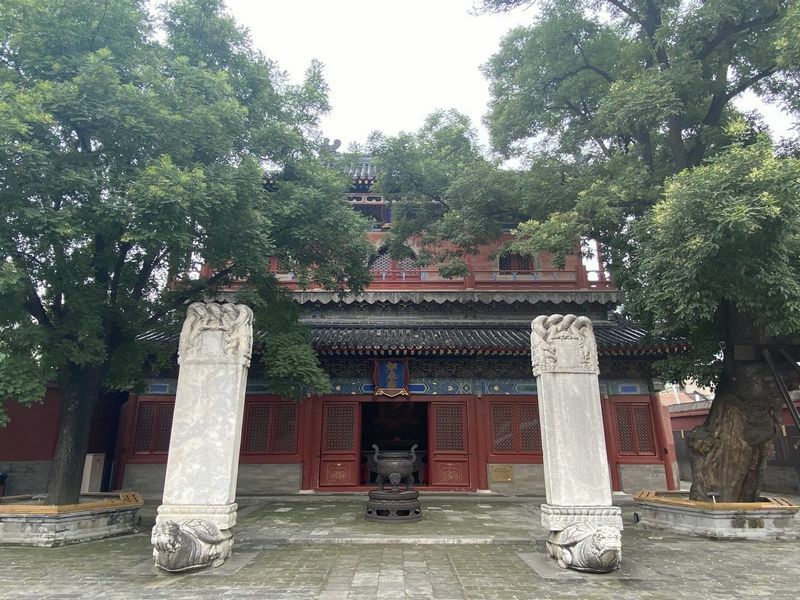