All about the final victory of the CCP

Xiangshan Museum of the Founding of New China

Cost: Free (bring passport or photo ID and register at least one day before visiting) 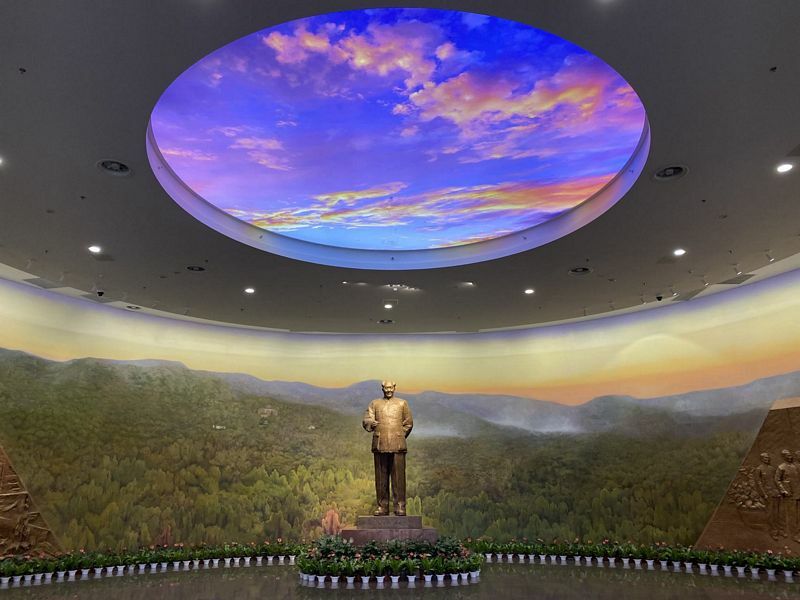 Xiangshan is the Chinese name for what is known to much of the world as Fragrant Hills, a scenic and lovely part of northwest Beijing, just outside of the Summer Palace and next to the Botanical Gardens. Famed for autumn leaves as well as the walking trails, temples, and other sites that lie in these hills. It is also where the advancing Communist forces set up a base in early 1949, as they seized control of Beijing and issued orders (from their top men, Mao Zedong and Zhu De), to commit to the conquest of the entire country.

For several months Xiangshan was the base for the red forces as various stunning victories were achieved at the end of the civil war; the crossing the Yangtze River by over a million soldiers to seize the Nationalist capital of Nanjing, the fall of Shanghai, and many more battles won by forces led by the big names of the era; Lin Biao, Peng Dehuai, and so on. All commanded by the top brass who were hanging out in the hills at this point, before descending to the city and declaring the foundation of the People’s Republic of China from Tiananmen Gate on Oct 1st, 1949.

This impressive museum was opened in 2019, and is very modern and well-equipped, even if the narrative is told in a slightly old-fashioned way (by which I mean, very dogmatically, with almost no room for anything not hagiographic about the figures and movement being described and honoured here). 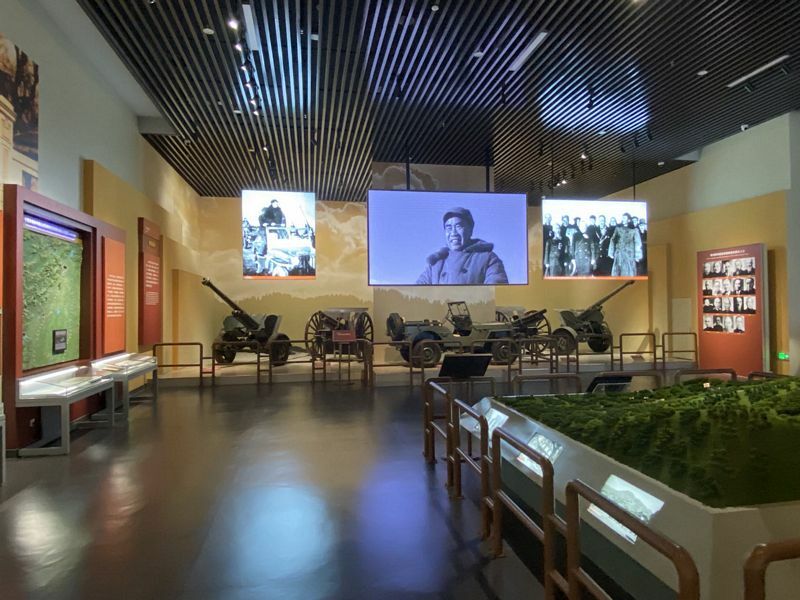 This museum occupies the site of the buildings used as the HQ of the Central Committee of the Communist Party of China from March to September 1949 (after that, they moved to Zhongnanhai in central Beijing), but has been completely rebuilt, so there are no Yan’an style visits to Mao’s former office or anything like that here, instead, we get a series of several well-designed halls walking us through a few crucial years in Party and national history.

Once inside the first stop is an entrance hall with a Mao Statue flanked by bronze (coloured, not real bronze, this isn’t North Korea even if the aesthetics of this room do bring it to mind) reliefs of key scenes he directed from this site. Then we head straight into the action. It is worth noting that I was very pleasantly surprised to find all captions in both Chinese and excellent English. Many of the ‘red’ museums I have visited, even the newly built or renovated ones, have decided to forgo English these days, maybe figuring that foreigners might not really be that interested in the subject, anyway here at the Xiangshan Museum of the Founding of New China there is no such concern, and this made it a much better experience for me.

There are Five ‘Parts’ to the Museum on the main (second) floor. But each is subdivided up further, as it is a rather dense story to tell. We start with ‘Going to Beijing to take ‘The Test’’ which refers to a challenge set by Mao to his forces. We move through ‘Moving into Xiangshan’, ‘Commanding the War to Liberate the Whole of China’, ‘Preparing for the Founding of New China’, and finally Part V: ‘Remaining True to our Original Aspiration Firmly Keeping in Mind our Mission and Never Ceasing the Great Struggle’ which is by far the weakest part of the museum as it is just a larger version of a room found in many Beijing museums these days where the five paramount leaders of China are profiled and their words of wisdom related in some way to the museum topic are highlighted. This isn’t irrelevant here, it just isn’t as interesting as the previous parts, all of which are fascinating. I say fascinating, but I mean fascinating to me. This is one of those places that s not for everyone, and if you don’t know your Ren Bishi from your Peng Zhen then you might find this all a bit dense and warlike too. If you are into Chinese 20th-century history, familiar with some of the major movements and so on, then it is a bit of a joy and very highly recommended. As usual, a few events are skipped, but this is no surprise in such a place, and I found it all quite educational.

The exhibits are mostly made up of large photos of various events and personages, then some maps and paintings, some collections of weapons, artefacts used in those years, and some waxworks and statues – one of Mao reading about the liberation of Nanjing in a newspaper, taken from a famous photo, is a good one in particular.

There are also some artefacts that the staff here (who, at the time I was visiting, were the only other people in the museum. More visitors were arriving as I left though) claimed were all legitimate. So the keys to the ancient city gates of Beijing, some of Mao’s phones and ashtrays, the first boat to cross the Yangtze River (no way this one is the original), plus the very flag raised over Tiananmen Square on Oct 1st 1949 (which regular readers will know was hoisted up a flagpole made from water pipes, a fact I learned at the Tap Water Museum/Waterworks Museum).

Of course, there is probably a point where you can see too many photos of Mao Zedong, Zhu De, Zhou Enlai, Liu Shaoqi, and so on. But I spent an hour in the Xiangshan Museum of the Founding of New China and that was just about right. I spent time in the bookshop and gift shop at the end but wasn’t inspired by any of the books about these chaps (most books available were by or about Xi Jinping in fact, I also opted out of those). I did find myself a nice wooden 20cm ruler with a picture of the first boat to advance across the Yangtze on it, for a very reasonable 12 RMB though.

There is a nice coffee shop at the end of the museum, in amongst tall shelves of books that you can sit and flick through, a nice addition to a fine museum, which is well worth the trek out to the Fragrant Hills as well as the slightly painful online booking process (use the WeChat miniapp, or the website of the museum). I had to book with a name in Chinese for some reason, but this was no barrier to simply typing in my passport number on the ticket machine on site and having the ticket I booked spat out promptly).

This is a better and more welcoming museum than the similarly new Museum of the Communist Party of China, as well as being in a nicer part of town. So for anyone with an interest in Chinese revolutionary history, or who wants to see another thousand photos of Chairman Mao, I can heartily recommend the Xiangshan Museum of the Founding of New China as a good place to add to your list!

Bonus fact for fans of numerology – the 28 pillars at the south entrance symbolise the 28 years that the Communist Party of China existed between its founding in 1921 and its assumption of control over China in 1949. 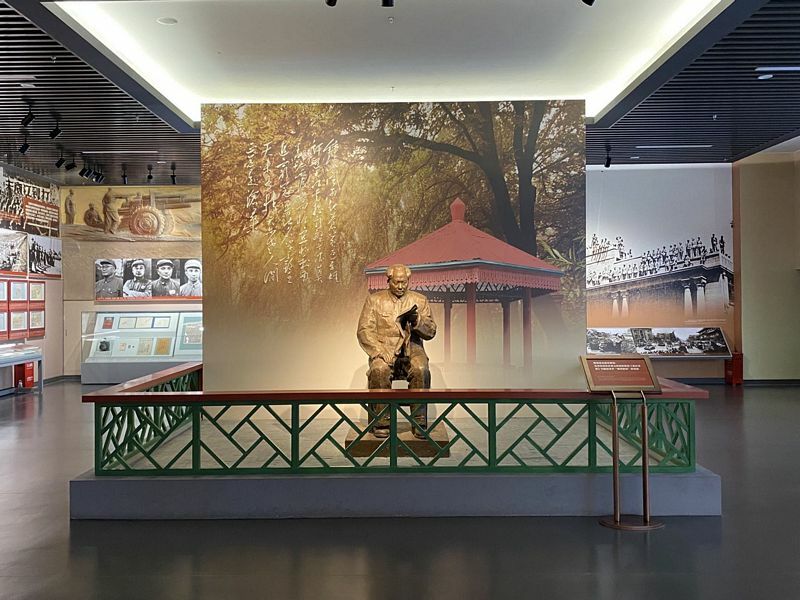