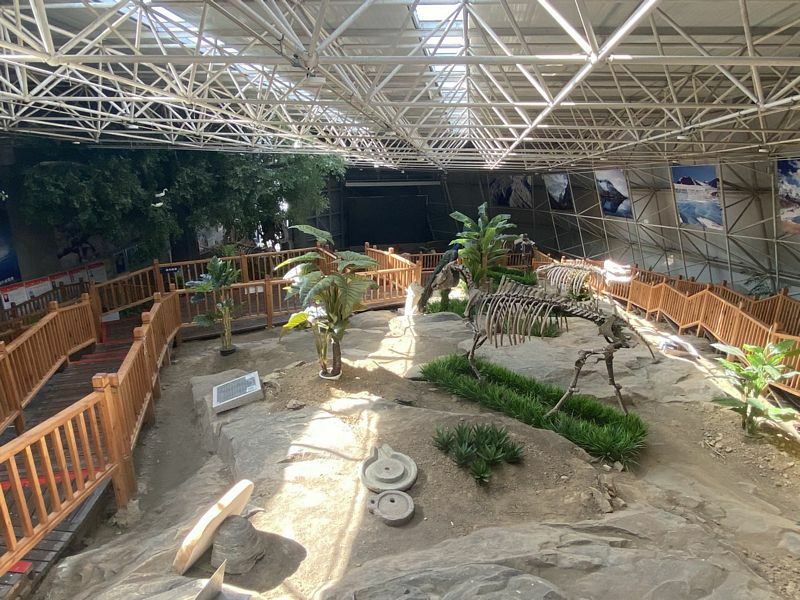 Beijing Quaternary Glacial Vestige Exhibition Hall (seriously, a better name couldn’t have been thought up? Glacier Museum?) is in an absolutely lovely location, at the edge of the urban city on the west side, near to the 2022 Winter Olympics site in Shijingshan, and abutting the mountains in which site temples and pathways, even the towering residential buildings here are quite pretty, backed with hills that are absent in much of the rest of Beijing, a very flat city. A trip out to this area and through the village-like hutong area to get to the museum is worth the journey itself.

The Museum is a quirky one for sure, and is mainly an educational institution, as with many of the other science museums in Beijing, but it is small and manageable and a visit here will take most people less than an hour. 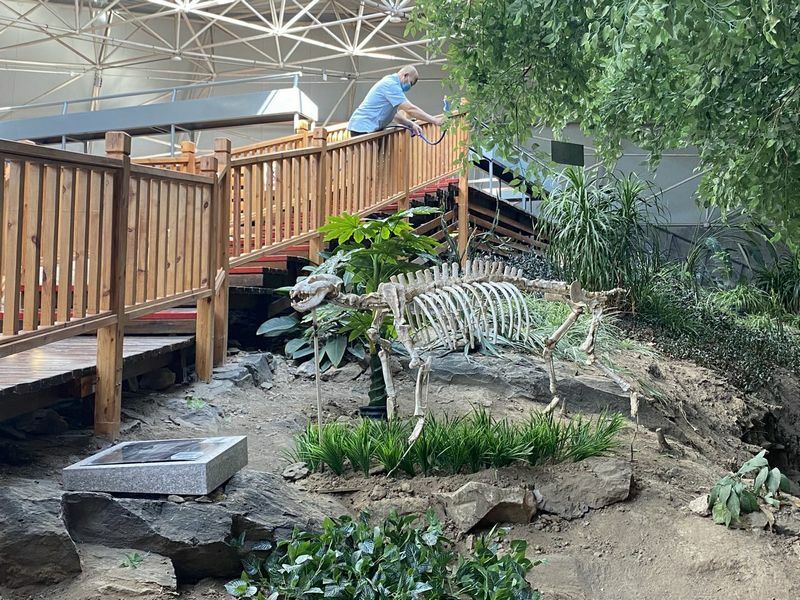 Opened in 1989 and probably not developed much since then (it is somewhat retro inside, not necessarily a negative thing) the main personality this museum is built around is Li Siguang, the father of Chinese geology, a large bust of him, a series of panels explaining his life story, and a statue of him looking at a rock can all be found here.

First let’s examine the name of the museum. I had no idea what ‘Quaternary’ actually meant until today, it’s (for those who also have lived so far in ignorance) the name of a period of time roughly from 2.5 million years ago up until just under twelve thousand years ago, so that’s yesterday in geological time. This is when all the recent glacier movements happened and shaped the earth as we know it today. This is all explained at the museum….I believe. The problem is that I couldn’t really understand most of the explanations on offer and got tired of running all the boards through a translator in the end as it was all a bit too scientific for me. Anyway, it looks like it contains a lot of relevant info, so I will just assume that it does! 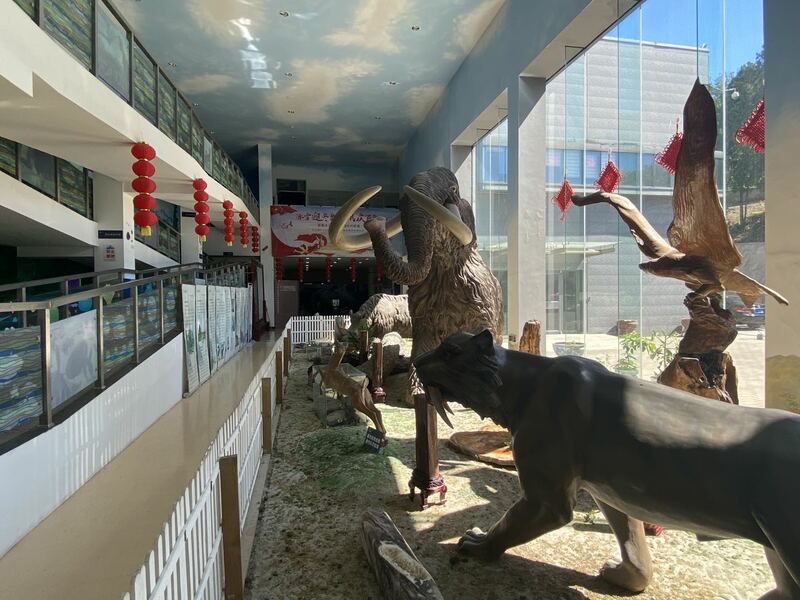 While actually learning anything might be off the table for most foreign visitors, there is still much to see at the Beijing Quaternary Glacial Vestige Exhibition Hall; there are some skeletons of megafauna that have gone extinct in the Quaternary period (mammoth, sabre-toothed tiger, prehistoric horse) some fun dioramas of animals and general glacial themes. There are some models and banners and so on, it’s diverting if not especially fascinating (to be honest though if I visited here when I was a child, and was able to read the Chinese at that time, I would have absolutely loved this place). There are some cool rocks and crystals, and there are some videos (or rather lots of the same video in various halls) to get a quick blast of information too.

As for the various halls, this actually came as a surprise. At first it seemed as if the museum was just one main hall; set on an artificial hillside dotted with skeletons of animals plus some stuffed peacocks (which may be some local motif, in the housing estate I walked through to get here from the subway there was also a large model of a peacock to be found beside the road), as well as some general info on the beats on show, plus security guards watering the real plants that are planted here, giving the hall a bit of a greenhouse vibe). Then down corridors and stairwells more and more rooms present themselves. It became clear to me that I was doing all this in the wrong order, especially when I came across a ‘Creation of the Earth’ display just before leaving, but I think it doesn’t matter for the average visitor too much. 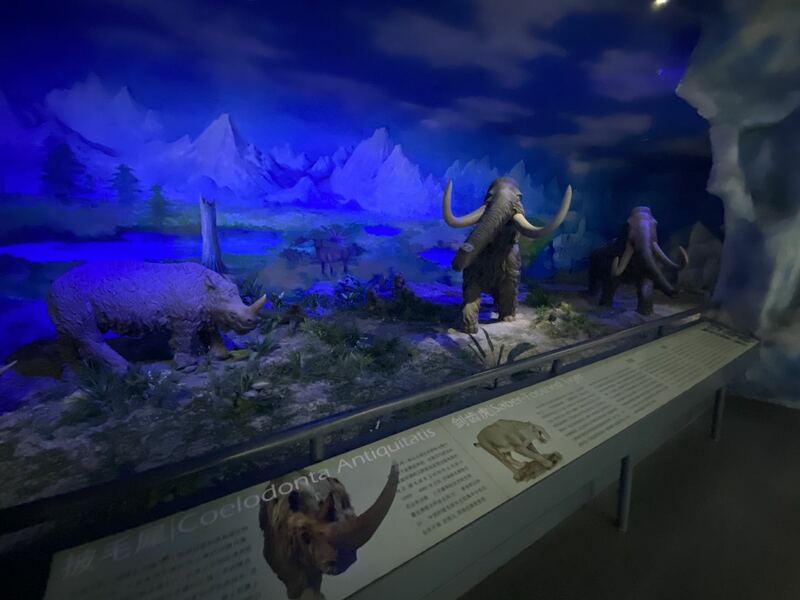 The staff were friendly, maybe a little surprised to see a lone foreigner at eight thirty in the morning, but welcoming enough and told me that they expect more foreign friends to visit during the Winter Olympics (I guess glaciation and winter are linked somehow, right?) and one of them had a rather nifty tote bag with a cartoon mammoth on it, one of the museum’s mascots. Unfortunately the shop on site didn’t sell these and instead was mostly flogging jade bracelets and various other rock-stuff - not even a magnet? They should try harder.

While not top of the list for a recommendation in and of itself the Beijing Quaternary Glacial Vestige Exhibition Hall (typed again for SEO purposes, I shall not be typing these words again!) is worth a visit for anyone looking to get to the edge of town, do something a bit unusual, and it combines very well with the nearby Fahai Temple and Tian Yi Tomb (the former Eunuch Museum). I literally visited all three of these, on foot (apart from the subway ride to get there) and was done and sitting in a very nice coffee shop right next to the Tian Yi Tomb long before midday. 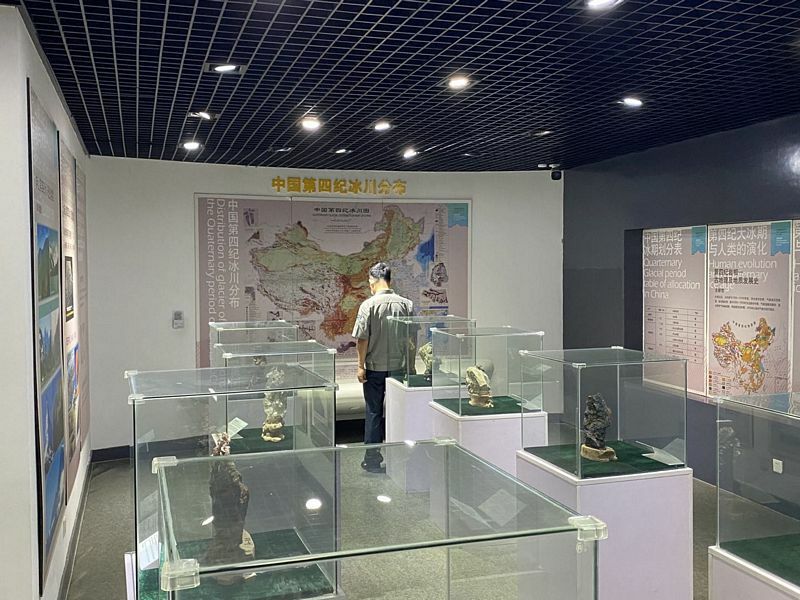