One of Pyongyang’s most unique and unusual buildings has a fascinating origin story. The rise of a teenaged widow to wealthy benefactor of the Korean community under Japanese occupation.

A solid three-storey, granite stone block built ‘house’ has a floor space of 1,770 square metres. It was actually designed as a community centre and not a house for living in specifically. The upper two floors make up an auditorium with stage and balcony. Construction started in 1927 and the building opened in May 1929.

The building is named after its benefactor Paek Son Haeng (born November 1848, died in 1933), a Korean businesswoman and philanthropist.

Under Japanese occupation, the only community centre in Pyongyang was for the Japanese, and she decided to build a better one for locals funding the full cost of the project.

The fact that it is one of the few buildings constructed under the Japanese occupation and in their colonial neo-renaissance/European style is testament to the importance placed on this great woman by Koreans in both North and South.

The local story is that this is one of only a handful building that survived the Korean War (1950-53), the others being what is now The Party Founding Museum, part of the Moranbong Theatre, the nearby Taedong Gate (supposedly used for orientation by the bombers and thus largely spared), as well as a now-demolished building on the site of the No1 Department Store.

One corner of this house received bomb damage, but this was repaired and it was put back into use. Born either in Pyongyang or Suwon (northern and southern sources vary) she was from an impoverished background and was tragically widowed at a young age, but with her business savvy and living a frugal life she became one of Korea’s most famous philanthropists.

The Korean guide at the Paek Son Haeng Memorial Hall will relate the story of her gaining her fortune and at the same time cheating the occupying forces:

“She was born into a poor family in the period of the feudal Ri Dynasty. And her full name is yet unknown except that she was only called “Widow Paek” (this was a name given to her by the people as it signifies virtue). When she was seven years old, her father died. She was married at 14, but less than two years later her husband died leaving her widowed and childless.  and she did not remarry. She worked very hard, selling bean sprouts and bean curd, gathering swill and doing every other possible thing to make her living. She was tricked into buying a stony mountain in what was then Sungho-ri, Pyongan Province, but this changed her fortune. The stones turned out to be limestone which was ideal both for agriculture and industrial use.

A Japanese capitalist asked her to sell the mountain to him, and she was clever enough to resell the mountain for at a vast profit. She became one of the richest persons in the province and chose to spend her money for the good of people”

Amongst various projects, she provided funds for the Paekson Bridge across the Taedong River which bore her name. The bridge has since been demolished/destroyed in the Korean War.

The story goes that villagers were so grateful they gave the name of Sonhaeng (good works) and hence she was known as Paek Son Haeng instead of Widow Paek.
Coming from such a poor background (she was illiterate) made her aware of the value of education and she provided funds for Kwangson and Changdok school and various other educational establishments in the area.

She became a social activist for educational development and her advice to students was:

She is mentioned in Kim Il Sung's autobiography ‘With the Century’ as someone respected by the people as "a great war hero" due to her success in making money under the Japanese regime to the benefit or her countrymen.

In July 2006, her memorial stone was rediscovered and restored in Pyongyang. 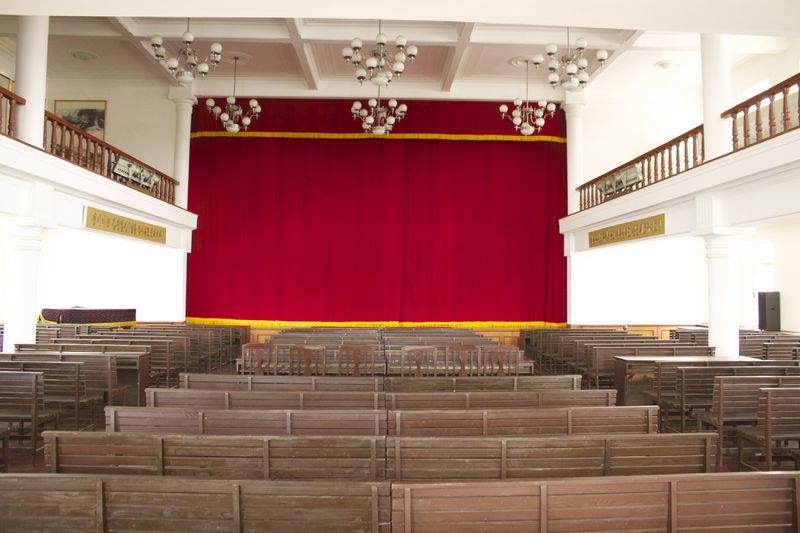 In the 90s the building was occupied by Korfilm, the Korean Film Company.

I remember the ground floor office well, it was where we had all the preliminary meetings and contract signings for the three documentaries I made with Daniel Gordon (The Game of Their Lives, A State of Mind, Crossing the Line). It was also the building where I was introduced to the US defector Joe Dresnok for the first time, and the building appears in Crossing the Line as the scene of our introduction to Charles Jenkins, another American defector.

The building also has a more recently added small 30 seat screening cinema. It was here that I was shown, to my amazement, the footage of the North Korean 1966 football team’s reception on their return from the World Cup in England. It has been reported that they returned in disgrace, but the footage of the celebratory crowds does something to refute this.

The building was renovated and in 2010 opened as a museum dedicated to the memory of the formidable Mrs. Paek. In the walled compound, a bronze bust of Widow Paek has been installed.

The Memorial Hall also functions as a teaching resource for children’s study with access to the small library that was part of the original construction. For anyone wanting to visit the Paek Son Haeng Memorial Hall more information can be found here.