This fairy-tale story of these giant killers was shrouded in mystery. They had come to England as 1000:1 outsiders, won the hearts of the nation, but no one knew what had happened to the players on their return to North Korea – if they were held in high regard or not.

THE GAME OF THEIR LIVES

Dan Gordon contacted me in Beijing via email in 1997 with the idea of making a film on the North Korean football players of 1966 who had created the greatest shock in World Cup history by beating the favourites the Italians 1-0 in Group 4, the first set of knock out matches played in England.

Dan had first heard about the 1966 North Korea team when he was around 8 years old, ‘My father gave me a copy of 'GOAL!' the official film of the World Cup 1966. I found the Korean story fascinating, even though it was England that won the tournament. As I grew older, I heard more personal stories and wanted to find out what exactly happened to these 'far-away heroes'.

However, the fairy-tale story of these giant killers was shrouded in mystery. They had come to England as 1000:1 outsiders, won the hearts of the nation, but no one knew what had happened to the players on their return to North Korea – if they were held in high regard or not, all was still shrouded in mystery. In the west, the story was that they were arrested on their return to Korea and sent to prison camps. After the Italian victory, they travelled to Liverpool for the quarter-finals against Portugal. They were 3-0 up but squandered their lead to lose 3-5. The Koreans returned to North Korea but were never heard of again. 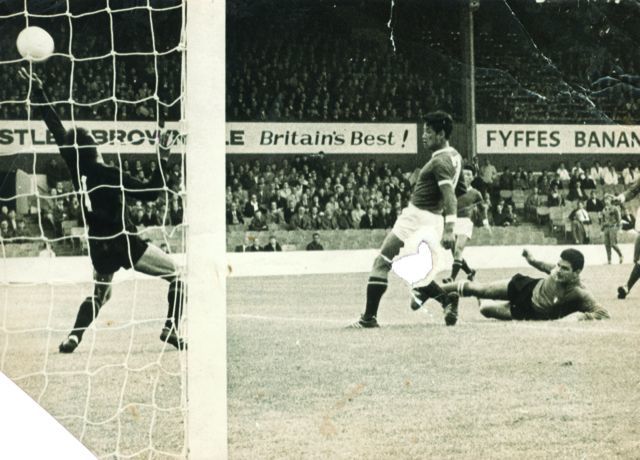 The conspiracy theories in the west blossomed, the main story put the blame on a drunken party they had the night of the match against Portugal which affected their performance lost them the match. On return, they were sent to prison camps for having brought shame on the country. Only Pak Do Ik, who does not drink, remained free.

This made any idea of finding out what happened to the team even more awkward, even asking about the whereabouts of the players, if indeed they were alive, might mean problems for ourselves and any Koreans we were involved with.

I met Dan in a coffee shop in Putney, London in 1998 (it turns out we went to the same school albeit 13 years apart!) and my initial response was that this would not be possible- journalists had tried beforehand to interview the players but to no avail. Journalists are not allowed into DPRK unless invited (very few get invited!) and as for a documentary film crew interviewing not only the players but also the day to day life of Pyongyang would be next to impossible.

However, on return to Beijing, I met up with our North Korean friend Kim, whom my colleague Josh had known since studying the Chinese language in Beijing and who also loved football. He liked the idea and knew that at least one of the players Pak Do Ik who scored the goal against the Italians was still alive and apparently well known in-country. Kim approached the relevant authorities for permission for us to interview him and a tacit agreement was reached- we would get access! 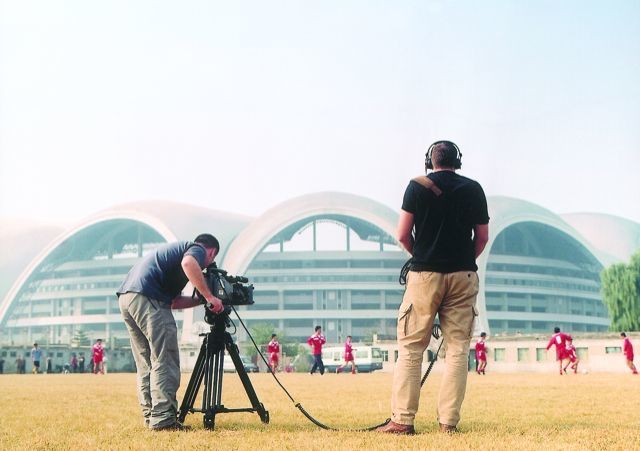 We spent the next few months negotiating red tape and all was looking positive when Dan called and told me he had lost the funding. The broadcaster he had found thought we would not get access and they would simply lose any funding to the Koreans, so they pulled the plug on the project. This was very awkward, in North Korea, there is one thing you do not do, and that is start something and not finish.

After three years of work, we were at a dead end.

I headed back to Sheffield and Dan and I met up with friends and family to cajoled them into sponsoring us for the funds to at least get to Korea with a crew, and interview the players, it would not be enough to complete the film but it would be a start. We managed to raise enough to pay basic rates for a crew, and I contacted Kim to re-start negotiations.  Two weeks before we departed, a fax came trundling through the machine in my Beijing office- we had access!

At first, we thought just to one player, but the fax kept printing, a list of seven Korean names from Pak Do Ik and ending with the goalkeeper Ri Chan Myong. 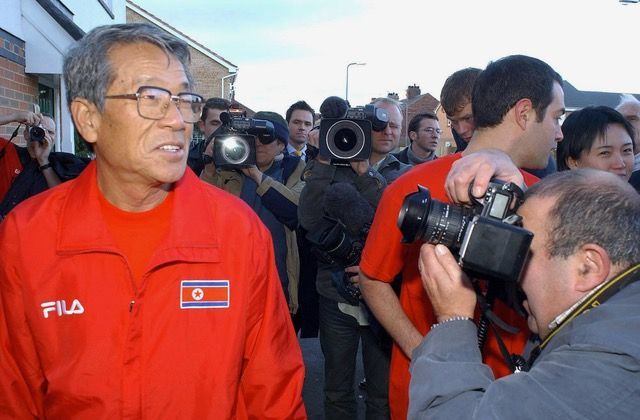 In 2001 Dan came on a Koryo Tours trip to familiarize himself with the country. Everything was set for the biggest adventure of our lives.

On October 20th, 2001 access was granted and we stepped on the plane to Pyongyang, myself Dan, our cameramen Nick Bennett, and one sound man.. When the Korean authorities realised it was only the football story we were after and not a political piece then they very much came over to ‘our side’ and everything we asked for was given- (albeit rather more polished – for example the football teams we filmed were put in their best kit etc).

We only had a vague idea of what the players would be like today, we only knew of them from the limited amount of footage from 1966 - would they live up to expectations? We had seen the 1966 matches over 40 times before meeting them in Pyongyang and we recognized them instantly- but the best was that they were just absolutely wonderful characters and this very much comes across on the film. 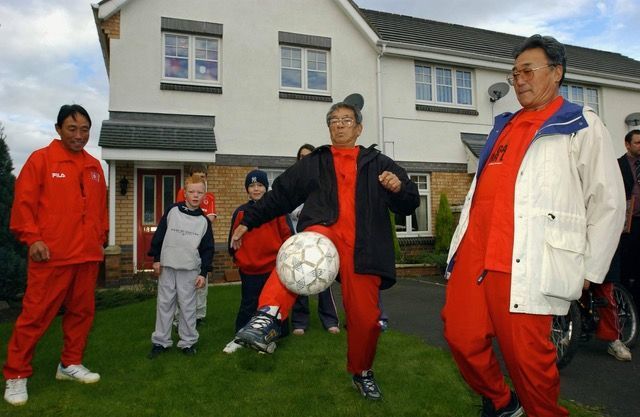 The players were not relaxed at first but once they met Dan and realised he was football mad, that we both played the game ourselves, that the film crew were specialists in sports filming, then they really relaxed and chatted at length. If you interviewed football players of today you would get the monosyllabic and cliché-laden “yeah it was a good game of two halves” but we were getting poetry! “we saw light out of the darkness” and wonderful anecdotes! We met their families and friends and achieved access beyond what we had previously dreamed of.

Probably the biggest thrill was for us to be waved off at Pyongyang station by the players, the words of Han Bong Jin ringing in their ears: "You are the first British people I have spoken to for 35 years. You are our heroes now and I am proud that you have come to my country to tell our story."

On returning to the UK with the film Dan was introduced to John Battsek (Oscar-winning producer) and he became our executive producer and managed to get the BBC on board for their new channel BBC4 who provided the funds for the post-production.

The BBC loved it as a pure sports story but also one about humanity (humour, friends, conflict, history). We wanted to do justice to a complex story that needed to be told, John also introduced us to editor Justine Wright, (2000 Academy Award winner, best documentary, One Day in September) and with her working flat out with Dan, the film took shape.

The film premiered at The Sheffield documentary film festival and was broadcast in the UK. A few months later we returned to Pyongyang to show it to the team. Over a lunchtime picnic Rim Jung Sun asked ”It still remains a riddle to me, the people of Middlesbrough supported us all the way through. I still don’t know the reason why?” As the picnic continued and the soju flowed Dan and I decided that we would take the team back to Middlesbrough. 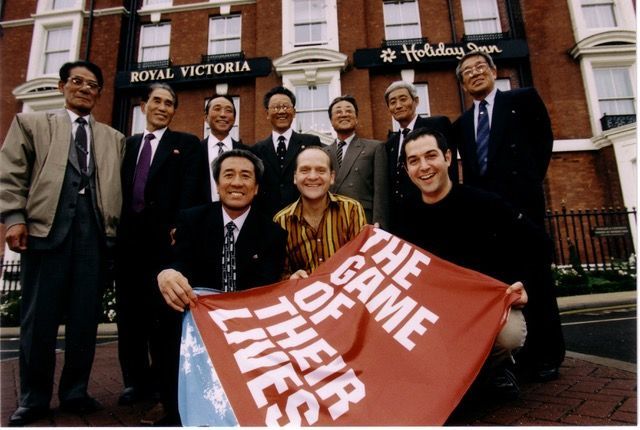 The British Foreign Office initially refused the visa request, however, with the support of Charge D’Affaire Jim Hoare the at the British Embassy in Pyongyang they were finally approved. With friends and contacts helping cover costs and Virgin Airlines covering the flights we finally flew on 15th October 2013 to London. The players were kept busy, the Foreign Office held a reception, they were invited to the Houses of Parliament by the Speaker of the House of Lords, invited onto the pitch at Everton to a delighted crowd, all in all over 120,000 people saw the players at various events.

The 1966 matches in England created a bridge connecting common ground between North Korea and the outside world, but the true highlight was held in the town from where they created the greatest shock in World Cup history. On their return to Middlesbrough, the streets were decked with banners celebrating their victory, even the DPRK flag flew on the town hall, but best of all, they walked onto the pitch at half time, 20,000 fans gave them a standing ovation.  The fairy-tale ending to their remarkable journey was complete. 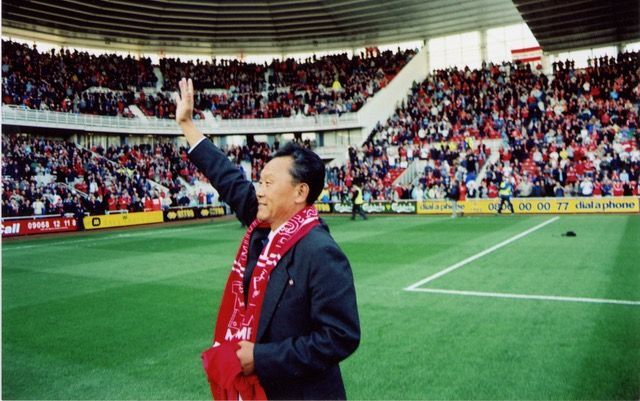 A trailer for The Game of Their Lives can be seen online here.

Tifo Football made this amazing animation telling the story of the North Korean Football team of 1966 - check that out here - How North Korea and Middlesbrough Became Unlikely Football Friends. 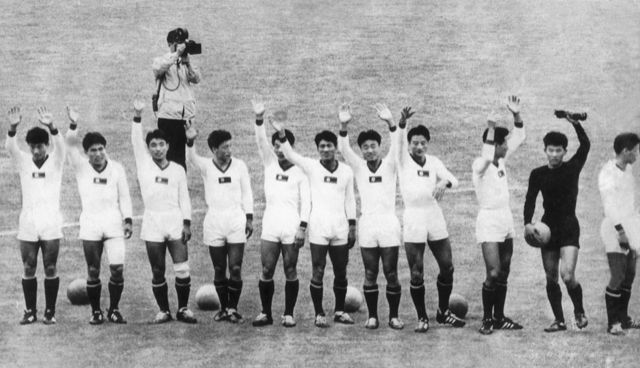