The Russian father Christmas was once a snow demon, a symbol of giving for the church and even a source of propaganda for the communist party.

A Russian fairy tale and the rehabilitation Santa

Reading this, you may be through your third box of mince pies, tucking into those turkey leftovers, trying to unblock that scrunched up piece of wrapping paper from the vacuum cleaner or just discovering that you've one more goodie in the bottom of your stocking. But have you ever wondered what happened to Santa Claus during the period of the Soviet Union?

The Soviet Union spread over thousands of kilometres, encompassing many faiths and cultures, but at its heart, Soviet Russia was once a country that celebrated Christmas just as much as its European neighbours.

Then came the fall of Imperial Russia and the Orthodox Christian order with the October Revolution in 1917 and, eventually, the rise of Joseph Stalin to the General Secretariat. Stalin wasn't all that much into St Nick and his reindeer.

In the west, we have Santa with his long white hemmed red flowing coat, long snowy whispery beard, and his giant sack brimming with presents pulled across the night sky by eight reindeer.

Whilst the Russian Father Christmas, of course, is a little tougher, his origins are entwined in Slavic mythology, and he goes by the name Ded Moroz (Grandfather Frost). He's icy to the touch and capped in long blue robes, in contrast to his western counterpart.

The origin story of Grandfather Frost would make for a great Christopher Nolan-esque dark Santa story.

Morozko, as he was formerly known, was considered a Snow Demon; he would kidnap children from their families and, instead of leaving gifts, would demand that he receive gifts in exchange for the safe return. Ded Moroz also had the ability to control water from which he would forge chains as strong as iron. Using his wizardly powers, some say that Grandfather Frost could wipe out entire armies.

The Russian Orthodox religion grew and evolved from the 10th century onwards; initially, the pre-Christian Ded Moroz was seen as an enemy; however, come the 18th century and the icy legend was to see a reinvention and step forwards a changed character.

Ded Moroz would stop his kidnapping of kids and instead provide them with yearly gifts using magic to deliver the presents across Russia; he would ride a sledge pulled, not by eight reindeer, but three snow-white horses 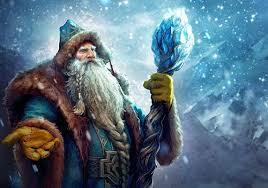 Santa and the Bolsheviks

Santa (aka Ded Moroz) may well have become set into the routine of delivering presents across Russia and neighbouring countries. Still, it wasn't to last as in 1917, the Bolsheviks, led by Lenin, came to power. As a ban on all religious holidays was enforced, Christmas was to be outlawed, and Ded Moroz as its figurehead would become an enemy of the state!

It was claimed that Grandfather Frost had been "unmasked as an ally of the priest and the Kulak (rich peasants)."

Following the communist purge on Christmas, a propaganda campaign focused on Ded Moroz and Christmas; even Christmas trees were outlawed.

The ban on Ded Moroz wasn't to last, and he was eventually allowed in from the cold, rehabilitated a lot earlier and before many of the everyday Russians whose lives would be lost in the many purges. Much like Korolov, father of the Soviet Union's rocket program, Stalin needed Ded as he sought to boost his popularity, and what better way than to bring back the father of Christmas, without the Christmas!

It was decreed that the 31st of December (New Years' Eve) would be the date that the giver of gifts would do his rounds. Calling house to house, leaving presents as he went, Ded Moroz would be filled with a new communist zeal. On many occasions, whilst overseeing gift-giving events with children, Moroz would chant "to who do we owe all good things in a socialist society?" to which the children would shout "Stalin!"

Throughout his time as a communist, Ded Moroz was an active revolutionary; unlike his western counterpart, he wouldn't spend the year lazing in the North pole but would promote good communist causes. Throughout the 1960's grandfathers, frost was often pictured, extolling the benefits of space travel and the Soviet Union's dominance in the skies above. 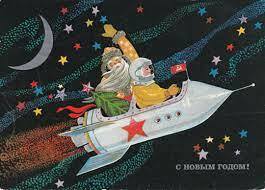 By the end of the eighties, the Soviet Union had gone, as had Russian control on many of those countries around them.

For some, Grandfather Frost had gone too far, and he was ditched in Favour of the plumper, redder, more capitalist Santa Claus.

Russia did open up, and with it, Santa Claus came supported by Coca-Cola, but Ded Moroz had one more trick up his sleeve! Grandfather Frost signed for Pepsi and promoted nationalism. He opened his home to seasonal winter tourists and was even championed by Vladimir Putin and various other Russian politicians. Moroz even renewed those old bonds with the Russian church, and kids across Russia today still await the Russian St Nick.

When is Russian Christmas?

The Russian Orthodox Church follows the Julian (old calendar dating from Julius Ceaser) while the West and Russia follow the Gregorian calendar. The birth of Christ (Christmas) is celebrated in Russia on 7th January, which, according to the Julian calendar, is 25th December. 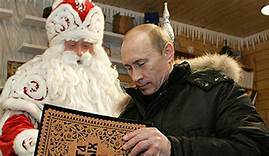 1. Unlike Father Christmas, Ded Moroz doesn't land his sleigh on rooftops but delivers his presents through the front door.

2. Like his western competition, Ded Moroz will not visit the homes of children who are still awake or those who have misbehaved throughout the year.

3. Children in Russia will also leave out goodies such as milk and cookies for grandfather Frost to feast on during his rounds.

4. In St Petersburg in 2021, lawyer Igor Mirzoev filed a lawsuit against Father Frost, demanding that he be given gifts for the past 23 years and paid 10 million rubles ($135,800) in damages. On 24th December 2021, President Vladimir Putin weighed in on the case stating that he himself would defend Grandfather Frost as Frost only grants wishes and gives gifts to good girls and boys. 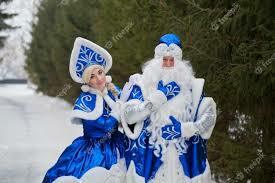