Infiltrating the US Embassy in Beijing!

Ok, so the title of this blog is a bit of an overstatement! I didn’t ‘infiltrate’ the US Embassy at all, I was invited in to attend an election day event, but that would be a much more boring title!

November 4th 2020, technically the day after the election but here in Beijing the morning of the 4th is the afternoon/evening of the 3rd in the United States, so the event at the US Embassy, which took place from 8AM – 1PM included times when polls were closing, early results and projections were coming in. I went along from about 10AM until midday, having watched the unfurling of the events at home up until then. No dress code was specified but in turning up in what I thought was a fairly formal dark jeans, shirt, suit jacket I was by far the most casually-dressed person there, I did deliberately avoid any political colours and went with a purple scarf: Red + Blue = Purple. That was my thinking anyway!

After presenting a passport and invitation at the entrance I went through the body scanner and had to drop off my phone and bike keys to be left at security (hence the lack of photos from the event!) and then went around a series of covered walkways between the main buildings of this massive embassy to the indoor basketball court (half court anyway), a somewhat cavernous high-ceilinged place full of well-dressed diplomatic types from the US and their guests. Outside there was a table of snacks, (sandwiches, Macanese egg tarts, nachos) plus tea and coffee (no booze, a disappointment but probably for the best), as well as a row of large posters with the portraits of Presidents Kennedy thru Obama, No Trump, for some reason.

Inside there was a giant screen, this was where the action was but there was no sound being played, instead some music was on. The screen switched between Fox News and CNN every half hour or so, presumably to reflect the spectrum of US political views, or at least the acceptable spectrum anyway. 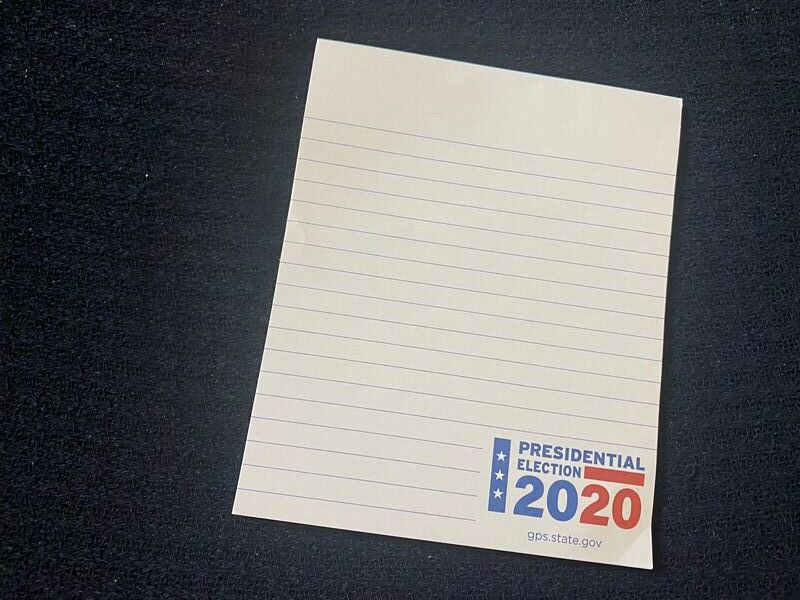 There were also some tables where a fun mock election had taken place, plus an info table with some swag (see the photos in this piece) and a booklet explaining the US electoral process in all its glorious, frustrating, and absurdly complicated glory (just count all the votes and give the crown to the winner! How is this not how it is done? – say all non-Americans!)

Sadly a definitive result didn’t happen while I was there, and there was no whooping and/or hollering at all (which was what I was hoping for), plus not a single MAGA hat sat atop a single head (also a let-down). It was fun though, and nice to chat with a few interested folks while watching a frustrating political process play out.

Thanks for having me USA!