If you’re in mainland China, whether you’re looking for it or not, you will undoubtedly come across a brand of Chinese beer called Snow Beer (Mandarin: 雪花啤酒 xue’hua’pi’jiu [lit. trans.: snowflake beer].

It is officially the best selling beer in the world.

And you've almost definitely never heard of it, let alone seen it available for purchase.

But don't worry, you may not actually be missing out on too much... 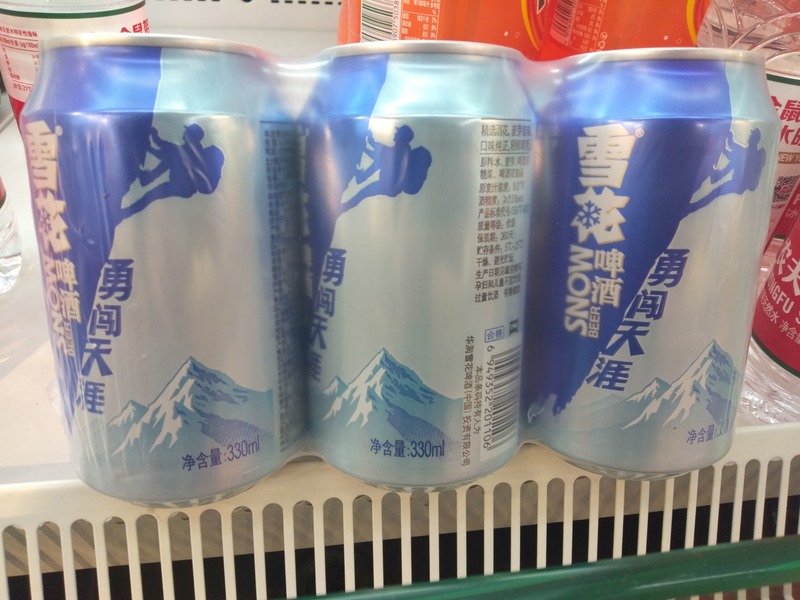 The most prevalent variety of the Chinese beers, Snow Beer is commonly referred to as 干啤 gan’pi [trans.: dry beer]).

Snow Beer’s presence in nearly every shop, restaurant, and bar will make it easy to overlook as something unremarkable.

But Snow Beer is actually quite spectacular for one simple reason: it is the best selling beer in the world, and most consumed beer in the whole world.

The brand Snow Beer is owned by a state conglomerate called China Resources Enterprise, which has over 90 breweries across China, along with Heineken who also owns a 40% stake in the brand.

According to results from 2017, the production and sale of Snow Beer beat the runner-up (Budweiser) by over double the volume produced and sold – i.e. over 100 million hectolitres annually.

Fun Fact: China’s baijiu also takes the reign; it is the most-consumed spirit in the world!

Where Does Snow Beer Come From?

The Chinese beer Snow Beer originally comes from a city called Shenyang in the province of Liaoning, China. It was first created in 1993 - and therefore shares a birthday with Koryo Tours!

And even though the brand’s main brewery is now based in Beijing, Snow Beer still seems to be more prevalent in Dongbei compared to other regions of China.

Interestingly, 4 out of 10 of the world’s best selling beers come from China.

These include Snow at number 1, Tsingtao at number 3, Harbin at number 7 and Yanjing at number 8 (according to 2017 results).

Fun Fact: There is a well-known story in Shenyang about a certain Snow advertisement that appeared on one of Shenyang’s landmarks, the TV Tower. Apparently, the advertisement was placed so high that even after Snow stopped paying for its presence, the city would not provide the funds required to remove it. This resulted in free advertising for Snow for many years upon the completion of its initial contract for the advertisement!

Where Can I Buy Snow Beer?

Snow Beer is sold almost exclusively in China. However, there are some records of sales in Hong Kong and Singapore, where the brand has yet to gain its footing.

It’s likely that the beer can also be found in other nearby countries, but it has not garnered any sort of notoriety compared to that which exists in mainland China.

The brand seems to see most of its popularity in the northern and northeastern regions of China, although it can be found virtually everywhere in the mainland. It might be hard to believe that the world’s best-selling beer is only widely available in one country, but this just puts into perspective the baffling size of China’s population and the sales power contained within it.

What Types of Snow Beer Are Available?

Snow Beer boasts a wide variety of variations on the original Chinese beer brand. These include;

The most popular varieties are Draft Beer and Brave the World. These different varieties can be sold in cans and/or bottles of varying sizes to meet your preferences.

Fun Fact: Twist-off caps on beers are rare to come by in China, so grab a bottle-opener before you end up slicing your hand thinking you just have a beer with an exceptionally tough seal.

How Much Does Snow Beer Cost?

This is obviously part of its appeal and a major factor in its high sales volumes.

Although the cheap Chinese beers have caught traction, the brand has also expanded into larger-sized and higher quality bottles that are reportedly sold for up to 60 CNY, or 8.55 USD (at the time of writing), each.

Fun Fact: In China, you’ll often be asked if you’d like warm or cold beer, which seems like a very odd question to many travellers. If you aren’t in a Western-style bar and aren’t asked this question, it’s safe to say that you can probably expect a warm beer.

Is Snow Beer Really That Good?!

To put it bluntly, Snow Beer is pretty bad.

Many people would even go as far as saying it’s awful or even that it’s the worst they’ve ever tasted (just check out some of the online reviews).

The brand’s name, Snow, supposedly comes from the look of its vibrant white head, but many people like to joke that the name actually comes from the taste, as it’s comparable to cooled water.

Not so different from Bud Light, Snow is a watery lager with nothing much to boast about aside from its cheap price and, as a result, its sheer popularity.

Another selling point might be its low-calorie count, at only 120 calories per can.

Although it is doubtful that anyone would recommend the beverage for its taste, it is worth having a try for bragging rights.

Unless you’re from China or have lived there at some point in the past 20 years or so, it’s likely that your friends and family back home will have never heard of Snow Beer.

This provides you with a good piece of drinking trivia and the opportunity to boast your alcoholic worldliness.

(But it’s not good for much else)

Fun Fact: If you’re an expat in China and have never heard of this omnipotent Snow Beer - have you hear of Mons? Wrongly known to some as “Mons” beer, this mistake comes from the front packaging which seemingly can be read as either Snow or Mons, depending on how you look at it.

Interested learning about North Korean beer?
Learn about Pyongyang Beer or have a look at our Brewery Industry Tour of North Korea.