Gareth Fuller recently became the first Western artist to draw Pyongyang thanks to his trips there with Koryo Tours.

The result is a stunningly detailed hand-drawn panorama called Tourist Map Of Pyongyang.

We sat down with him to find out more about his work.

Q: When did this obsession with maps start?

Fuller: The first piece of artwork in my ‘Purposeful Wanderings’ series is London Town, which I began in 2004 when I started to explore London on foot while working full time in the media.

But a love of maps and exploring comes from my youth — first as a member of the Boy Scouts, and then later when getting my Mountain Leader Award.

As a teenager, I hit the road with a backpack before gap years were a thing.

Q: Is there a particular trip that had a significant impact on you and your work?

Fuller: When I was 17 I took a boat from Almeria, Spain to Nador, Morocco. I think this small adventure, back in 1997, sparked an obsession with culture and places.

As an artist, I borrow from cartography; the work I make comes from a process of walking and exploring, and the commentary I gather along the way becomes the art.

In much of my work, I’m attempting to capture a sense of place. Using geography and the idea of a map helps me to do this. Although when I sit down, I visualise a final picture, and a complete drawing, rather than anything that resembles a normal map or illustration.

Fuller: I was particularly interested in visiting a city designed almost from scratch, under a socialist vision, and seeing how this kind of modelling would make an individual feel.

Hopefully, the art I’ve created based on this experience encourages some pause for thought, and a consideration of the city, minus the headlines, but with a view to its culture and people.

I’d like it to spark conversation and create a positive dialogue.

Q: Were you restricted during your time in North Korea? What was it like working there?

I wasn’t able to roam the city freely and always had Korean guides close by my side. Having them alongside me was invaluable, however.

They were like walking encyclopaedias. Whenever I had a question they were there to help. Part of my typical process is having access to the landscape around me and being able to explore freely.

This was turned upside down in Pyongyang and forced me to change my methodology. It altered my approach to creating this particular piece and my experience on the ground in the city. 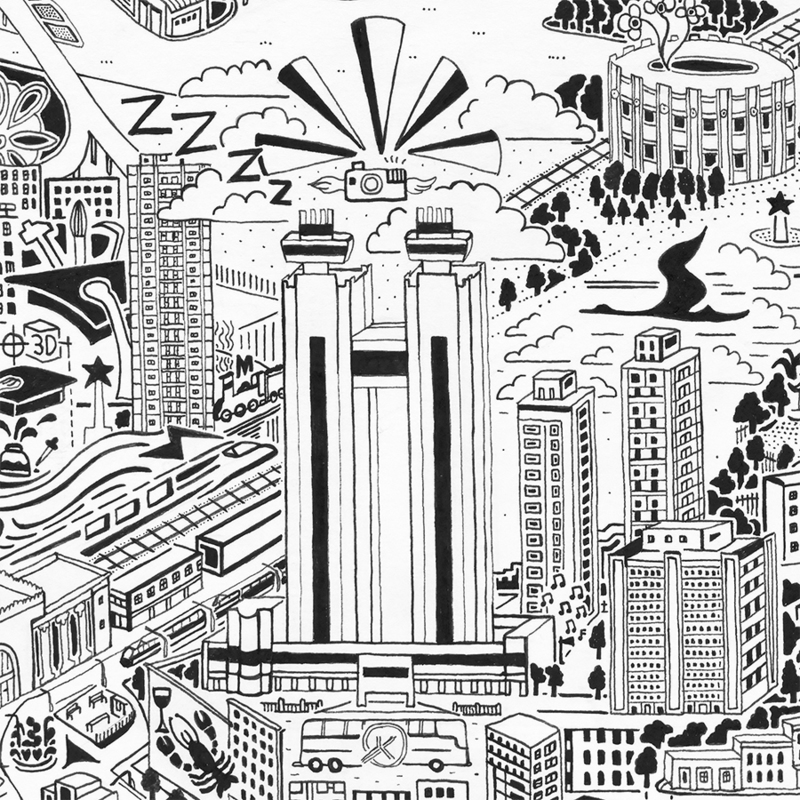 Q: How was your tour leader during the trip?

I took part in a group tour on my first trip to Pyongyang, and it was a great experience.

Our guide Greg was super knowledgeable and is studying the Korean language.

It seems like Koryo’s guides have specialisms and skills that you don’t always find in travel companies. I’ve had the pleasure of meeting most of the team and to say they are passionate about travel would be an understatement.

They’re definitely the experts, not just for Pyongyang, but also for the other destinations they travel to, like Russia and Mongolia.

Q: What’s your favourite part of your Pyongyang map?

That’s a tricky question. I particularly like the top of the panorama.

Although the places I’ve depicted in this part of the map are geographically incorrect, they are significant icons for Pyongyang and the culture there, including Mt Paektu, their satellites and co-operative farming.

Q: How do you draw something like this? Where do you begin?

I began this piece by compiling over 5,000 reference photographs, my notes and ideas, and then moved on to reading books and diving into digital resources.

After scratching my head for quite some time — at least one or two months — I began drafting some of the natural topography.

The Taedong River became the first narrative in the piece, and from there I slowly worked across the board. I work with archival pigment ink.

Q: How does it all come together as a print?

Printing editions of my art is a big part of the work.

I collaborate with fine art printers and decide on the best process and materials.

Reproducing the intricate details from my drawings can be tricky. It’s essential to create a print that doesn’t lose the depth of the original artwork.

Creating the edition is another artistic process in itself. We don’t stop with just one colour, and usually proof various colourways and experiment with new ideas.

Q: What music do you listen to while you’re drawing?

I tend to listen to all genres. I know that’s a lazy answer, and you’d like me to reveal a guilty pleasure like ABBA Gold, but it’s true.

There is a genre for all stages of the work. Although with this piece, in particular, I tended to not listen to anything with lyrics.

Mostly for clarity, I listened to electronica — it helps if the music takes you on a journey.