This fascinating museum is housed within a very picturesque Buddhist temple with the entrance right off the Third Ring Road in Beijing. Now known as Dazhong Si (Big Bell Temple) it was originally called Juesheng Temple when built in 1733, during the Qing Dynasty, and was a place for the emperor to go and to pray for rain – something that the desert-bound Beijing is perennially in need of.

Comprised of six halls in a line layout familiar to anyone who has been to the Forbidden City or any of the main Buddhist temples in China, bounded along the sides by longer halls this is a very pretty and peaceful place (as long as you ignore the rumble of traffic on the major road just outside).

No longer a working temple, since 1985 this had been the location of the Ancient Bell Museum, a little-known but very worthwhile member of the pantheon of Beijing musea, of interest to more than just lovers of bells I think, and with bilingual explanations of everything on display.

Each hall contains a different exhibit, some have models and replicas of truly ancient bells, dating back several thousand years and across the multiple dynasties of Chinese history. From musical bells to ritual bells, different shapes, materials, and uses. Its all rather fascinating to be honest, even if one usually only interacts with a doorbell or bicycle bell in everyday life. Sadly you’re not allowed to ring any fo them although in some exhibits there are recordings played. 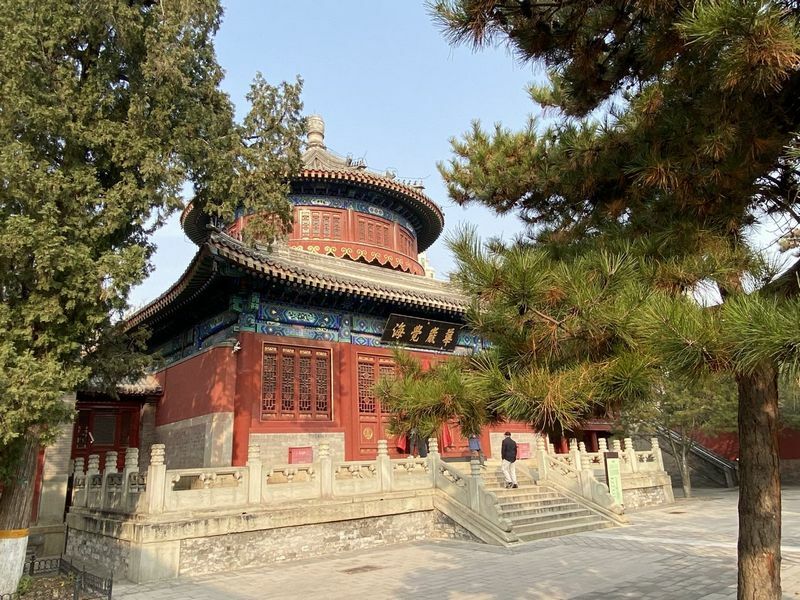 Exhibits on the methods used to cast bells are very well done, as well as details on the meaning of each design, use, and the general culture and history of casting bronze devices beyond just bells (astronomical devices, religious artefacts, and so on).

At the time of visiting (Nov 2020) some halls were closed due to the ongoing COVID issues, but even these halls had their doors open so a peek inside at some of the larger bells is possible.

At the north end of the museum is the main attraction, the massive Yongle Great Bell hanging in the Great Bell Tower, a structure built in 1743 and topped with a pretty round pavilion-like upper level from which the 46 ton bell hangs. This bell is rung still on certain occasions and can reach 120 decibels, making it audible dozens of km away ion a quiet night (no longer a thing in this part of Beijing, especially given the third Ring Road right next to the museum). A map near the temple entrance shows the parts of Beijing which the bell can be heard from, my house is well within those limits but I’ve yet to hear the Yongle Big Bell ringing out clearly in the night, maybe I just have to listen harder! 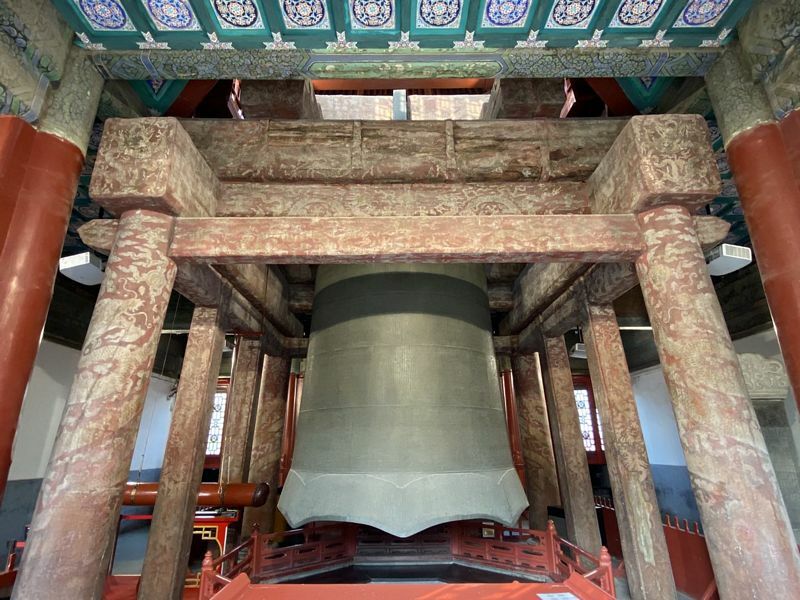 Yongle Big Bell itself was cast in a previous Dynasty, the Ming Dynasty and during the reign of Emperor Yongle (from whence the name of the bell comes). In the 15th Century he moved the capital of China back to Beijing from Nanjing and initiated three great projects; the building of the Forbidden City and the Temple of Heaven, and the casting of this bell. So

Covering the bell are 230,000 characters of Buddhist scriptures, in both Chinese and Sanskrit. The bell is clearly a magnificent piece of work and is a worthy centrepiece to this museum.

Spending 1-2 hours here would be very easy, it all depends how much you want to know about bells and ancient technology of casting them really. Even as a purely aesthetic visit though this is well worth the time and is an easy place to get to. The entry fee is reasonable. This Ancient Bell museum is really only let down by its pretty grim WCs and also the mystifying lack of a gift shop. This would be a perfect place to sell guidebooks with pictures of various bells, and small model bells too, honestly I have almost no interest in bells and their history but I would have happily spent some money on a model of the Yongle Big Bell. Instead, I departed only with photos and a small leaflet that strangely is only given out at the exit (when I questioned why they wouldn’t have them at the entrance I was simply told by the guard that I didn’t have to take it and he didn’t really care why it was only available on exit).

The architecture here does bear some passing similarity to the Forbidden City so if you’re looking for something very classically Chinese to visit and have less time than is needed to go through the massive Palace Museum and also want to avoid the crowds then you can do a lot worse than the Dazhong Temple Ancient Bell Museum. A strong recommendation. 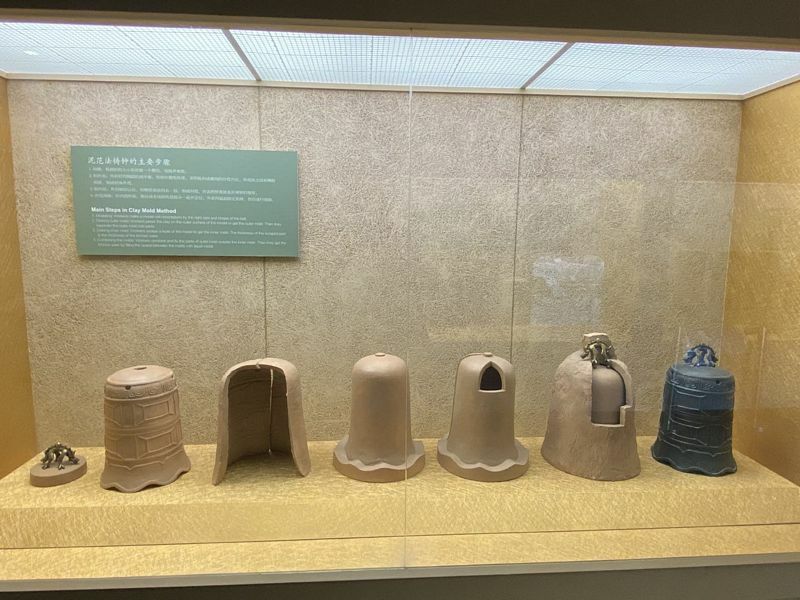