At first, my senses peaked my imagination went from fiction to fact in seconds.

I awoke early as I usually do when sleeping in a yurt, my head a little fuzzy from the previous night's vodka.

It was one of those mornings where the warmth of my sleeping bag seemed to outweigh the benefits of venturing beyond. Although as I was a guest and the resident family were already making moves preparing for the day, I thought it best to stir. After a cup or two of instant coffee, I decided that before driving on, I would visit the nearby waterfalls.

The waterfalls here are known as Turgen falls claimed by some to be the country's largest, although not true, they are indeed gorgeous nestled against a backdrop of snow-capped peaks and ringed by alpine forests. Before heading off, I say a fond farewell to my hosts, a family I have known for many years now; Typically, visiting as part of Koryo tours beyond the steppe tour, I have to say I always enjoy the stay as much as the tour group.

Cookies, pasta, and tea were accepted as a welcome gift while my offer of cash was quickly refused. In return, the family offered me the use of a horse to visit the nearby falls, a bag of curd, a fox skin, and, of course, the night I had already spent eating, drinking and sleeping in the yurt. The deal seems a little unfair, but this is life in real Mongolia; one day, it will all be paid back. I took the curd, refused the horse, and said no to the fox skin as I already have one from the previous year. My reason for rejecting the horse was that I wanted to do a little further exploring and in the valleys close to the Chinese border, and a horse wouldn't get me over the harsh terrain.

Journey to the Waterfalls

After driving a little closer to the waterfalls area, I set out on foot; the chocolate box scenery was stunning as I climbed towards my goal.

Past sweet-smelling juniper bushes and scores of wildflowers, I followed the mountain stream on taking care not to acknowledge many of the local Mongolian campers who had made this beautiful river valley their summer home. I wasn't rude, but this year with the lockdown in place, I stand out even more than usual and knowing how welcoming the local hospitality is in these parts, there's a chance I may not reach the waterfalls.

I surprise myself with my sense of direction no local guide I locate the Turgen falls from memory; they are as pretty as ever and do not disappoint.

The churning water of Turgen falls an attraction for many tourists; however, today, these are not my planned destination, the waterfalls I want to visit are nestled deep within the rugged mountain valley beyond. Standing between me and the remote falls lies a large - stone river and waist-deep vegetation. I estimated that it might take around an hour to get there may be more; I have a tent in the car, plenty of food and my planed afternoon drive can always wait until tomorrow.

As I look back now, the most nerve-racking moment was crossing the river carrying the Koryo camera. With no clear path at all, I placed rocks as I went wobbling away across the turbulent water, I eventually crossed ready to begin my adventure. My next obstacle was a large stone river reminiscent of the one found in Pujon county North Korea. The best way to describe it is as a large river completely covered with boulders and rocks cutting through the surrounding green landscape.

Crossing the stone river was perilous as many of the stones and boulders were lose so it could be easy to twist or, at worst, break an ankle. Of course, I made it across and with no one to see me I would like to say I skipped and hopped away like a mountain sheep; whereas in reality, I wobbled, slipped and from afar probably looked like a giraffe trying to skate!

Once across the rocks, my next task was to find a path through heavy vegetation, which in places was above head height and became more complicated when I lost sight of where I wanted to go, making it easy to head in the wrong direction. As I clambered through the undergrowth things began to become even more challenging as the branches pulled and snagged my clothing at around 3000 metres above sea level all I could hear was my breath as I chugged away trying to breathe.

I eventually broke through the scrub only to find another branch of the stone river, which was somewhat soul-destroying. After over an hour of trekking, it seemed I hadn't gone so far at all; I layout on a large flat rock in the warm morning mountain sun and began to contemplate the world. I gained my breath, and the only sound was the river in the distance and the trickle of the water deep below the stone river rocks. As I lay sunning myself, I became aware of a rustling amongst the scrub I had just traversed!

At first, my senses peaked my imagination went from fiction to fact in seconds.

Was it a velociraptor trapped for centuries in this valley, a solitary snow leopard or at worse and more likely a bear? I moved to face the direction of the noise positioning myself on the rock to absorb a possible assault my right hand clasped the hilt of my knife! At that moment a goat burst through the nearby thicket looking far more startled then me it made a loud bleat before turning and scrabbling to flee stumbling and tripping back into the brush. I breathed a sigh of relief and continued with my adventure eventually reaching a rocky outcrop with a view over the area; I had sighted this earlier, and it gave me cause for celebration as it was only a couple of hundred meters from the waterfalls. After dipping down once more into the scrub, I eventually emerged at the modest yet beautiful waterfall. 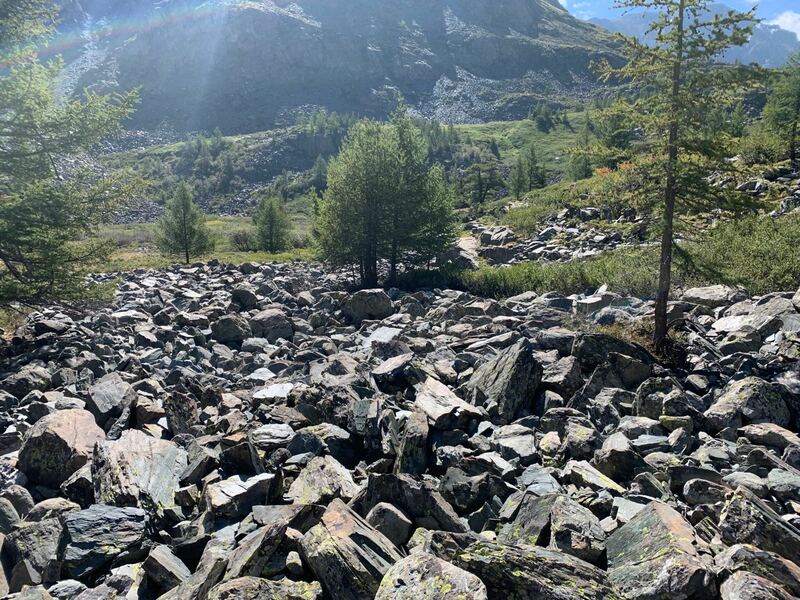 Crisp crystal water pouring over the jagged rocks made the sight almost otherworldly.

In the chaos of my trek, I had lost my water bottle, which was quite upsetting and for a minute a little worrying. Until I realised I was on a river fed by clear mountain spring water. I took a gamble and drank directly from the waters rocky edge. I have to say it was the sweetest tastiest water I have ever sampled.

After relaxing for 20-30 minutes, I thought about heading back, but I have always been a what's around the next corner kind of a guy I decided to peer above these falls to the next level. Oh boy! Even bigger, more picturesque falls, so I headed back into the bush and pushed onto the next spectacle.

The whole area was like a scene from a movie, with not a single person in sight, I explore this border frontier, knowing that just over the mountains lies the area of Xinjiang China. The next set of waterfalls were again even more stunning and well worth the hike here high lie rocky plateaus, roaring water and surrounded by gorgeous wildflowers. Time to turn back but to the south-west one more ridge and one more waterfall, surely I can make it?

I cross the river and begin the climb. Through the scrub, I work my way higher every so often the sky disappears as I drop down amongst the tangle of branches. I eventually make the next falls but realise that the ridge is a little too far. I cross the waterfalls and sit admiring the valley, drinking fresh mountain spring water and munching on wild rhubarb I then decide its time to begin my way home.

I retrace my steps working through the scrub across the rivers, streams and rocks eventually emerging back at the entrance to the valley. I look back, smile and tell myself, next year as soon as this virus has passed I'll bring a tour here.

As I climb into the car, I plan to drive as far as the village of Tsengle and find a place to camp.

I cross back over the rickety bridge as heavy black clouds build behind me. Over the moraines, I eventually meet the Hovd river the road following alongside. I am making excellent time as the skies open unleashing rain that feels as though it is trying to drive the car into the ground.

The unpaved road turns to mud whilst the clear waters of the Hovd river churn into a heavy chocolatey brown. Thunder breaks and the lighting flashes overhead the unpaved road takes on the appearance of a small stream. I think to myself I may just fit in a few more adventures like this before my return to Ulaanbaatar and next time bring the family!