Whether you know it as Makgeolli, 막걸리, Nongju, or Fight Milk, this Korean alcohol is a beverage you need to know more about.

Makgeolli (막걸리) is traditional Korean alcohol. It's a kind of sparkling rice wine that is cloudy in appearance, sweet in taste, and good for you. It's a perfect partner to many Korean foods and is also pretty simple to make yourself at home.

In other words, it's one of the best drinks around. So why have so few heard of this Korean alcohol?

Makgeolli is the oldest Korean alcohol drink dating far back to the Koryo Dynasty (918-1320). Traditionally home-brewed and drunk by farmers, Makgeolli is making a well-deserved comeback in Korea and over the world. Together with beer and soju, Makgeolli is one of the most popular Korean alcohols in both North Korea and South Korea.

Makgeolli also goes by the name of Makkeoli, Nongju (lit. 'farmer's drink). By the Brits it's nicknamed 'Drunken Rice', and also goes by the bizarre name of 'Fight Milk', as christened by Scottish band Colonel Mustard & The Dijon 5 in 2018.

Whether you know it as Makgeolli, 막걸리, Nongju, or Fight Milk, this Korean alcohol is a beverage you need to know more about. 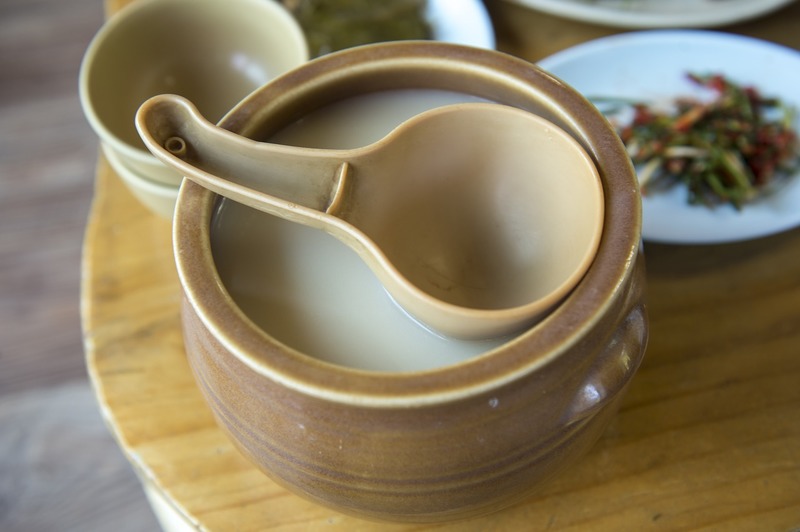 Makgeolli has a distinctive, complex taste that is unique to Makgeolli. There's really nothing like it.

Drinking it for the first time can be quite the experience. Milky, sweet, and fizzy, this Korean alcohol is a drink that confuses the senses.

Makgeolli can have a range of tastes, and indeed your drinking Makgeolli experience will likely go on a unique taste journey through many of them. Sweet, sour, tangy, creamy, bitter, fruity, floral, notes all topped off with a bit of a chalky dusting. Your first time drinking Makgeolli will have you questioning its cloudy appearance produced by chalk sediment, and have you wonder if indeed there is any alcohol content in it due to the sweetness.

The best way to truly understand the taste of Makgeolli is by trying it yourself. If you're deterred by the thought of fizzy milk, do make sure to close your eyes on your first sip to truly appreciate the experience.

Don't be tricked by this Korean alcohol's sweet and ease-to-drink-ability. (The mistake I made at first. My guess was around 2-3% alcohol - let's gulp it all down shall we!)

Makgeolli can contain anything from around 6-18% alcohol. Nowadays, however, commercially produced Makgeolli sticks in the middle around 6-9% alcohol content.

How to Drink Makgeolli

Makgeolli is served in small cups. Not soju style small glass shot glasses, but rather rounded cups made from a variety of materials.

This Korean alcohol can be served as an everyday drink, but also on special occasions like weddings.

It's best served cold. If you're drinking it from a bottle, remember it's fizzy. But also there will be sediment in there that needs shaking up. So give it a shake - a gentle one - leave it for a minute, and open the lid slowly.

Makgeolli is the oldest Korean alcohol. It dates back to the Koryo Dynasty - and some say it even dates further back than this to the Three Kingdoms era (57 BC - 668 AD).

It was originally called 'nongju', or 'farmer's drink/farmer's alcohol', because it was a drink of farmers and peasants due to its high nutritional content and also high carb content.

Due to its stigma of being a farmer's drink, Makgeolli fell out of favour for many years, with drinks like beer becoming more popular.

Nowadays, it's made a comeback in Korea, with many companies mass-producing it. Makgeolli is readily available in bottles in almost every convenience store in South Korea, and in various different flavours and variations. Since it's commercially produced, it has, of course, lost some of its quality - and indeed also some of its alcohol content. Originally, this Korean alcohol would be around 12-18%. In order to fit a wider market, many companies stick to 6-9% alcohol content.

Much of the Makgeolli you'll find made for export is pasteurized, and therefore has lost lots of its health benefits, and also flavour. This is due to the short shelf life of unpasteurized Makgeolli. 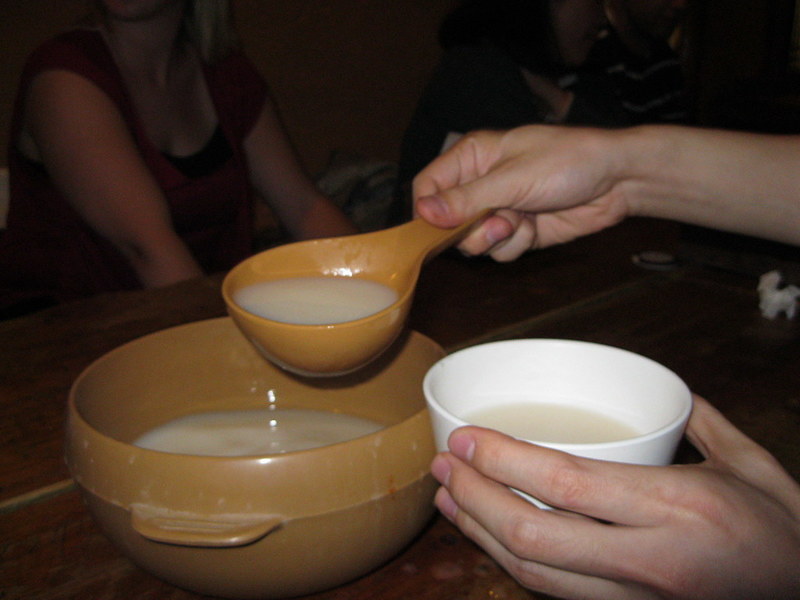 Makgeolli has a range of benefits if it's made in the traditional way, i.e. with no pasteurization.

This Korean alcohol is high in fibre, vitamin B, C and low in cholesterol.

The sediment at the bottom, however, means it's high in carbohydrates which results in about 54 kcal for 100 ml. You can get around this by not shaking it before you drink it, and therefore only drinking the clear drink at the top.

Makgeolli dates back from the Koryo Dynasty, pre-separation. Its foundations and culture are deeply rooted in Korean culture and society - including both North and South Korea.

You can find Makgeolli in many restaurants in North Korea, as well as commercially produced bottles in supermarkets.

How to Make Makgeolli

Makgeolli is fairly quick to make. Its fermentation process takes only 7-10 days.

This Korean alcohol is brewed from rice and 'nuruk' as a fermentation starter.

It is a simple combination of cooked rice, water and nuruk. Of course, recipes and ratios of this content vary, and you can also add in various other ingredients for different flavours or varieties.