Kim Jong Suk, known as the Mother of Korea, or, the Anti-Japanese Heroine, was the wife of the then-General Kim Il Sung between 1941 and 1949.

She is an important figure in North Korean revolutionary history from the period when Korean guerrilla fighters were operating against the Japanese occupation.

She is also one of the most respected individuals in North Korea, as one of the ‘Three Generals’ alongside her husband Kim Il Sung and her son, the General Kim Jong Il.

The term was created by Kim Jong Il as a way to officiate the fact that he, his father and his mother were the core of the Korean Revolution.

Kim Jong Suk’s portrait, whilst not as common as that of the President or the General, is still very common, especially in households, throughout the country.

Her grave is the centrepiece of the Revolutionary Martyrs’ Cemetery just outside Pyongyang and her legacy forms an important part of North Korea’s revolutionary story. 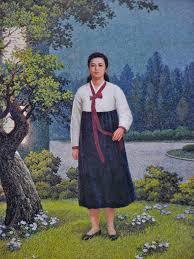 Kim Jong Suk was born on the 24th of December 1917 in Hoeryong, North Hamgyong Province in Japanese occupied Korea. Official reports show that she left Korea in 1930 and crossed the border into Manchuria to the village of Fuyan in Heilongjiang Province.

She joined the Young Communist League in 1932, established by the General Kim Il Sung, working her way up the ranks and also conducting the work of the Children’s Corps. At the time, Manchuria was not held by the Japanese and was described as the guerrilla zone.

According to the book ‘Kim Jong Suk’ written by Kim Ok Sun, a young revolutionary at the time of Kim Jong Suk’s arrival in Manchuria, she worked to establish one of the first revolutionary governments in the Yanji area in northern China.

The book describes how Kim Jong Suk encouraged members of the Children’s Corps and other Young Communist League members to clean the city, paint encouraging slogans and resurface roads.

Other stories from her early life include the tale of the ‘Jangsung’.

The story goes, that her village was being tidied and cleaned in preparation for a visit from workers and peasants from the “semi-guerrilla zone”.

However, above the gate of the village was a hideous gargoyle-type statue known in local folklore as a ‘Jangsung’.

The statue was supposed to ward off evil spirits, although Kim Jong Suk thought the superstition did not align with the modern, socialist way of thinking and described it as nothing but a scarecrow.

She confronted the women of the village about taking it down but they refused, saying they had seen demons in the valleys and needed the Jangsung to protect them.

Long story short, Kim Jong Suk accompanied the women to the valley and proved that the ‘dancing demons’ they had seen were in fact dead Japanese soldiers whose bodies were emitting phosphorus.

The women agreed to take down the Jangsung, but soon after, Kim Jong Suk was confronted by an elderly man who demanded the Jangsung be returned.

He argued that his grandson had fallen ill due to the anger of the gods at the removal of the statue. Kim Jong Suk reportedly returned to the man with mountain bee honey and medicines which she obtained from locals, keen to help.

Eventually the boy recovered and all was well.

According to Kim Ok Sun, she, and other communist league members, burnt the Jangsung statue.

This is one of many stories from a ‘misty’ part of Kim Jong Suk’s life. During this period, information was scarce and even today, we rely on second hand accounts from people about what really occurred in Manchuria.

During the period of Anti-Japanese Revolutionary Struggle in Manchuria and northern Korea, it is reported that Kim Jong Suk took on the role of a teacher to young guerrillas, especially women’s units.

The official narrative suggests she worked alongside women fighters and encouraged their learning of basic first aid, radio operations and other important skills.

There’s a great parable-like tale she tells to her students while they’re studying morse code;

During the lesson, Kim Jong Suk and her unit took a break and sat beneath a tree. Some of her comrades mentioned that they’d love to return to the homeland, even if it meant not completing the studies courses. Reportedly, these soldiers were keen to operate behind enemy lines without the appropriate training – Kim Jong Suk then told them of a man called Comrade Kim who didn’t complete his training and thus, for some reason, couldn’t tell the difference between an umbrella and a parasol (one being for rain, the other being for sun). Comrade Kim went on to use a parasol during a rainstorm, confusing the Japanese who investigated him and promptly arrested him.

The lesson here is, study the revolutionary speeches of the General, learn first aid and how to operate a radio… and learn the difference between an umbrella and a parasol.

During the period of anti-Japanese activity, Kim Jong Suk married the General Kim Il Sung who was commanding various revolutionary activities against the Japanese from the Mt Paektu Secret Camp near Samjiyon in modern-day Ryanggang Province.

There are many conflicting accounts as to the birthplace and the year and even more dramatic stories about the events surrounding the General’s birth.

Kim Ok Sun didn’t describe the birth itself, although she recounts holding the young general in her arms. She also writes about how the women of the Mt Paektu Secret Camp sewed a quilt from left over material for Kim Jong Suk, who had previously refused to take any extra blankets for herself or her newborn.

In the few months before liberation, there’s another story of how Kim Jong Suk, acting like a high school girl, offered to act as a go-between between Kim Ok Sun and a young Korean People’s Revolutionary Army officer, Choe Sok Chon.

In the aftermath of liberation from the Japanese occupation, Kim Jong Suk was sent to Chongjin, in the far north of North Korea. This was to perform various inspections of the newly liberated factories and to provide reports of the situation back to the new revolutionary government being established in Pyongyang by her husband, the now Premier, Kim Il Sung.

According to official history, she spent much of her time as a political representative, providing on-the-spot guidance to political officials, factory workers and others.

Kim Ok Sun recounts how, in 1948, she accompanied Kim Jong Suk and he young son, the General Kim Jong Il, to a military parade in Pyongyang.

This would have likely been one of the first, if not the first, military parade in the country’s history. Held in front of Pyongyang Railway Station (as opposed to the familiar location, Kim Il Sung Square, which had not yet been built).

At 02:40 on September 22, 1949, Kim Jong Suk passed away. According to official records, she was in the company of her husband at a hospital in Pyongyang. She was only 32 years old.

Her body lay in state in Pyongyang at the Assembly Hall of the Party Central Committee surrounded by flowers. Her funeral took place on September 24 at midday.

She was buried at the foot of Moran Hill in the city centre.

Today, her burial place is located at the peak of Mt. Taesong, overlooking the city. Kim Ok Sun, in the final chapter of her book, suggests she was placed here by the General Kim Il Sung so she could see how Pyongyang would grow into a city of the people. She writes about how all the great monuments and buildings of Pyongyang are visible today from Taesong. The Juche Tower, the Arch of Triumph; cultural buildings and new modern developments.

Kim Jong Suk is known in Korea by many titles; the Anti-Japanese Heroine, Peerless Heroine and, above all, the Mother of Korea. She is revered inside the country alongside President Kim Il Sung and General Kim Jong Il as an important revolutionary figure.

There are many revolutionary sites across the country dedicated to the activities of Kim Jong Suk. Most notably, her native house, where she was born. The small house is located in the centre of Hoeryong and is open to visitors. Similar to Kim Il Sung’s native house in Mangyongdae, the building has been preserved on its original spot.

Many Koreans still visit the Revolutionary Martyrs’ Cemetery to pay respects to the Mother of Korea. Most of the veterans from the Anti-Japanese Revolution have passed away, although, Kim Ok Sun ends her book by writing about how she takes her grandchildren, every year on the anniversary of her death, to the grave of Kim Jong Suk. She also notes how the cemetery is full of third and fourth generation “revolutionaries” paying their respects.

This is a regular occurrence here, many Children’s Union, Young Pioneer and Kimilsungist-Kimjongilist Youth League groups visit the site to pay respects. This highlights just how important Kim Jong Suk is to the official revolutionary history of the country and how she continues to be revered to this day.