When you think of North Korea, fruit is not immediately what springs to mind. However they do grow, and there are some unique regional variations.

When you think of North Korean food, fruit is not immediately what springs to mind.

However they do grow, and there are some unique regional variations of fruit for North Korean food.

So, let’s cultivate this niche subject of North Korean food a little here with this niche list from Koryo Tours – your guides to the fruits of the DPRK (and tourism there, that’s our main thing!)

Pukchong is in South Hamgyong Province and produces red/yellow apples which are known for being very hardy, savoury, and able to last in storage for an unusually long time. Apple trees planted in this area begin to bear fruit within five years of planting, and are apparently “resistant to cold and diseases” which is just as well as an apple a day keeps the doctor away!

The arch-rival to the Pukchong Apple (we imagine anyway!).

Hwangju is in North Hwanghae Province, a more temperate place than Pukchong geographically, so a less hardy fruit is grown here. Deeper red in colour after initially appearing yellow on the trees, these apples are eaten raw or processed into preserves, jam, and so on.

They have a whiter flesh than many other apple varieties and are also commonly stored through the winter as they are believed to retain flavour for up to 6 months after being picked.

Haeju is in the south of the DPRK, s far south in fact that it is below the 38th parallel.

Haeju pears contain a high amount of sugar (15.7% claims our source!) and weigh up to 400 grams, as with the apples above it is considered a good fruit for storage through a winter (something important in North Korea after all, even in the south of the country winter is a tough season). These pears are yellow in colour with grey spots, they can be found throughout the country and are well-known nationwide. The wood from a Haeju Pear tree is considered especially suitable for making furniture.

Haeju pear is found often sliced and included in a dish of Pyongyang Cold Noodles. 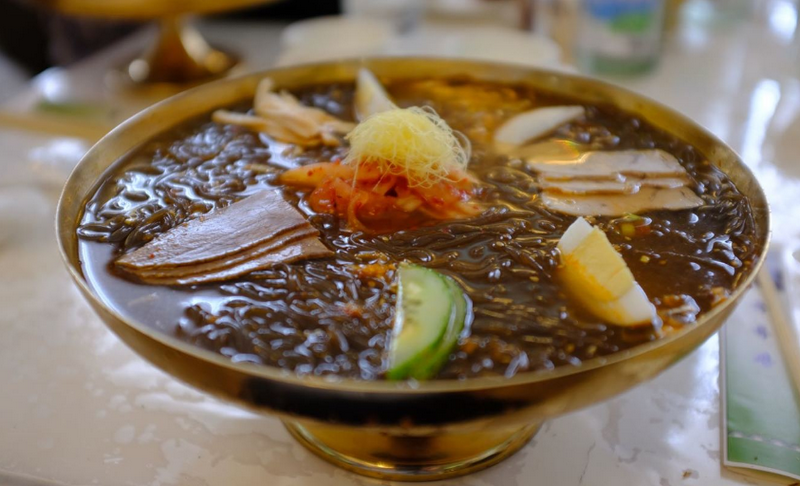 Back to the capital city, Pyongyang, home to a chestnut of such power that it can be considered a form of medicine!

From a tree that is said to live for as long as a thousand years, these nuts are plucked, very starchy and suitable for being ground into a kind of gruel powder to make various foods ranging from jam to cake mixture, this is a bit of a miracle product. It isn’t clear what medical efficacies these chestnuts have but it may be good to suggest that they are simply not bad for you and that a bit more chestnut in the diet is likely to be a good thing!

The wood of the Pyongyang Medicinal Chestnut tree can be used for furniture, sculpture, and making musical instruments.

The bark of the tree can be used for dye-making. So it’s a pretty amazing bit of flora really!

A relative of the Pyongyang medicinal variety, this North Pyongan Province version is known for its size (hence the name) with chestnuts from these trees weighing over 20 grams usually. Also used for making various foodstuffs while the tree itself has the same uses as its capital cousin. The Chongju Giant Chestnut is apparently considered to be impervious to blight, which is reassuring.

Tongchon is in Kangwon Province, a place where a mass campaign was organised to plant vast amounts of Persimmon trees all over the place; in orchards, roadsides, hillsides, and so on, this happened in the 1980s and as a result, they are now very common in this area. Persimmon is a pretty flexible fruit; can be eaten fresh, turned into any number of products (wine, vinegar, dried persimmon, rice sweetener), and even produces tannins used in industry to make products as diverse as raincoats and fishing nets! Persimmon trees are also considered to be aesthetically attractive and thus bring more beauty to the area they are planted and cultivated. Kagok is a village near to Kaesong, in the south of the DPRK, and is claimed in some sources to actually be the original home of the Jujube. This is less of a prestigious claim than Kaesong’s as the home of Ginseng, but still something to be proud of (especially in the jujube world!)

Kagok Jujube is eaten raw, made into candy and preserves, put in rice dishes, and also used as a kind of folk medicine as well.

Cultivating jujubes also assists with local apiculture, as the flowers are a good source of nectar for local bees. So, these are often found in the area of beehives and honey-makers.

South Hwanghae Province’s best peach is this sour one, weighing 130-150 grams we are told. With one side being green and the other red (die to which one gets more sun, apparently). White flesh and an abundance of juice makes this a messy snack, but it is also useful for making brandy, syrup, and jam. Very high in sugar content this fruit ripens late in the season after other sweet fruits have already been munched/processed. 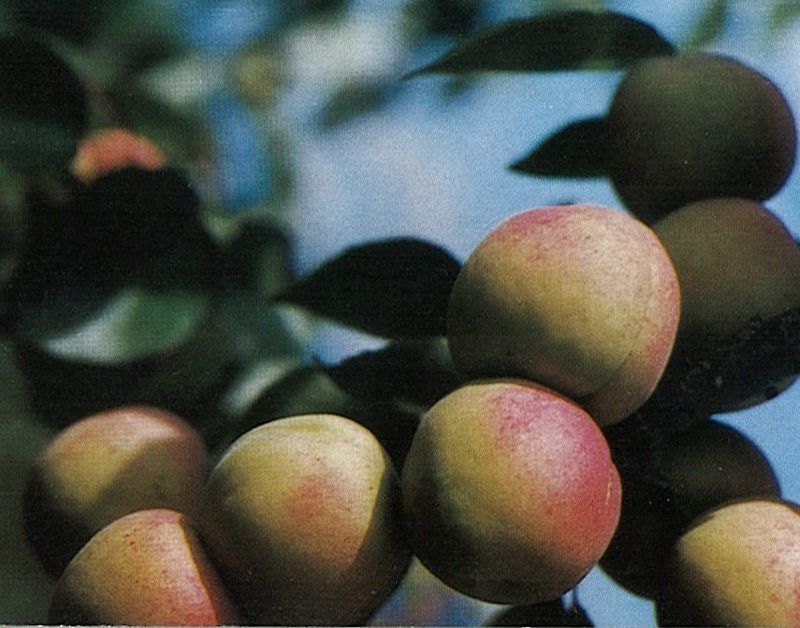 The challenger for the title of DPRK’s best peach! This one is a slightly chunkier fruit, up to 160 grams for each one. Also used for making brandy, syrup, etc and also high in sugar, this one is from nearer to Pyongyang so is found more commonly in the kitchens of peach-lovers in the capital city.

A challenger for the most revered fruit in the whole of North Korea. Hoeryong City is in the far north of the DPRK, is the home city of General Kim Jong Suk (wife of Kim Il Sung), and is known nationally for its ‘three beauties’ – the ladies of Hoeryong, apricot blossoms, and the White Apricots themselves too.

These fruit are sweeter than normal white apricots and specially bred to grow in the harsh northern climate, Mass campaigns have taken place to cultivate these plants in this area after only 120 trees survived the ravages of the Japanese occupation followed by the Korean War. It is said that the Japanese were jealous of how the spring blooms from the Hoeryong White Apricot put the famed cherry blossoms of Japan to shame! 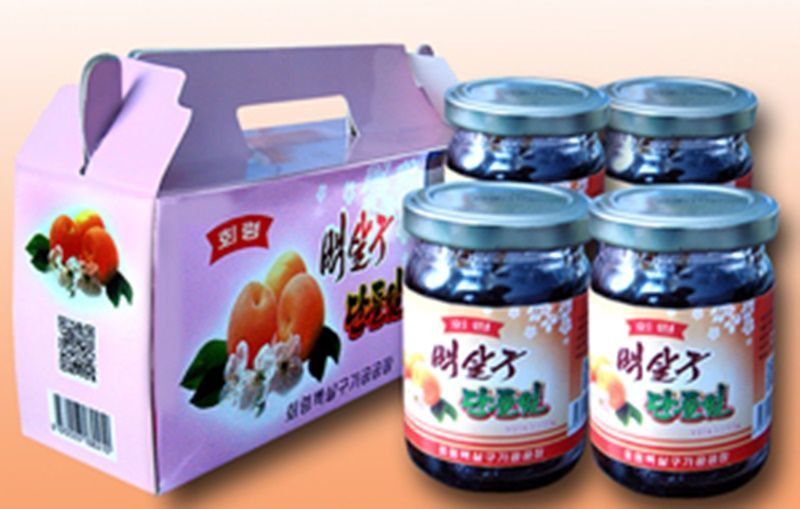 Sangwon County is close to Pyongyang and of course dares not compete with the White Apricot of Hoeryong, so they have gone with the red version, a much larger fruit (60+ grams compared to the smaller 50 gram white ones), these are commonly found in Pyongyang and are eaten fresh from late June as well as being processed into a range of foodstuffs.
The stones of Sangwon Red Apricots are used for making oil as well as some traditional folk medicines.

Sinchon, known to DPRK followers as the home of the US War Crimes Museum, is also home to something much less barbaric and horrific; Sweet Cherries!

Blossoming very attractively in April, and ready to be picked and eaten in June these are large and hardy fruit, this cherry is usually yellow with red spots and is often planted amongst other varieties of cherry as this acts to increase yields.

Reddish-brown and covered with white powder when picked, this plump plum is ready around August. One of over 10 different types of plum grown nationwide it is this one, from South Pyongan Province, that claims the prestigious title of the DPRK’s favourite plum!

The Walnut tree is a bit of a marvel, bearing fruit well after its 100th birthday. Every Sept-Oct nuts can be gathered from these trees and put to a huge variety of uses.

You can eat them (of course), use the oil-rich nuts to make pigments and soap, as well as confectionary. Folk medicine of Korea claims that these walnuts have a range of medical efficacies for the ears, eyes, and for skin ailments, but they also are used industrially in the production of tannin as well as charcoal. A bit of a miracle crop really, plus they are really delicious too!

So that’s our report on 14 famed fruits and nuts of the DPRK – while you might not get to try them all when you visit with Koryo Tours you will at least hopefully see that there are regional variations in climate and agriculture in the DPRK and that there are stories, legends, folk remedies, and all manner of cultural associations with certain crops.

Not just revolution and propaganda when you travel with Koryo Tours, you also get some local fruit & nut knowledge too!