It’s certainly an understatement to say it’s a shame that he actually wouldn’t guide any groups in 2020.

Yes, 2020 has been hard. The whole world has been bound by that one thought. Never has the world come together in such solidarity of one single emotion, and unfortunately it has to be a negative one.

So as we approach the New Year in 2021, I look back at how it started - and look forward to it ending. And maybe I can look forward to celebrating a 2021 - 2022 New Years in North Korea as I did two years previously.

The day started out with a drive to my favourite place in North Korea. Nampo. It’s my favourite place mainly for the fact that I love the overnight accommodation here. We hadn’t stayed there the night before. It’s an old place without sufficient heating for deep in the winter, so instead we left Pyongyang in the morning. Nampo is only about an hour’s drive away. As we spent the day visiting the sites, I started to make a short video on asking the North Koreans about their New Year’s resolutions.

We were so lucky on this tour to have North Korean colleagues we’re very familiar working with. In fact, I see them as friends a lot of the time. This means it’s a great experience for us - as well as the tour group. This also meant that they’re pretty open to me on camera and happy to chat away. The video came out really nicely, actually, with some really lovely answers about New Year’s resolutions - and some cheeky ones too. 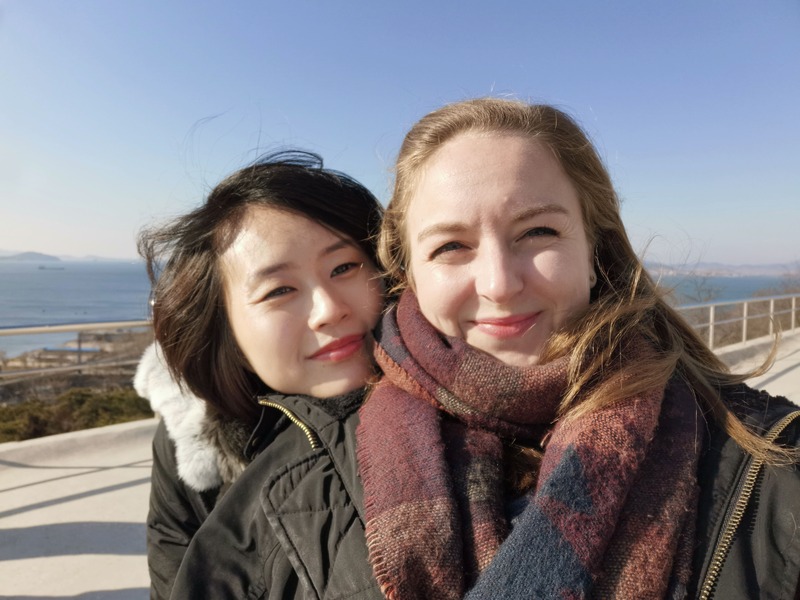 Heading back from Nampo, we stopped for lunch at the hamburger restaurant, or North Korean McDonald’s, as it’s fondly known as.

Since we’re back in Pyongyang and people have woken up a bit more, the excitement for New Year’s Eve has started to grow, and tourists start to ask what to expect in the evening.

You never know what to expect in North Korea. Everything is last minute.

“Is it Moranbong?” I asked my colleague cheekily.

That probably means “That’s what we’ve been told but you know we can’t confirm it since things change so quickly here.”

In the afternoon, we take a ride through Pyongyang on the trolleybus, trying desperately to huddle together to keep warm. A stark contrast to a couple of months ago riding it in the mid-summer heat holding my head out of the window.

We drive past the many sites of Pyongyang before arriving at the Arch of Triumph where we finish the trip. 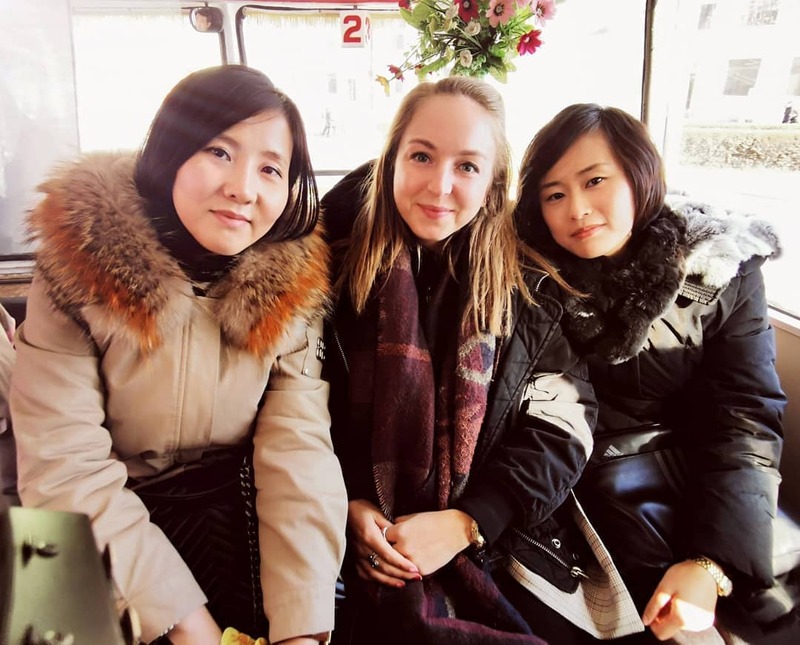 After a long day, it’s time to start winding down and let the celebrations begin. We stop off for a couple of pints of refreshing Taedonggang beer at the local beer bar.

Spirits are high as the buzz is going round about what we might get up to this evening. What Pyongyang has in store for us. It’s going to be a long day today, or a long night. So we make a trip back to the hotel to let everyone freshen up and get dressed up for some New Year’s celebrations.

And by dressed up, I mean wearing as many clothes as is possible and still able to move. It is COLD. Really cold. To the bones cold.

There’s not much me and my colleagues need to prepare, so we have a drink together in the coffee shop downstairs and wait for the group to come down. It’s a great opportunity to take some pictures in the lobby with all the Christmas and New Year decorations about.

There’s a snowman display and a sign wishing us a happy 2020.

And then it’s time to set off. 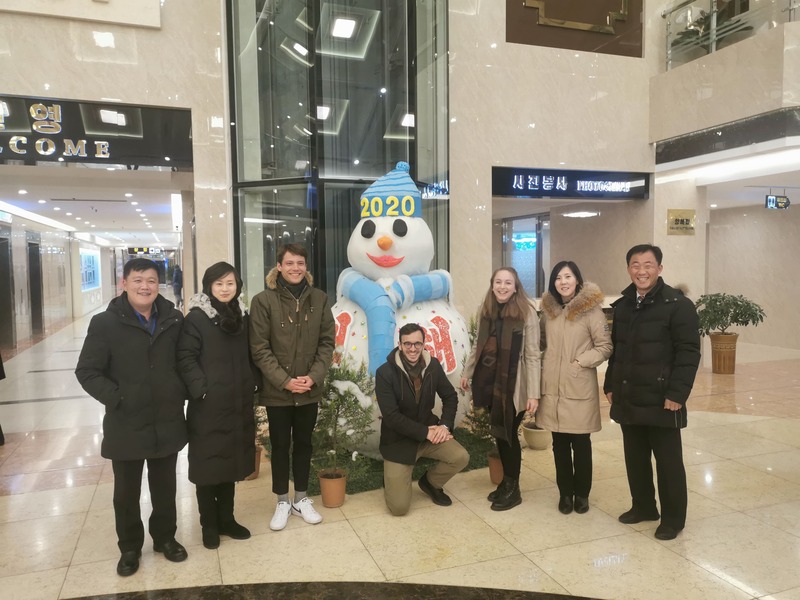 It’s my first time on the Rainbow Boat Restaurant. It’s a perfect mix of North Korean kitsch meets… I don’t know what else it meets. It’s just kitschy. The boat doesn’t move, unfortunately, but it’s pretty glamorous inside and you can walk around and explore the deck.

It sits right next to Kim Il Sung Square and the Juche Tower on the river Taedong, so there are some fantastic views around.

Once the groups have settled down to eat, me and my colleague take the opportunity to take some videos and explore.

We have arranged the tables to sit with the guides, and the manager has come for the occasion, too. It’s quite the celebration. There’s about 100 of us in total, and we’re sharing the main room with other North Korean families who are celebrating the New Year here. The atmosphere in the room is full of joy and celebration, which only gets more and more intense as the drinks start to flow over all the tables.

We chat amongst ourselves as colleagues, as friends, and I take the opportunity to ask some more New Year’s resolutions, including the cheeky cameraman and drivers.

It’s not long before one of the North Korean families has got the karaoke machine on the go and we’re met with the cutest toddler who takes centre stage to sing a song to the entire room. So brave, so cute!

The TVs are on inside the boat and they’re showing the action that is happening live in Kim Il Sung Square right next to us. And my dreams have been confirmed. There is a massive stage. There’s a band singing on it. And yes, later, Moranbong Band are due to come out.

Once we see this, we are all filled with excitement. It’s about 10pm and we can’t go outside yet. Otherwise, we will be standing in the cold for too long. So we enjoy the boat a little longer before the excitement can’t be contained and we decide to head on out - after a rigorous briefing to everyone about where we’re going, what we’re doing, and how and when we’ll get back to the bus. I forgot this for a few minutes. Because as the clock counted down and the crowd grew ever-more excited, I was in normality.

With most of the group scattered around amongst thousands of North Koreans, there’s not much you can do to keep an eye on the group. Of course, as a tour leader, you should stay alert and prepared in case something should happen, and you can’t just wander off. Everyone’s safety is the top priority. But in reality - you’re in the main square of a city during the New Year’s countdown. And everyone just wants to have fun. Besides, I’d briefed everyone in the group and, having already spent a few days with them, had built up the trust nicely, and there was no one I thought I need to keep an extra special watch on.

So I was stood in the middle of the crowd. A crowd of mainly North Koreans. All wrapped up in big coats and fluffy jumpers (it was about -10 outside) holding and waving about various flashing items. It was so cold, so cold you had to keep moving. That kind of cold where your fingers hurt. But it didn’t matter - because it was New Year’s. 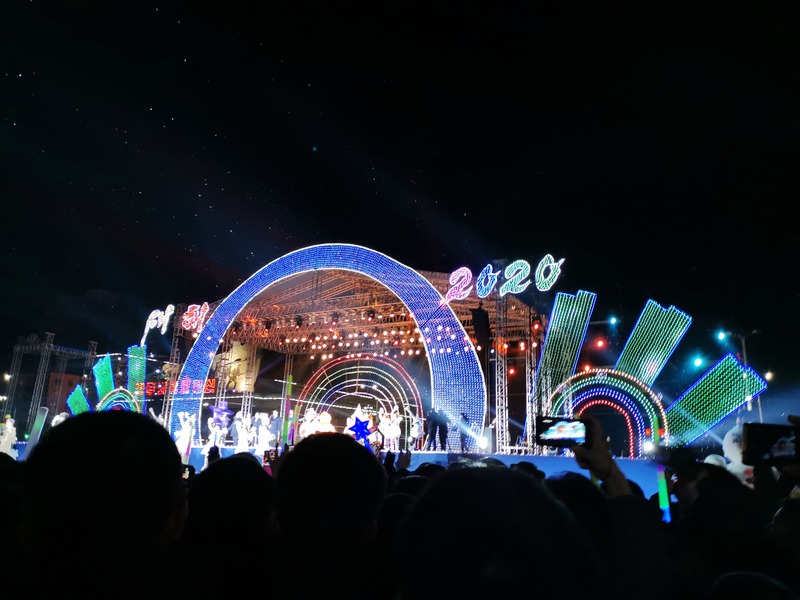 To the front of me was the main stage upon which the Moranbong Band were playing their catchy tunes, to the right of me a good friend and colleague from Koryo Tours, to the left of me a good friend and colleague from North Korea. We embraced the buzz of the crowd and started singing along with the tunes, trying not to stray too far from our group. Suddenly, I felt a tap on my shoulder, and turned around to see a familiar face. It was one of the Chinese speaking guides who I’ve spoken to on many occasions in Pyongyang since I also speak Chinese.

I asked him where his group was and he mentioned he wasn’t working. He’d just come along to see the show and enjoy New Year’s Eve. It was a bizarre moment - bumping into a friend in the middle of Pyongyang waiting for the New Year’s countdown. I pulled him towards our group and we carried on our singing and dancing.

Behind me, there was a group of male students singing loudly and pushing and shoving each other. I turned round to them and smiled, and just as I did so one of my favourite Moranbong Band songs came on. I’m a sucker for singing at the best of times, but hearing it live? Well, it would have been hard to stop me. I turned to my colleagues and we all started singing, and the students behind us joined in with us too. Soon, we’d formed a small circle where we were singing and dancing, the North Korean students, waving their colourful flashing sticks about, joining in as we danced around the circle.

It was New Year’s Eve, we were tipsy, the crowd buzz was electric, there was live music, singing, dancing, strangers are suddenly friends, everyone is smiling. And I remember thinking that it could be anywhere in the world.

And I hope there are many more moments like that in North Korea. The song faded down and the massive screens in front to either side of the stage started to project a video; the New Year’s Eve countdown. This was a one-minute production that counted down to midnight when the incredible fireworks went off and Kim Il Sung Square was lit with reds and whites, made only more magnificent reflecting off the smoke created by the fireworks. Pyongyang’s fireworks are some of the best I’ve seen around the world.

As the fireworks faded down, the Moranbong Band started playing ‘Let New Year’s Snow Fall’, and, truly as if by magic, I started to feel little drops of cool on your face. I looked around and sure enough - there was a white flurry (a small one at that) descending onto the crowd. It was snowing. It only lasted for about 10 minutes. But it was glorious.

Of course, because it’s North Korea, and you must presume that everything is scripted and fake, everyone questioned this. To be fair, I did too. It was too well timed.

But it’s been checked. There were no signs of snow machines that evening. 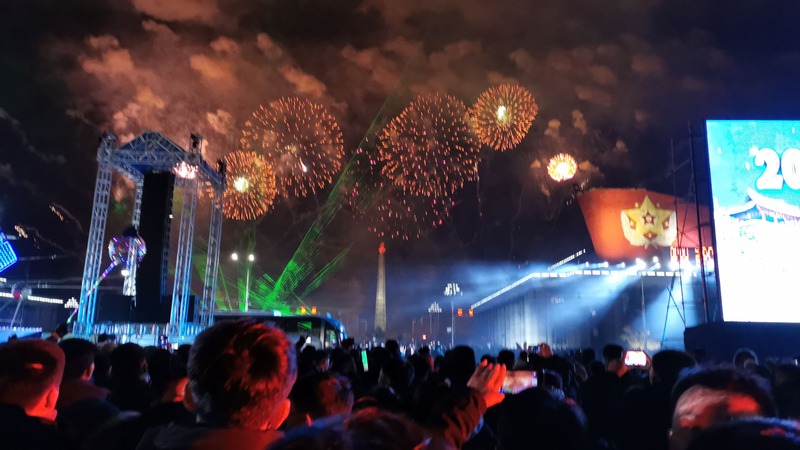 After a few more minutes of enjoying the show, it’s time to get everyone back to the bus. Which was never going to be an easy task, when there’s thousands of people to filter through.

With hands like icicles, suddenly the few minutes of fun and games were over and it was time to get back to responsible tour leader mode (I never fully left it - promise).

Trying to shout amongst the crowd, I tried to let my group know we were heading back to the bus. They all knew the way. I tried to keep back to round up any stragglers, and only about 10 minutes later I was double and triple-checking the count on the bus. Everyone was there.

We got back to the hotel and enjoyed a few more drinks (and ice-cream, weirdly enough) with our colleagues before getting a surprisingly decent night's sleep.

I was lucky, this wasn't actually my last time in North Korea. After a few days of rest at home in Beijing, I headed on back out to North Korea for what I had no idea would be my last tour in 2020. I had been going to North Korea at least once a month in 2019, spending about a total of just under 100 days in the country. I knew I probably wouldn’t be back in Korea until about April, though, as the tour season was coming to an end.

On January 15th I departed Pyongyang, saying to my colleague that I will see them in April.

“April?” His face was shocked. We’d been so used to seeing each other every couple of weeks, and I suppose he hadn’t thought about when I’d next be there.

And then I left.