It smacks of that 1950s -70s war movie genre with real ships replaced by impressive models and the battles full of heroes, gallantry, bravery, and honour.

At the opening of the film, we're introduced to Wolmi island, a small islet near the strategically important city of Incheon, today part of South Korea. The film is set in 1950 during the Korean War as the Korean People's Army (the North Koreans) have successfully pushed the US military to the south-easternmost corner of the peninsula.

With the enemy isolated at the city of Busan, the small naval platoon stationed at Wolmi-do have little to worry about.

In the opening sequence, we learn the company commander is soon to leave having been offered a position at the battalion staff, and so the company chef and a few soldiers are planning a special farewell meal.

It's not long after this sequence that the company captures two miners who claim to have had a run-in with enemy forces. One of the miners informs the company commander that danger is approaching and General MacArthur of the US military is planning to storm the beaches at Incheon to establish a bridgehead and cut off the frontline from its supplies.

With this new information, the company commander decides to stay and fight since an attack on Incheon would be impossible without first eliminating the artillery positions on Wolmi island.

Almost immediately, US planes are spotted and the island undergoes the first of many aerial bombardments. 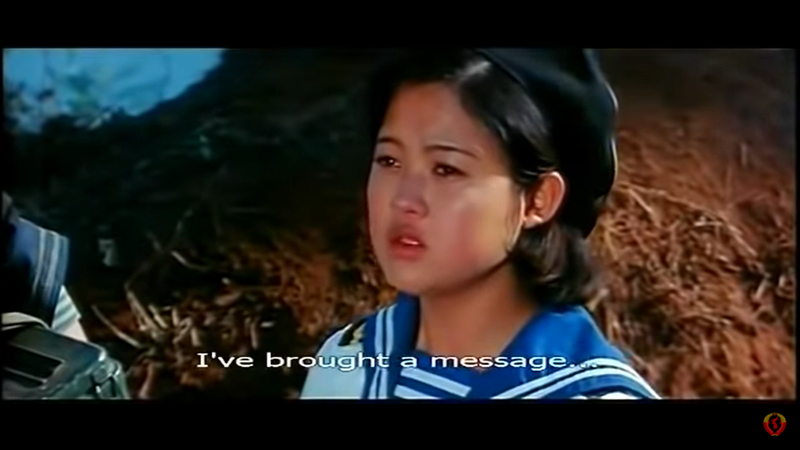 Hearing a commotion outside his dugout, the company commander emerges to find a 17 year old female soldier has arrived. Her name is Pak Yong Ok and she's come to serve as a radio operator.

She also brings a message to the company from headquarters – they must hold the island for three days against the 50,000-strong US imperialist forces – surely, an impossible task.

Yong Ok spends the rest of the day meeting with the soldiers and singing a beautiful song from her hometown. One of the most distinctive characters she meets is Jang Sop, the company chef. He tells her he has a daughter, Yong Hui, who sings just like her; through their conversation, they form a close fatherly bond, egged on by Jang Sop bringing her soup made specially, since she said she liked it.

Trouble is spotted on the horizon as the enemy fleet approaches Wolmi-do. Despite being a key position, Wolmi-do is lightly defended and supplies are stretched thin. For this reason, the company commander cannot call reinforcements and instead dispatches his men to their positions.

The island is defended by only four artillery guns, each with only about 20 shells. In this first battle, we see the strategic genius of the commander as he ignores the desperate calls of the artillerymen to order them to fire and waits for the ships to come within range.

He repeats the same line to each gunner; "조금 더", "A little more…" before commanding them to open fire, sinking two enemy ships and damaging a further six before the enemy turn back and flee. Despite this success, the island has suffered many casualties; we later learn that half the company was wiped out in the attack, including the chef, Jang Sop, fishing down by the coast when the bombardment began. On his deathbed, he asks Yong Ok to visit his hometown and pass on his final words to his family.

The company all stand together on the coastline to mourn the loss of their comrades – but the struggle has only just begun. 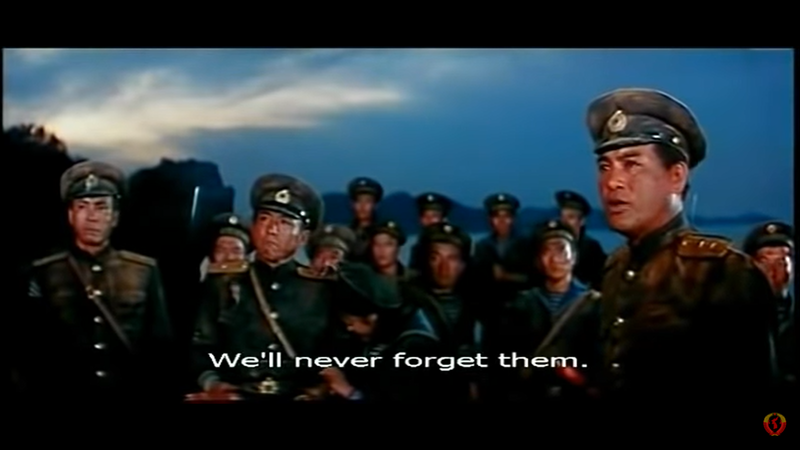 The Calm Before the Storm

With the first battle over, Company Commander Thae Un meets with his superior, who tells him they must hold out for another two days, but that future battles may be even more costly. Every day they hold the line saves the lives of KPA soldiers making a tactical retreat from the frontline.

At the hospital behind the lines, one of the injured troops meets a nurse who introduces herself as an old classmate of Commander Thae from medical university. She enquires about how he thinks of her, concerned that their turbulent past has resulted in a salty relationship. However, the soldier replies that he has no ill feelings towards her; when she asks if he was wounded in the attack, he replies, "Pure gold doesn't burn, even in flames".

That night, Yong Ok is walking by the coast when a covert enemy soldier jumps on her; she wrestles from his grip and shoots him, soon joined by other troops who kill the remainder of the enemy soldiers, bar one, who is brought in for questioning.

Under interrogation, he reveals himself to be from the US marine corps, on a mission to discover why the US attack failed when only a handful of soldiers were said to be guarding the island. He reveals a major attack is coming tomorrow and advises them to surrender. They refuse. 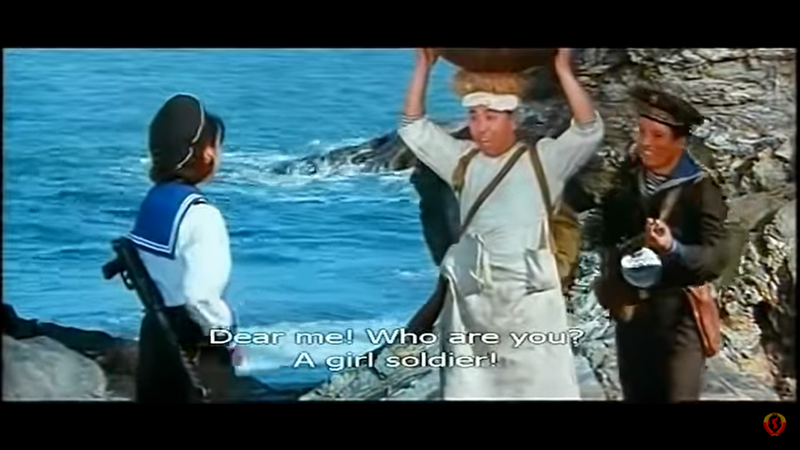 The following day is September 14th, and Yong Ok goes to see Commander Thae, who tells her to leave the island. Distraught by this order, she discusses it with a fellow soldier who tells her not to think ill of him and that the commander doesn't hate her; in fact, he's sorry to part with her, likely because the defence of the island is becoming a suicide mission.

However, as the bombardment begins, she disobeys the order, returning to the front. Upon arrival, she finds Commander Thae cannot communicate with Gun No. 4 due to the destruction of the phone lines; so, she heads out herself, dodging bullets, bombs, and shell fire.

The phone line suddenly comes back online, allowing just enough time to alert Gun No.4 that a destroyed is approaching from an unexpected direction. This warning will enable them to turn their gun and destroy the ship.

As the dust settles from the devastating attack, many soldiers remark on having seen Yong Ok during the battle – as they search for her, they make a heartbreaking discovery. They find her dead on the beach, clutching the two ends of the broken phone line. She gave her life to repel the US attack.

With supplies running out, supply lines cut and the enemy approaching, Commander Thae seems to be flagging – his internal monologue shows that he's trying to stay strong for the morale of the few soldiers that remain.

He suggests they all write letters to boost morale, speaking of their love for the motherland. At this point, they only have one gun remaining with 16 shells. Thae plans to move the gun out to the open and operate it in pairs for the final day of battle; when two men on the gun are killed, another two replace them and so on. The plan is to ensure they can hold the island for another 24 hours at the cost of their lives.

As the final battle begins, one soldier volunteers, to swim out to a destroyer with a sea mine in a suicide attack against the fleet. During his mission, the remaining troops cover him with artillery fire.

Watching the heroics of the Korean People's Army, the captured US soldier, writes in a letter to his fellow soldiers that they were wrong to brand the north as the invaders; in fact, it was the Americans who were the aggressors in the war.

He writes, "America can win a battle, but not a war".

Preparing for their last stand, Thae finds out about the girl from the hospital and is reassured that, even in death, there will be somebody who remembers him, somebody who cares. In their final hours, the soldiers joke that even if MacArthur boasts about his victory for 50 years, he was still well beaten up for 3 days.

In a letter to the General, Thae has written that they've defended the island for three days as ordered, but if no more gun reports come in from Wolmi island, they should bombard it with artillery.

The film closes on Commander Thae, grenades in hand, facing off against the enemy as American tanks roll onto the beaches of Wolmi island.

compared to my recent list of movie reviews, this movie ranks quite highly as it is more my cup of tea (war and action). Like any war movie anywhere in the world, the North Koreans tell the tale of their soldiers trapped in the heat of battle. The film has highs and lows and doesn't scrimp when it comes to the action.

After watching, I felt for the characters, and as a movie should it kept me occupied for the full 1hr 30 mins. I was even more impressed by the set design; all recreated with the flair of a North Korean oil painting with fantastic attention to detail.

For years many of my Korean colleagues had asked if I had watched the movie Wolmi-do, now I can say yes, and I actually thought it was a well-made entertaining movie.