A license to print museums!

Location: 25 Xinghua Road, Daxing District. Nearest Subway Station is Qingyuanlu, Exit A is right next to the museum) 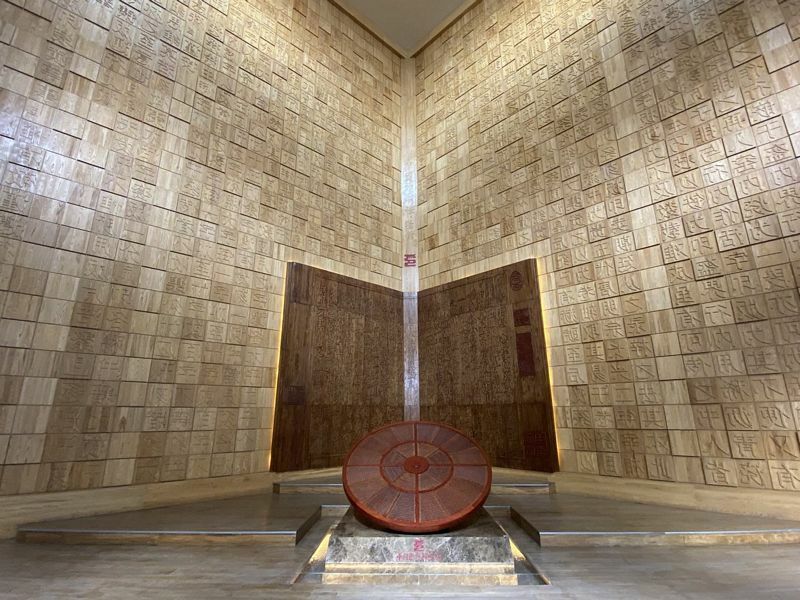 China Printing Museum is somewhat out of the way for anyone visiting from the centre of the city, way down into Daxing District but with a very handy subway station directly outside of the building, this place might not seem immediately attractive to the casual visitor, but I had an experience that ranged from initially finding it quite interesting, then confusing, then boring and dogmatic, and finally absolutely amazing and very much worth the trip to the point of being able to actually recommend it to our dear readers!

The entrance hall welcomes the visitor with a rather nice wall mural made up of stylised Chinese character printing blocks and, what I was later to learn is, a table used by typesetters. Here, the tour through the three-storey building begins.

The first floor is all about the history of all kinds of printing in China, so we go through attractive displays of the development of Chinese characters, early methods of displaying them (on bamboo strips, in bowls, on oracle bones, and so on) then the development of paper in various forms, of woodblock printing, or wooden and metal type, and so on. Basically, a fifteen-minute tour from the genesis of a written language to the point where it can be simply and cheaply disseminated to all that are literate in it. The display is translated in some key parts, pretty clear anyway, and is livened up by some fun statues and models of people making paper, typesetting, and so on. At first, I thought this was actually the whole museum but then was directed upstairs for more. 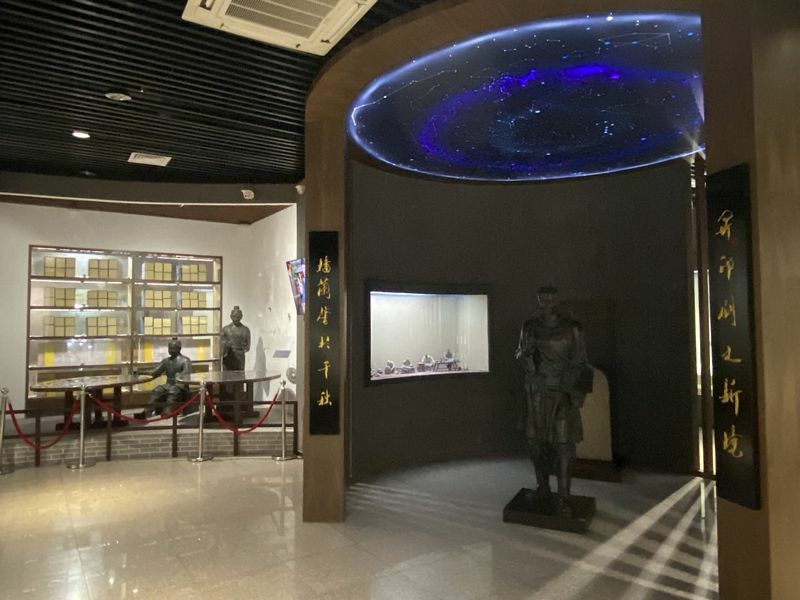 On the second-floor translations more or less disappear, and it also becomes unclear which way I am supposed to be navigating the displays at all – quite quickly I find myself in a room with a display of the five paramount leaders of China (collect them all!) which is usually to be found at the end of a trip around a Beijing museum, but this just seems thrust into the middle here and somewhat context-free, other than a board showing that (just like everyone else) these chaps also consumed printed material such as newspapers and books.

Then there are some sections devoted to ‘Red Printing’ – basically pumping out material during the civil war and anti-Japanese period, Wang Xuan – inventor of some complex printing protocols in the late 20th Century, some printing presses behind glass so reflective it is impossible to take a decent photo, a bit about Gutenberg and his part in the history of putting words on paper, then some examples of 3D printers and printing. Not too bad, but not as educational or well-presented as the first-floor display. 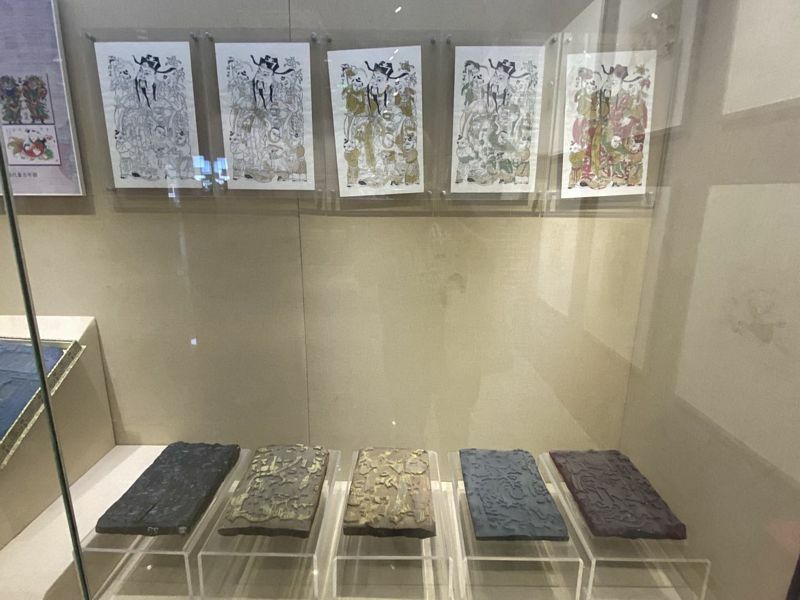 Heading out, I am instead directed up a dark stairwell to the third floor, where to my barely-suppressed joy I find a display about printing material somehow related to the 100th anniversary of the Communist Party of China. No translation is offered here at all, but there are some good examples of the various propaganda literature produced in the last century, the most interesting being that made in the very early days of the Party. At this point I start to wonder if there might be something here about Little Red Books, after all, they are the second most widely disseminated publication in world history, and all were printed in China – but I find absolutely zero of these in the China Printing Museum, instead, I blunder across a hall displaying the various translated versions of the book Governance of China by President Xi Jinping, yay.

Leaving here I accidentally find a whole other exhibit hall which has some interesting educational videos basically summarising the first floor all over again, why is this here and why are there no signs to it? It’s weird, and unnecessary as I paid attention already downstairs. Notably, the video screens in this room, and throughout the museum all seem to be working, something fairly unique in the dozens of museums visited on this project so far. Heading back down to the exit, and looking around the quite decent shop (t-shirts for 48RMB, interesting paper, models, and more. No magnets though), I notice a sign at the corner of the building for ‘Exhibition Hall 4’ so I decide to check it out. This leads down into a deep basement which turns out to be by far the very best thing about the China Printing Museum, and a reason alone to come and make a visit – a vast underground space filled literally to overflowing with dozens and dozens of printing machines, lathes, photo developing devices, and all kinds of industrial ephemera. The smell of oil is somewhat overpowering but speaks to the presence of machinery, industry, and history too.

The collection is a revelation – not really curated in any way at all, with everything somewhat just thrown in, and an overflowing upper deck area with even more machines just wedged into any available space. Each machine is labelled though with some decent information, including th year of manufacture, so we find a century of items all mixed up, not arranged by any theme, but all completely fascinating and compelling. 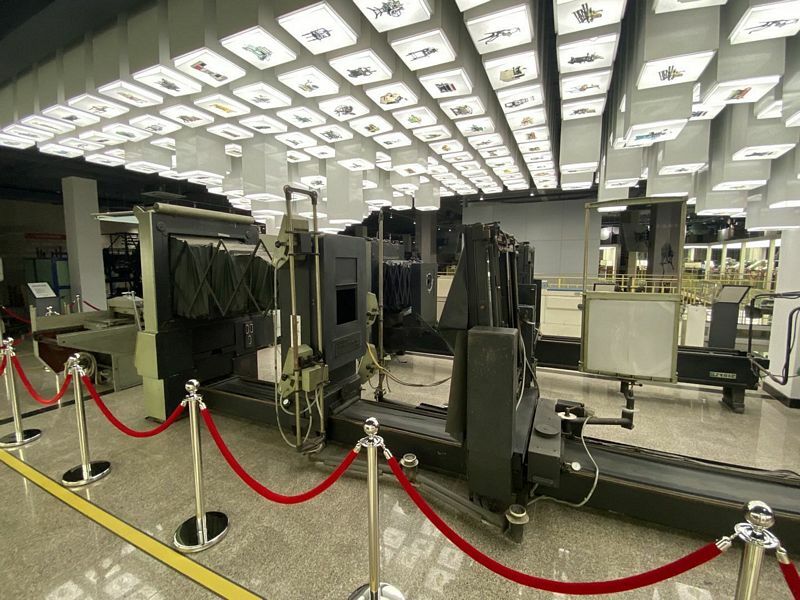 Some highlights for me included a very complex keyboard for typing Chinese characters in the analogue age, some several-metre-long cameras, and a colour film developing machine from 2001 that still seems to take up a colossal amount of space and makes you realise how far such technology has come in just the last twenty years.

I exaggerate not at all when I say that I would have come to the museum just for this very room, and at this point I consider the rest of it a bit of a bonus with this being the main attraction. Oddly I very nearly skipped it completely, and not one of the other dozen or so people I saw around the main museum seemed to come down into this basement in the half-hour I was there, so it seems that the highlight is the part that everyone seems ignorant of – if you find yourself visiting the China Printing Museum, then do not miss out on this hidden highlight!

One small additional complaint - despite this museum being devoted to the history and art of printing itself, there was no brochure or leaflet available for visitors to pick up. A pity as a short guide would be both handy, and appropriate at such a place for sure.