The Road From Pyongyang to Wonsan Part 1

The Road From Pyongyang to Wonsan:
Sights and Stopping Points En Route

As you continue east you enter North Hwanghae province, and it’s an increasingly bumpy ride as the road rises up into the mountains.

The scenery gets more spectacular whilst the road surface worsens until you see a sign in English for Sinphyong- a tranquil lake surrounded by mountain peaks and a welcome spot to stretch out and rest.

There are basic facilities here including a shop and retro restaurant on the 2nd floor with views over the lake and offering shots of potent local snake liquor.  For reasons unclear, the proprietors have recently invested in constructing a large swing by the lakeshore.

You can stay overnight, but few do as there are only a handful of rooms- most push on over the mountains and down to Wonsan.

If you do decide to stay here awhile, it’s worth enquiring about a hike in the optimistically branded Sinphyong Kumgang.

This is best seen if you are either heading east towards Kumgangsan, (whereby it serves as an hors d'oeuvre to whet the appetite for the real thing) or if you won’t have time to get there and have to settle for a small taster instead.

They don’t get too many visitors here, and so if you arrive unannounced expect a short delay whilst a flurry of phone calls and meetings take place as the staff try to establish the procedure and entry fee for actually letting you into the place. After Sinphyong, you continue to climb for another half hour or so and pass through several tunnels before you reach the crest of the mountains and a small pagoda on the edge of the road is a nice spot to take in the mountain vista and to let the engine cool awhile.

A view down to the valley floor reveals a mysterious VIP mansion and adjoining lake far below.

Another one which is not technically on the highway, but this is a beautiful stop 10km off the main road which is well worth a couple of hours diversion if you have the time.

A winding path from the car park takes you past a café and picnic spots which are often full of Koreans picnicking and relaxing, before it opens out to a glorious 70m high waterfall inscribed with Korean and Chinese lettering.

Ullim means ‘echo’ and you may find people testing this out whilst paddling in the water.

Over the border into the divided province of Kangwon, Masikryong (‘horse head’) ski resort is the last major point to stop at before you get to Wonsan city.

The facility was opened in 2013 under the direction of the country’s new young leader Kim Jong Un, who having gone to school, in Switzerland would have been very familiar with ski slopes around him.

A chairlift operates even through the summer months, taking you up to the 1363m Taehwa Peak where you take in a cocktail and admire the view.

Skiing or not, if you get a chance to stay at the 120-room Masikryong Hotel, you should- it’s the most luxurious in the country and you might (briefly forget) you are in North Korea. 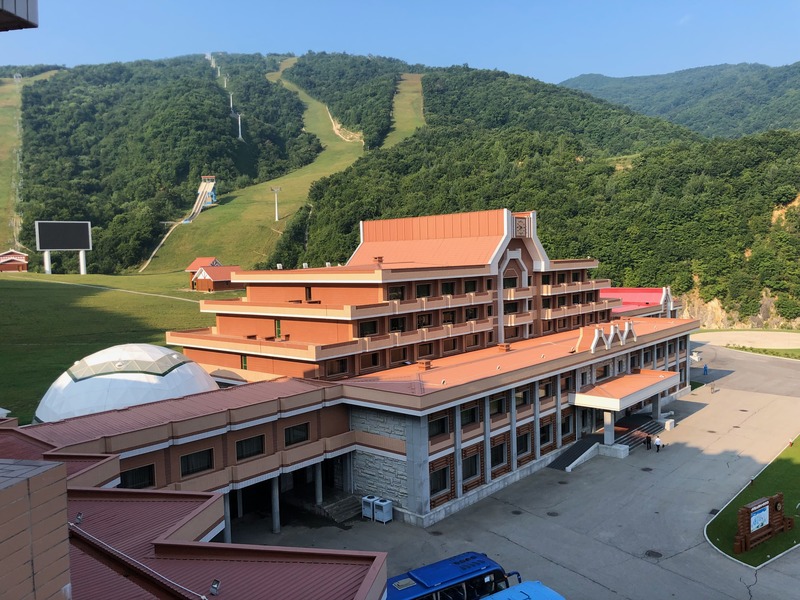 The Road From Pyongyang to Wonsan:
Entering Wonsan

After Masikryong, you pass immediately through the Mujigae Tunnel- at 4km the country’s longest.

10km further down the road, a checkpoint and toll booth indicate that the motorway is coming to an end, and as the road flattens out you roll into Wonsan city with the East Sea ahead of you.