Samjiyon Grand Monument is a massive area made up of several North Korea statues and sculptures in the far north of North Korea.

This North Korean statue is made up of a central bronze statue of Kim Il Sung in his 1930s uniform. He is flanked by relief sculptures of his guerilla army and their local partisans and supporters both surging into battle as well as providing support.

There is also a 50m high stone tower with a flowing Juche flame.

A huge square for rallies spreads out in this area, surrounded by woods on three sides and Lake Samji to the rear.

A genuinely astonishing piece of public art, sculpture, and propaganda.

One of the most significant yet least visited such spots in the whole of North Korea. The Samjiyon Grand Monument is a highlight of any visit to the Mt. Paektu region. 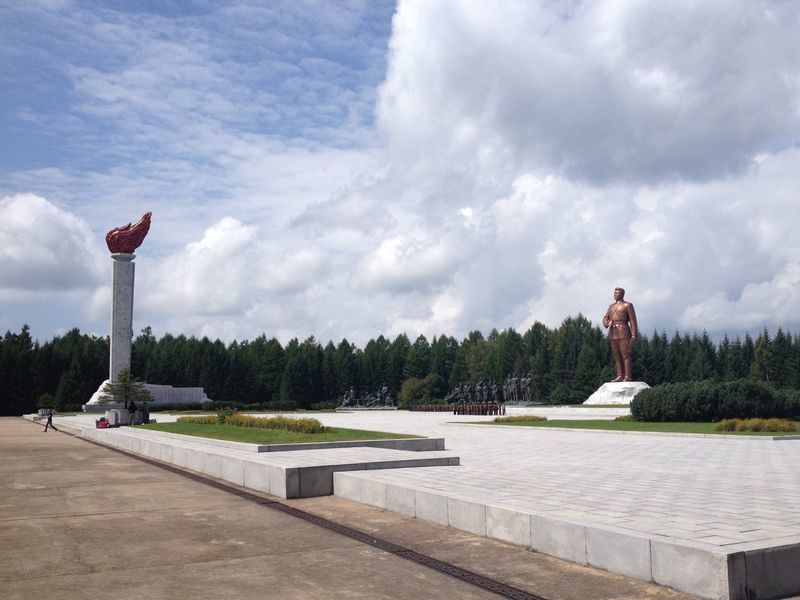 Samjiyon Grand Monument is just outside of the city of Samjiyon, in the far north of the DPRK and accessible to tourists only by flight to the small Samjiyon Airport.

From the Samjiyon Grand Monument itself, on a clear day, Mt. Paektu can be seen. This mountain, seen as the cradle of Korean civilisation as well as the revolution itself, sets the scene for the tale of why this monument is here and how it came to be.

While the journey here can be a bit gruelling it is very much worthwhile for fans of monumental socialist sculpture and statues in general. 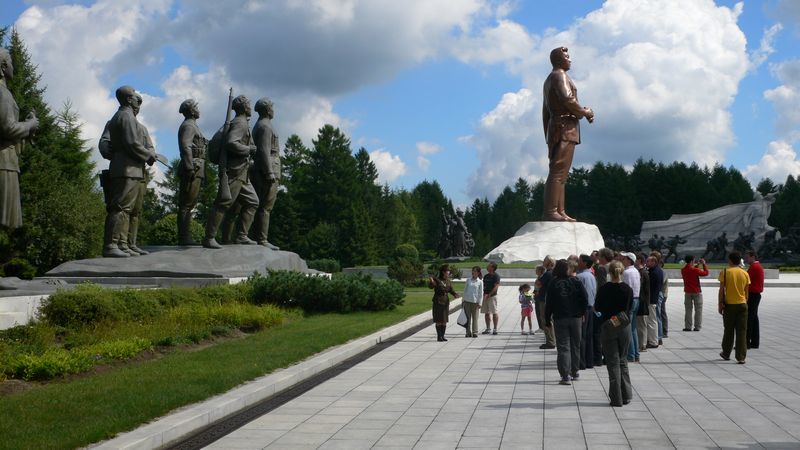 The Samjiyon Grand Monument complex itself (it is the collective name for the whole area, of 100,000 Square metres), was constructed by artists from the Mansudae Art Studio in Pyongyang. Some pieces were built in Pyongyang and transported to the far north, some were erected in situ.

In May 1979 the Samjiyon Grand Monument was completed and opened. Since that time it has been one of the most significant locations in this entire region and as a result, is kept clean and tidy by teams of workers passing through the area.

So don’t drop any litter here!

But why is the Samjiyon Grand Monument in this specific spot?

Well, it is a beautiful spot indeed. With the lake behind the monument reflecting the towering Mt. Paekdu itself in the right conditions. But the real reason is that this spot was where the guerilla army, led by Kim Il Sung and represented in the flanking sculptures (which are named ‘Advance’ ‘Camping’, ‘Reverence’ and ‘A Bugler of Advance’) rested here before their crucial assault on the Japanese Garrison at nearby Pochonbo.

The Battle of Pochonbo is considered to be the moment which the resistance movement against the Japanese stepped up a gear, became more militarized, and which led to the prominence of the finally-victorious guerilla army.

If you visit this spot, you will be told all the official historical narratives related to this struggle. Of course, it is interesting, but combined with the impressive setting of this titanic monument it makes for a truly evocative visit. 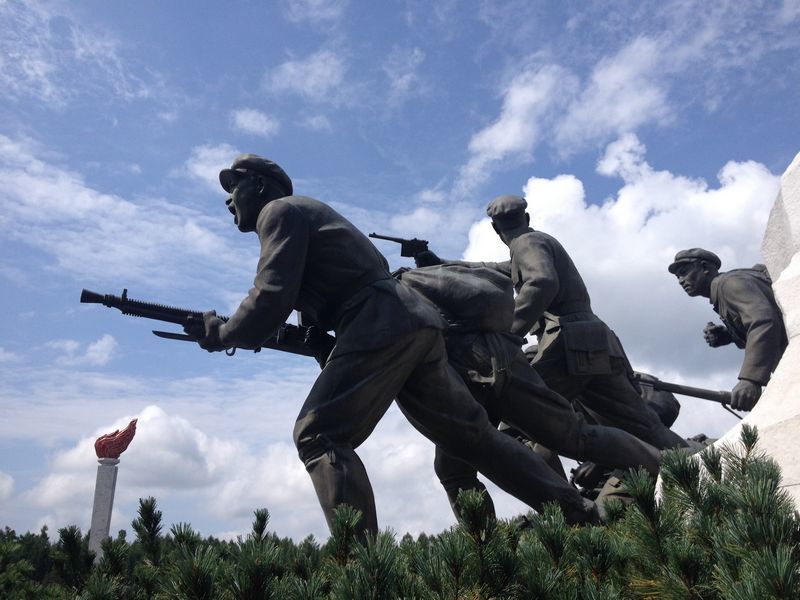 The logistics of visiting the Samjiyon Grand Monument are simple.

To get here, you need to take a flight from Pyongyang to Samjiyon Airport, either a charter or one of the semi-regular flights. Then a drive from there to the monument on the somewhat bumpy local roads.

Upon parking the whole of the Samjiyon Grand Monument complex comes into view, it is genuinely breathtaking in both scale and workmanship.

As with all statues including representations of one of the DPRK Leaders, it is customary to pay respects here so guides will ask tourists to line up and make a short bow.

Then a local guide (usually dressed in a reproduction uniform from the era) will take everyone around the site, pointing out each part of the monument, explaining the stories and so on.

While it is easy to focus on the massive sculptures and the looming torch tower don’t miss some of the more human-scale parts of the Samjiyon Grand Monument – behind the tree line that separates the main group sculptures from the lake itself you can find some sculptures of Korean women and men situated in the lake itself.

They are dressed in uniform of course, but relaxing rather than advancing.

This is a particularly pretty setting with the right weather.

Spending an hour looking at statues may sound excessive but in the name of seeing the whole of the Samjiyon Grand Monument and getting some great photos, it is far from over the top.

So, make the most of this visit to one of the most impressive pieces of public art in North Korea, or anywhere! 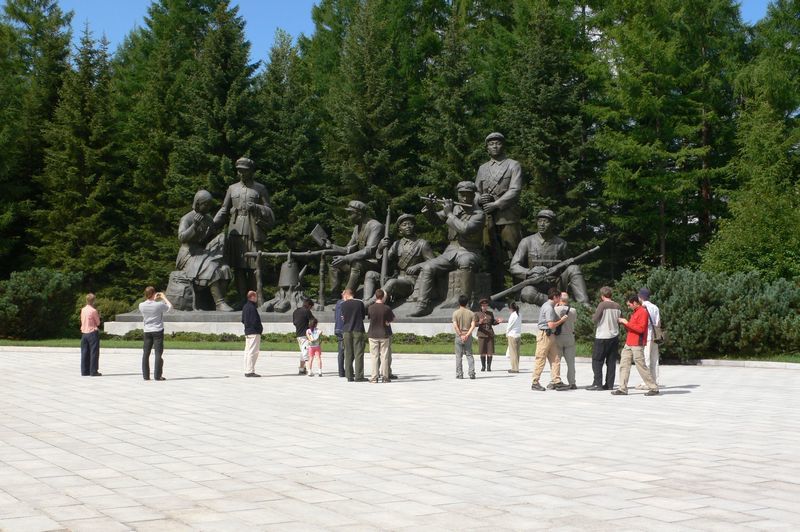 The most well-known would be the Mansudae Grand Monument in Pyongyang, but there is also this one in Samjiyon, and the even more remote Wangjaesan Grand Monument.

Try to collect them all!