Don't worry - not a movie about carpets. But it is set in North Korea's photogenic capital Pyongyang. And more importantly, it features the acrobatic marvel that is the mass games.

On The Green Carpet, a North Korean movie review. One that's not about carpets...

While I remain here in Mongolia, a country slowly transitioning into a harsh winter, I thought I would attempt movie review number two.

I have been leading tours into North Korea for around 13-14 years, not including the last two COVID-infested affairs. So for this week's classic piece of North Korean cinema, I choose the movie On The Green Carpet. I must be honest and say that I have rarely sat through a whole film during my time working in Korea. This classic piece of cinema was recommended to me by a friend as the actor who appears in the movie Hong Kil dong Ri Yong-ho also stars in this movie.

Released in 2001, On The Green Carpet is a romantic comedy following the trials and tribulations of Comrade O Mun Gyu, the Assistant Director of the Mass Games responsible for the children taking part.

Opposite Mun Gyu is Comrade Ra Hyon Hui; she joins the Mass Games production team as vice-leader at the film's start and is the romantic interest throughout the film.

The film's title refers to the green carpet laid out on the Rungrado May Day Stadium floor during the Mass Games.

Like many DPRK productions, On The Green Carpet keeps the romance at a low level throughout, so don't expect any scandalous sexy scenes; however, the film does focus on North Korea's societal pressures to find a partner and get married. For example, O Mun Gyu is hassled throughout by his sisters, frustrated at his lack of ambition in the romance department; he's always too focused on his work to bother with that.

We meet our protagonist, O Mun Gyu, as he boards a tram with his sister. She's hassling him about a girl he was looking at standing by the tram stop. She continues to complain about him being so single, especially since she's married and their other sister is engaged.

We then cut to the Mass Games production office where Ra Hyon Hui is being introduced to the production team members; we learn she performed in the Mass Games as a child and went on to join the National Team as a gymnast.

Synopsis Opening We meet our protagonist, O Mun Gyu, as he boards a tram with his sister. She's hassling him about a girl he was looking at standing by the tram stop. She continues to complain about him being so single, especially since she's married and their other sister is engaged. We then cut to the Mass Games production office where Ra Hyon Hui is being introduced to the production team members; we learn she performed in the Mass Games as a child and went on to join the National Team as a gymnast. O Mun Gyu isn't there to meet her as he's outside with the children preparing for practice. Despite being a bit of a hard taskmaster, he's loved by all the children and knows all of them by name, even asking questions about individual school exams and so forth. 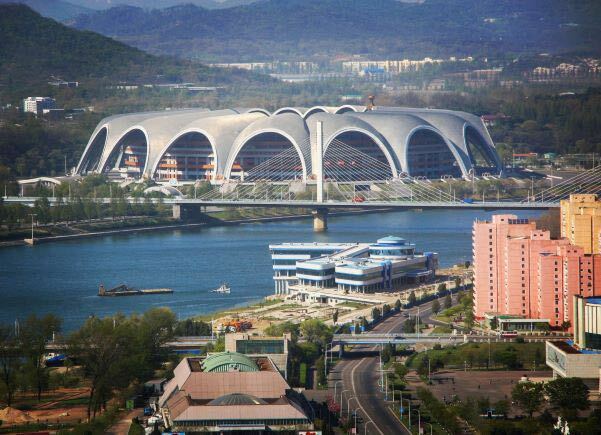 The film's central conflict is O Mun Gyu's determination to teach his children how to do a group forward pivot. A gymnastic move where rows of eight children link arms and somersault forwards.

Before even meeting Mun Gyu, Hyon Hui is adamant that the move is too risky.

"The children can handle the backward pivot […], but I'm not sure about the group forward pivot. Eight children have to do it together arm-in-arm" If one makes a mistake, the whole process can be disrupted".

It's here we flashback in time to the childhood of our two main characters. It turns out they were partners during the Mass Games, yet Mun Gyu turned up late, infuriating Hyon Hui. It seems this is the first time they've met since that day.

Back at home with his sisters, they continue to hassle him about getting a girlfriend. One of them notices a calendar from the Pyongyang Circus with a particularly beautiful acrobat on the front. Mun Gyu's sister decides he must have a crush on her and so decides to arrange a meeting.

The next day, he's taken to the circus and introduced to the acrobat. Despite his sister's efforts, all Mun Gyu wants to talk about is the technicality of the group forward pivot, hoping to get some advice from the expert. However, his sister keeps pushing and ends up scaring the acrobat away; she clearly thinks he's a crazed fan who's completely in love with her.

The next day, Hyon Hui enquires about the date, and Mun Gyu suggests it wasn't a date at all.

Tension is clearly building between the two central characters. Mun Gyu is adamant that, with enough work, his kids will be capable of performing the pivot. Hyon Hui is adamant of quite the opposite.

The solution? Offer Mun Gyu a promotion. Rather than being the vice-director of the Children's Chapter, he's offered the directorship of a different performance group; the Girl's Tabor Chapter.

Since it's been agreed by HQ, Mun Gyu heads to the Kim Il Sung Stadium to inform his children; but they've already heard the rumours and are distraught at the news.

So, he runs off to nearby Moranbong Park to think. While sitting by a tree, he hears the children in the stadium singing into a loudspeaker;

So, he runs back to the stadium, arriving to sing his own short line;

Which prompts the children to rush over to him, cheering. He turns down the promotion, choosing instead to work with the children. 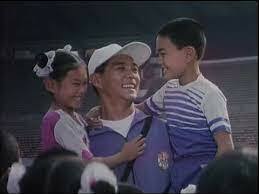 With practice continuing, the children are still not up to scratch. Mun Gyu is reintroduced to the acrobat, Yang Sil, although this time she's a bit more accommodating since she knows why he's there. He convinces her to help him train the children in acrobatics, and they finally begin to improve.

Hyon Hui then learns from her boss that on the day Mun Gyu was late all those years ago, his mother had died. Yet, he still showed up to support his partner. For the first time, Hyon Hui views Mun Gyu in a new light.

Asking where he is now, her boss tells her he's at the bedside of one of his children, Kum Dong, who's been taken ill. Whilst the management suggest replacing him, Mun Gyu is adamant that he mustn't miss the performance.

In the lead up to the opening night, Hyon Hui seems increasingly impressed by Mun Gyu, especially as the children's acrobatics improve.

The group forward pivot comes up at a production meeting. At first, Hyon Hui says that eight children pivoting together are a terrible idea; naturally, Mun Gyu objects since the children are getting better by the day. However, Hyon Hui pauses… and then suggests increasing the number of children per line to sixteen since she trusts their coach.

The night before the performance, Hyon Hui bumps into Mun Gyu and Yang Sil, the acrobat. She says to Hyon Hui that she'd like to invite her to their wedding… naturally, Hyon Hui is taken aback and slightly upset since she's developing strong feelings for Mun Gyu.

Yang Sil hands her two invites; one for her and one for Mun Gyu, since it isn't him she's marrying! Yang Sil suggests they come as a pair, and Hyon Hui gets so nervous and awkward she drops the tickets. Mun Gyu finally realises she likes him too.

The first performance is a great success. The groups of children pivoting around a central point are said to be reminiscent of planets orbiting the sun, although in this case, the sun is the Dear Leader and the entire display is an excellent symbol of Single-Hearted Unity.

The film ends with Hyon Hui reporting to Mun Gyu that the General referred to the performance as a masterpiece leading Mun Gyu to dance in celebration with his children! 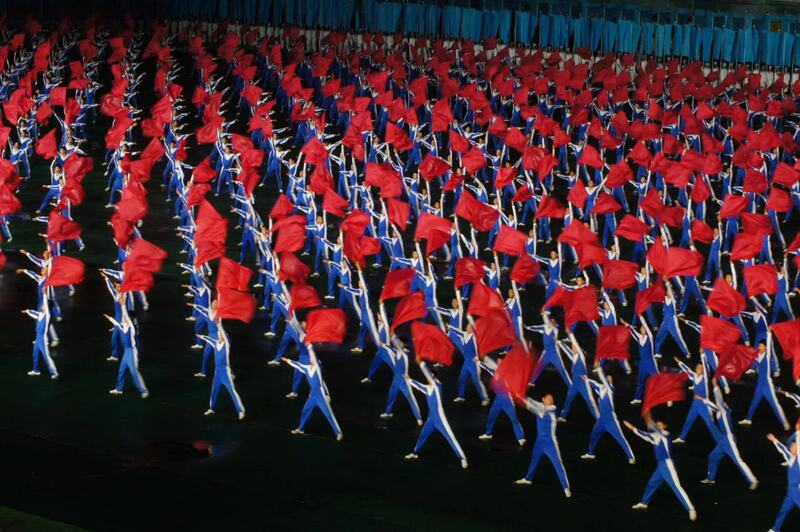 The film is centred around the Mass Games, a series of mass gymnastic displays that have been performed in North Korea for decades. Such performances used to be common in the communist world, although today, only North Korea continues the practice.

These days the games are usually held over the summer in the May Day stadium, the largest stadium in the world. Prior to its construction, however, they were held in the smaller Kim Il Sung stadium.

Children are indeed an essential part of the Mass Games performances – not only the incredible gymnastic displays on the "Green Carpet", but the backdrop to the concert is made up of thousands of children holding coloured cards to create an enormous image. At the start of the performances, the backdrop displays the names of the school districts the children are from.

As with many symbolic displays from communist and socialist countries, the Mass Games is a way to represent the collective power of the people – or, as the Koreans call it, the power of Single Hearted Unity.

I have to be honest and say for me personally, it wasn't the most riveting of movies I have seen. However, I was immediately interesting to watch as the street scenes of Pyongyang transported me back there. After only a few minutes, I was further interested as the movie centres around the mass games of which I have been lucky enough to see many times since my first visit many years ago.

Although the movie, along with much of North Korea's cinema, contains a large amount of propaganda content, the scenes and excerpts of life in which the dialogue takes place are all quite genuine. bands playing encouraging people to work, kids practicing gymnastics in large open squares and even the large communal picnics in the park.

On the green carpet is certainly not a movie for everyone, but if you've been to North Korea, have a passing interest in life there or are interested in visiting one day, it may just keep you entertained for 81 minutes.