The Tomb of King Tongmyong is a set of tombs located just an hour outside of Pyongyang.

The tombs here are a UNESCO recognised site and date back to the early times of Korea. 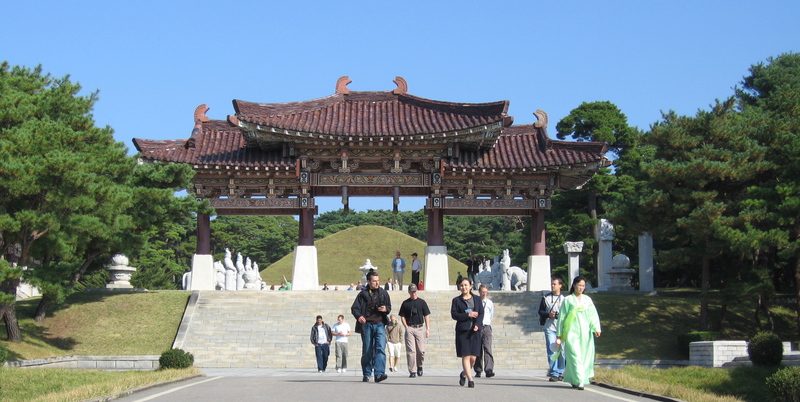 A little over two thousand years ago Korea was composed of three kingdoms; Koguryo (Romanised in South Korea as Goguryeo), Silla (AKA Shilla), and Paekche, the founder of Koguryo was Tongmyong (Romanised alternatively as Dongmyeong, this does get confusing, socially as he went by about a dozen other names. Luckily this is a travel guide rather than a comprehensive history piece!).

Koguryo was a very durable state, it lasted more than 700 years until the year 688 and featured 28 emperors in all. If you know anyone with the surname Go (not uncommon in Korea) then they may well claim descent from this dynasty as this was the family name of Tongmyong and his clan.

Like all good kings, Tongmyong claims descent from a god, so for anyone disputing his claim to the throne that is something worth considering. He ruled from 37BC until his death in 19BC, a mere 39 years old but was destined to live on in the historical and popular imagination as he was deified posthumously and remains the subject of worship, notably in the temple associated with him and located at this place, the site of his royal tomb complex.

In historical representations and paintings in North Korea Tongmyong is instantly identifiable by his twin feathered headdress, feathers rising from his temples into the air. Whether this is an accurate portrayal of something he wore on his head on a daily basis or just a fashion experiment he tried once and then became forever associated with is unclear, but if you see a painting, drawing, or cartoon, or a bearded and important looking man with two feathers on his head then this is always King Tongmyong.

In 2010 a major cartoon series was released in the DPRK about Tongmyong, it is still regularly rebroadcast and is considered one of the highest quality cartoon released from the SEK Animation studio in Pyongyang. Naturally, it lionises the king and portrays him as leading resistance to attempts at foreign aggression and invasion so as to show him as a Korean patriot and unifying force.

The tomb site itself is only around half an hour from Pyongyang by car, along the Pyongyang-Wonsan Highway to the east.

A good way to visit would be while on the way to the east coast (the city of Wonsan, Mt. Kumgang area, etc). It takes around an hour to visit the site usually.

The complex of tombs is very large and on a clear day shows a very beautiful setting. This area has been left to nature for many years, graves and tombs had been robbed, and it had been generally forgotten. In the 1970's it is said that Kim Il Sung ordered the location to be rediscovered and renovated. UNESCO recognises this place due to the cultural value of the tomb paintings (you can see reproductions of these here and in various museums) but there is a dispute over whether this is indeed Tongmyong’s tomb or that of other dignitaries of the Koguryo era (this dispute is outside of the DPRK, not inside)

Tongmyong’s mausoleum itself is a squat 11.5m high structure made up of a base of large stone blocks and covered with the traditional dome. There are also various other lesser tombs nearby (family, advisors, etc) as well as a monastery and temple which also function as a museum to tell visitors some crucial moments in the history of Tongmyong and the founding days of the Koguryo state and dynasty. A white stone stela with the inscription ‘Tomb of King Tongmyong’ written in the calligraphy of Kim Il Sung (but in Chinese characters, as this was what would have been used at the time of Tongmyong) is also on site.

Interesting mostly for historians and those with a fascination with the deep past fo Korea, as well as useful to remind tourists that there was a Korea (in fact many) before there was a North Korea and so not everything here has to be revolutionary. A pleasant place too, and a worthwhile stop for anyone heading east from Pyongyang.

Bonus Story!: in 2012, to much hilarity in the outside world, the DPRK State media reported the discovery of a Unicorn’s Lair in Pyongyang’s Moranbong Park. This was used to prove that Pyongyang was one of the capitals of the Koguryo Dynasty as King Tongmyong was said to have ridden this beast. As it happens it is not a unicorn at all, instead, it is a Kirin, a chimaera with the body of a deer, hooves and mane of a horse, and tail of a cow, plus two rather vicious looking horns.

Something only a divine king would be able to mount and ride really. Actually this isn’t quite as rofl, or even as lol as the internet would have us believe; this lair wasn’t really discovered as it was known about already, and it isn’t as if people actually believe in this animal either.

It is a mythical beast associated with legends in Korea.

It is doubtful that North Koreans fall about laughing when they hear about Welsh dragons or when they see that the front of the UK passport has an actual Unicorn on it, after all, so let's be a bit charitable and not assume everyone is completely credulous all the time!