The Korean DMZ, or Demilitarised Zone, was established in the aftermath of the Korean War (1950-1953).

It stretches for 250 kilometres (160 miles) across the width of the Korean peninsula between the Mt Kumgang region in the east and the mouth of the Imjin and Han rivers in the west.

The DMZ line is similar in location to the original border drawn between the two countries in 1945 after liberation from Japan.

This first border was drawn along the 38th parallel.

The only major shift in territory during the war was the city of Kaesong which was liberated from southern control by the northern side and is now North Korea’s southernmost city.

In 1953, the Korean armistice was signed to end hostilities between the UN forces and the communist forces of North Korea and China.

Part of the agreement stipulated that both sides should move their troops back 2 kilometres from the front line.

This created the 4-kilometre wide buffer zone at the DMZ.

Technically, the dividing line between the two countries is the Military Demarcation Line at the centre of the DMZ.

This line marks where the front line was at the time of the armistice.

As well as the overland border, a sea border was established, known as the Northern Limit Line.

The exact line is disputed due to a disagreement between the UN and North Korean sides over specific distances.

Panmunjom is located just north of the Military Demarcation Line in the DMZ. It is known as the ‘Truce Village’. Panmunjom is a section of the DMZ area.

Panmunjom was the site of peace negotiations which took place between 1951 and 1953.

Today, Panmunjom has become a museum for tourists visiting the nearby Joint Security Area (JSA).

The JSA at Panmunjom is the most famous point on the DMZ.

The distinctive blue conference buildings straddle the Military Demarcation Line and have been the site of numerous negotiations and diplomatic talks between North and South.

The JSA has grown extensively since the Korean War.

Both sides have established numerous guard-posts and other buildings within the area.

Until 1976, the JSA was patrolled by UN forces and North Korean forces, both spread equally around the whole area.

The ‘Axe Murder Incident’ saw a US military soldier attempt to cut down a contested tree which led to a fight during which he was killed with an axe.

The axe is on display in Panmunjom.

After this event, each side was restricted to their side of the Military Demarcation Line. 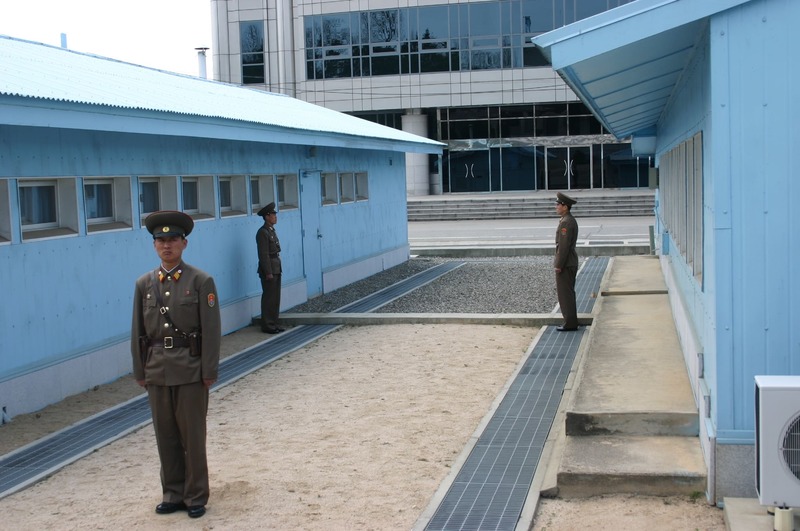 North of the Panmunjom JSA is a lookout, visitable by tourists, which sits atop a hill looking out over the DMZ.

This site is meant to highlight a large concrete wall which the South Korean military reportedly built across the entire peninsula.

This is seen to symbolise South Korea's wish to permanently divide the peninsula.

The wall is clearly visible through the military binoculars at the lookout.

How to visit the DMZ Panmunjom North Korea

Panmunjom and the DMZ is nearby the city of Kaesong in North Hwanghae Province.

Visitors can either travel direct from Pyongyang (2-3 hour drive) or stay overnight in Kaesong and travel from there.

Tourist buses first travel through a huge concrete arch into the car park.

This arch has the word ‘Reunification’ written in huge white letters above it. 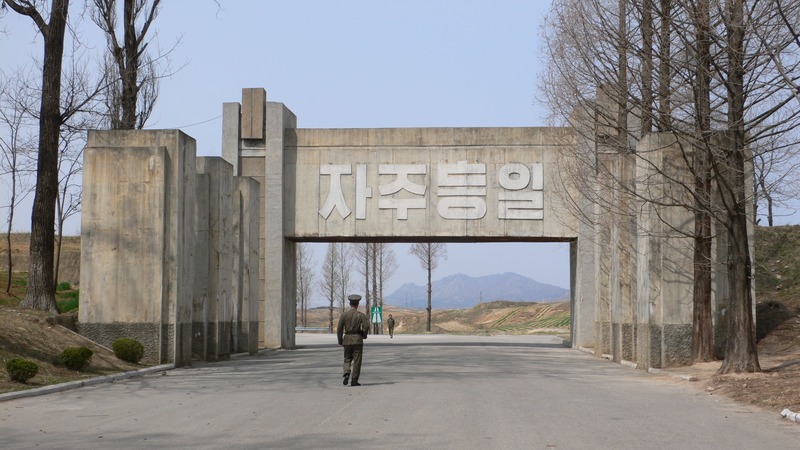 Once in the car park of the DMZ, visitors are welcome to browse the gift shop whilst military personnel carry out checks.

There is then a short explanation of the site and its history given by a Korean People’s Army guide.

Visitors then board their buses again and head through the first checkpoint down to Panmunjom.

A museum has been set up in the buildings once used by North Korean and UN officials to negotiate and sign the armistice agreement.

The original flags and agreement are under glass on a table in the centre of the room along with photos and artefacts from the time.

The tour then continues, by bus, towards the Panmunjom Joint Security Area.

On this drive, the North Korean flag is visible on the right-hand side flying atop one of the largest flagpoles in the world.

The flagpole was built in the border town of Kijong-dong, one of two towns allowed to exist inside the DMZ.

It was constructed to counter a large flagpole built on the southern side in Daesong-dong, the other town allowed to exist in the DMZ.

Once tourists arrive at the JSA, they are taken to the signature of Kim Il Sung; a huge marble monument with the President’s signature emblazoned on it.

It is reported that this is a copy of the signature he wrote on his final document before his death in 1994.

They are then taken to the Military Demarcation Line and may even get the opportunity to head into one of the blue conference buildings and step, technically, into South Korea.

Read more about what a visit to Panmunjom DMZ is like. 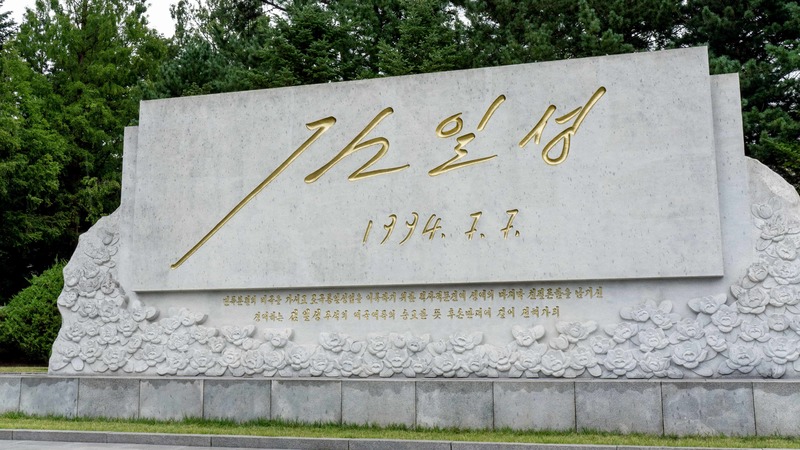