The Concrete Wall is well worth a look if you are in the Kaesong/DMZ region and have a few hours spare.

It's a great place to visit if you want to experience an aspect of the DMZ that few others do. 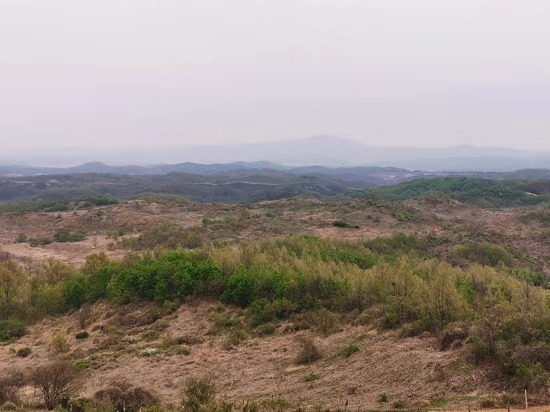 Leaving from Kaesong city, the road heads east on an increasingly bumpy road.

Whilst the highway from Pyongyang to Kaesong carries swarms of tourist buses every day, few venture down this way and you may attract curious looks from local children in Jonjae-ri and Sasi-ri, the two small settlements you pass along the way.

Getting to the Concrete Wall

The journey from Kaesong to the Concrete Wall takes about an hour, and some people use this time to have a nap, especially if it has been an early start from your hotel.

This is understandable, but if you can stay awake, do.

This is untouched rural North Korea, a world away from the glitz of Pyongyang, but it has a particular poignancy to it. It lies literally just over the hill is glitzy South Korea, with its K-pop, fashion, internet, and global reach.

This close to the border many of the local people living here will have relatives in the South, their villages divided by an arbitrary historical act more than seventy years ago.

The road gets narrower, and your bus may end up having to back up in the (unlikely) event of meeting anyone coming the other way.

As you wind up the hillside, eventually the bus can go no further and you have to continue on foot up a steep trench pathway leading to an active guard post where a Korean People’s Army officer will meet you to show you around. 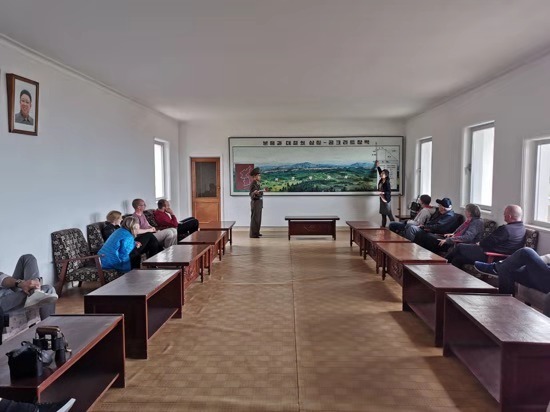 The officer will explain the North Korean point of view that a large wall standing between 5m and 8m high was built by South Koreans (aided and abetted of course by the United States) from 1977 until 1979 across the entire DMZ.

It’s existence- and we’ll return to this point shortly- is a sore point which plays into North Korean feelings of victimhood and South Korean disingenuity in reunification discussions. The Concrete Wall is seen as a physical manifestation of an underlying intent to permanently dividing the peninsula.

Having heard not just the history of the wall, but also useful stats about its size, height, thickness and observations about what a terrible waste of concrete it is, you move on to the viewing platform.

Here various binoculars are lined up and a valley floor opens up in front of you.

This, in all its rewilded overgrown wonder and tragedy, is the DMZ.

Tracks lead through heavily mined shrubland and rivers to lonely guard posts; your officer guide will indicate which are KPA positions and which belong to the South Koreans.

Looking further across the valley you will be invited to look through the binoculars at the wall itself. 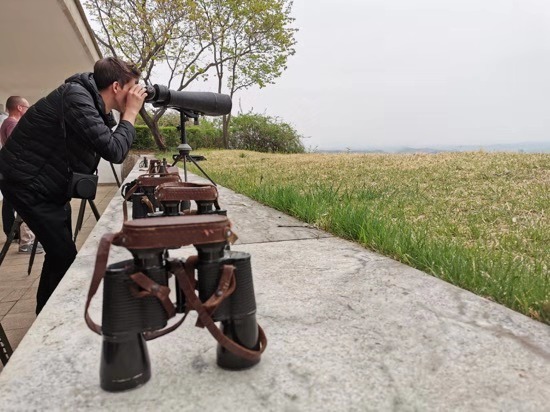 And this is where it all gets a bit surreal.

Despite a very clear direction as to where to look, and despite the availability of high powered binoculars to look at the wall, its very existence remains in question.

There are two main reasons for this.

The first is that South Korea denies that any such wall even exists. This may be in part due to semantic wrangling on the definition of a wall (as opposed to,say, an anti-tank fortification), and disputing the North Korean claim that it runs a full 240km along the DMZ (which in all fairness there is limited evidence for).

The second is that even with the aid of binoculars, many visitors are really just not quite sure of what they are looking for and whether what they have seen is indeed the fabled wall.

Wall, tank trap, or nothing, the thing itself is only part of the experience and value of coming here.

Much of the interest lies in seeing the DMZ from such a lonely outpost, and in looking across to South Korea.

You can see cars, busy highways, and maybe even make out signposts for restaurants and shops in the last town before the border; on a quiet day, you may even hear them.

Once you have had your fill, you head back down the hill through the trench to your bus. It’s an hour’s drive back to the highway and as you head back north into the farmland of the DPRK, and a chance to reflect on the sad division of this peninsula.