Liberation Day, apart from traditional holidays, is the only national holiday that is celebrated both in North Korea and South Korea.

Although it brought the end of Japanese colonial rule it also meant the start of decades-long and still existent national division.

When is Liberation Day?

Liberation day is celebrated both in the DPRK (North Korea) and the ROK (South Korea) on August 15th to commemorate the country’s liberation from Japanese colonial rule in 1945.

It became an official holiday in South Korea on October 10th, 1949.

Liberation Day in North Korea is referred to as Jogukhaebangui Nal (조국해방의 날; lit. Day of the Fatherland’s Liberation).

In the two Koreas, different words are used to refer to liberation.

In North Korea “해방” (haebang) which has a more revolutionary, emancipatory meaning, for example, the abolishment of serfdom is referred to as “농노해방” (nongnohaebang).

In older times, the emergency exit was also referred to as   “해방구” (haebanggu).

In South Korea, on the other hand, “광복” (kwangbok) is used that has a meaning of restoration, recovery (of independence).

What is Liberation Day?

The colonization process was complete by August 1910 with the Treaty of Annexation when Korea became a de jure colony of Japan.

Although during the 35-40 years of Japanese colonial rule there was a nationwide resistance movement in Korea and many Koreans fought in guerilla armies in Northeast China and/or in the Soviet Army against Japan, the Korean people were unable to break the rule of the Japanese Empire.

On August 6th, the Americans dropped the first atomic bomb in Japan on Hiroshima and the Soviet Army launched a military campaign in Manchukuo on August 9th, the same day the second bomb was dropped on Nagasaki.

On August 10th the allies agreed to divide the Korean Peninsula along the 38 parallel splitting it into a North-South with a Soviet and a US occupation zone, respectively.

On August 15th 1945 Emperor Hirohito announced the surrender of Japan to the Allied Forces, and as a result, the decades-long Japanese colonial rule has come to an end in Korea.

In the North Korean narrative, Korean independence was reached mainly through the exploits of President Kim Il Sung and his guerrilla army by the Korean people while the two emerging superpowers mainly helped in the disarmament of the Japanese troops stationed on the peninsula. How is Liberation Day Celebrated?

In North Korea, as all holidays of political significance, there are large-scale mass dances organized all over the country, people go on picnicking in public parks where meat roasts, soju flows, dancing and singing takes place (often with a help of portable karaoke machines).

In 1953, Liberation Day was celebrated by a military parade.

Military parades still take places but only on jubilee years.

Check out our blog on where to visit on Liberation Day.

In South Korea, among many other activities and patriotic ceremonies held nationwide, the President also delivers a speech.

National-level celebrations usually take place at the Independence Hall of Korea in Cheonan which is a museum commemorating the independence movements, or at the Sejong Center for the Performing Arts in Seoul.

The Republic of Korea was also proclaimed on August 15th in 1948.

However, National Foundation Day in South Korea is celebrated on October 3rd that commemorates the legendary foundation of the first Korean state in 2333 BCE (Dangun Era / 단기1), named Kojoseon (another Paekdu-story). 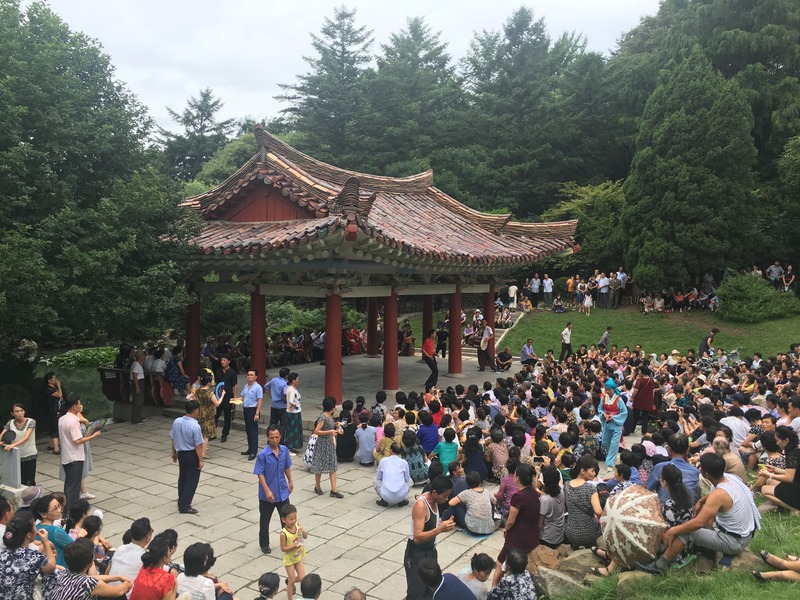