Changjin Lake is located in the north-west of South Hamgyong Province and is significant for two reasons.

Firstly, it is the source of the Taedong River which flows from the lake through South Pyongan province and through the capital city, Pyongyang, before eventually draining into the West Sea at Nampo. The lake was also the site of one of the most significant battles of the Korean War, known as the Battle of Chosin Reservoir.

The lake is, in actual fact, man-made and serves as a reservoir for the surrounding area.

The Taedong River drainage basin is actually spread over the entirety of the Rangrim mountains, although the stated source of the river is often Changjin Lake.

The river winds its way through small valleys as it snakes towards the capital.

From this point on, the river begins to widen out as the landscape turns from mountainous to level. The area surrounding the Taedong becomes suitable for agriculture from this point onwards, often using water from the river to irrigate crops.

The river then passes through the cities of Tokchon, where it serves the Sungni Motor Plant, a major centre for vehicle manufacturing, and Bukchang, the site of a large power plant and aluminium factory.

These factories also use water from the Taedong river to support their industry. Eventually, the Taedong reaches Pyongyang, passing through the centre of the city and becoming almost a landmark in itself.

The river passes some of the most significant sites in the city including the Juche Tower, Kim Il Sung Square, the Yanggakdo Hotel, and Mangyongdae District before leaving the city and flowing down to the port city of Nampo where it drains into the West Sea through the West Sea Barrage.

The river is significant both for symbolic and practical reasons. Whilst it may only be the 5th longest river in the country, the diversity of landscape it passes through means it not only serves to support the industrial and agricultural sector but has also become a symbol of Korea in and of itself. The Battle of Chosin Reservoir

The battle of Chosin Reservoir occurred between late November and early December 1950 – around a month after the Chinese People’s Volunteer Army joined the Korean War in support of the DPRK’s Korean People’s Army. The communist forces had been successful in pushing the UN forces back from the Amnok River.

On the night of the 27th of November, the Chinese forces ambushed various UN units surrounding the lake.

By strategically targeting roads and communication points, the communist forces ensured that by November 28th, the UN forces surrounding Changjin were unable to communicate with their commanders. 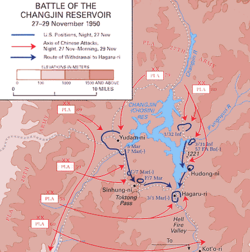 On the western side of the reservoir, UN forces dug in to defend against an onslaught of Chinese attacks. Eventually, the decision was made to withdraw from the area, heading south away from the lake. The withdraw was treacherous with the US forces being constantly harassed by enemy fire and ambushes by the PVLA, despite this, the withdrawal was completed by the 4th of December.

On the eastern flank, the US military’s RCT-31 known as ‘Task Force Faith’ was also forced to retreat.

On the 1st of December, the retreat began; immediately, however, they were overrun by Chinese forces who formed a roadblock to prevent the convoy from retreating. In a last-ditch effort to open the road, the US Air Force dropped napalm on the area, killing and injuring Chinese and US forces indiscriminately. The disorganised soldiers eventually passed the roadblock.

After a fierce fight with the Chinese troops to take a hill known as ‘Hill 1221, the soldiers, now without any commanders, continued out onto the frozen lake, abandoning the road.

Eventually, UN troops from the western and eastern flank regrouped at Hagaru-ri, south of the lake.

Out of the 2,500 men from the RCT-31 battlegroup, less than half survived and only 385 were deemed fit to carry on fighting.

Eventually, in early December, the UN forces broke out of Hagaru-ri and fled south to Hungnam, near the city of Hamhung, where the greatest evacuation movement by sea in US military history took place. 193 ships evacuated UN forces from the area as well as civilians. The battle and subsequent retreat ended any illusion of a total victory in Korea for the United Nations command.

The intention had been, in their view, to liberate and reunify the peninsula; after the battle at Changjin Lake, the UN strategy becomes focused on defending the front line at the 38th parallel where it remained, more or less, for the rest of the war. 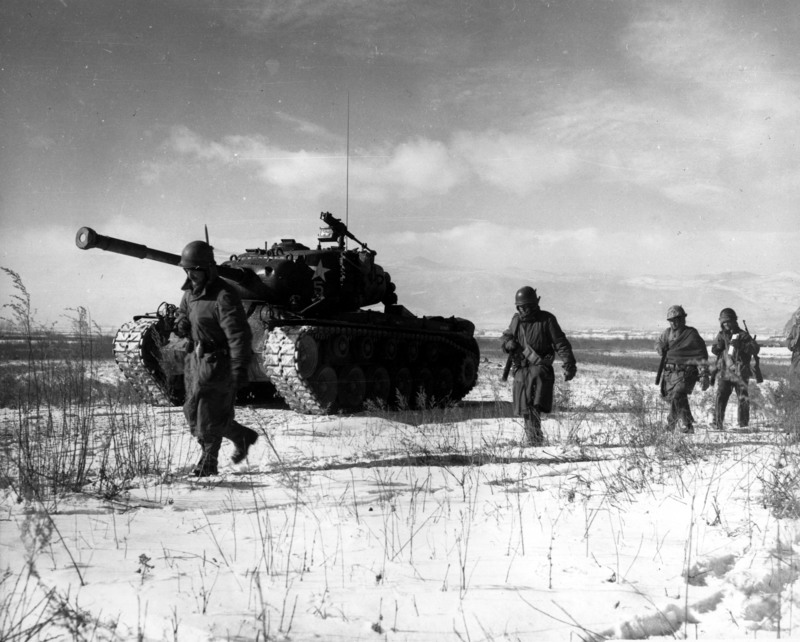