Mt. Kumgang, known in Korean as Kumgangsan, is one of Korea’s famed mountains and the one which many consider to be the most beautiful.

How beautiful is it? Well, Kumgang means ‘diamond’ in Korean thus making it Korea’s diamond mountain.

It is one of the most scenic places in all of Korea that truly lives up to its name and has been immortalised in countless Korean artworks, songs, and even has Taekwondo movies and cosmetics named after it. Chances are that the mountains in the paintings and pictures at your hotel in Pyongyang are of Mt Kumgang! It has even been recognised by UNESCO as a biosphere reserve.

It’s not a single peak though, rather it is a large mountain range featuring snowy peaks right through to seaside cliffs and with many stunning sceneries in between. The area has been divided into three areas based with there being Inner Kumgang (naekumgang), Outer Kumgang (oekumgang) and Sea Kumgang (haekumgang). 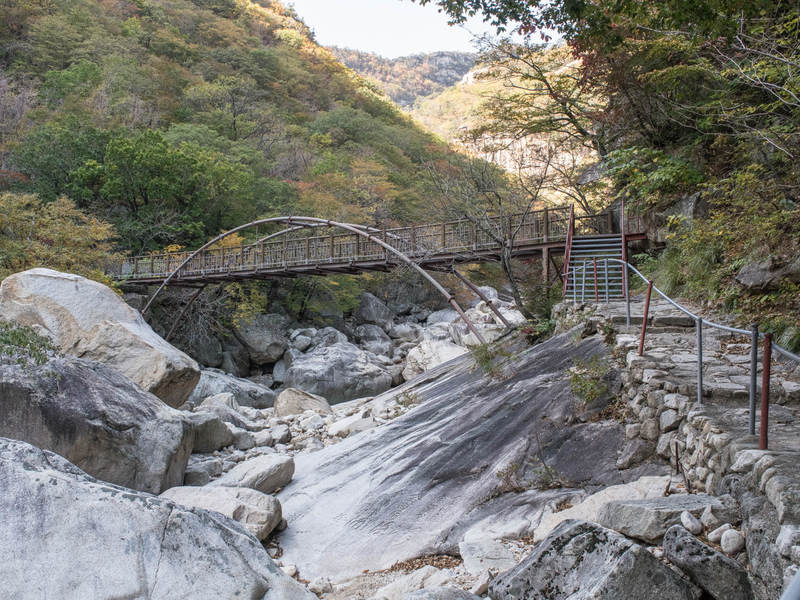 Mt Kumgang is located in the Southeast corner of North Korea on Korea’s beautiful east coast, just a short distance from the DMZ border with South Korea (which for the record can’t be visited in the north here).

It takes a full day of driving to get here from Pyongyang, but as you have to go via Wonsan you will generally have your trip to get here broken up into smaller bite-sized holiday adventures.

If looking to add this to a private tour you will need at least three days/two nights in your itinerary to accommodate it.

There are six hiking courses at Mt Kumgang, with the most popular being the hike to Kuryong (nine dragons) Waterfall. You’ll be driven to the start of the hike by your local Korean driver which for the Kuryong Waterfall course is about 10 minutes away from the Kumgangsan Hotel. 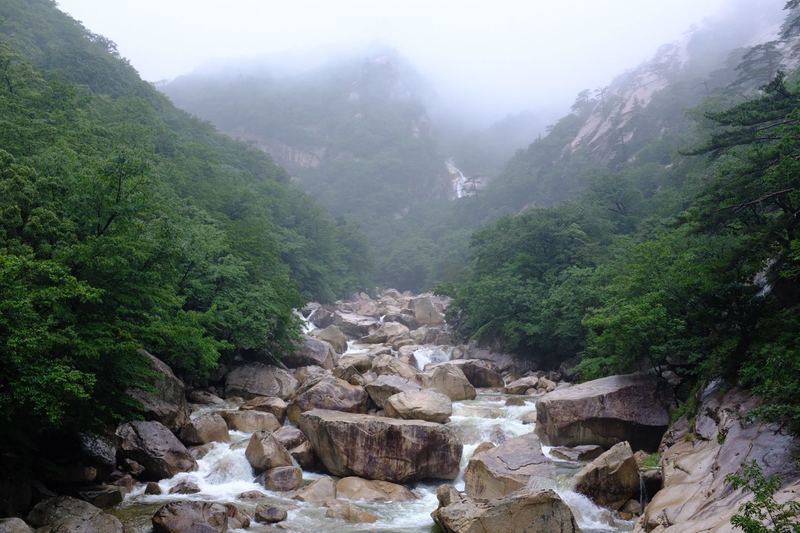 Hiking Kumgangsan is really great and well worth the trip if you have time on your tour. It is certainly one of the best in Korea!

Each season gives Mt Kumgang a unique character and it really is beautiful all year round, though winter makes it very difficult to do much hiking with the snow, ice and general cold.

The hiking courses here are excellent as they are really well set out and well equipped. While each trail has its own difficulty level, there is something for just about all skill and fitness levels.

The Kuryong Waterfall course is the most popular hike in the area as most can comfortably conquer it as it is mostly a quite flat course that follows the river up the valley to the waterfall. It takes about two hours from the car park to the waterfall (that is a 4-hour round trip), though many are able to complete it in less time. If time allows then you can extend your hike with the Sangpaldam course. 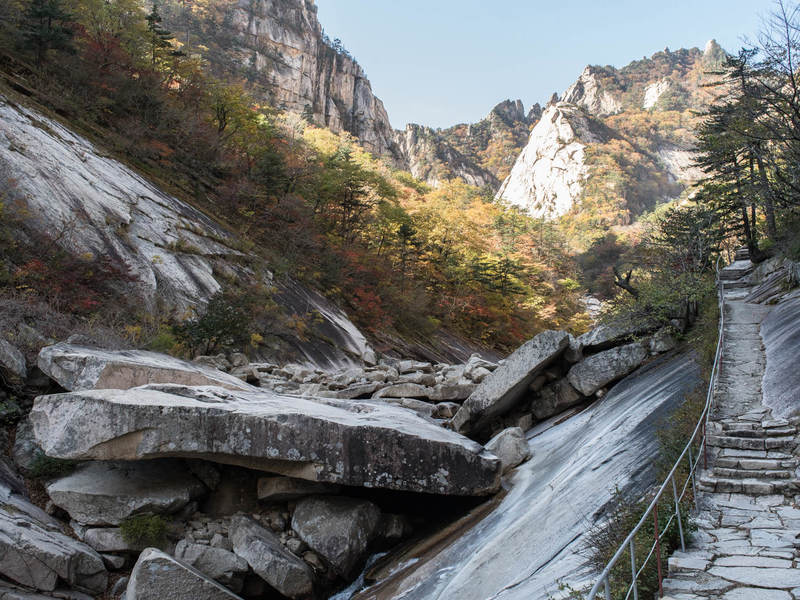 The Kuryong course has several highlights along the way including;

The falls have a pavilion which is the end of the course, and from where you can rest and enjoy the scenic view before returning.

There is a junction before reaching Kuryong Waterfall which is for the Sangpaldam trail course. This course is short but very steep and typically takes around 30-45 minutes to get to the top. It is a difficult course which is mostly climbing up steep stairs.

Sangpaldam course climbs up Goryongdae to its observatory which gives you a stunning view of the Mt Kumgang range, the eight ponds that feed water to Kuryong Waterfall and on clear days a view down the valley and out to the East Sea of Korea. It is well worth the effort!

Hikes on Mt Kumgang are usually accompanied by a local guide. They are all Kangwon Province natives and experts on the area, so do ensure to listen to them especially when it comes to safety and the weather. 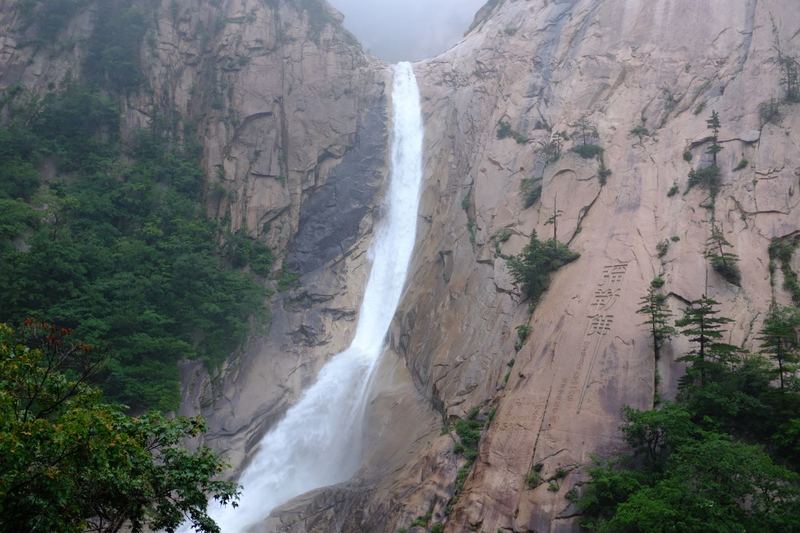 There is no cost to visit Mt Kumgang. 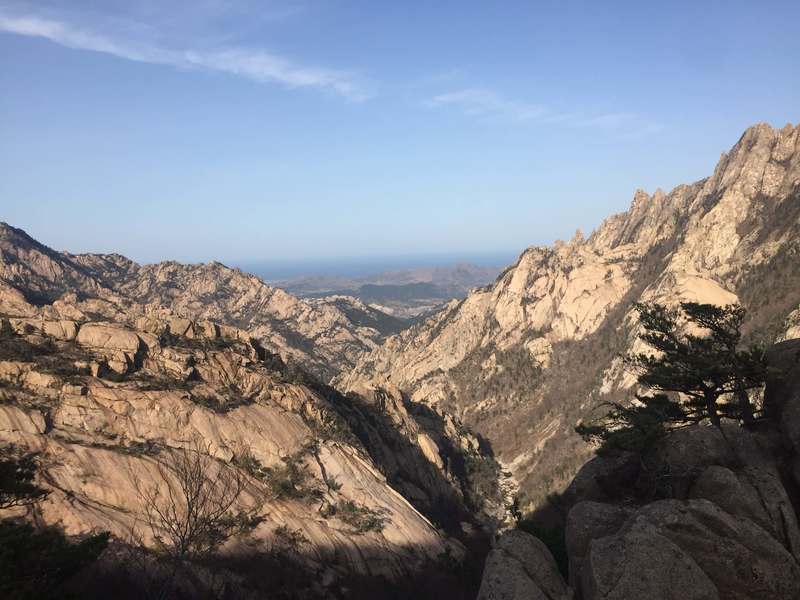