Pyongyang’s main river, the Taedonggang (‘gang’ means river) is one of the longest in Korea, it has many tributaries.

But in Pyongyang itself the main secondary channel is the Potonggang, the Potong River, which merges with the Taedong just to the south of the city (at a point looked over by the Ryanggang (‘two rivers’) Hotel.

The Potong River itself starts to the north of the city, just past the airport, at the Kyonryong Reservoir, and then winds it was way past the airport (the bridge any visitors drive over immediately upon leaving the airport goes over this river) and down to the city, where it is popular with rowers and fishermen (also it flows past the Victorious Fatherland Liberation War Museum, and is the current home of the spy ship USS Pueblo).

Since the Potong River is narrower and more manageable than the larger Taedonggang, it eventually merges into the larger channel opposite the large Turu Island. As with many other rivers in Korea, the Potonggang had a tendency to flood.

When waters washed down from the northern mountains, some of these floods could be disastrous and there was a great effect on the agriculture of the area, always a tenuous industry at best, and something that needed to be protected for sure, although a case can be made that regular flooding helped with irrigation and the fertility of the area on the river’s flood plain.

Almost immediately following liberation from Japan in 1945 a plan was made to turn the part of the river flowing through part of Pyongyang into essentially a canal; to control and regulate flow. This would be one of the very first prestige projects under the new independent government although the initial plans had been drawn up by the Japanese. Mass-mobilisation occurred and the workforce got stuck into the task at hand.

Starting on May 21st 1946 and completing the epic task a mere 55 days later on July 14th 1946 (in what must have been a frustrating moment a flood actually occurred again soon after this, however the river has been more passive and controlled since then).

Since that time all manner of mega-projects have been completed and are underway at the time of writing and of reading too no doubt, this being one of the first meant that it was seen as deserving of a special honour; to have a monument erected to mark the project.

Opened on the 25th anniversary of the start of the improvement project itself (so on 21st May 1971) the Monument to the Potong Rover Improvement Project is made up of a 13m high white tower backed by a granite block with an outline of the genesis of the project and a paean to the inspiration of Kim Il Sung in realising this undertaking.

A fairly standard DPRK monument of course but one with an interesting history and in a scenic setting (above the channelled river on a pretty hillside). 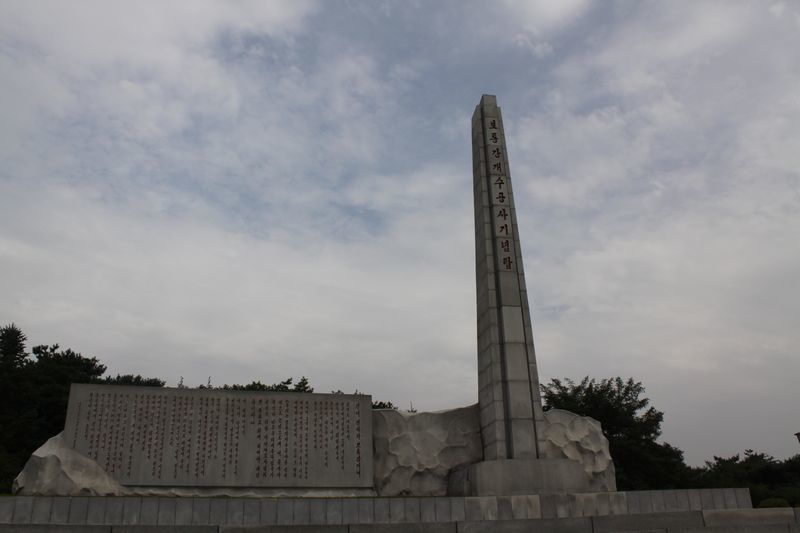 This monument is rarely visited but is worth a stop for anyone in this part of town, if visiting the Pyongyang Film Studios or the Pongsu Church (which can be seen just across the river from this site) then request a stop at the Monument to the Potong River Improvement Project for a bit of early DPRK history and a stop at a little-seen site.

If you enjoy it a great deal then you can check out one of the stamp shops in North Korea for any of the stamps issued (in 1971 and in 1998) showing Kim Il Sung’s visits to this area when planning and breaking ground on the Potong River Improvement Project.