From the Russia/North Korea border to Vladivostok

While the vast majority of North Koreas’ borders are with China, there is a small 17km line where North Korea meets Russia. This North Korea Russia border is in the far north.

There is only a single bridge across a part of the Tumen River - which is basically swamp for much of the year.

(And a frozen swamp for the rest of the year.) 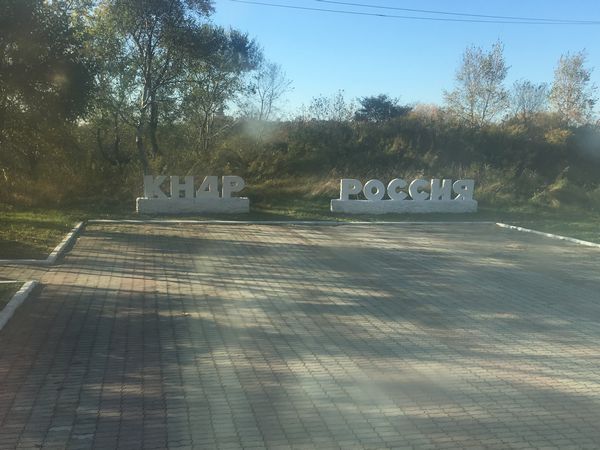 This bridge across the Russia North Korea border is rail only rather than road, so is used infrequently, not even daily.

Occasionally planks are laid on this Friendship Bridge and trucks can use it as a kind of road. Plans for a road connection exist but are unrealised as yet.

So, if you are passing in the Rason area of North Korea into Russia then the train from Tumangang Station will be the way to do it.

A short journey of only just a few km takes you into Europe and once you then pass through Russian immigration at Khasan Station you are ready to explore this area, making your way up to the regional centre of Vladivostok.

A video of Kim Jong Un arriving by train (not the same train you would use!) can be found online here. 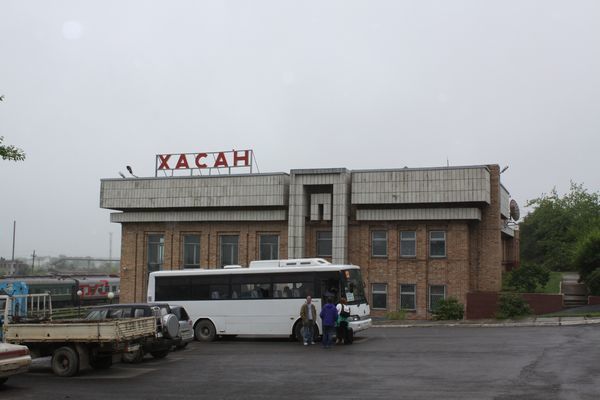 The only Russian settlements on the North Korea Russia border is the tiny town of Khasan, fewer than a thousand people live here and the main industry is of course trade between the Russian Federation and North Korea, of which there is very little. The small railway station is the anchor of the town itself. There is a bit more to this place than may seem at first though (it is rather run down to be frank), due to a battle that took place here in the late 1930s.

Battle of Lake Khasan: the lake itself is very small, but as it sits only just beyond the North Korea Russia border of what was at the time the Japanese Puppet state of Manchukou and inside what was then the Soviet Union it was a coveted area for the Japanese.

On 29th July 1938 the Japanese Army (including Koreans, Manchurians, and Chinese from the occupied areas) crossed the border and invaded Khasan, swiftly overran the Russian positions and entrenched themselves, the Red Army fought back with waves of bombers and full-frontal tank assaults, most of which were hugely costly in terms of men and material.

Eventually, a situation developed where there was no clear victor and it became clear that the conflict would spread if not checked. The Japanese requested peace and called it a draw, Russian propaganda naturally declared a huge victory over an encroaching imperial power.

The following year the Japanese tried again, at the enormous battle of Khalkhin Gol in which tens of thousands of men fought and died in a huge battle that eventually resulted in a complete victory for the USSR and their ally Mongolia. It led to a refocusing of Japanese efforts south and they were not to trouble the Soviets again.

Bonus Fact: (not to digress too much!), this battle features in the absurd but apparently true story of Korean soldier Yang Kyoungjong who was pressed into the Imperial Japanese army, captured by the Soviets at Khalkhin Gol, sent a gulag, then forced to fight for the Red Army in the defence of Kharkov, was captured by the Germans, forced into the Wehrmacht and sent to the western front and just after D-Day was captured by American paratroopers. After more POW time he was released, became an American and saw out his days in Illinois. World’s luckiest/unluckiest soldier and a guy who went from Korea to the US the hard way.

There is a small museum in the town with a simple two-room exhibit based around the battle, and at the lake itself, a short drive from the town, the Monument to the Heroes of Lake Khasan From the train station here you can get the train all the way to Europe, Moscow sits at the end of this line.

However, one place you cannot directly get to is Vladivostok (being that it is on a peninsular) so to reach there from here by train get on and head for Ussuriysk, from where you can change trains to Vladivostok, or simply take a taxi the short 90 min drive.

The best way to go is by road, head North and see some of the sights along the way.

A direct run from Khasan to Vladivostok by road takes around 4 hours, the first hour being on a very poorly-surfaced bit of road. But there are a few spots you may consider stopping along the way! 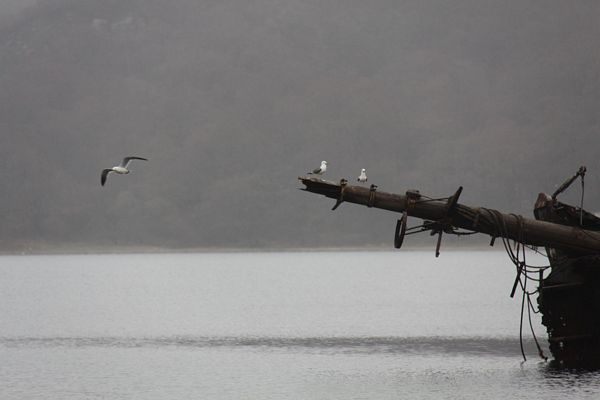 90 mins Drive from Khasan one comes to the quirky and amazingly fun small town of Andreyevka, this is home to the amazing Okean Beach Resort, somewhere that those who have just emerged from the Rason area of North Korea will find completely alien and just a little bit mind-blowing.

A beach area with rows of small huts, a main building with a nice restaurant, internet (!), and a supermarket. People drinking beer on the beach, men in tiny swimsuits, women in even tinier swimsuits, it is really the furthest from a DPRK beach experience that you could get, and a great Welcome to Russia!

For those crossing over from a trip in the DPRK. Okean is a bit like a kind of Russian Butlins (ask a British friend) and well worth at least an overnight and relaxing few hours.

There are a couple of quirky side trips that can be arranged from here too; 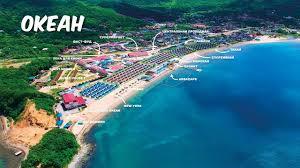 The most southern island in all of Russia, this small rock (a mere 2 square km) is inhabited mostly by one island-keeper (there to look out for illegal fishers, mostly coming from a certain close neighbour who should know better!) and a vast amount of sea birds, more than 300 species in fact (including eagles, gulls, guillemots) making this a twitcher’s paradise.

There are also all manner of abandoned and rusting WWII-era fortifications here, artillery pieces, barracks for soldiers stationed here, all to guards again more Japanese incursions. Overrun by birds and their guano these are still in relatively good shape although very overgrown.

Depending on what kind of boat you take to get here (and you need permission in advance), it can take 1-2 hours each way from Andreyevka 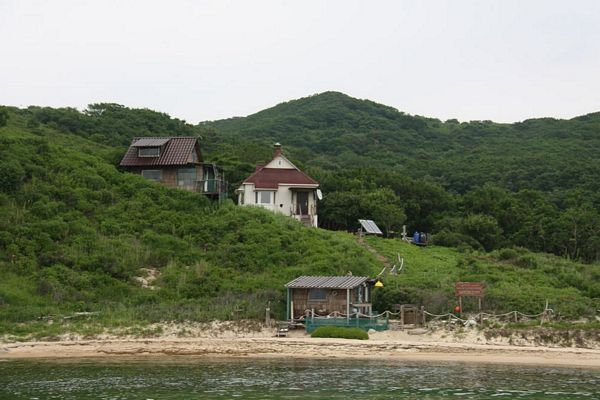 On a promontory around an hour or so (depending on road condition this may need to be done in a Kamaz) there is a small but operational lighthouse. With a hardy but welcoming (if you tell them in advance that is, the sign at the entrance reads ‘Danger, Rottweiler’ after all) crew manning this position.

As mist and fog is common here and the coast is anything but straight and even this is sill a useful point for navigation, even if most of it is done with computer wizardry rather than just lookouts squinting through the fog to see the light emitting from here. 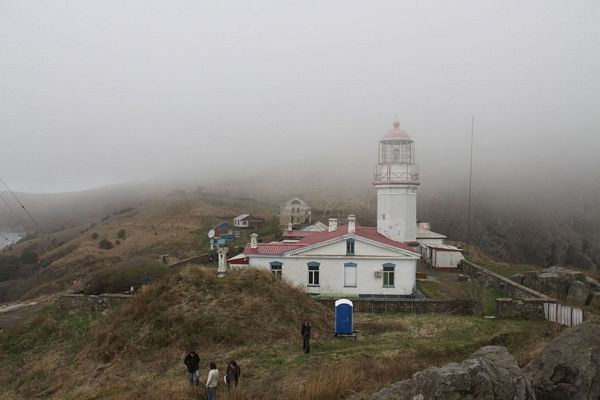 You may well want to stay here actually; it is lovely in the right season and truly relaxing! However, Vladivostok is the goal, so either head off by road another 2.5 hours or so (depends on traffic once you get up to the area of Vladivostok Airport), or take a 45 min drive further north to the port of Slavyanka,

From Slavyanka passengers boats of various types depart for Vladivostok, thus letting you enter the city in the finest way possible (although a case can be made for the Trans-Siberian of course!); by sea - up the Eastern Bosphorus, right into the heart of the city. These boats usually leave Slavyanka very early in the morning, so be sure to check in advance rather than just showing up hoping for the best! 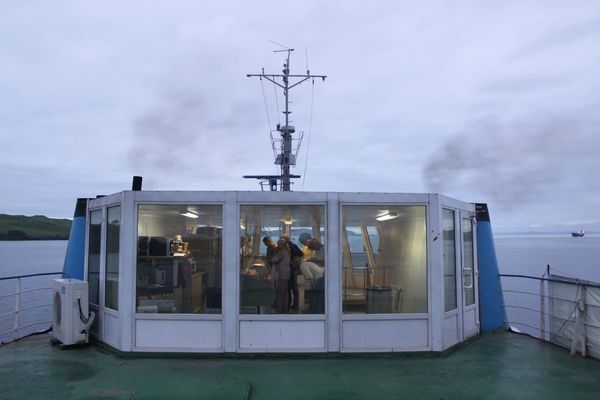 Primorsky Krai, this region of Russia, is blessed with an astonishing diversity of flora and fauna, perhaps the most famous being its big cats. Amur Tigers (commonly known to non-Russians as Siberian Tigers, despite not living in Siberia) live here, as do Amur Leopards, once the most endangered cat in the world with only 30 individuals alive.

Land of the Leopard National Park (known to all as Leopard Land) is the place to learn about these amazing beasts. This park was established to protect and revive the species in 2012 and has seen some success with the population now apparently above 100 cats. This vast reserve is a little north of Khasan and offers hiking trails, nature and photographic expeditions etc to see the huge range of animals that live in the park (tigers, leopards, lynxes, plus a huge range of birds).

This is not one of those places you will be holding a drugged leopard cub though, it is a reserve where they roam at will, if you encounter one then you can count yourself lucky.

Leopard Land is about 2 hours by road from Khasan, also 2 hours on the road from Vladivostok 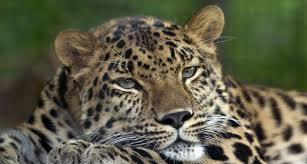 •    This is not an easy place to travel independently. It is the edge of the world in many ways and there are few taxis and not much public transport either. You cannot expect to arrive in Khasan and have a line of cabs waiting to take you where you want to go. Travelling around is bets arranged with a local travel company in advance.

•    Don’t expect many non-Russian languages to be spoken in this area either. Sure, plenty of people speak English, Chinese Korean, Japanese in Vladivostok. But not so much in the more proletarian settlements of Khasan., Andreyevka, and Slavyanka. Download a Russian language app that works offline, internet here can be spotty also.

•    You need Russian Roubles; your DPRK Won and leftover Chinese RMB is all foreign funny-money here. So, if coming from Rason simply go to the Golden Triangle Bank and buy some Roubles there, otherwise get them before you start the trip. There is an ATM at Okean Resort, and petrol stations and some shops will accept credit cards, but cold hard cash is a good backup for sure.

•    Crossing the North Korea Russia border is a truly amazing experience. Most international land borders somewhat ease into each other, languages and cultures start to merge, signs show 2 languages for a while on either side, accept two currencies and so on, there are historical and cultural links and there are people originally from each side living on the other side of the line.
The North Korea Russia border is not like that. It goes from a remote part of a very unique east Asian country directly to a poor and extra-remote part of a European Country. From Asian people to white people just like that – there is almost no mixing, no cross-pollination (no kimchi in Khasan, no Borscht in Tumangang), it is a very uncanny experience indeed, well worth the effort to make it happen! 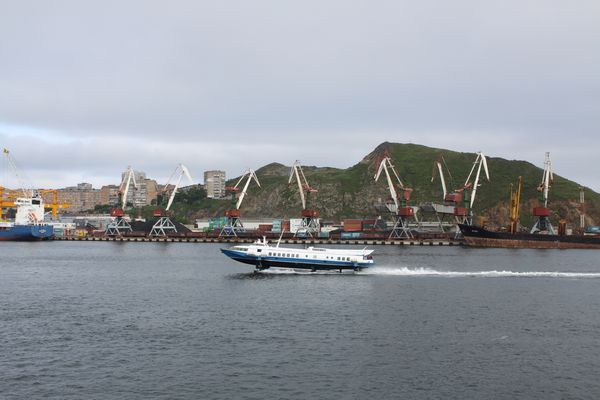