The Reunification Highway, Pyongyang to the DMZ

The Reunification Highway,
Pyongyang to the DMZ
평양개성고속도로

If you only see one highway in North Korea, it’s likely to be this one.

With the majority of tourists paying a visit to Kaesong and Panmunjom (DMZ), the only way to get there is along the Reunification Highway.

In high season, the tourist buses make up most of the traffic, but even so, this feels like a lonely road with only the occasional vehicle coming by.

The highway is 170km long- or at least, the North Korean section is. After all, this road goes to the border, beyond which it is reborn as the Gyeongbu Expressway heading south to Seoul and beyond.

It has been open since 1992, connecting the capital Pyongyang with the cities of Sariwon and Kaesong.

Heading south from the flatlands of Pyongyang, the road is straight and of reasonable quality.

As you get closer to Kaesong, it becomes a little more rolling as it winds over hills and through tunnels, and the road surface deteriorates.

There are much worse roads in the country, but as your Korean driver is liable to take this road at high speed, it can feel bumpy.

Tongil Street to the Arch of Reunification    (3km)

The road starts in Pyongyang, on the appropriately named Tongil (Reunification) Street- home to thousands of Korean families in massive brutalist apartment blocks on each side.

Look back as you are leaving the city and they fan out to each side, perfectly symmetrical and somewhat reminiscent of a billowing flag.  Sort of.

The first stop is the Arch of Reunification, which forms the de facto edge of Pyongyang just beyond the April 25 Film Studios.

After passing through the arch (or more likely and respectfully going around it) you may also glimpse the campus of PUST (the Pyongyang University of Science and Technology) over to the right- a well-equipped academic institution staffed by foreign professors.

Heading south, the city falls away, and after passing the junction for the road to Wonsan, it’s time to settle in and enjoy the countryside or- if it has been an early start- have a sleep as you pass through the farmlands of Gangnam (not that one), Songnim and Hwangju.

After an hour or so, the road begins to bear left and the city of Sariwon (pop. 308000) comes into view on the right. 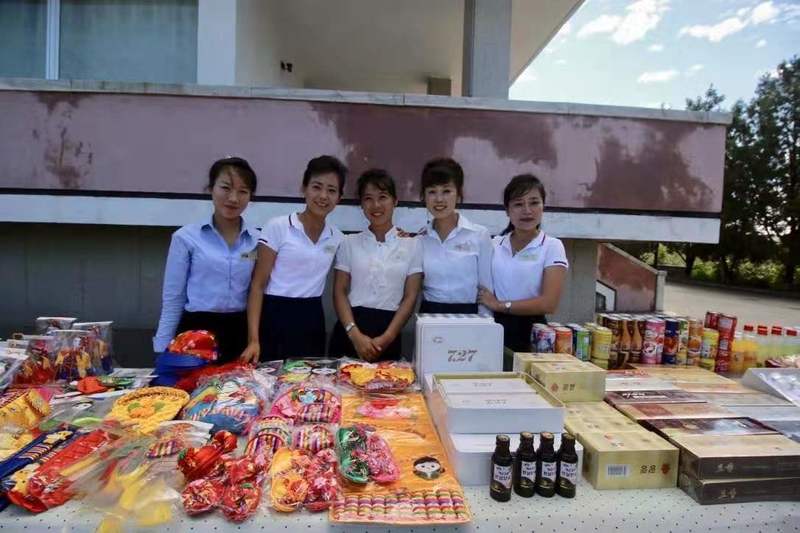 Heading on from Sariwon, the highway bears east.

Villages and towns closed to foreigners are visible along the way, along with the large lake of Sohung-ho.

The road descends into a small valley and in the distance, the unmistakable pink tea hut- formally known as the Sohung Rest House- comes into view.

Most likely you will stop here,  giving your driver time for a coffee and cigarette.

You can always get tea and coffee from the ladies who work here, but they can often also rustle up fruit, beer, ice cream and other snacks- along with standard souvenir offerings like cigarettes, ginseng, and so on.

There are toilet facilities inside the building.

Almost all buses head-on south from here, although it is possible to visit the Unjong Livestock Farm nearby, whereby prior arrangement the villagers can put on a traditional Korean mask dance performance.

The last stretch of the highway is the bumpiest, and the military presence becomes more evident.

The highway heads south-east through numerous tunnels, guarded at each end by soldiers in concealed foxholes.

At strategic points like river crossings and hilltops, you will notice large pillars at the side of the road.

These may look like monuments, but their real purpose is as tank traps which can quickly be collapsed to obstruct the highway in the event of an invasion from the south.

You will pass through a series of five checkpoints- these are army positions, so make sure to keep cameras and phones down and out of sight when stopping here.

After the last checkpoint, the road swings east.

Here you have just passed the 38th parallel- the arbitrary point at which Korea was divided in 1948 drawn by two American junior army officers who knew nothing about the country and just drew a line on a map they found in a copy of National Geographic.

The city of Kaesong (pop. 307,000) starts to open out to your left, and if you have bought a North Korean SIM card it will stop working from here onwards.

Look up at the street sign above the road as you start to descend into the city- Seoul is signposted straight ahead, just 70km south of here.

As you swing off the road to cross the bridge into Kaesong city, look to your right- on a clear day you can see the absurdly large flag poles of the DMZ villages of Kijong-dong and Daeseong-dong in North and South Korea respectively.

Kaesong to the DMZ (9km)

Leaving Kaesong behind, it’s a short drive down to the border.

More tank traps line the route- increasingly adorned with concepts like ‘independence’, ‘peace’, and ‘friendship’, but otherwise, it feels calm as villagers and farmers go about their daily business.

Over to the right, you may see the incongruous shiny buildings of the Kaesong industrial complex.

Once a significant provider of employment and a symbol of hope for the reunification of Korea as a north-south joint project, it now lies dormant and mothballed.

This indicates the end of the highway and the entrance to the DMZ and joint security area of Panmunjom.