On 27th July 2013, in a grand ceremony which was to mark the first time that new Leader Kim Jong Un appeared before the international press (a shouted and unanswered question by a British reporter was briefly claimed as the first 'interview' of The Marshal, to much well-earned derision) the newly-built Victorious Fatherland Liberation War Museum in Pyongyang was opened.

A genuinely impressive and immersive place, vast in scale and well laid-out and organised, a true claimant to be the very best museum in the country.

However, this day was the 60th anniversary of the signing of the armistice (in Panmunjom), considered to be the moment in which the Korean War ended in victory for the KPA (with an assist from the Chinese people’s Volunteer Army and some Russian backup) and this was not the first time a place had been built to display the means, method, and machines of victory, in fact, the previous location of this museum is right next door, and still stands to this day. 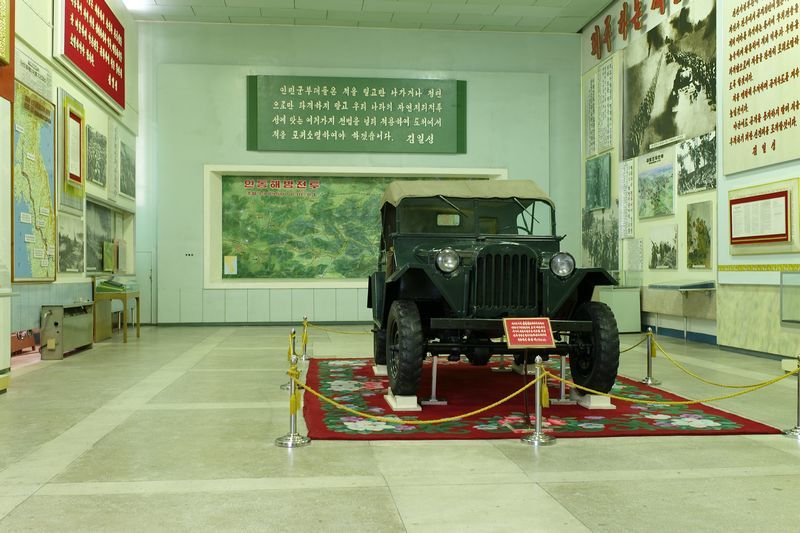 Basically right next to the current War Museum – in central Pyongyang, in the shadow of the towering Ryugyong Hotel. The car park used by vehicles to pick people up at the end of a War Museum tour now is the same one used for visitors to the previous incarnation

Completed in 1974 the previous incarnation (let us call it the old museum, as opposed to the new museum, for simplicity – there were others before it actually) is one of those grandiose Soviet-style buildings, a big grey oblong, 3 stories high but tall enough to contain many more (high ceilings inside). The kind of old-school museum that you build and then decide what to put in the almost identically shaped rooms.

A tour here was also a guided one, and didn’t include all the rooms (there were too many of them) but as with the new museum takes in the origins of the conflict, a guide in military dress (they aren’t actually in the army themselves) points to various bit of evidence, documentation, quotes with a context you might puzzle over a little, and draws a politicised picture of US aggression leading to a conflict for the ages, the levelling of Pyongyang, advance and withdrawal (‘strategic’ withdrawal, always strategic) and final victory after a grinding attritional last couple of years. All very stirring and an essential narrative to know about for anyone wanting to understand how the DPRK came to be as it is.

The old museum contained some amazing dioramas, one in particular showing the Relief of Chol Pass had a kind of Scalextric of trucks driving up a hill, bombers swooping in, a garbled recorded voice explaining what is going on - best line; “time bomb!” as a soldier larger than the trucks rushes to deposit this device over a cliff, saving the day - and so much more. (here is a North Korean song about Chol Pass) 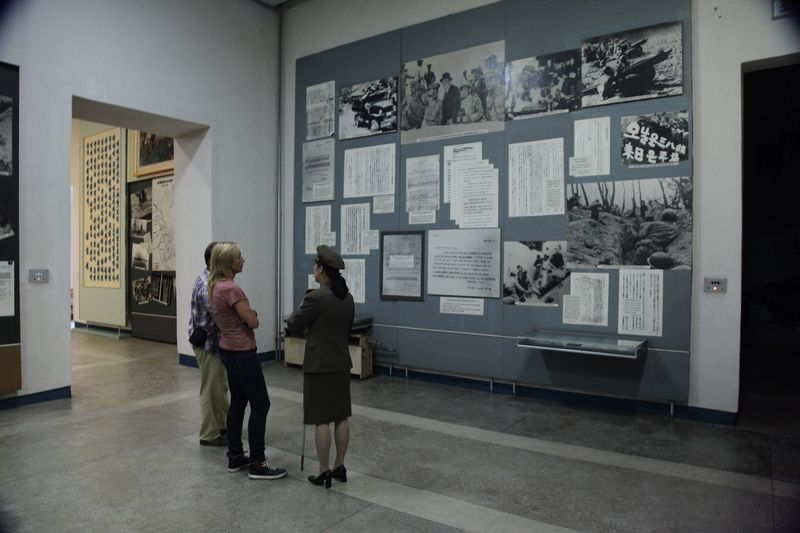 The basement was where the machines of war were kept, the very same ones that these days line the wings of the statue park leading to the new museum, which was there already in the days of the old museum too. 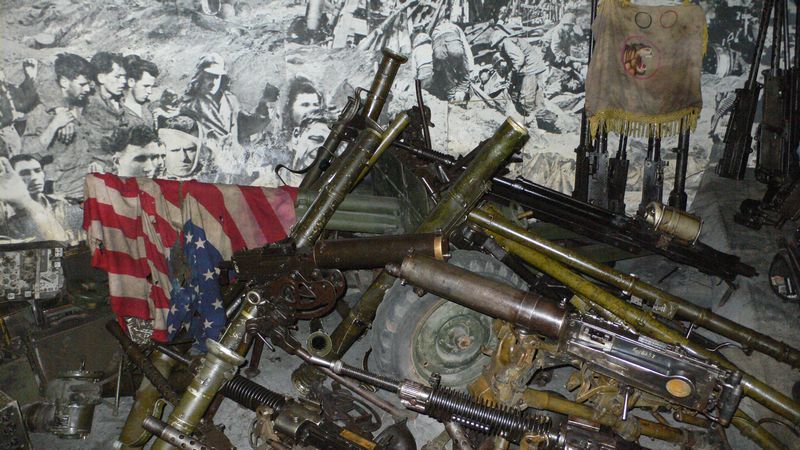 There were the Korean planes that shot down numerous enemies, heroic trucks and boats, the stump of a heroic tree that sheltered dozens of trucks from enemy bombing runs (where this is now we don’t know, honestly it was a highlight!), and then into the largest part of the basement where the small of oil and polish emanates; captured American rifles and dog tags, letters home, then tanks, APCs, planes, all manner of metallic materiel lined up here. At the end of the tour, usually about 90 mins long, visitors were taken to the part of the museum that is still in use as part of the new museum (although shined up a bit these days), the rotating 360 degree panorama of the Battle of Daejon, a really amazing piece of work by the artists at the Mansudae Art Studio (they have since made similar ones in various African revolutionary countries) – showing the KPA assault on the now-South Korean city. 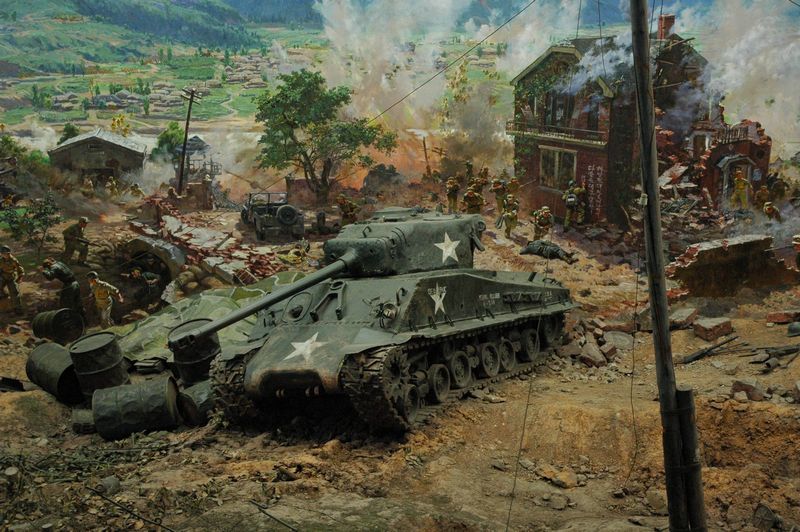 In great colour and furiously contested battlescapes; soldiers pause to propagandise liberated villagers, a teenager captures the US’ most senior General in the field while he is dressed as a private, there is a lot going on here and it was always a highlight and for regular visitors it was a great relief that in 2013 this had been kept intact.

One major difference; in the old museum you could take photos, in the new one it is not allowed. The reason for this change in policy is not clear, but it exists anyway.

There is much to admire about the new museum; it is clearly a better building, a more coherent way of telling a complex story, and a more modern and international-standard facility. But the old one had a certain musty charm and attraction, even if you could have taken everything out and put in, let’s say, material about the Koryo Dynasty and simply rebranded it without issue.

What has happened to this building since then is a bit of a mystery, but it is sitting there waiting to be used for something, we hope maybe another museum of some other fascinating part of DPRK history can open there.

Let’s look to the future with optimism and suggest that a museum to Korean reunification would be a good suggestion, when that happens! 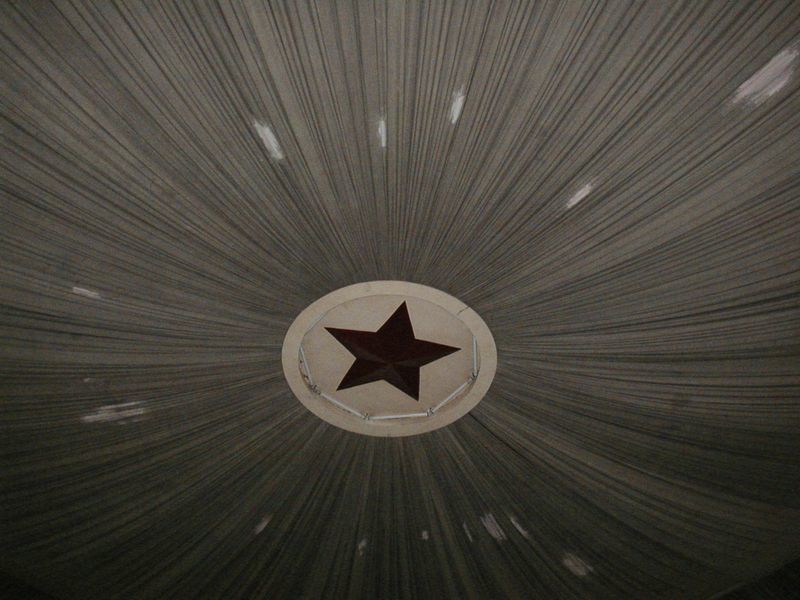