A look into North Korea's capital city Pyongyang, from 2333 BC to present.

The Gojoson dynasty was the first Kingdom to rule the Korean peninsula. According to mythology, the kingdom was founded in 2333 BC by King Dangun, a mythic godlike king.

Gojoson covered northern Korea and much of Manchuria; the capital city, Wanggom-song was potentially located on the site of modern-day Pyongyang, although some sources believe it may have been located in Manchuria.

The dynasty ended in 108 BC with the invasion of the Han dynasty. Northwest Korea governed by the Leland Commandery which had its capital city in Rakrang, Pyongyang. Rakrang is still a district name in the city to this day.

After decades of intermittent conflict with the Goguryeo dynasty as it attempted to expand into the Chinese-controlled Han commanderies, Lelang finally fell in 313 AD and was absorbed into the kingdom by King Michon, allowing him to consolidate control over northern Korea.

Pyongyang remained an important city for trade during the early years of Goguryeo rule.

In 427, the capital was moved from Gungnae (today situated on the China-DPRK border) down to Pyongyang which was considered a more suitable environment to foster the development of a metropolitan city.

It is believed that the name ‘Pyongyang’ was given to the city by this kingdom – the name translates roughly to ‘flat land’ in a sino-korean dialect. The region is considerably more level than the surrounding peninsula which historically has meant that the region is ideal for agriculture.

668: Protectorate General to Pacify the East

In 668, the armies of the Chinese Tang Dynasty crossed the Yalu River and put Pyongyang under siege with the support of the Silla Kingdom, a Korean kingdom situated in the southwest of the peninsula.

The city eventually fell and was declared the capital of the ‘Protectorate General to Pacify the East’. It remained as such until 676 when the protectorate was forced to move north to a more easily defendable region after the Silla Kingdom began to advance on their territory.

Originally the Kingdom of Silla had supported the Tang invasion of northern Korea, however, they did so having been promised territory in the conquered regions which were never given.

In the aftermath of Tang control, the city was left mostly abandoned between two kingdoms, Silla and Balhae.

The city was rejuvenated during the Koryo dynasty when King Wang Gon declared the city as the western capital of Koryo.

In 1135, a monk by the name of Myo Chong argued for moving the central capital to Pyongyang, an issue which divided the nobles of the dynasty. Some wanted to move the capital north to Pyongyang to facilitate expansion into Manchuria while others did not.

Despite a small rebellion, Pyongyang was never made the capital of Koryo.

The Kingdom of Choson was established in 1392 after the successful capitulation of Koryo forces. Pyongyang became the capital of Pyongan provinces.

The modern-day provinces in both North and South Korea are originally derived from these historical provinces – for example, Pyongan was split into modern day North and South Pyongan Provinces. During the Choson dynasty, the city was invaded and occupied by both the Japanese during the Japanese invasions of Korea during the 16th century and the Chinese during the Qing invasion of Choson until a peace agreement was made to release the city and much of Choson’s territory back to the Koreans.

The second major land battle of the Sino-Japanese War was fought in Pyongyang.

The war was primarily related to influence over Korea. The power of the Choson dynasty fell rapidly during this period and, in the aftermath of the war, the Korean Empire was declared.

This short-lived empire was annexed by Japan in August 1910. Pyongyang retained its name in Chinese characters, although was pronounced differently in Japanese resulting in the city being referred to as ‘Heijo’ during this period.

On August 25th 1945, the 25th Army of the USSR entered Pyongyang and declared the city as the capital of the Provisional People’s Committee for North Korea.

This Soviet-led body would govern the northern half of Korea until 1948 when the Democratic People’s Republic of Korea was officially formed with Pyongyang as the capital city.

Not long after however, the city was almost entirely destroyed after the outbreak of the Korean War. The city was occupied by US and South Korean forces in 1950 but was eventually recaptured.

In 1952, the city was targeted by over 1000 UN aircraft during the largest bombing raid of the entire war.

The city was rebuilt quickly after the war with help from the USSR and China.

The capital was constructed in a notably soviet style with stark Stalinist architecture dominating the skyline.

This style still remains in the city and has only recently begun to be replaced with modernist architectural styles; examples of this modernisation include Ryomyong Street and Mirae Street.

The city has served as the capital of the DPRK since 1948 and has grown to encompass over 3 million people. It is the oldest city on the peninsula and represents the heart of the modern DPRK 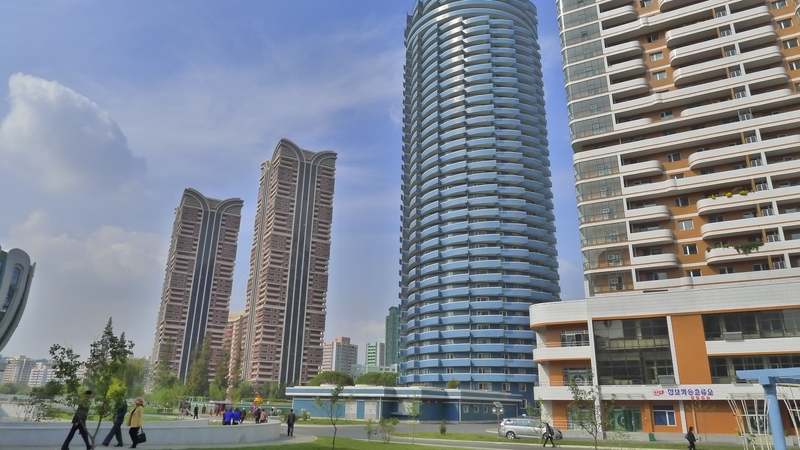